Ehud Barak's ultimatum passes and violence continues to mount between Israelis and Palestinians. 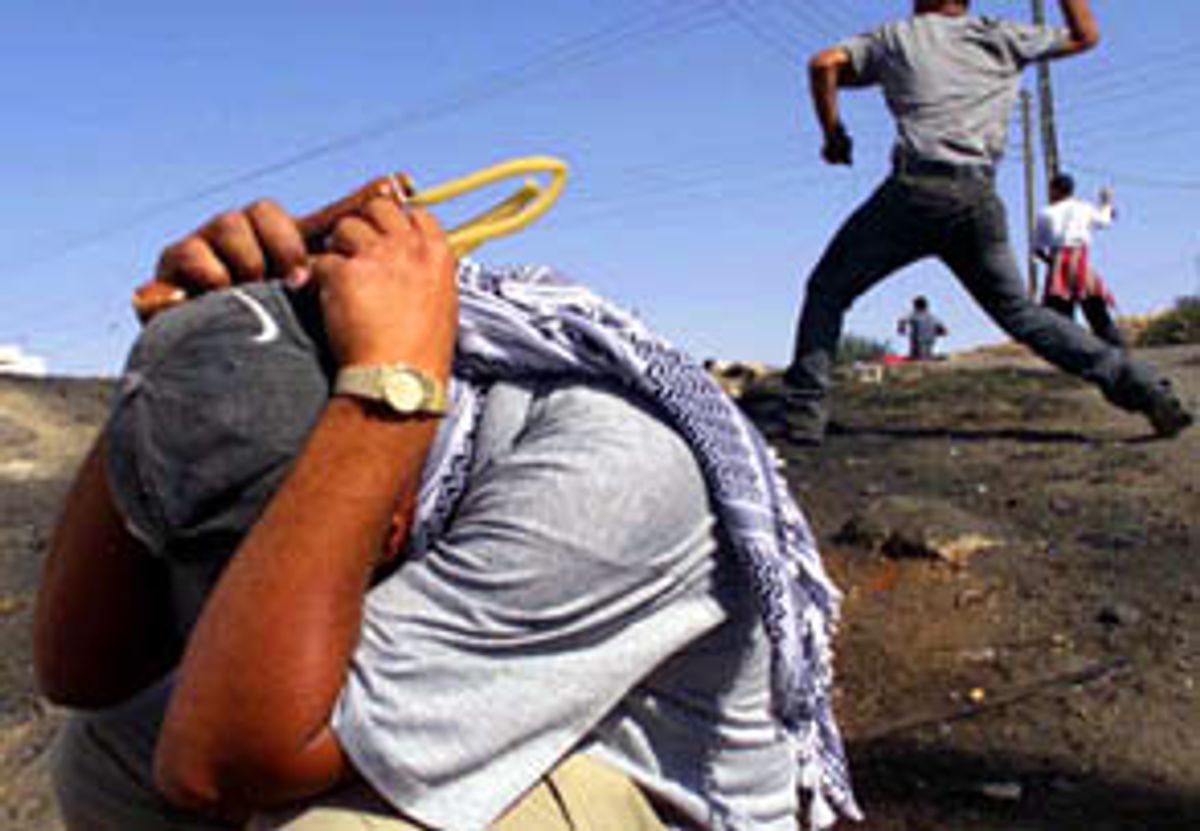 It was an unusually tense Yom Kippur.

The Day of Atonement, when, according to Jewish tradition, God seals the fate of every person for the coming year, coincided with the last hours of a deadline set by Israeli Prime Minister Ehud Barak for Palestinian leader Yasser Arafat to quell the Palestinian uprising or bear the brunt of full-fledged Israeli force.

On the most solemn day in the Jewish calendar -- when people are supposed to fast, say prayers, stop driving and turn off their TVs -- the cacophony of police cars, ambulances and helicopters disturbed the peace. Clashes between Palestinians, Israeli security forces and Israeli settlers raged on in the West Bank and Gaza. And Jewish residents of Upper Nazareth, the town of Jesus' youth, went on an anti-Arab rampage that resulted in the deaths of two Israeli Arabs.

An Israeli settler and yeshiva student, Hillel Lieberman, whose family claims he was the second cousin of Democratic vice-presidential candidate Sen. Joseph Lieberman, was found dead in a cave near the Palestinian town of Nablus. He had been shot five times. And in Ramallah, Palestinians claimed Jewish settlers brutally tortured and killed 36-year-old farmer Issam Hamad. The killings brought the toll of 12 days of violence to 89 deaths.

Intense rounds of high-level diplomatic activity by the United States, Russia, the European Union and the United Nations are now under way to prevent the clashes from spiraling into a full-blown regional war. U.N. Secretary General Kofi Annan flew in Monday to meet with Arafat and Barak in a last-minute attempt to defuse the situation.

"Time is short, the stakes are high and the price of failure is more than any of us can afford," Annan told reporters gathered at a press conference in Tel Aviv.

As Barak's deadline lapsed Monday night, bringing no notable change on the streets, it became clear that the fate of the Middle East would still be turbulent for some time -- a fact not lost on the Israeli prime minister. Following a cabinet meeting that lasted well into the night, Barak announced that the ultimatum he issued would be prolonged by "a few more days" while officials pursue diplomatic solutions. The decision drew intense criticism from the right.

But the chances of resuming substantive peace negotiations in the near future appear slim as the mood on both the Israeli and Palestinian sides becomes more stridently bellicose by the hour.

"Many of us once again believe that everyone is against us, that the last straw has been broken, that all attempts are futile and that only force is left," wrote Hemi Shalev in the Israeli newspaper Maariv. "Many are once again convinced that violence is the only language understood by all," Shalev wrote.

Blamed for igniting an explosive situation through unnecessary provocation, Israelis have felt besieged from the start of the Palestinian uprising. On Saturday, the United Nations Security Council nearly unanimously condemned Israel for "the excessive use of force against Palestinians" in dealing with the riots (the United States abstained from the vote). But the U.N. resolution only added to what Israelis perceive as a worldwide pro-Palestinian bias that is throwing the Jewish state back to the days of international isolation.

One media mishap in particular has reinforced this belief. A caption on a widely distributed Associated Press photograph last week incorrectly identified a bloodied teenager as the victim of Israeli police brutality when, in fact, Tuvia Grossman, a Jewish student from Chicago, had just been dragged out of his taxi and badly beaten by a Palestinian mob. The mistake was unintentional -- committed by a harried Israeli employee -- but it was read by Israelis as proof of the media's one-sided view of the clashes between Israelis and Palestinians.

"They don't let Jewish people be strong," said Dan Ravital, a computer analyst who prayed on Yom Kippur at the Western Wall for the improvement of Israel's world image. "They prefer the image of the Holocaust, of the Jews standing like this against a rifle," he said, raising his arms in a posture of surrender. "I want the world to understand us. We were attacked -- we protect ourselves," Ravital said.

The images of Palestinian mobs armed with crowbars looting and burning Joseph's Tomb, a Jewish shrine in the West Bank town of Nablus on Saturday, just moments after Israeli soldiers evacuated the outpost and in spite of official Palestinian promises to protect the site, shocked even the most left-wing Israelis.

Other Israelis concluded that it was time to "take the gloves off" and adopt the methods of their enemies. Without waiting to see whether Barak's 48-hour deadline would have an effect on the level of violence in the streets, Jewish Israelis across the country began Saturday to take the law into their hands. Jewish youths threw stones at Palestinian cars in East Jerusalem. Mosques were attacked in Tel Aviv and Tiberias, and well-armed Israeli settlers morphed into roaming vigilante groups in the West Bank.

A large vigilante attack described by some as having the characteristics of a "pogrom" launched by Israeli Jews against Israeli Arabs in Nazareth on the eve of Yom Kippur was the most spectacular sign of this rising fever. Close to 1,000 Israeli Jews, some of them armed, descended on their Arab neighbors with the intention of torching the house of an Arab member of Parliament and terrorizing people in an Arab neighborhood. The Israeli police intervened to disperse the mob with tear gas and rubber bullets. Two Arab Israelis were killed by live ammunition that may have been fired by Jewish civilians (the police are denying responsibility), and more than 40 were injured in the clashes Sunday.

On a political level, unrelenting Palestinian attacks on Israeli outposts in the occupied territories -- combined with the kidnapping on Saturday of three Israeli soldiers along the Lebanese border by the Islamic guerrillas of Hezbollah -- have convinced politicians across the spectrum that now is the time to put differences aside and join Barak in an emergency war cabinet. Discussions with various party leaders are under way -- first and foremost with Ariel Sharon, the hawkish opposition leader whose visit to a shrine held sacred by Muslims and Jews sparked the current wave of violence on Sept. 28.

"The peace process divided us, between leftists and rightists, secular and religious," said computer analyst Ravital. "But Arafat's mistake is making us much more close." A member of Parliament affiliated with Barak's once-dovish party declared "today we are all right-wing. It is the end of Oslo. The State of Israel and the IDF must not become a paper tiger."

Indeed, Sharon's entry into a national unity government -- perhaps as foreign minister -- would be interpreted by the Palestinians and the Arab world as the abandonment by Israel of all peace efforts.

Not that the Palestinians are ready to swap the language of force for an olive branch these days either. On the contrary, Hezbollah's spectacular capture of three Israeli soldiers has comforted some Palestinians in their belief that "the only way is the Hezbollah way."

According to reports from Beirut, the capture of the soldiers on patrol was carefully orchestrated. Fifteen busloads of Palestinian refugees showed up at the Lebanese-Israeli border, tried to scale the flimsy border fence and staged a violent demonstration (in which two men were killed by Israeli fire). The riot diverted Israeli army attention, and allowed Hezbollah to swiftly seize hostages the organization has been seeking for months. The three soldiers are now expected to be swapped against Lebanese prisoners that Israel has held without trial as bargaining chips in some cases for as long as a decade.

Since Israel pulled its troops out of southern Lebanon in May, ending two decades of military occupation, Palestinians have embraced the idea that only a Lebanon-style armed resistance will lead to true independence.

"No one here counts on the Arab regimes, but they know -- with their eyes closed -- that they can count on Hezbollah to masterfully plan an operation and then carry it out," wrote Palestinian journalist Muna Muhaisen in her public diary on Sunday. "True, two Palestinian refugees in Lebanon had to die in order for the operation to succeed, but such is always the case when a people are fighting a war for freedom, for existence. Death and destruction have to pave the way."

Echoing the appetite for martyrdom found among traumatized Palestinians, Muhaisen concluded the day's entry with steely words of determination: "We all feel that this fight this time around is our very last with the Israelis. After 52 years of resistance, dispossession and occupation, everyone is ready to either witness the total destruction of the land of Palestine, or the emergence of a fully independent Palestinian state."

That final battle against Israel, the only high-tech superpower in the region, would almost certainly be a lonely, devastating and futile fight, since neighboring Arab countries have been reluctant so far to give the embattled Palestinians more than medical and moral support. That may change when Arab nations meet for a summit in Cairo at the end of October. But any all-out war is unlikely.

The Yom Kippur War of 1973 started with a surprise attack on Israeli outposts by Syrian and Egyptian armies, outfitted with weapons from the Soviet Union. By contrast, Syria's army is now anemic and obsolete while Egypt, a prime recipient of American military and economic aid, made peace with Israel in 1979 and has no apparent interest in changing the balance of power in the Middle East. According to Syria's foreign minister Farouk Ashara, "none of us wants to launch a war against Israel."

But with emotions running high on both Israeli and Palestinian sides, it may be just as difficult to launch a new peace.