Reading on the train

I use my book choices to attract women. Ciline got me a girl with pink hair. 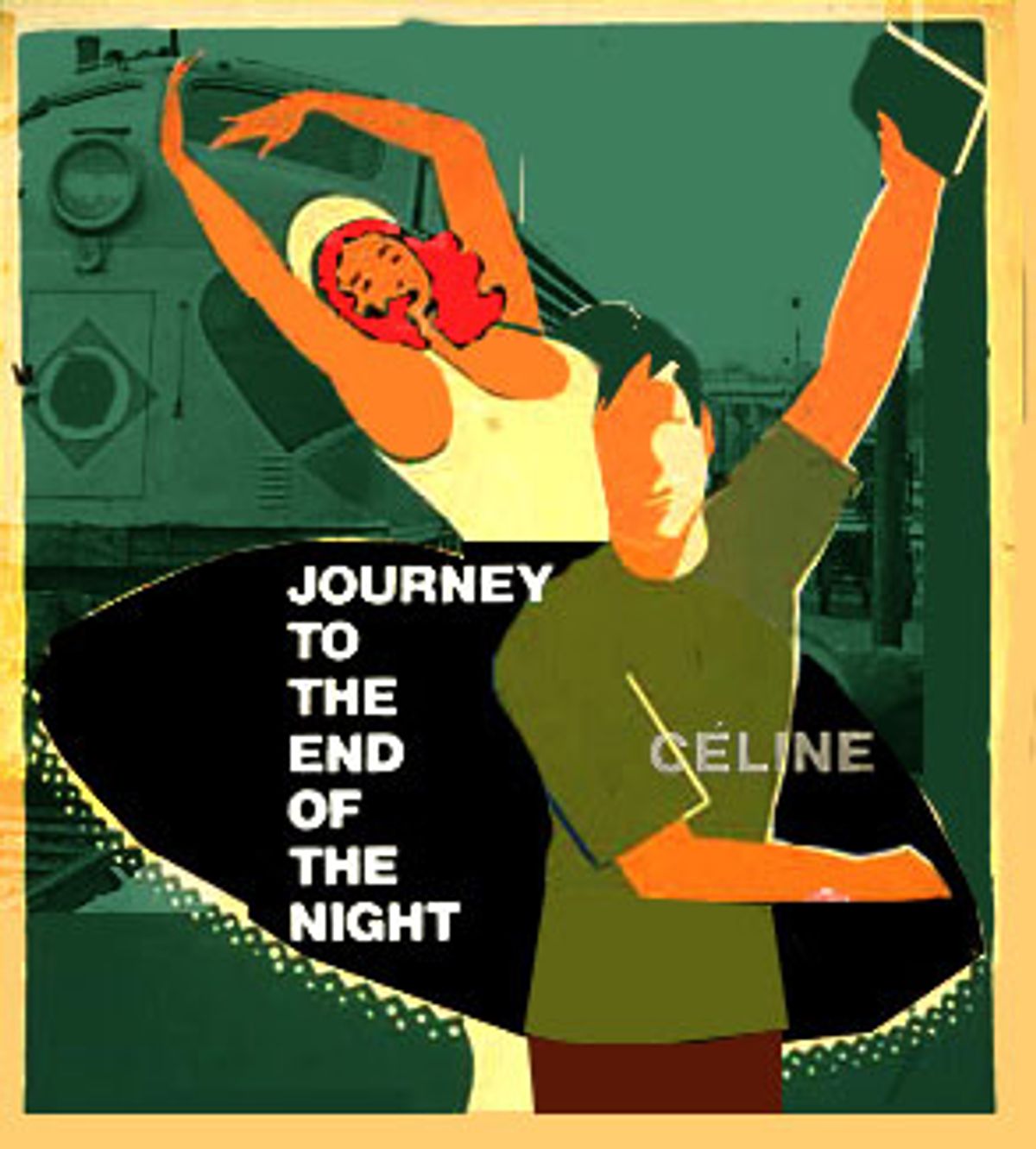 I always have a book with me. It's one of those must-haves, like my train pass or my apartment keys or a couple of condoms. That is, there will be a moment every day that I will have the opportunity to use all of these items.

(This is certainly true for everything but the condoms, but I'm an egoist and, as with any piece of literature, I'm trying to sell myself to the reader. Here I am saying that I'm a highly desirable, adequately sexed young man in the city. Truth, thankfully, is a topic best left to philosophers and since I am a something else, let's say that everything is true for a little while and we can all leave each other a little more satisfied.)

Sometimes the train pass, the book and the condoms work magnificently together, as they did one spring day, but it was my book that really did it, I think. Thank you, Louis-Ferdinand Ciline. You may be an insane, pessimistic and dirty Frenchman, but carrying your book got me laid and for that I'm willing to someday try to finish it -- maybe, if there is nothing better to read.

Anyway, it was the first day of my second spring in the city. The wind was blowing warmly, and I felt a little bit like a Disney cartoon as I walked to the train on a Saturday morning, with a book in my hand and a smile on my face. Everything was beautiful in the bright sunshine, with women walking around not wearing much, or wearing tight shirts. And though the wind was warm, it was still a bit chilly, so all around the city young women were displaying the full curves of their breasts and the outline of their erect nipples.

People like to pretend that we're more than monkeys, but that's a lie. It's just that we demonstrate the glory of our reproductive organs in other ways than the redness of our baboon ass or the musty smell of our crotch.

And then I was on the train. I was standing, smiling because there were so many mostly naked women about my age looking around and smiling, and I would try to read my book. But sometimes -- no, I'm sorry, most times in the springtime and also the rest of the year -- the curve of a woman's body is infinitely more sublime than words strung together by a foul-breathed writer who's far away and probably dead. For instance, I, as a young writer, could write at length about the beauty of a girl's skin in the sunlight, soft and glowing, curved like the landscape, the color of wheat in the fall, or the color of a plum, dark and soft but also hard, or like that of coffee with cream, or all of those colors. And then it is pink and then it is red. I could write and I could maybe write a beautiful sentence, something that swoops down like the plunge of a woman's back arched in, let's say, the blue light from a street lamp. But it would be just a sentence, a construction of syllables far less melodious to the eyes than the viewing of the swerves and curves of a woman alive and before you.

So I would look at my book, "Journey to the End of the Night," and I would read some sentence about something, just trying to, I don't know, conceal my glee or hide behind furtive glances, and also kind of enjoying the book, in a sort of roundabout kind of way. So I was standing and reading and looking when one of the women came and asked me many questions, concealed as a simple one.

"Are you reading that in the French?" she asked.

"Oh, uh," I said, looking at her, at her pink hair and her vintage stylish clothes, and I read her story and our story there. I knew it already, but anyway, a good story can be read again and again and ours wasn't all that good, but I always liked the ending because it meant that I got laid. It was springtime and I could feel my blood -- and you know how that is.

"No," I continued, "I studied Spanish literature, but I wish I knew French better." Except for the "No" these were all lies. But that's OK, she wanted to hear them and to be asked the next question, which was about her, so she could talk about herself.

"No," she said, "but I want to. I mean, my professor told me that it's best read in the French, so I'm waiting until I know French a little better until I try it and ..." She continued talking and I smiled and nodded and she asked me some question like:

"What do you think of Hans Hoffman?" And it began to be one of those flashcard sessions where she would throw out some goddamned name of someone you always have to talk about in college and I would offer the appropriate commentary. For example:

"Oh, I don't know, he makes me feel like a fish," which is the correct answer because it bewilders them.

"Sure," I probably said, and soon it was time for me to get off the train and she gave me her phone number and I said I'd call.

I called the next day and it was on a Sunday night that we met for drinks at a bar where there were others like her and, I guess, like me -- no, not like me because I am convinced that I am different, and it is a good feeling, so I believe in it. Anyway, it was one of those bars where if you look, you know, normal or, rather, mainstream, you look out of place, and yet somehow they all seemed to look alike and oh, never mind.

We sat over some drink, for which she used, I remember, the expensive brand name when asking for it, like, "Umm ... can I have a Stoli and tonic?" or "Uhh ... can I have an Absolut martini?" And I felt like just walking away but it was springtime and I told you already about how I could feel my blood, so I smiled and ordered my Budweiser, and when I noticed that many others were also drinking Budweiser I wanted to change my order, but it was too late.

She talked and talked and I said some things and, of course, because it was the purpose of our meeting, the discussion turned to sex. It can be summarized like this:

"Some sex would be good right now. Were you often stung? My feet were often sore."

"Yes, I was stung more times than can be counted. Also, I would like to have sex with you tonight. You must be very flexible."

"Yes, I am very flexible. Let's leave." She drained her whatever drink and grabbed her vintage leather coat, which was the same color as mine.

And we were at her house, and she was undressing, and I was sitting on her bed watching her, watching her fold her clothes, and her hair was still pink in the blue light coming in from the street, and she was thin and flexible, and it was nice, feeling her, tasting her, being inside her for a while. It had been a long and frustrating winter.

But she had shaved her pussy for our date, and I would like to say that this is something I appreciate, a nice gesture, you know? But I think that if you're going to spend the time to groom yourself like that, you should groom yourself well, for a misplaced patch of errant pubic hair really disturbs the aesthetics of a vagina. It's so goddamn disconcerting and it's so godawful, and I'll be honest that when I think about that night, it is of that which I will think -- of the small oblong patch of longish pubic hair in the upper left-hand corner of what should have been her triangle.

I woke up in the morning in her bed, the sheets smelling nicely of girl things and the sunlight spilling in off the avenue, an early morning in the springtime with a pink-haired fake ballerina.

We woke up together -- and did we make love again? Probably. It is an early fall morning now as I write this and I can't really remember everything.

Walking home that morning the air smelled of car exhaust, of course, and of fried chicken, strangely, but also of the springtime, of the rains that would come and the flowers that were blooming, and fuck, the sun sure was yellow. The air was cool and crisp and, really, I didn't notice the smell of the exhaust and the chicken so much. Mostly it was the flowers and the rain I smelled as I walked home. I passed some young black kids who were smoking a big fat blunt while strolling slowly to school. They looked at me and I at them and I took a hit, passed it to the left and walked with them for a while. It wasn't something that Ciline would have done, and it made me happier when I realized that. We laughed and smiled and I told them I'd see them later before I turned off to head home, to put on the Clark Kent and get to work on time. I had to be in my cubicle by 9. It was very important. It was Monday.