Throwing curveballs at the swing states

On the eve of debate No. 2, Bush offers "Big Relief" while Gore peddles tax credits. 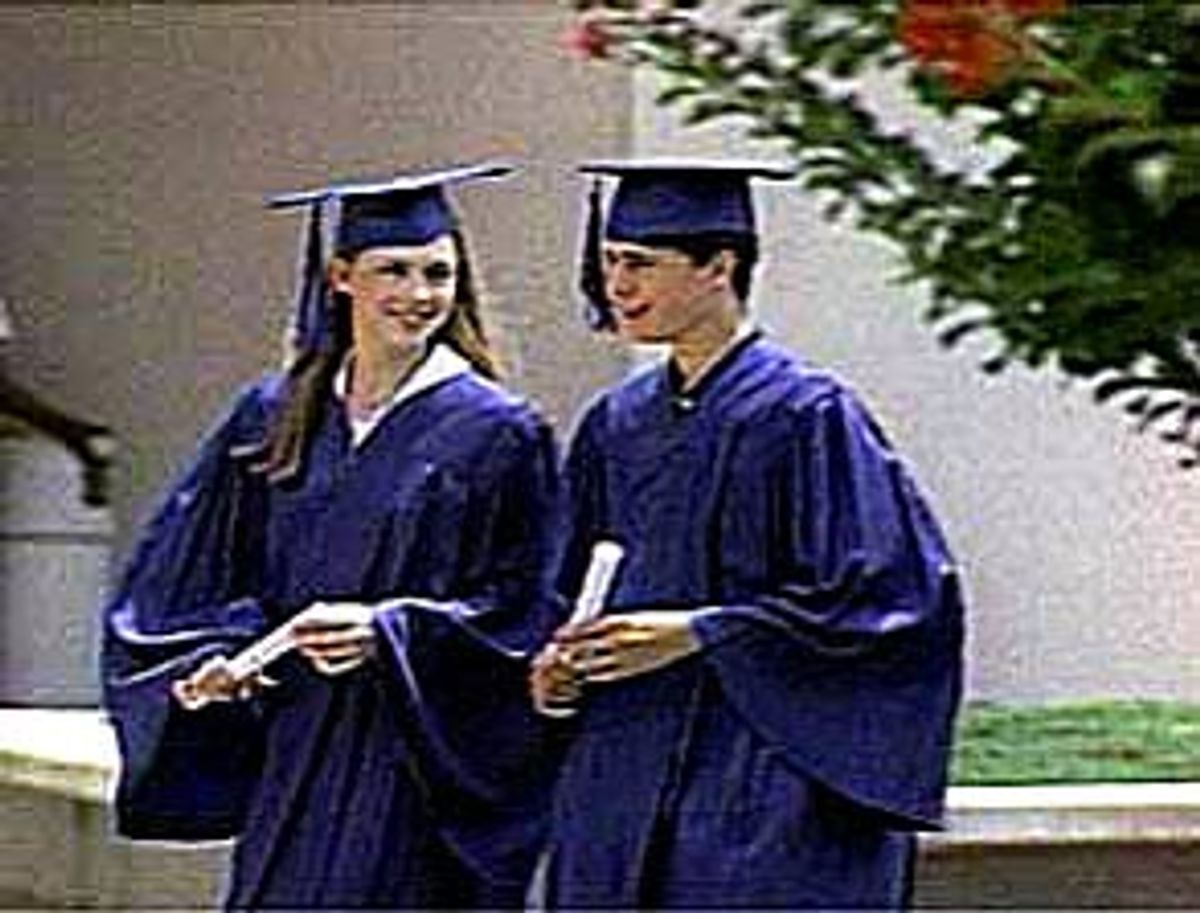 Both George W. Bush and Al Gore have seen their poll bounces go mountain high and fade valley low. Now that they've reached the last month of campaigning, each candidate will be cautiously moving to seal the deal. Gore is hoping to do that by reinforcing the populist themes of the convention, including the proposed tax credits for higher education featured in the ad "Training." The Bush team hopes to show a superiority in fiscal policy, highlighted in the new "Big Relief vs. Big Government" and "Goregantuan" spots by the Republican National Committee. These commercials are targeted at swing states. But Salon's political ad panel claims they miss the point.

Richard Blow is the former executive editor of George magazine and is currently writing a biography of John F. Kennedy Jr.

Mark Frisk is a senior producer at Ogilvy & Mather in New York.

"Training" by the Gore campaign.

Pendas-Smith: Likable, easy to get and feels good. It sets up the proposition [that] big business gets a break, let's give the little guy a break too. It really reinforces that Al Gore is for working families. It's positive and gets the point across. I'm not exactly sure how it'll be funded but that's OK because you want hardworking families to achieve good things -- like education -- it's the American dream, right?

I think most people can relate to hardworking middle-class families regardless of their income. Even if you're financially secure now, you probably came from a middle-class or working-class family and can relate to the difficulty of paying for college. Also, most boomers are probably facing the daunting task of paying for a college education. I think it will resonate with voters and cast a halo of "goodness" across the Gore campaign.

Blow: Sometimes I wonder if Bill Clinton looks at Al Gore and gets depressed. Because while Clinton refashioned the Democratic Party -- he and Gore were New Democrats, remember? -- Al Gore is doing everything he can to restore the party to its special interest ass-kissing days of, say, 1984.

This ad begins with the increasingly tiresome swipe at Bush/Cheney's ties to big business. (What "high-paid executives" do you think that announcer is referring to, anyway?) Gore needs to learn that Americans won't hate Bush and Cheney simply for being rich. If they're crooked, then we'll hate them. But otherwise, we can live with their wealth.

Then Gore trumpets his plan to make $10,000 of college tuition tax-deductible. It's craven and intellectually dishonest. Sure, college is really expensive, and we'd all like a government handout to help pay for it. But lots of things are expensive. New cars often cost more than a year of college, and we don't see the government offering us tax breaks when we buy them. By Gore's logic, I should get a tax deduction every time I buy a book.

Gore is opposed to school vouchers, incidentally, because he says they'll be bad for public schools and it's wrong to have taxpayer dollars support private schools. He's right on both counts. But tax deductions for college tuition would do the exact same things. With their new tax deductions, some students would surely abandon public ones for now-affordable private ones. Why is that OK for tax deductions but not for vouchers? It isn't, unless you're kissing some serious ass.

Koffler: This ad is bad in many of the typical ways political ads are bad. Expected music, visuals, theme, etc. It's one more political ad that seems to assume people are just sitting there dying to watch it and can therefore offer nothing compelling to make you stop and take notice.

But then this ad does something tough for political ads to do -- it sinks to a whole new loathsome level. The ad is supposed to be about Gore making $10,000 of your tuition tax-deductible. Which is a good thing -- unlike most political ads it gives you a single thought to take away. But it is worded in such a way that makes it sound like they're going to give you $10,000. Take a look at the words in this part of the commercial:

"$10,000 of college tuition tax deductible every year to help middle-class families send their kids to college."

The ridiculously awkward construction of this sentence is clearly misleading, particularly to someone not paying full attention -- like most commercial viewers. I would find it hard to believe that the people behind it did not know exactly what they were doing.

To me this is far more egregious than any subliminal advertising crap. It purposefully and dishonestly tries to mislead the viewer. For a candidate oft maligned for lying and manipulation of the truth, this ad does not help dispel those notions.

Sandoz: The big question I have for the creators of these ads is the same one I had last month: Exactly who do the campaigns think will pay attention to these? Look at the environment they're running in. It's irreverent, bright, loud and, for the most part, funny. Then these things come on, and it feels like your grandfather has stepped in the room to speak with you about the importance of oral hygiene.

That being said, I think the tone of these ads is considerably less confrontational. There now seems to be an underlying calm that makes each of the candidates seem less desperate.

The Gore ad is simple, single-minded, competently produced and makes a clear point of one of his campaign pledges -- a tax deduction for college tuition payments. Unfortunately, it is also about as exciting as watching your faucet drip.

Frisk: In noting right at the top that corporations can deduct the costs of employee education, Gore's people are onto something worthwhile. Gore comes across as a guy who wants to level the playing field a bit, and this example of one of his ways of doing it should appeal to the average family in its basic simplicity. It's a sensible feature to highlight.

Ten thousand dollars is a lot of money to most people, but it's also a realistic amount of money (unlike the $2.2 trillion referenced in the RNC ad, which is rather hard to conceptualize). People might have an easier time relating to the figure in the Gore ad.

I'm a bit tired of the people montage routine, though. I wish they could come up with something more visually exciting. And Gore does sound like a bit of a drone, but at least he's depicted as being out in front of people, making concrete offers and being articulate.

"Goregantuan" and "Big Relief vs. Big Government" by the RNC.

Pendas-Smith: These two ads are mean-spirited and evil. To accuse the vice president who's been in office for the most sustained economic prosperity in modern times of destroying it is just plain stupid. I don't buy it. Plus, talk about "fuzzy math"! It just seems too simple an equation to make such a loaded statement.

Blow: Maybe the RNC thinks that voters equate boredom with credibility, because these two Bush ads are really boring. Are they credible? Well, that depends on whether Americans believe either candidate when he starts questioning the other candidate's math. After the first presidential debate, when numbers were flying like spitballs, I'd guess not. After so many charges and countercharges, you just think they both failed algebra.

What these and Al Gore's ads do make clear is that neither candidate believes in anything enough other than promising whatever it takes to win. The resulting policy schizophrenia is getting bizarre. In the same ad in which Bush slams Gore as fiscally irresponsible, he talks about his proposed tax cuts of 55 and 100 percent. Fifty-five and 100 percent? It's just too weird.

Sandoz: The RNC ads are probably more attention-getting just because of their starkness, although they are also quite misleading. They talk about Gore's budget plan spending $3.2 trillion, but then add -- almost as an afterthought -- that this amount of money would be spent over the next 10 years. Since under the best scenario for Gore he could only be president for eight years, blaming him for 10 years of spending seems a bit unfair. Shouldn't we be talking about what he will do in the next four years?

I think neither ad will have much effect on the voting public.

Frisk: In a direct side by side comparison of these ads, I'd have to give the edge to the one from the Gore camp.

The mathematical approach of these RNC ads is somewhat ironic, inasmuch as the GOP candidate seems a bit challenged in the numbers department. In any event, the ads do a better job at explaining the Bush plan than Bush himself does, so in that limited sense I suppose they're successful.

Beyond that, however, the simple words and charts on white background environment has a bit of a fine print kind of feel, a sensation helped along by the sheer presence of all those numbers (not to mention the actual fine print itself!). Talk about your fuzzy math! It's supposed to be hard hitting and factual, but it all falls a little flat, at least to me.

The bit about the projected surplus of $2.2 trillion working out to $8,000 per American is disingenuous. "You mean to tell me George W. Bush is going to give every American $8,000? Well, shoot, where do I sign up?" Reminds me of that recent Mike Luckovitch cartoon, the one where, during the debate, Gore is spouting an incomprehensible stream of numbers and equations and Bush responds, "Me got big tax cut. Everyone get cash!"

What can I say? I get the feeling someone's trying to sell me a bill of goods. These spots are a little too smooth, a little too slick. But that's just me. These ads could hit the right chord in some undecideds, but ultimately I don't think they'll serve to sway too many people in that category. I certainly don't think they're going to convert anyone.