George W. Bush smirks and fibs his way to what looks like a victory over an opponent so shackled it looks like he's second-guessing his every move. 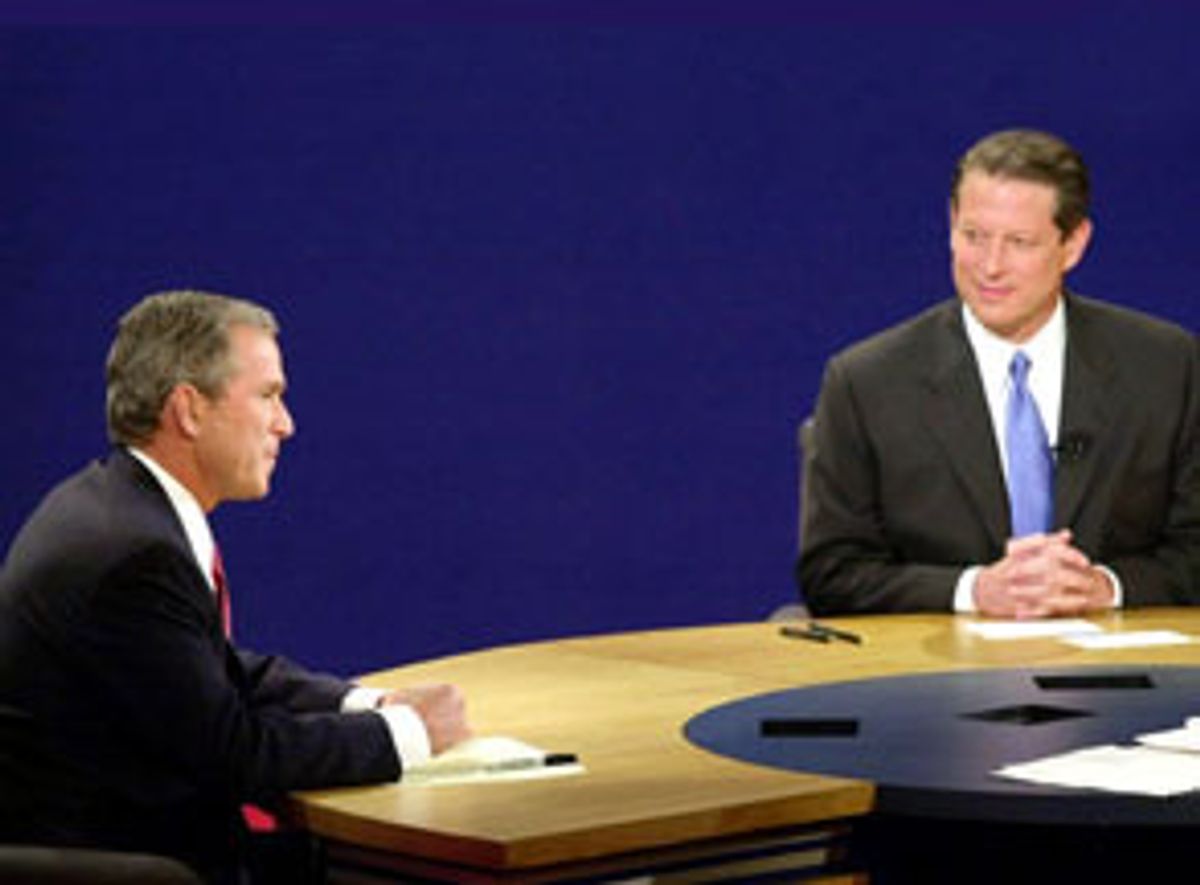 Of the two chatterers taking part in the polite cocktail party discussion Wednesday night at Wake Forest University, Gov. George W. Bush had to be seen as something of a winner. He excelled in the round-table, conversational format he wisely insisted upon -- and that Gore spinsters blamed for their man's paltry performance in this, the second presidential debate.

But much of Bush's success wasn't his doing. Gore -- chastened from a week of media sniping about his performance in the last debate, particularly his condescending sighs and factual inaccuracies -- seemed like a henpecked husband whose wife had insisted, before the party, that he remain civil.

"Gore didn't seem to have any strategy," said Bush media consultant Stuart Stevens. "His strategy seemed to be to just be nice."

In that, count me as a voice against the new civil Al Gore. He allowed Bush to get away with murder.

It's possible, of course, that -- as happened with Gore last week -- Bush might win the night but lose the week. Because beneath the polite facade gurgled many a Bush factual error, a blurred issue and a dodged question that could leave his campaign staff spinning wildly for the next week.

Like, for instance, Bush's explanation of why Texas doesn't need added punishments meted out to murderers who also happen to be bigots - as provided in "hate crimes" legislation. Referring to the black man brutally dragged to death by racists in East Texas, Bush said, "The three men who murdered James Byrd, guess what's going to happen to them? They'll be put to death. A jury found them guilty."

"It will be hard to punish them any worse after they get put to death," he went on emphatically. "In this case we can't enhance the penalty any more than putting those three thugs to death."

Perhaps -- but only two of Byrd's murderers were sentenced to death; the third received a sentence of life imprisonment.

Does this factual glitch signify a hole in Bush's rationale against the need for a hate crimes law? Does it indicate he isn't exactly on top of things for a governor who holds the national record for the most prisoners put to death in any one year, in 1997 -- a record he stands to break this year?

Whether the media will pounce on this as they did on Gore's stupid factual inaccuracies in the first debate is a big question. That Bush seemed presidential, seemed something of an equal to Gore candidate to candidate, might trump substance. After all, who would have speculated that Bush could more than hold his own against Gore in 40 minutes of foreign policy discussions?

"Look, [Bush] is an endlessly charming man," acknowledged Gore spokesman Todd Webster. "He's engaging and witty ... but that doesn't mean that he should be president of the United States."

Before the debate, Gore strategist Tad Devine joked that his staff forced Gore to watch -- eyes held open in "Clockwork Orange" style -- a "Saturday Night Live" skit from the past weekend that made fun of the last debate, depicting Gore as an obnoxious and pompous ass. After the debate, one wondered whether Devine was really joking.

Gore was so rhetorically emasculated he was unable to pin Bush on a number of issues where the Texas governor's charm glossed over his record.

When briefly mentioning all the felons able to get licenses to carry concealed weapons in Texas, Gore even felt the need to footnote his story. "The Los Angeles Times spent a lot of ink going into that," he said before changing the subject. Bush didn't address the issue, one of the big public policy disasters of his gubernatorial tenure.

Another time, suggesting Bush had let the James Byrd hate crimes bill fail in a legislative committee -- and after Bush essentially dodged the issue -- Gore said, "I may have been misled by all the news reports about this matter." He wasn't. Bush let the bill die in committee because he didn't want gays and lesbians included in the hate crimes bill. After Byrd's sister met with Bush to lobby him for passage of the bill, she reported that he was rude to her. Bush later said that he had spoken with members of the Byrd family to offer his condolences, but they disputed that.

Bush's dodges and hedges were not, at times, exactly slick. After Gore pointed out -- saying he was "sorry" to bring the news up -- that Texas "ranks 49th out of the 50 states in healthcare in children with healthcare, 49th for women with healthcare and 50th for families with healthcare" -- Bush seemed to punt.

"You can quote all the numbers you want but I'm telling you we care about our people in Texas," Bush said. "We spent a lot of money to make sure people get healthcare in the state of Texas."

Gore responded, "I'm no expert on the Texas procedures, but what my friends there tell me is that the governor opposed a measure put forward by Democrats in the Legislature to expand the number of children that would be covered," Gore said. "And instead [he] directed the money toward a tax cut, a significant part of which went to wealthy interests. He declared the need for a new tax cut for the oil companies in Texas, an emergency need, and so the money was taken away from the [Children's Health Insurance Program]."

All of which is true. But then Gore added, defensively, "You don't have to take my word for this. There is now a federal judge's opinion about the current management of this program, ordering the state of Texas to do -- you should read that judge's language about this. I believe there are 1.4 million children in Texas who do not have health insurance."

Gore was then put in the position of having to defend his feelings about Bush's heart. "It's not a statement about his heart," Gore said. "I don't claim to know his heart. I think he's a good person. I make no allegations about that. I believe him when he says that he has a good heart. I know enough about your story to admire a lot of the things that you have done as a person."

"But I think it's about his priorities," Gore added.

Bush pulled this all night. Here in Wait Chapel, home to a congregation that voted this year to allow gay and lesbian weddings, Bush was asked if would he support the Employment Non-Discrimination Act, which would protect gays and lesbians from being fired because of their sexual orientation.

"I have no idea," Bush said. "I don't know the particulars of this law. I'm the kind of person, I don't hire or fire somebody based upon their sexual orientation."

Bush kept glossing over his position against gay and lesbian rights. He said he favored "equal" rights for gays and lesbians, though not "special" rights. But Bush has supported a Texas law that allows the state to take adopted children from gay and lesbian couples to place the kids with straight couples.

Gore tried to point out Bush's extremism on the issue.

Not only do Gore and his running mate, Sen. Joe Lieberman, D-Conn., support some sort of civil recognition of gay and lesbian couples, but Bush's running mate, former Defense Secretary Dick Cheney, also seemed to be leaning that way during last week's vice-presidential debate.

"I basically agree with Dick Cheney and Joe Lieberman and I think the three of us have one view and the governor has another view," Gore said.

"I'm not kind of view he's describing to me," Bush said, according to the transcript. "I'm a person who respects other people. I respect -- one day he says he agrees with me and then he says he doesn't. I will be a tolerant person. I've been a tolerant person all my life. I happen to believe strongly that marriage is between a man and a woman."

Later, Bush said: "We ought to do everything we can to end racial profiling." But it was this year that the Texas Department of Public Safety began keeping detailed information about the race and sex of all people stopped by its troopers.

Then Bush said, "He is for registration of guns." Gore actually favors licensing for new handgun purchasers but nothing as vast as registering all guns.

Later still, Bush said he found Gore's propensity to exaggerate "an issue in trying to defend my tax relief package. There was some exaggeration about the numbers" in the first debate. No, there wasn't, and Bush himself acknowledged that the next day on ABC's "Good Morning America" when Charlie Gibson pinned him on it.

Gore was so afraid of being called a meanie he let Bush get away with nearly everything, relying pathetically at the end on a cheap shot against Bush's "having trouble explaining" his tax plan. He even offered a mea culpa that was delivered with more energy and thought than anything else Wednesday night.

"I got some of the details wrong last week in the examples I used last week and I'm sorry about that and I'm going to try to do better," Gore said. "One of the reasons I regret getting a detail wrong [is that it] interfered several times with the point that I was trying to make. However many days that young girl in Florida stood in her classroom, however long, even if it was only one day, doesn't change the fact that there are a lot of overcrowded classrooms in America and we need to do something about that.

"I can't promise that I will never get another detail wrong," Gore said. "But I will promise you this with all the confidence in my heart and in the world, that I will do my best if I'm elected president; I'll work my heart out to get the big things right for the American people."

There's no fault in trying to be polite. But if Gore can't offer a more spirited defense of why he is better on the issues -- or at least explain how he and Bush differ on gun control, the environment or any number of other issues -- then he ought to give up. That is what it looked like he was doing Wednesday night.