The presidential candidates have not widely touted their plans to deal with drug abuse. Is it because of their own suspect histories? 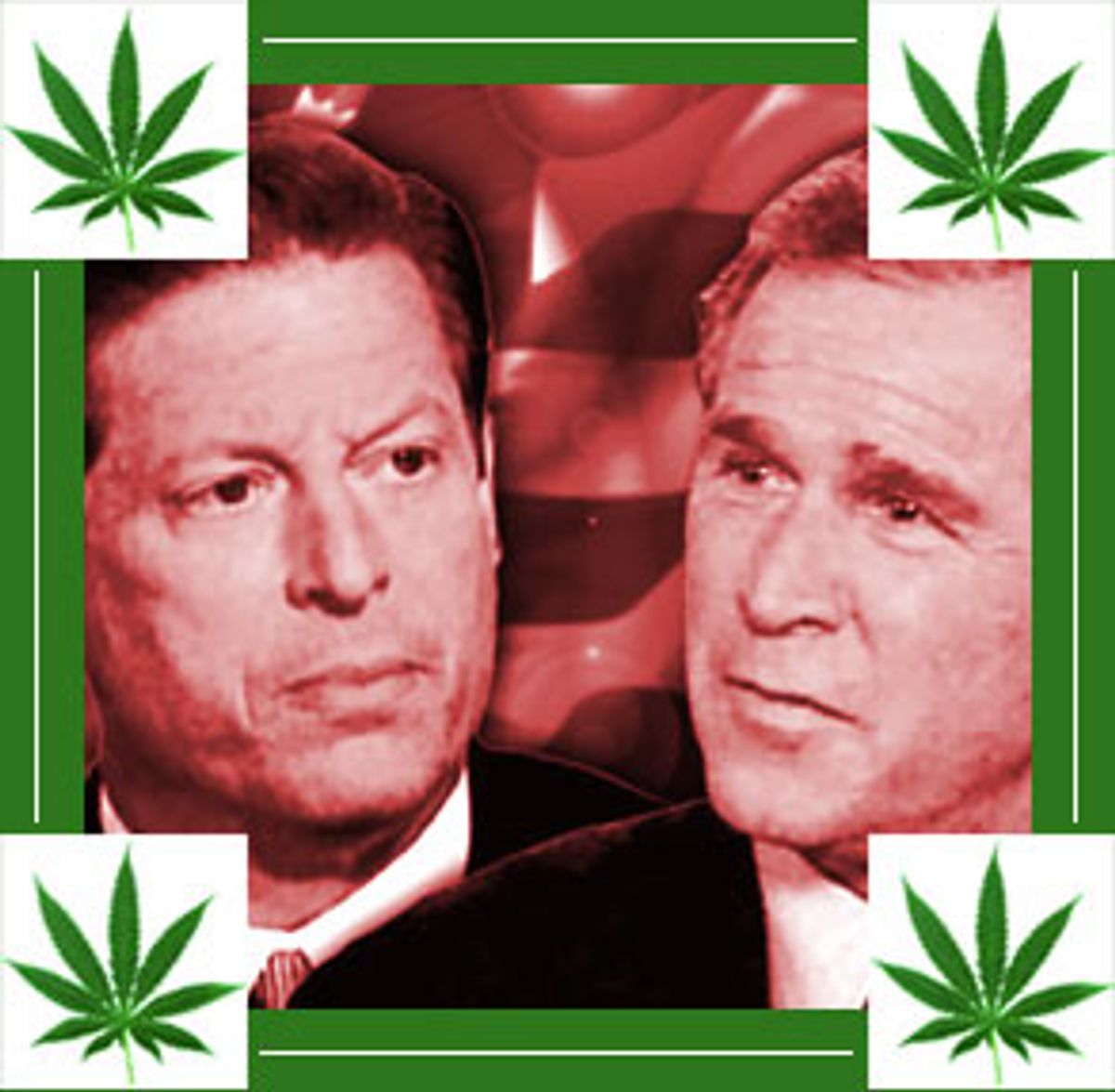 Al Gore and George W. Bush have strenuously avoided discussing the $19 billion drug war for most of the presidential campaign -- a deafening silence compounded by the national media's peculiar inclination not to press the candidates on drug-related issues beyond their own alleged (Bush) and acknowledged (Gore) use of illicit substances.

So it was something of a landmark moment in the campaign when Bush finally broke his silence on the issue last Friday by taking a swipe at the Clinton administration's drug war policies. In a speech in Cedar Rapids, Iowa, Bush deplored what he claimed was an increase in teenage drug use caused by Clinton and Gore "sending the wrong message" and "failing to show leadership."

Yet Bush's critique missed by a mile. It's true, as he stated, that teenage marijuana use climbed through most of the 1990s. But that trend occurred throughout the Western world, from lenient Switzerland to France, whose drug laws are nearly as tough as ours. Although Bush argued that the U.S. situation resulted from a "leadership gap," any half-serious examination of the topic makes W's claim appear dubious.

In 1996, President Clinton covered his "never-inhaled" flanks by appointing Gen. Barry McCaffrey as the nation's drug czar. The staffing of the White House drug office immediately shot up even higher than it was under Daddy Bush, when former Florida Gov. Bob Martinez filled his office with political hacks. The anti-drug budget has increased from $12 billion to $19 billion under McCaffrey's leadership, and around the country drug arrests are up 50 percent.

Clinton was the first presidential candidate of the generation that experimented widely with drugs; this year's election is the first in which both candidates have found themselves battered by questions about drug use, a situation that is likely to occur in every election from now on. The two candidates, naturally, have offered fuzzy answers to reporters' hard questions about their youthful indiscretions. They appear far more comfortable promising to get -- and stay -- tough on drugs.

Gore released a drug war plan quietly in May. Now that Bush has also weighed in on the issue, the dual plans reveal one area both men have in common: They think that drug use should be treated -- in prison.

"I think it's very unfortunate that they have these drug backgrounds because it means neither of them is willing--at least in a campaign--to make a move toward less harsh policies, because that would open them up to attacks they can do without," says Peter Reuter, a professor of criminology at the University of Maryland.

"Clinton's infamous line about never having inhaled was very expensive," Reuter says. "It really cut down his options a lot. Gore is conspicuously uninterested in this topic. And obviously for Bush, given how prominent the issue was early in his campaign, he has no room for maneuver, and probably no instinct for it either."

Bush, by his own admission, was a heavy drinker until 1988. In a classic Clintonian "nondenial" denial, he has claimed that any illegal drugs he did or didn't do he stopped doing if he was doing them 25 years ago, when he was 28 years old. "Young and irresponsible," maybe, as he has said, but certainly not a minor. People doing the same things that he was possibly doing back then can get thrown in prison today -- and particularly if they live in Bush's home state.

Gore claims to have smoked pot only occasionally while at Harvard, in Vietnam and during graduate school. But a few friends' recollections suggest his use may have exceeded the once-in-a-while toke. Jerry Roberts, managing editor of the San Francisco Chronicle and a dorm-mate of Al Gore and actor Tommy Lee Jones at Harvard in the late 1960s, jokingly told a group of journalists attending a conference last month that when Jones told the Democratic Convention about how he and Al would watch "Star Trek," it was a "euphemism" for smoking dope.

One former acquaintance, John Warnecke, claims that he and Gore smoked dope regularly through 1976, when they both worked at the Tennesseean, a Nashville newspaper. Gore even had his own roach clip, Warnecke says. (The Gore campaign claims Warnecke is wrong.)

Although Nixon started the drug war, it really came to occupy a central place in American politics some time after 1976, the year that Keith Schuchard and Sue Rusche, two suburban Atlanta moms, noticed that their seventh grade kids were getting stoned all the time. The women wrote letters to their congressman and the head of the National Institute on Drug Abuse; the nationwide parents' movement they launched gave the war on drugs permanent fuel because it proved that white suburban swing voters were eager consumers of a tough-on-drugs message.

Twenty-four years and millions of arrests later, the war on drugs seems as healthy as ever. However, politicians have apparently started to accept the fact that police alone -- whether in Baltimore or Cartagena, Colombia -- can't stop the drug problem. In addition to being tough on crime, politicians are increasingly paying lip service, at least, to prevention and treatment.

Last week, Bush promised to dump more money into training parents to talk to their kids about drugs, more money for community anti-drug policing, more money for coca bushwacking in the Andes and interdiction flights. But one of the keynotes of Bush's proposal was the call for more drug testing and treatment in prisons, along with more funding for drug courts that offer alternatives to incarceration. Gore's anti-drug plan -- called "Get clean to get out, stay clean to stay out" -- also calls for drug testing and treatment of inmates, and beefing up the drug courts. Bush's package calls for additional spending of $2.7 billion over five years, Gore's for an extra $5.3 billion over 10 years -- which amounts to pretty much the same thing.

The drug courts are a varied set of institutions around the country in which people arrested for drugs can avoid prison by spending up to 18 months in heavily supervised treatment. The first drug court was set up in Miami in 1989, when Janet Reno was district attorney there. The idea was to help deal with some of the thousands of crack addicts whose cases were swamping regular courts.

Several cities began copying Miami's drug court, and in 1994 Congress authorized federal funding to support the courts -- there are an estimated 580 around the country right now. Judges and drug counselors alike favor the courts, because they combine the carrot of a new start with the stick of threatened prison time for those who repeatedly fail urine tests during the process. California, with more than 120 of the courts, leads the field.

Texas, under Gov. Bush, lags far behind, as it does in drug treatment as a whole.

At the moment there are only six functioning drug courts in Texas, and many of them are underfunded. "We've had problems getting stable funding," says Judge Vi McGinnis, who has run a drug court in Beaumont for seven years. "Nobody at the state level has shown much interest."

There are more than 28,000 people in prison on drug charges in Texas, up from 17,000 when Bush became governor, and probably another 50,000 inmates with drug problems of some kind. But there are only 5,300 treatment spaces inside the prisons -- a third of the number that Bush's predecessor, Democrat Ann Richards, had promised to establish before she was unseated by Bush.

"We have one of the highest prison populations in the country," McGinnis says. "We built them like crazy and they're starting to fill up. They're going to have to make a decision at the state level about whether they want to just keep engorging the prisons or do something about the problem. Even little Louisiana has 32 of the courts and we've only got six."

Bush does seem to be taking notice -- perhaps because of the coming election.

Judge Larry Gist, who brought the drug court idea to Texas after observing it in Florida, says Bush's director of justice called him just within the past week to set up a meeting to talk about the courts.

Many treatment advocates are heartened to hear that Bush and Gore are at least discussing increasing treatment, even if it is treatment in prison. At the moment, only half of the 4 million estimated drug addicts in the country have access to treatment. In prison, only about 5 percent of the inmates with substance abuse problems get treatment, according to Stephen Belenko of Columbia University.

"Treatment is good wherever you provide it," says Dr. Robert Schwartz, a treatment specialist who works in Baltimore for billionaire George Soros' Open Society Institute. "But whether the addict is coerced into it by facing prison, or losing his job or his family, it only works in the long term if it's voluntary."

What that means is that addicts have to have some reason for stopping using drugs. To give them the reason, says Schwartz, you have to offer them comprehensive packages that include education or job training, psychiatric care and efforts to get them off dope. Soros' group is helping Baltimore provide treatment on demand to addicts, along with ancillary services.

In the opposite corner of the country, in the coyote-infested corner of Southern California where he works as a counselor to methamphetamine addicts, Jay McGuire sometimes wishes that tough-on-crime politicians could see what he sees.

"There are a lot of people who believe all these guys should just be put in jail but if they met some of them they'd see treatment does work. Not always, but often," he says. "A lot of these guys are 18, 19, 20 years old and they're going to prison for something they believed was the norm. They grow up seeing dad sitting in the front room shooting dope."

McGuire, 41, and a recovering addict himself, has been a counselor in Indio, Calif., for nine years, the last two in a program that treats addicts sent over by the Riverside County drug court. Seventy percent of the addicts graduate the one-year course without falling off the wagon -- a statistic that bears up around the country, although it's a little early to know how much of a dent in drug addiction, and crime, these special courts will make.

There's one 23-year-old kid in McGuire's current group who's getting the first treatment he's had since he became an addict seven years ago. "The other day I looked at him and said, 'How does it feel to wake up not feeling sick to your stomach with snot running down your face?"' said McGuire. "And he broke into this shit-eating grin and said, 'It feels good, Jay.' And I almost cried."