The recklessness of the nerds

A new book, "When Genius Failed," reveals how arrogant math geeks at Long-Term Capital gambled away billions and caused panic on the Street. 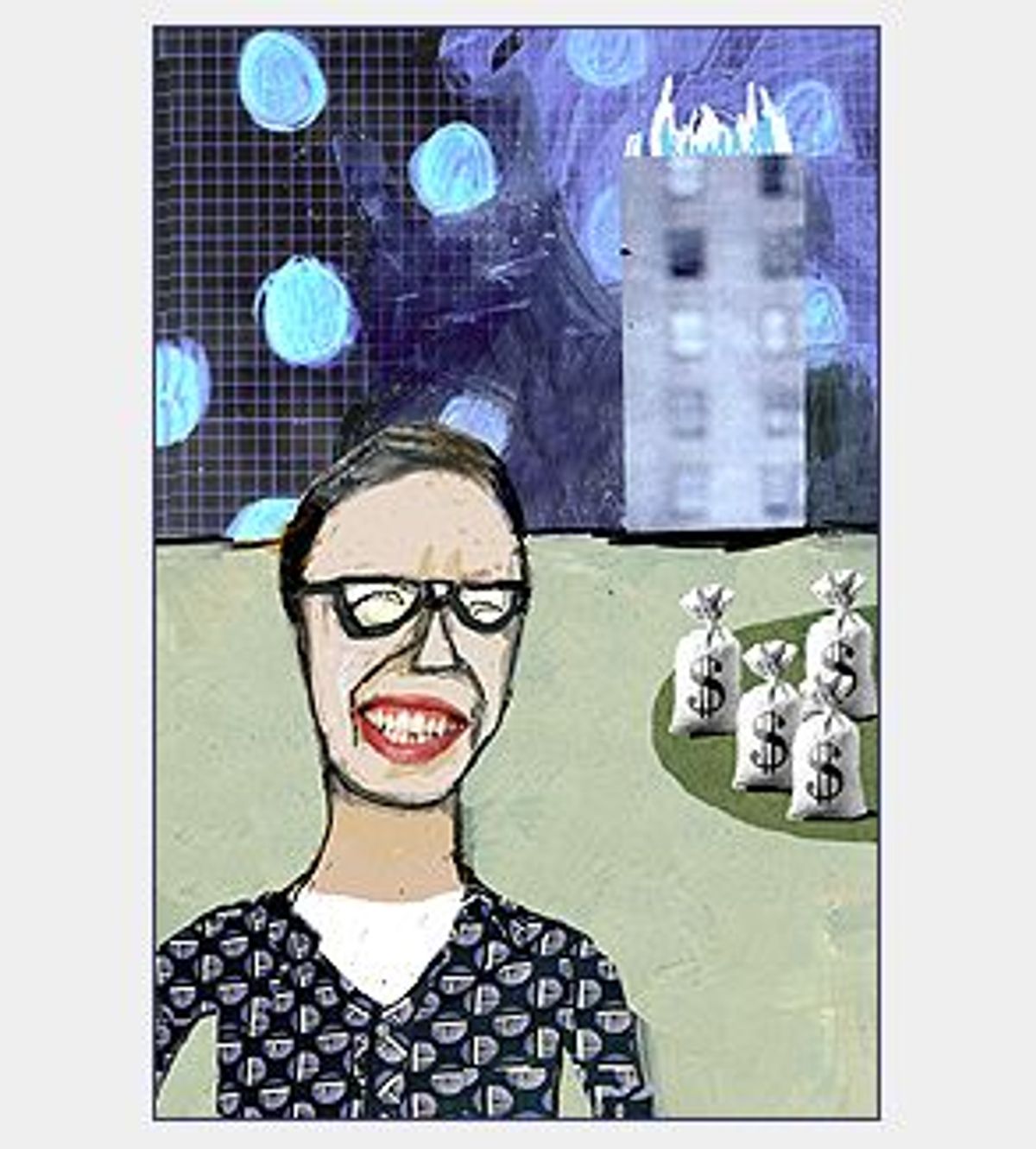 Roger Lowenstein's "When Genius Failed" is a kind of '90s sequel to "Liar's Poker," Michael Lewis' celebrated tell-all memoir of Wall Street in the '80s.

But aside from the uncommon lucidity they share, the two books couldn't be more different. "Liar's Poker" portrayed the trading floor of Salomon Bros., then the hottest firm on the Street, as a pinstriped version of "Animal House." Lewis' milieu was a raucous, macho fraternity where slobbering, swaggering dudes like "The Human Piranha" (who shouted the "F" word in every breath) prided themselves on cajoling and intimidating clients into buying "dog shit" bonds. It was a realm ruled by balls, not brains, and the story line was how Lewis -- an urbane art history major from Princeton -- learned to fit in with crude boys and establish himself as one of the "Big Swinging Dicks."

Lewis' narrative was wonderfully entertaining, but according to Lowenstein's first-rate book, it turns out that another contingent on the Salomon trading floor was making a helluva lot more money than Lewis' Neanderthals. Salomon recruited a bunch of quiet, aloof, socially awkward supernerds -- mostly economics professors from top universities -- to sit among the frat boys. While the others traded based on gut instincts, these geeky geniuses were the ultimate rationalists, relying on complex mathematical models and harnessing staggering amounts of computer power to discern extremely subtle trends in the markets.

Their leader, John Meriwether, the head of trading at Salomon, wasn't at all like Lewis' bad boys. He had a strict Roman Catholic upbringing and kept rosary beads and prayer cards in his briefcase. Even as a teenager he was so cautious and methodical that he wouldn't bet on his hometown team, the Chicago Cubs, until he got a weather report about the winds at Wrigley Field.

The nerds were Meriwether's real stars. Lewis thought he was a big shot when he got a $225,000 year-end bonus, but that was nothing compared with the $23 million that one of Salomon's professors pulled down in 1989.

In "When Genius Failed" (published by Random House, the same parent company that published my new book, "The Second Coming of Steve Jobs") Lowenstein picks up the story in the early '90s, as Meriwether takes the fall for an underling's lawbreaking and leaves the firm. He brings the professors with him to the preppy haven of Greenwich, Conn., where they create a new firm called Long-Term Capital Management, raising buckets of cash from famous rich guys like Hollywood agent Mike Ovitz and Nike CEO Phil Knight. Long-Term Capital was a hedge fund, meaning it was a private partnership open only to a small number of high-net-worth individuals who could afford to take big risks with their money.

Long-Term Capital was instantly and fabulously successful. In 1996, the firm made an astonishing $2.1 billion, eclipsing the profits of huge, established companies such as McDonald's, Disney or Xerox. The trick wasn't that its investments shot up in value. It was that it was playing with staggering amounts of other people's money that it had borrowed. The firm squeaked out only a measly 1 to 2 percent return on its bets, but because of its massive borrowing, the crumbs of profit were billion-dollar crumbs. It wound up controlling assets worth a shocking $140 billion. That made Long-Term Capital two and a half times the size of one of the largest mutual funds, Fidelity Magellan, and even bigger than investment banks like Morgan Stanley.

Meriwether was able to borrow great sums mainly because of the aura surrounding his team of academic geniuses, which included two Nobel Prize winners. Long-Term Capital was cast as the math whiz with the mental ability and emotional discipline to count cards at blackjack. It was as if everyone pooled their hard-earned savings and sent him to Las Vegas, where he would watch patiently for hours until he knew that the deck would be stacked in his favor.

It was a good system, but it was too good to last.

In 1998, the firm's portfolio crashed disastrously, after adverse world market movements triggered massive selling. Long-Term Capital's collapse threatened to create a panic on Wall Street, since many major banks had lent it such huge sums. Despite the public backlash that would result from rescuing a bunch of rich speculators, the Federal Reserve orchestrated a multibillion-dollar bailout.

What went so spectacularly wrong? Lowenstein explains that the professors' core belief was that financial markets behaved in a supremely rational and coolheaded manner, much like they did. That was the basis for their elaborate models and computer analyses. Indeed, it was a basic tenet of modern financial theory that went virtually unchallenged in academia. Unfortunately, that tenet is incorrect. Financial markets are no more rational than the humans who buy and sell securities, and humans are maddeningly unpredictable. They're often driven by wild emotion rather than cold reason, especially during periods of crisis. So when the Asian economic crisis exploded and Russia defaulted on its debt in the late '90s, the financial markets lost their mind and went totally berserk, and Long-Term Capital's computer models couldn't help.

The other problem was that when Long-Term was still flying high, the professors -- intoxicated by their success -- diverged from their smoothly scientific methods. They began making huge and surprisingly risky investments based more on faith than reason. It was as if the geeky card counter got caught up in the excitement and distractions of Las Vegas -- the emotional thrills and the chips piling up in front of him -- and started betting on sheer impulse, rather than waiting countless hours for the perfect hand.

"When Genius Failed" isn't as flashy as "Liar's Poker," but it is a commendable book -- well reasoned and revealing. Lowenstein, a financial journalist and the author of an earlier study of investing legend Warren Buffett, excels at explaining financial matters in a concise way that illuminates without oversimplifying. It's rare enough for someone to be able to explain business so smoothly and cogently, but Lowenstein also has a deftness with descriptions. (He says that Meriwether was so unpretentious that "he could have been the State Farm agent down the street.") He also has a reporter's eye for telling detail, showing how one Long-Term Capital partner, once worth zillions on paper, ultimately was forced to use his wife's checkbook.

Could a Wall Street debacle such as Long-Term happen again? For the moment, it looks like we're safe. The prestige and mystique that hedge funds enjoyed in the '90s have been diminished by the failure of Long-Term Capital and several other high-profile players. The next big blowout was Julian Robertson's famous Tiger Management, which for years had enriched investors, including writer Tom Wolfe. (That's why he could afford to spend 11 years writing a novel.) Then Tiger lost billions in assets and ultimately closed down. And the loudest-mouthed hedge fund honcho, James Cramer, now of TheStreet.com, capped a decade-long winning streak with an embarrassingly lousy year when many of his backers rushed to pull their money out of his partnership. Suddenly it seemed as if even the biggest geniuses were as prone to screwing up as the day trader next door, and Wall Street wasn't nearly as eager to entrust the gurus with huge bankrolls.

But memories are fleeting in the financial markets, and when the next wave of speculative fervor arrives, it's likely that a fresh bunch of hotshots will emerge, with a new buzzword or twist on the same old game. Lowenstein shows that Washington hasn't done anything to preempt another Long-Term-like crisis. He faults Federal Reserve Chairman Alan Greenspan, who, in the name of free-market ideology, has stubbornly resisted calls for more regulation of derivatives, the financial instruments that helped Long-Term Capital control such vast assets.

While there are margin requirements that limit the amount of stocks investors can buy with borrowed funds, those rules don't apply to the newer, fancier derivatives, which are like side bets on securities prices without governmental oversight. There's nothing to stop the big investment banks from lending billions to another firm playing dangerous games. And if it can count on the feds to arrange a bailout, then why not roll the dice again?

Astonishingly, Meriwether and his crew are already back in action. Last November, they launched a new hedge fund, JWM Partners, which raised $250 million from many of the same investors who backed Long-Term Capital. As for me, I'd feel a lot safer entrusting my savings to the day trader next door.

Alan Deutschman is the author of "The Second Coming of Steve Jobs."