A conversation with Witold Rybczynski

The author of "A Clearing in the Distance" talks about Central Park, mechanical genius and the beauty of the screw. 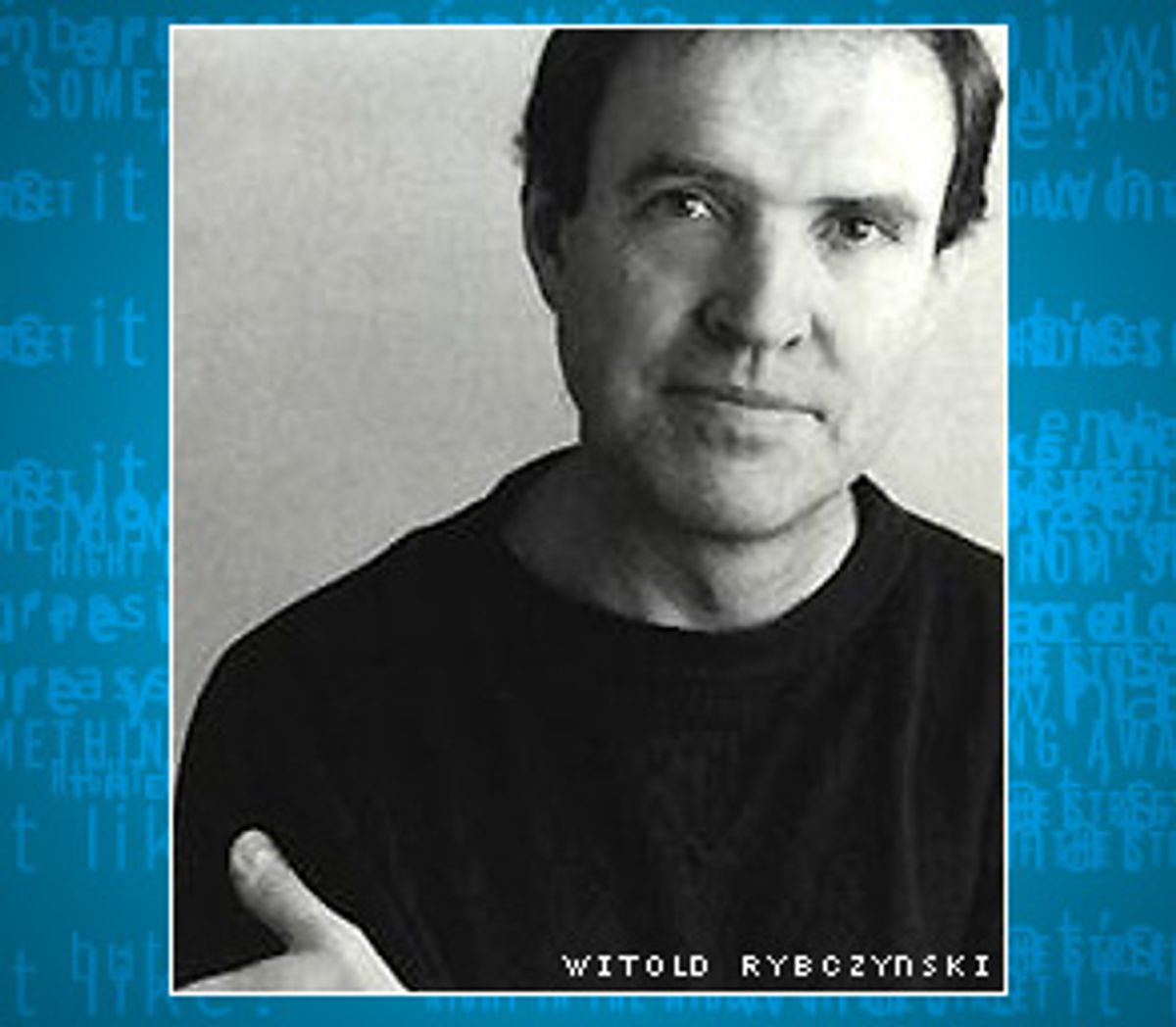 Working with your hands is fast becoming a lost art, unless you count the clickety-clack choreography of mouse and keyboard. Among those who understand this is Witold Rybczynski, the author, essayist and expert in architecture, design and urbanism. As recently as the 18th century, he's observed, aristocrats with time on their hands relaxed by working with lathes -- cutting and shaping machines that rotated the piece to be shaped. Nowadays, of course, we have hot tubs and video games.

Rybczynski, a professor at the University of Pennsylvania, has varied yet inherently related interests that have encompassed books on building a house by hand, the design of cities, the urge to control new technology and "Home," his exposition on the notion of home. His best-known book is 1999's "A Clearing in the Distance," an acclaimed biography of Frederick Law Olmsted, the pioneering landscape architect who created Central Park. Running through all of Rybczynski's books is the nearly alchemical meeting of idea and tangible form.

Which brings us to his new book, "One Good Turn: A Natural History of the Screwdriver and the Screw," a slim volume that grew out of an assignment to write an essay about the best tool of the millennium for the New York Times Magazine. As the book recounts, Rybczynski tackles the project only to discover that the handsaw, the brace and most other tools were developed long before the year 1000. Finally, on a suggestion from his wife ("I've always had a screwdriver in the kitchen drawer"), he settles on the screwdriver; he traces its origins to the 1400s, when "high tech" meant a new kind of armor. The narrative gathers momentum when he focuses on the screw, which he hails as a true marvel of invention, dating from classical Greece. As the book makes clear, Rybczynski is no nostalgia nut or Luddite, just someone who lives in the present but appreciates the past.

It seems you were more intrigued by the screw than the screwdriver.

The first screws most likely had square heads and were just tightened with wrenches. Once you want to countersink a screw, a notch is the simplest way: Just file a notch into the top of the screw. Then the screwdriver is obvious.

Why turn this into a book?

Most people think of "Home" as my first book, whereas I had written two books before that, both of which deal with the subject of technology. So in a way I was returning to something that started me writing, which was technology.

What's the larger theme of this book, beyond screws?

I prefer to discover a theme while writing, rather than to write a book to make a point. In this book, I think there are several themes, because I knew that it had to go somewhere else than simply be about screws and everything you ever wanted to know about screws. It turned partly into a book about writing. It isn't so much the writing that I like, but I really enjoy going to libraries and looking for things. That's just fun. Rooting around stacks of a library and searching for things -- even finding the right book for me is a pleasure. But it's not something I've ever written about. So in this book, I made that whole phase of research part of the story. As I was writing, I realized that there were two types of discovery: There was the discovery I was writing about, which was people improving various devices and solving problems; but there was also the process of discovery of my own.

The process and the type of people who make these kinds of discoveries seem to me interesting, and that became a part of the book. That is as close as it comes to a message, because I think the process of mechanical discovery isn't appreciated. We think of artistic genius and we have no trouble imagining an artistic genius. But we don't really think of mechanical genius, and I think, particularly today, mechanical genius in a way has almost disappeared.

Your book dwells on this idea of "mechanical genius," especially in the development of the regulating screw, the refined screw used in sextants, microscopes and other precision instruments. Of Henry Maudslay, who revolutionized regulating screws and lathes in the early 1800s, you write: "Just as some people have a natural aptitude for chess or playing violin, Maudslay could shape metal with a dexterity and precision that amazed his contemporaries."

Today, we sort of assume that if you have an idea, making it is almost automatic. We're very cerebral, and I think a lot of that has to do with designing software, which at one level is kind of dumb -- it's all digital, it's zeroes and ones. So it's a highly cerebral process in that you don't actually make anything. As I understand it you basically solder things together. I think somebody, somewhere, must make something, but since everything is made by machine, this idea that you need skill to make it or that making it is actually a huge achievement is probably less important today than it was. In the past, to actually make the screw was a huge achievement, because you had to make it by hand. That sort of mechanical genius, which arguably is less important today, became part of the book because it's an aspect of genius that isn't appreciated or understood.

How has the idea of "tool" changed?

Literally, mechanical things aren't that important anymore. Most of them are made by other machines, which achieve enormous levels of accuracy and precision. And so the idea that you need this skill to make something doesn't really apply much anymore in most devices. It's the idea that's important rather than the mechanical aptitude needed to realize the idea -- that's almost taken for granted.

When did machines start to make machines?

It's very particular, this moment in the Industrial Revolution when people start making machines, particularly lathes with regulating screws. Because once you've got these lathes, then they can make other lathes, and you're off and running. But it's a chicken-and-egg thing at first: How do you make a machine that's as good as a lathe when you don't have a lathe to begin with? That's the great achievement of people like Maudslay. And once you've gotten over that hurdle, you can make machines that can then make better machines. It really is a biological process. And from then on, anybody can make accurate machines. Where the screw really plays a central role is probably a unique moment -- by definition it doesn't reoccur.

You started "One Good Turn" while taking a break from writing your biography of Frederick Law Olmsted. What was the most compelling aspect of Olmsted's life?

Perhaps his fearlessness, the way in which he would undertake things without enormous training. And this is not unique to Olmsted. I think it was a common characteristic of the 19th century, which wasn't an age of specialists. You can see this at a number of points in his life, even when he's offered a job as a reporter and he's never really done any journalism at all. But he accepts it and immediately goes south and spends months traveling around and writing. He could plunge into things, and he generally succeeded.

It did when I was writing the book. I think any biographer identifies with the subject because there has to be some reason you chose this person to write about. In this case, Olmsted did come to his calling late. And I certainly identify with that because I didn't start writing seriously until I was about the same age -- early 40s.

And I think his curiosity is something I identify with. Let me put it this way: People often write about Olmsted and look at his early life and see that as somehow being odd or unconnected from his great achievements. Whereas I think I could sympathize with his curiosity and the various things he was trying. It didn't seem to me so odd that he had all these interests. Also, it seemed to me that they were a part of his later success.

Well, anyone would consider Central Park a success, even though it was the first park he designed.

The other thing that's impressive about Olmsted, specifically in things like Central Park, is his foresight and the accuracy of his predictions. He's building these very large parks, which are out of scale with the needs of the time, but he's looking ahead and seeing that the city's going to grow around them and they're really going to be necessary. When we enjoy and use these places that he designed a hundred years before, we don't think of them as antiques. We think of them as quite contemporary. And more or less, they affect us in the ways they were designed to.

Olmsted already belongs to an age where the ideas are more important than their execution. Is it possible to say whether this primacy of ideas is good or bad?

I don't think so. The only extent to which it's a bad thing is when we've come to take for granted all these things, and then we're shocked if something mechanically doesn't work, because most of the time it does work. So it removes us a little bit from the reality of things. It's probably why people take up things like woodworking and gardening -- it gives you an opportunity to work with your hands and use skills you probably don't need in everyday life. So you can make up for it artificially.

But it's maybe slightly a bad thing in that it distances us from our environment. Although that's been going on so long, since the Industrial Revolution. The average worker had no idea how those lathes worked. So it was pretty early that machines became so complex that the craftsman didn't exercise personal control anymore.

Is this exacerbated in what has come to be called the "Information Age"?

Well, sometimes I think the media overemphasizes the importance of information. I suspect it's not quite as important as we think. The people who make the tires, for example, turn out to be very important, and they're still actually a much bigger part of the economy than the information economy. And, for that matter, so are people who build the computers. The nuts-and-bolts aspect of things gets pushed too much into the background.

Loren Fox is a freelance writer based in New York.