It looks lurid and profane, but this gutless thriller accepts the prevailing wisdom that a politician's "character" matters. 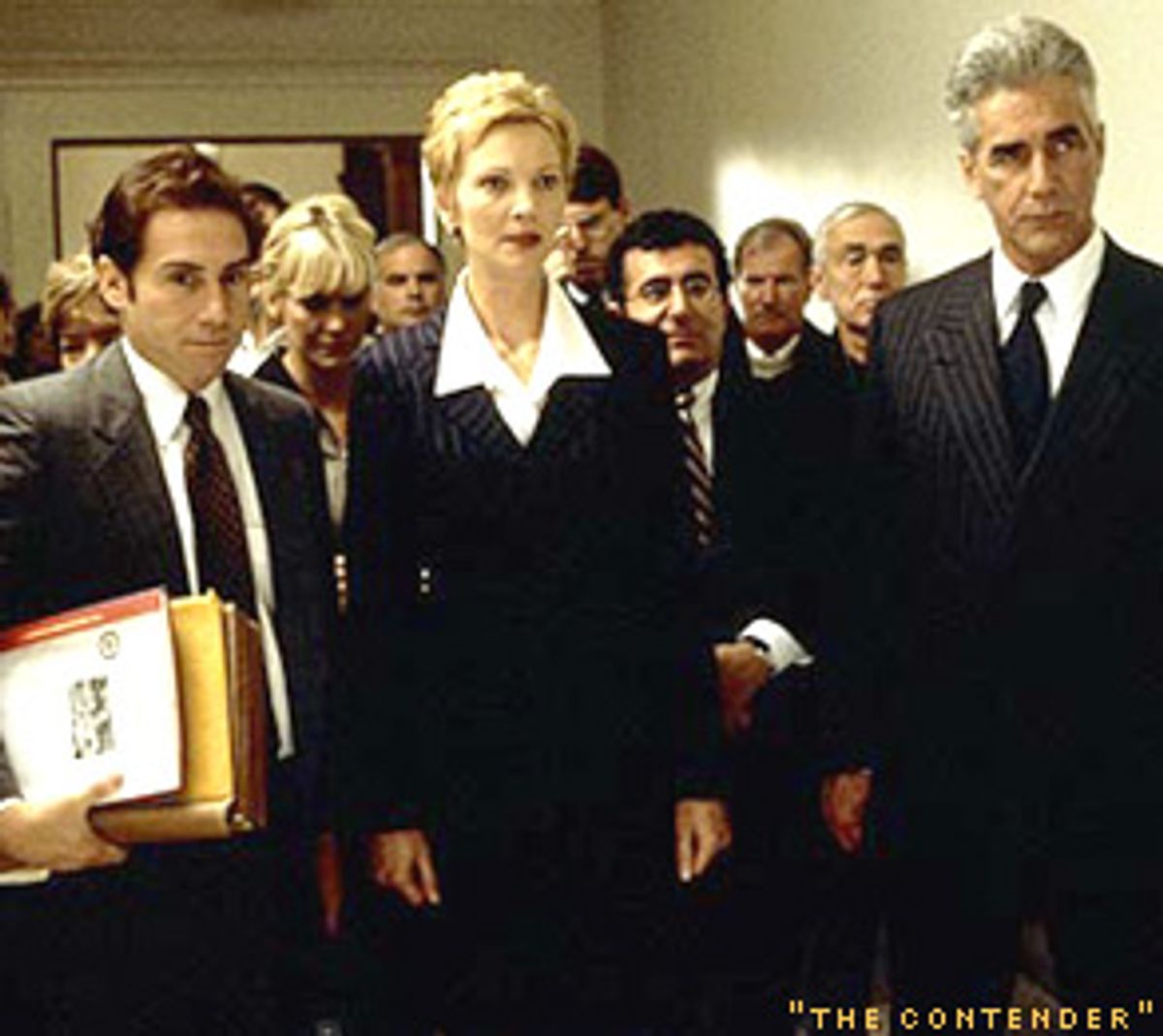 If there's one filmmaker whose influence deserves to be banished from American movies, it's Frank Capra. Not the early Capra who made sharp melodramas like "The Miracle Woman" and "The Bitter Tea of General Yen" (his best film) or the proto-screwball comedy "It Happened One Night." I'm talking about the later practiced manipulator of "Mr. Smith Goes to Washington" and "It's a Wonderful Life" who hit upon the formula for reducing even people who ought to have known better to puddles by mixing tears and laughter with populist uplift.

Capra's We-the-People gush is the last thing you might reasonably expect to find in a political drama inspired by the inquisition exacted by our present-day Torquemada, Ken Starr. But by the end of "The Contender," the scoundrels have been unmasked and patriotic righteousness carries the day. Amid swelling music and cheering throngs, America has been made safe for democracy.

"The Contender," which was written and directed by the former Los Angeles film critic Rod Lurie, is the most gutless and naive political drama of recent memory. The movie comes on profane and juicy, promising the behind-the-scenes dirt on the process of choosing and confirming a presidential appointee, only to bury itself under a steaming heap of plot contrivance, equivocation and preachiness.

Laine Hanson (Joan Allen) is a democratic senator chosen by President Jackson Evans (Jeff Bridges) to fill the vacancy left by his vice president's unexpected death. Evans believes that bringing the first woman into the executive branch of the government will assure his niche in history. But the conservative congressman Shelly Runyon (! -- Gary Oldman), who will preside over Hanson's confirmation hearings, isn't ready to jump on the bandwagon. Among other considerations, he's miffed that a good friend of his has been passed over for the nomination.

After Runyon receives a videotape of Hanson involved in some wild and drunken frat-house group sex during her college years, he turns the hearings into an assault on her character, mixing insinuation and public posturing while pretending to play fair and square. As the questions of her qualifications and positions on crucial issues are ignored, Hanson makes things even tougher on herself by maintaining that questions about her sexual past are a private matter and refusing to address them.

There's a promising, dicey subject in all this: The childish preoccupation in some quarters of this country with the "character" of our politicians. In politics as in almost everything else, character has next to nothing to do with ability. If elected officials set a moral tone, they do so by the priorities they reveal in the legislation they sponsor and the positions they take. Lurie would seem to be endorsing that view when he has Hanson end her confirmation hearings by stating her positions on all the issues that her inquisitors have ignored.

And Hanson's insistence that her private life is separate from what qualifies her to be vice president seems to be a recognition of our moralistic preoccupations. It may be meant to recall President Clinton throwing down the gauntlet to Ken Starr by saying, "Even presidents have private lives." But "The Contender" ends up supporting the ridiculous notion that what matters in politics is the moral character of our leaders' behavior. The movie applauds Hanson because she refuses to dirty her hands with politics. Lurie wants us to believe that she's right for the job because of the purity she shows in refusing to fight back. For a feminist path-paver Hanson is startlingly retrograde, a fair maid who leaves the dirty jobs to the men around her. She's so spotless that the movie winds up saying exactly what her detractors claim (and what Clinton's enemies claimed): that any errors of personal judgment would make her unsuitable for the job.

Hanson winds up having a lot in common with her detractors: Like them, she's willing to sacrifice people to principles. The movie tells us that she had supported Clinton's impeachment. Senior military officials had been put on trial for adultery, she reasoned; though she opposed those rules she thought the commander in chief should be held to the same standard. This is her idea of how to deal with an unjust law? To make sure everyone is punished for it?

And when Hanson comes into possession of a political bombshell that could ensure the conservative committee will not attack her for being pro-choice, she chooses not to use it, not even to pass it along to the White House so the administration could apply pressure through back channels. She doesn't stop to consider how something she presumably believes deeply in -- a woman's right to choose -- might be strengthened by the information. All she considers is how using the information might sully her own reputation. Is that Lurie's idea of what makes an effective politician?

In politics, purity is a negative virtue. The most progressive social changes of the last half-century, like Lyndon Johnson securing the passage of Medicare and the civil rights and voting rights acts, and Clinton's pushing the '94 Republican Congress to show its true face by allowing it to shut down the federal government, came about through wheeling and dealing, from knowing where and how to apply pressure, from appealing to people's vanity and their fears for their own political careers. If we want politicians not just to take the positions we favor, but to make those positions law, then we have to be honest that we want savvy operators who know how to stare down the opponents who set out to derail them.

There is no such thing as political effectiveness at nobody's expense. Lurie wants us to believe that the impeachability of Hanson's character carries the day, but it's the backroom wheelings and dealings of President Evans that saves her skin. And there's not a whiff of irony in that contradiction, not even a recognition that it exists.

If "The Contender" were really gutsy, it could have shown Americans flocking to Hanson and then being saddled with an ineffectual leader. Bridges' President Jackson Evans is the unacknowledged hero of "The Contender." It's one of Bridges' slyest performances, a combination of LBJ's wiles and Clinton's appetites. Evans is a politician who delights in the game of politics, as well as the perks. His favorite trick for impressing visitors is to call the poor beleaguered cook in the White House kitchen to satisfy his spur of the moment whim for hazelnut pudding or kung pao chicken. Bridges, employing a gruff, blustering voice, portrays Evans as a supreme games player who reveals himself only in his pleasure at gaining the upper hand. He's the politician as put-on artist, the sort of scoundrel you hope is in your corner.

Would that Bridges' relish were enough to subvert the movie's virtuousness. But Lurie is much too infatuated with his Joan of Arc, Hanson. Allen's specialty has been pinched, frightened women hiding behind a respectable fagade, and at times, as Pat Nixon or as the '50s mother in "Pleasantville," she's been terrific. But that kind of passivity can be a drag, and "The Contender" shows how she might easily become the Olivia De Havilland of the Zips. It's a role meant to cancel out sharpness, fire and cunning, and the most depressing thing about watching is seeing Allen such a willing accomplice in washing herself out.

Being washed out is never something Oldman will have to worry about. By the time he's through with a role, there's hardly a piece of scenery that doesn't bear his teeth marks. As Runyon, chain-smoking while outfitted in a curly fright wig and horn-rimmed glasses, he looks like the Three Stooges' Larry Fine reincarnated as an evil bookkeeper. Oldman gives a performance of such total phoniness that it will be a miracle if he doesn't win an Academy Award for it. Some actors bury themselves in a character. It may be the silliest piece of showboat acting since somebody had the batty idea of casting John Malkovich as a master of disguise in "In the Line of Fire." Like the disguises Malkovich donned in that picture, Oldman's makeup is designed to make us never forget the actor behind it. You don't say, "Who is that?" you say, "Wow! Look at that get-up Gary Oldman has on."

Lurie has said "Gary ... never believed his character was the villain of the movie." But the way Oldman acts and the way Runyon is presented there's never a moment when it's in doubt. If the elements of Runyon's character that Lurie has claimed for ambiguities were presented that way -- like his stated refusal to confirm Hanson simply because she's a woman -- he might have had some depth. But this isn't handled competently enough; Runyon's motivations seem to change from scene to scene with no coherent thread.

At first he seems to be taking revenge for his passed-over political ally; then, before beginning the hearings, he shifts into Starr mode and becomes the outraged warrior for decency. Oldman's performance isn't a jot on what George Hearn accomplished as a Starr figure in a "Law and Order"/"Homicide" two-parter, bringing the man's moral rot and absolute disregard for who he harmed to the surface.

If "The Contender" were just an ordinary bad movie, you could overlook the way that Lurie never seems to find a visual style (the movie is predominantly close-ups) or a rhythm for the scenes, and the ludicrously overheated dialogue meant to shock us with how politicians "really" talk. "The Contender" sells itself as a brief on the political nightmare of Clinton's impeachment and then makes itself willfully ignorant of the situation's political realities.

After what Clinton went through, how can we listen to Hanson and her supporters claim that the questioning about her sexual history would never be applied to men? And how can we swallow the movie's tub-thumping ending, where righteousness and decency save democracy, when the reality of Clinton's impeachment was how easily democracy could be used to subvert its very ideals and the worst offenders paid no political price? And how can we accept the dedication that ends the movie? "For Our Daughters," it reads. That would be a hoot if it weren't so hideous. Is this really what we want to teach young women, that if they're going to enter political life (or any other sort of public life) they should stand by in rectitude and propriety while people smear them? If only in terms of public perception, silence in politics means the same thing as acquiescence. Should young women be told that they'll be less honorable if they fight back? That's a hell of a role model to suggest for them. A doormat is a doormat, no matter how high its principles.