Going all the way

Ever wonder why skinny folks die faster in freezing water? Why divers get the bends but sperm whales don't? An Oxford professor explains life at the extremes. 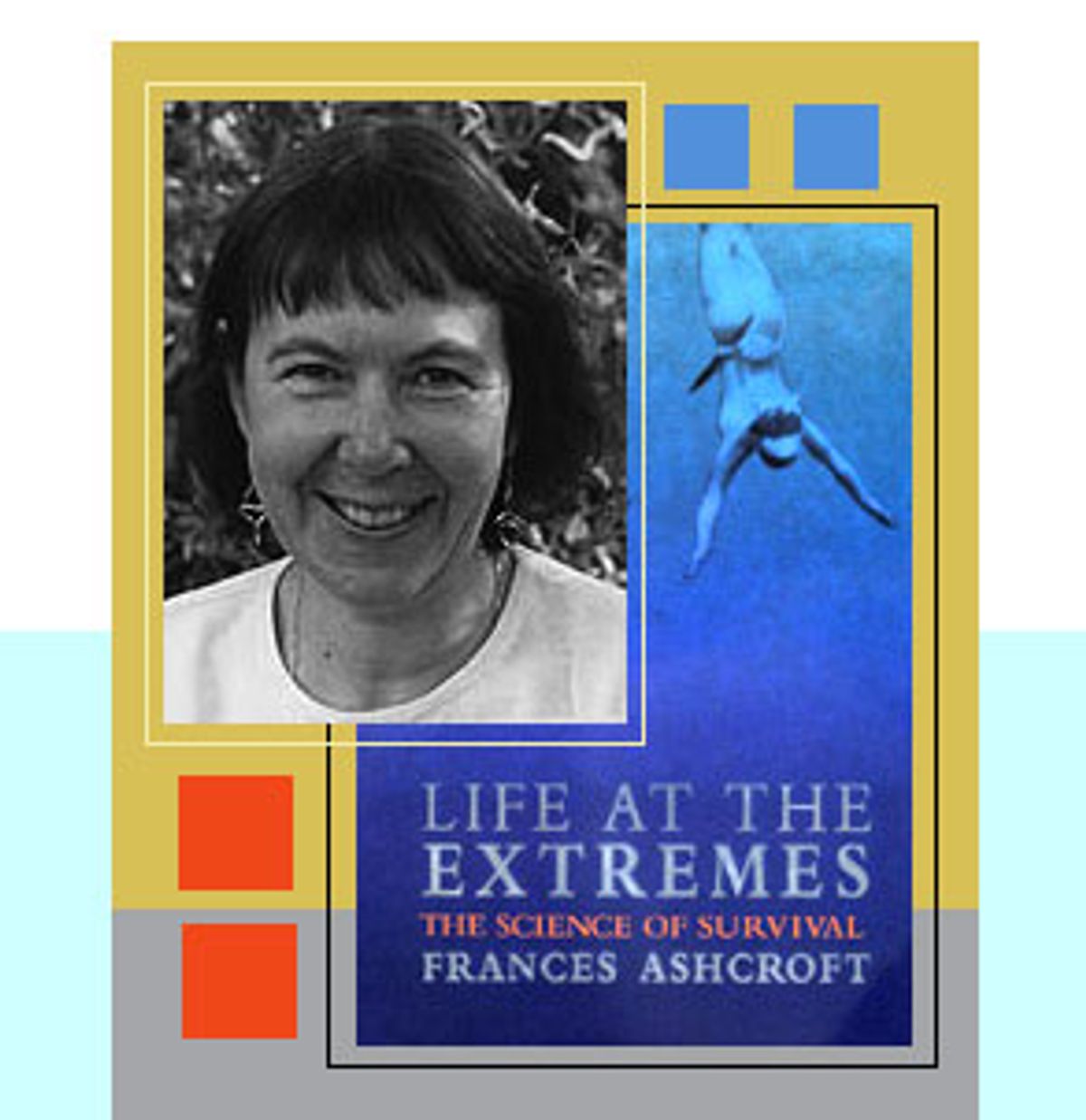 My definition of life at the extremes is that unbearable feeling on winter days when I ignore the forecast because it looks so sunny outside, leave the extra sweater in the drawer and shiver all the way to work; or, in the realm of the extremely extreme, when I'm crammed into the middle seat of a jampacked bargain flight to Europe, No. 26 in line for takeoff, with a screaming baby next to me, and there's no damned peanuts.

But either of those scenarios -- in fact, just about anything that would seem extreme to me -- would probably sound like a luxury vacation to most of the envelope-pushing adventurers Frances Ashcroft writes about in her new book, "Life at the Extremes: The Science of Survival."

Ashcroft, a professor of physiology at Oxford University in England, combines personal narrative, tales of derring-do and, most of all, accessible scientific explanations to describe what happens when human beings push themselves to their limits -- when they succumb to the overpowering urge to climb high, dive deep, run fast, immerse themselves in unbearable heat or cold and venture into the mysterious and dangerous realm of space.

She writes of men and women who have succeeded, and of those who have failed. She answers the questions that have plagued you for years, like: Why don't sperm whales get the bends when human divers do? Why can some human beings climb Mount Everest without extra oxygen while passengers in a plane that depressurizes at the same altitude stand no chance of survival? And what is the Vomit Comet?

And she writes of scientists and researchers who sometimes put their lives on the line (usually because they couldn't convince anybody else to do so) to solve some of the riddles of human survival. There was, for example, Sir Charles Bladgeon, who, in the 18th century, walked into a room heated to 105 degrees C (221 F) with some eggs, raw steak and a dog. Within 15 minutes, the steak and eggs were cooked to perfection; Bladgeon and the dog, fortunately, were not.

Ashcroft herself is no stick-in-the-mud. She has experienced some of the extremes she documents, including immersion in superhot Japanese baths, altitude sickness climbing Mount Kilimanjaro and the terror of her first deep-sea dive. Talking with Salon by telephone from London must have seemed like child's play by comparison.

The book's cover has a sort of eerie photo of diving women. What's that about?

Ah, yes, the Ama women of Japan. They've been around for 2,000 years. It's such an onerous profession. They're diving for abalone and shellfish and for the mother-of-pearl shells. The highly trained ones, the funado, dive to about 20 meters [66 feet] deep. They have a large weight attached that enables them to go down to the bottom. They dive down with a rope tied around their waist, and they have a small basket that they fill with the prime delicacies of Japan. And then a male assistant hauls up the basket, and the woman may fill more baskets, depending how long she can hold her breath. Then she's pulled up to the top by the assistant. At that depth, you do need someone to help you up, because as you dive, the air in your lungs compresses and you tend to sink.

One lady-in-waiting at the court of the Japanese empress a thousand years ago described the fact that the women are the ones doing all the work. They are diving down into the cold, having to hold their breath, and then come up sputtering and choking. Meanwhile, the men who are their partners sit in their little boats on the surface of the water, drinking and telling jokes and laughing and talking to all the other men, and generally having a good time.

Why do some of us prefer the comfortable middle, and others seem to have a real thirst for life at the extremes?

I think that there are two different sorts of people -- those who do it for the kicks, the adrenaline thrill, and those who do it because they find it interesting and fascinating. I'm one of the latter. The challenge of going up a mountain or looking at landscapes you've never seen before, is just exhilarating. I'd love to go into space and look down on Earth and space, wouldn't you?

No, I think it would be quite frightening! Talk about some of the extremes that you have gone to.

Personally speaking, I'm a wimp. I do things I think are interesting and exciting, but I have never really put myself in any danger. I have climbed to the top of Kilimanjaro. I have done a little scuba diving. I have been in very cold and very hot environments. But we all put ourselves in conditions where there are physical challenges to us; it's just that we don't necessarily notice them. All of us fly in airplanes, and if the plane depressurized, we would have a big problem. There are many things that we need to do, and we have engineered our environment so that we can survive without difficulty.

Without meaning any disrespect, what's exhilarating about feeling, on the top of Kilimanjaro, like your head's going to blow off from altitude sickness, as you describe in the book? To be honest, when you are in an extreme situation, you're not really thinking of the scientific explanations, are you? Aren't you just thinking, Get me out of here?

If you're a scientist, you see things on many different levels. I do think, I don't want to be here; let's get out of here. But at the same time, my brain is saying, What's going on, what's working, what can I do to make this better, how can I behave? And at the top of Kilimanjaro, the view is wonderful! There you are, and you have ice fields on the equator!

Is there an extreme you wouldn't go to?

The people I admire most of all are firefighters. I'm afraid of fire. The whole idea of walking into a firestorm -- that to me is so scary I just couldn't bear to do it. My recurrent nightmare is running down a road engulfed in flames.

Back to airplanes for a minute. I'm a fearful flier, and your explanation of sudden depressurization made me wonder whether those oxygen masks would really do the trick.

These things are very dramatic, but they happen very rarely. There's a reason you're told to put on your oxygen mask before you put it on your child -- if the cabin really depressurizes, you'll be rather woozy before you're even able to put it on your child. Once there was a blowout on a British Airways plane, where the window actually blew straight out, and the captain was actually sucked out. The reason he got sucked out, of course, is because he wasn't wearing his safety harness.

So it all comes down to wearing your seat belt?

You're saying, if you were in a passenger plane at 35,000 feet, and the window blew out right next to you, and you had your seat belt on, you wouldn't be sucked out of the plane?

You probably wouldn't be. But all the things sitting on your lap would be.

The other thing, of course, is that the windows on an aircraft are deliberately small. There is a trade-off between passengers who want to see what's outside and stopping things and people from being sucked out if there is a blowout.

I don't think I can talk about this anymore. Let's switch gears. Life at the extremes seems to run in your family. In your chapter about life in the extreme cold, you tell the story of how your own grandfather, who was sick and wounded, survived quite an ordeal during World War I. After his ship was torpedoed, he somehow survived many hours, semiconscious, in freezing cold water. How do you explain his not succumbing to hypothermia?

First of all, he was quite a fat man. The fatter you are, the more insulated you are and the better you do. Second of all, the thing you shouldn't do when you are in cold water is splash around and make a lot of movements. All those movements dissipate the water that is next to your body, which is warmed up by your body, so you do best if you just try to float. My grandfather was strapped to a stretcher, so he couldn't move at all. And the third thing was, he was running a severe fever, so he was generating a lot of heat, which kept him warm, I think.

I think we're developing a theme here. If you are fat and strapped in, you have a better chance of surviving air and sea emergencies.

It's fascinating that so many scientists and researchers have gone to real extremes themselves to answer questions about just how much human beings can endure. My personal favorite in the book is the British scientist who purposely put himself into convulsions to test the effects of gases on the human body at pressure. His work transformed modern underwater-diving practices.

Oh, yes, J.B.S. Haldane. One of the things that happened to him in his pressure chamber is that he got nosebleeds, and he wasn't very tidy, so he sort of dripped along the corridor. Yes, he was quite extraordinary. You have to remember that some of these experiments were carried out during the Second World War, and during war, people are much less concerned about taking risks because other people are dying all around them. So, for example, there were scientists who actually went down underwater, having calculated the safe distance from an underwater explosion, and had somebody detonate the explosion and then check that they were safe. That's what you have to do. You can't expect volunteers to do things you haven't done yourself.

Do you know what you're going to put your own body through next?

What I'd really love to do -- the one real extreme I'd like to try -- is fly in the Vomit Comet.

The Vomit Comet. It's used for training astronauts. It flies a parabola. It alternately dives and climbs in the sky. When it dives, you become weightless. And when it climbs, you get two times the force of gravity on you. A lot of people say it makes them sick.

OK, you've explained what happens when man goes into space, when man dives under the sea; you've explained how people can withstand incredible heat and cold. So now tell me this: How come nobody can make a decent cup of decaf coffee?

[Laughs] Scientifically, if you think about it, the question is how to get out the caffeine without ruining the flavor. I think it's actually not a trivial question. It's tricky. Some problems are just really difficult.

Barbara Raab is a writer and producer in New York City who contributes regularly to NBC News and PlanetOut.com.