War in the Middle East

The Israeli army responds after two soldiers are lynched in the Palestinian city of Ramallah. 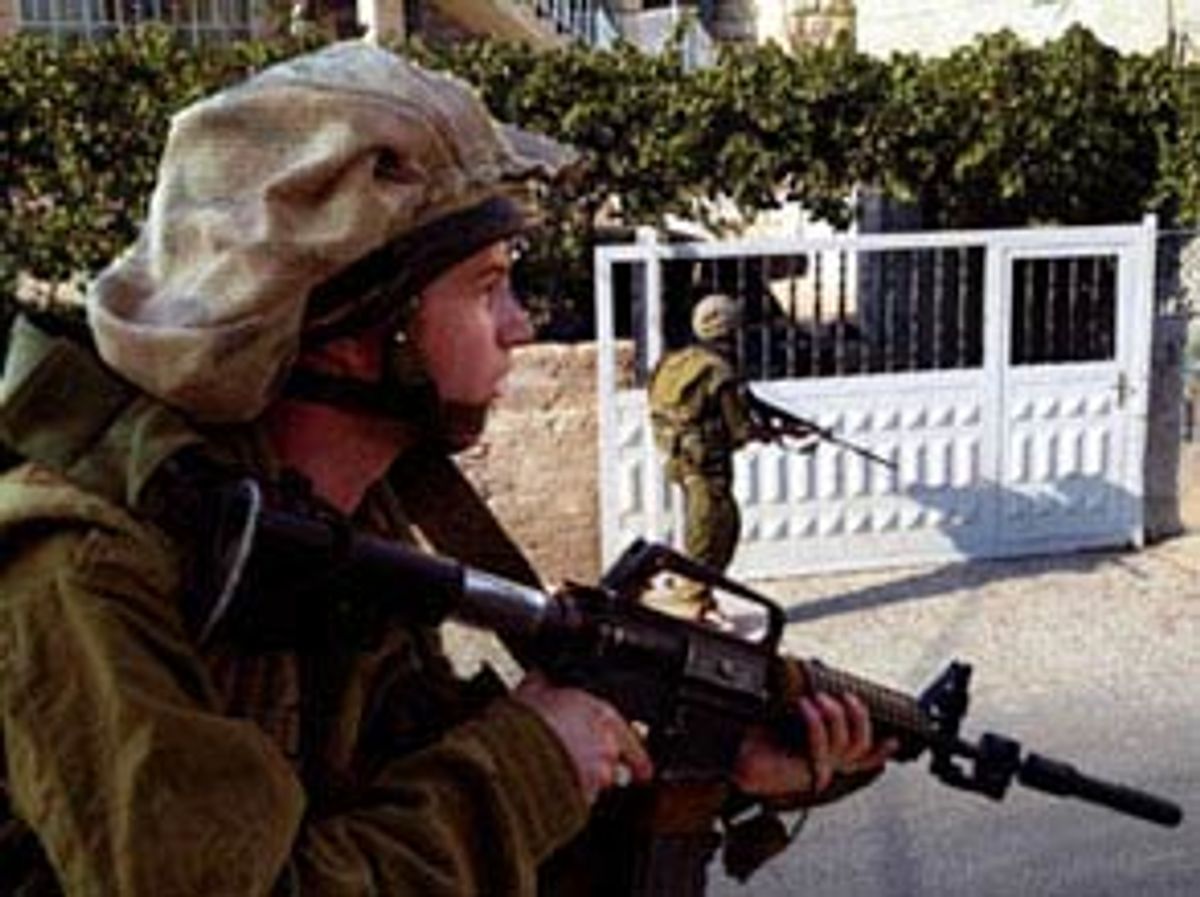 Thursday started off like most other mornings during this two-week-old Palestinian uprising. The Israeli radio reported cities were calm -- the rock-throwers and gunmen sleep late -- and matter-of-factly updated the death toll, as if "95 dead," most of whom were Palestinian, were just another stock price.

Then the word "lynching" hit the air, followed by "tanks," "helicopters," "missile boats" and "rockets." A target 500 yards from Palestinian leader Yasser Arafat's headquarters was hit by missiles. The Israeli army deployed tanks around all Palestinian towns.

By sunset, it was war.

Two Israeli reserve soldiers were lynched by a mob after they drove their private car with Israeli license plates into Ramallah, a West Bank city surrounded by checkpoints under full Palestinian authority, on the way to their base.

The two men were apprehended by Palestinian police and escorted to a station in the city center. (A third stump of a body, charred beyond recognition, was later found in the abandoned car.) Word spread among the crowd loitering on the sidewalks of Ramallah that the arrested Israelis were members of an undercover unit, packed with explosives or, depending on the rumor, armed with silent weapons, who had come to kill Palestinians. Israeli authorities claim the soldiers simply took "a wrong turn" on the way to their base.

The crowd quickly morphed into a dense, manic mob. The mob overran the Palestinian police (at least six policemen were injured in the scuffle), penetrated the station and beat, kicked, stoned and clubbed to death the captive Israelis. Shaky video footage broadcast on Israeli TV shows the police spilling out of the building, limply holding riot sticks and looking helplessly at the jubilant crowd. An woman rushes out, smiling with excitement. Young men with mod greased-back hair raise their fists in the air as if to say: "We kicked ass, dude ... God is great!"

The camera then focuses on the second-story window of the station: One of the Israeli soldiers is tossed out, smearing blood all over the stone fagade and hitting a tree before falling to the ground. Immediately after impact, that body is swallowed by a dense pack of men, who, lurching forward and striking down -- one of them armed with a metal gate -- presumably finish off the job.

Even before these images were released, the news of the lynching was greeted in Israel with extreme consternation and steely anger. It made past confrontations, during which deadly blows and niceties like "Kill the Jews" and "Death to the Arabs" were traded, seem puny in comparison.

"It's indescribable. Barak wake up! Barak wake up!" shrieked an Israeli woman on national radio, venting her frustration at the Israeli prime minister.

Israeli reaction followed swiftly. Israeli missile boats patrolled the coast of Gaza while helicopter gunships fired rockets at several targets in the Palestinian territories. One was aimed at a Palestinian coast guard base, only 500 yards from Arafat's government compound; another hit the base of "Force 17," Arafat's personal guard in Gaza.

In Ramallah, the Voice of Palestine, a radio station that has been whipping up Palestinian hatred and inciting people to go fight the Israelis with nonstop revolutionary songs, was silenced by a rocket. Israeli choppers also hit the police station where the lynching took place and the Ramallah headquarters of the Palestinian police.

"This is a declaration of war," said Marwan Barghouti, a leader of Arafat's Fatah party. "They are out to kill.''

Eighteen people were wounded by the strikes in Gaza, 25 in Ramallah. But the Palestinian casualties were not enough for some Israelis in light of what happened in Ramallah "Two helicopters firing rockets ... This is embarrassing!" deplored Uzi Landau, a right-wing member of Parliament.

By hitting a target close to Arafat's headquarters without actually pummeling his office, Israeli Prime Minister Ehud Barak probably meant to send the Palestinians a warning more than anything else.

"This action is a token signal to the Palestinian Authority leadership that the Israeli army will not sit idly by when acts of violence are committed," said a spokesman for the Israeli Defense Forces.

After days of verbal threats and suspended deadlines, during which Barak has tried to give diplomacy a chance, many Israelis, confident in the might of their army, feel their government should use more force. Even Yossi Sarid, a pro-peace member of parliament, diagnosed that Barak's restraint "has been misinterpreted [by the Palestinians] as a sign of weakness."

To Palestinian ears, such talk is bewildering. As far as they're concerned, Israel has been launching a war against Palestinian civilians from the start of the uprising two weeks ago. They point to the heavy Israeli weaponry, deployed for days (anti-tank rockets, for example, were used in Gaza early in the uprising), and to the scores of people killed by live ammunition and rubber bullets fired by the Israeli army and police.

In reacting to Palestinian violence such as the gruesome lynching witnessed today, Barak is faced with a number of problems. First, each time Israel uses its military arsenal against the Palestinians, it loses a decisive battle in the arena of world public opinion.

Although an increasingly large number of Palestinians wield rifles and automatic weapons, the overwhelming majority of Palestinian demonstrators are armed only with stones. Teamed against the Israeli army, the strongest and most modern in the Middle East, the Palestinians are the underdog many kindhearted television viewers naturally root for. The Palestinian children maimed and killed by indiscriminate shooting does not help shift international sympathies in Israel's favor either.

Given all that, Barak's preferred mode of action so far has been to pledge restraint in the field and hope that diplomatic pressure will prod Arafat into bringing the street violence to an end. This implies, however, that Arafat is in control of the situation and can turn the riots on and off with a switch.

It is the consensus among Israelis that Arafat has abandonned the peace process and is stoking the violence. "There is no doubt that the Palestinian Authority was involved [in the lynching today] and there is no doubt that the Palestinian mob was given a free hand to do whatever it wanted," said Nachman Shai, an Israeli government spokesman. "That shows by itself the character of people that we deal with ... and it shows that Yasser Arafat is doing everything he can to put the entire Middle East on fire," he said.

That may be pinning too much blame -- and too much hope -- on one man. Arafat was chosen to head the Palestinian Liberation Organization 30 years ago, when "Lyndon B. Johnson was president of the United States and the Soviet Union was led by Leonid Brezhnev," Danny Rubinstein, an Israeli journalist who writes about Palestinian affairs, noted recently. "Arafat managed to survive all these years, among other reasons, because he was wise enough not to anger his people too much."

"The same is true now," wrote Rubinstein in Ha'aretz newspaper. "When the riots broke out, Arafat realized that he would have a hard time putting down the popular outburst," and chose instead to go with the flow, leaving decisions to ambitious militia commanders and mob leaders on the ground.

The Ramallah mob scene was in some ways a repetition of the mob scene in Nablus last Saturday, when a Jewish shrine was abandoned by the Israeli army, placed under official Palestinian protection, only to be sacked, dismantled and burned down by rabble-rousers armed with crowbars. If the lynching in Ramallah proved anything, beyond a horrific thirst for vengeance, it is that Arafat's security services are incapable of policing their own people.