At a state beauty pageant, one contestant sabotages her chances by telling the sordid truth. 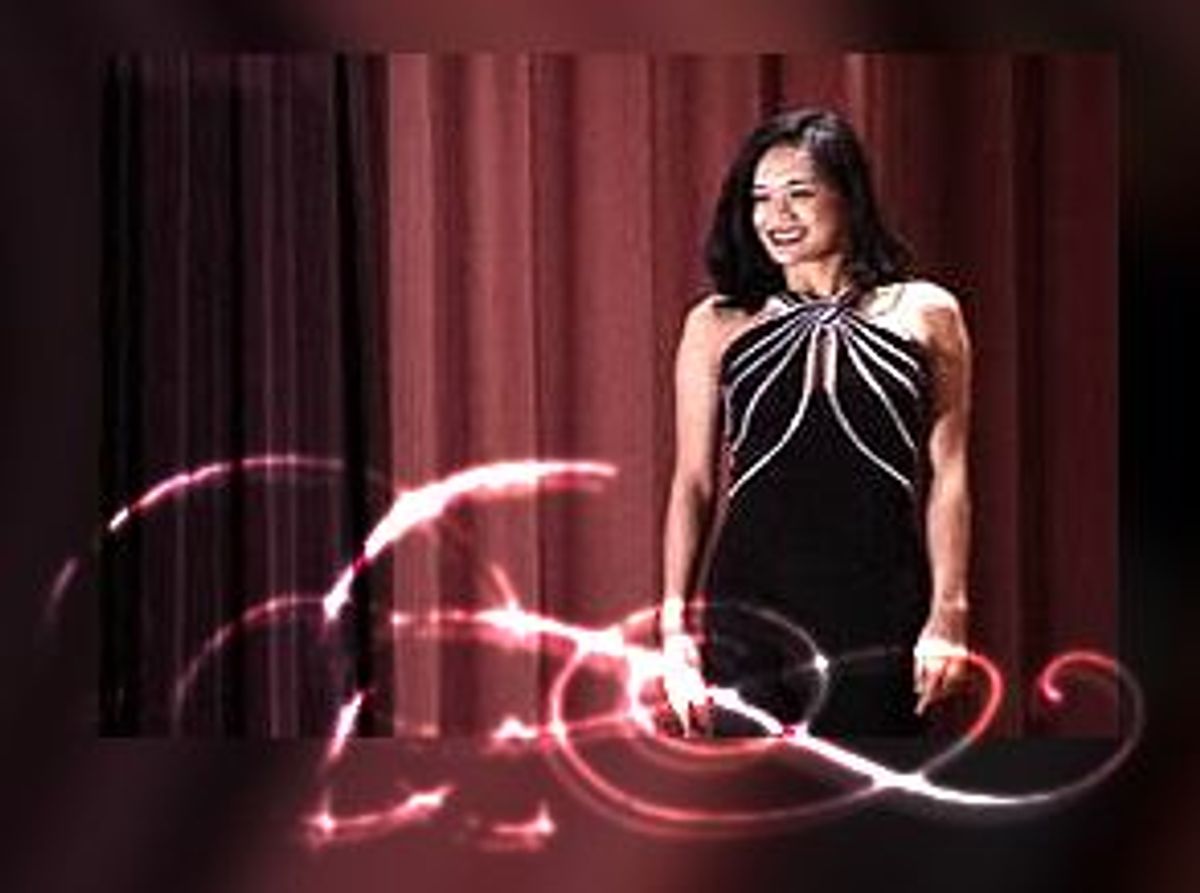 At some point during the interview competition of the Miss New York Pageant, I turned off the judges and lost the crown. In 12 short minutes I was supposed to convince seven people that I was the best state representative for the 2001 Miss America Pageant. I could hardly persuade myself of that, let alone strangers.

A week earlier I had signed the required contract of 70 prerequisites, promising that I had never been "involved in any act of moral turpitude" and that my "good moral character" was intact. I knew I was in trouble when the only stipulation I could fully guarantee was clause No. 6: "I have always been a female."

My pen wavered as it approached the X at the end. With the public notary peering over my shoulder, I signed on the dotted line and prayed my skeletons would stay in the closet. The pro bono pageant attorney, who went over the 12-page document line by line during orientation, had failed to define bad moral character, but I was betting I'd already ruined my chances.

The Miss America Organization is wary of Miss New Yorks. Historically, they've been bad P.R. First there was Vanessa Williams and her Penthouse spread. Then we had Helen Goldsby's announcement on "Geraldo" that the Miss New York officials were control freaks, and that whether she'd had an affair with a married man was her own business.

Having competed on and off for six years, I felt sympathetic to these fallen Miss New Yorks. I knew how utterly boring it is to pretend to be so damn good. In the past, I'd admire a lovely, mature-looking contestant who claimed to be a virgin, a teetotaler or a straight-ticket Republican. Now I'm inclined to believe she's disingenuous, a hypocrite or as dull as crumb cake.

My experience with beauty pageants began with Miss Vietnam-Oklahoma in Oklahoma City. I was 17. A relative was running the pageant and needed Vietnamese contestants. I entered and placed second runner-up. (My American accent was too prominent, the judges told me afterward.) I resolved then and there to win a Miss America preliminary.

At 18, I became Miss Tulsa 1994 and went on to compete in the Miss Oklahoma Pageant. There, older contestants assured me that only the veteran contestants stood a chance at winning a state title. If I hung around a few more years, I might actually be able to take the coveted trip to Atlantic City, N.J.

Nonetheless, I began to observe what most pageant officials already quietly knew -- that despite claims that the Miss America Organization exists solely to promote the education and scholarship of young women, a disquieting trend persists: Many contestants opt for a substandard academic curriculum to have more time to prepare for pageants. I saw dozens of contestants leave school for a year, transfer to remedial community colleges from state universities or drop out of higher education altogether when the pageant bug got too hungry.

My own myopic desire to win remained, though part of me knew that a long-term pageant career could have dire educational consequences. So I quit pageants for a few years until I was safely enrolled in a graduate program at Columbia University. From there I could compete for Miss New York without worrying about being an unschooled beauty queen should I lose. But little did I know how much I'd changed during the four-year hiatus from pageants.

It was minutes before the interview -- the most important competition of Miss New York Pageant 2000 -- and I was trying to calm my nerves with mindless conversation. "The fact that I'm a part of the Miss America system makes me proud; I feel so honored to be here that it doesn't matter if I don't win," said one contestant, a slightly overweight girl who wore huge bifocals. Her performance for the talent competition was a lyrical sign language dance to "Colors of the Wind" from "Pocahontas." I looked at the other contestants, who smiled as frozenly as I did, probably thinking the same thing: Her talent wouldn't stand a chance in the Top 10 anyway and she knew it, so why not smile?

"Being Miss New York would be an extension of what I already do as an elementary teacher -- educating our children," said Miss Staten Island, who also dreamed of becoming an opera singer. Miss Amherst, a health club trainer, made more or less the same claim: "Making sure young people stay physically fit is my greatest concern. I can't imagine a more pressing issue in our society today." Then the conversation turned to other important issues: "Where did you get that blouse? Are you wearing a St. John's three-piece knit?" inquired Miss Heart of New York, fingering the fabric of my suit. Other contestants debated the difference between Bobbi Brown and Estie Lauder under-eye concealer.

I had a panicked thought: I can't be Miss New York. How can I be a role model for today's youth when half of my friends are coke addicts? I had to do something. I would stop this charade right now and clear my conscience. Untruthful living is like bad acting; it hurts to watch and the audience will boo you before the curtain closes. I was itching to tell the judges about the hundreds of nude photos my boyfriend had shot of me on his roof deck, that I've been having sex since I was 15, that I believe all 28 Miss New York delegates were, like myself, acting out exhibitionist tendencies and could care less about diabetes awareness. I wanted to invite the judges to the Budweiser party several contestants and I were having in our Ramada Inn suites, and spare them their lime sherbet punch with the Kiwanis.

"You're up next," said the volunteer host, whose primary function was protecting the door to the interview room. He waved me over, smiling enigmatically, like some perverted guardian of the gateway to hell. "You'll do just fine," he said, patting my back. I thought I felt his hand sizzle. "Just be real and natural. Express yourself honestly. They will only appreciate it. I heard they're looking for authenticity this year."

Authenticity? What were they looking for last year? The door swung open and I was shooed into the cramped, bright conference room where my seven interlocutors sat. "Miss Pride in the Empire, Julie Pham," announced the host, who then quietly stole away, closing the door behind him. I faced four men and three women, mostly in their late 30s and 40s, who sat rather close to the wooden podium in the center of the room where I was to stand. There was no way to hide my limpid expressions.

I began my memorized introduction: "New York is one of the most dynamic and diverse states in the U.S. It is a place where people of any race or culture can easily fit in." As I spoke, I did what I was taught to do in my mock-interview lessons: Look every judge confidently in the eye from the left side of the room to the right. I noticed all four men wore a single diamond stud in their right ears. "I think Miss America can have not only a national platform but an international perspective, which is why it is a privilege and a pleasure to be here as a contestant of Miss New York State today," I concluded, smiling expectantly.

"Julie, do you prefer to live in the country or the city?" This from a female judge, rumored to be friends with the executive director. I hesitated, knowing her seemingly benign question had political ramifications. Since the pageant headquarters was in Watertown, N.Y., 40 miles south of the Canadian border, the Miss New York Committee was determined to have a queen who would live upstate without complaint.

Historically, winners from the New York City area flagrantly disregarded this obligation, refusing to live anywhere near cows or grass. But I was at an advantage: I was raised amid grass and cows in Oklahoma. Still unsure if they would buy this, I dived in nonetheless: "I'm from Oklahoma. I lived there for 18 years, so I'm used to trees and the sound of crickets. But when I moved to New York for graduate school, I learned to appreciate the pace of big cities and international cuisine." And the Vera Wang Fall Collection at Bergdorf's, I thought privately. "So it's a real tossup." I finished, straddling the question like a politician.

"Julie," began the chief judge, a superintendent from New Hampshire. "Your fact sheet says you made a documentary in film school. Could you tell me about the subject matter of your documentary?" I froze momentarily, knowing this line of inquiry could prove dangerous. "Absolutely. I directed a documentary about escort services in Manhattan." Dead silence. "Escort services," he repeated.

"Yes, sir. It's about college women who fund their education through prostitution," I continued. More dead silence. I reminded myself that the judges wanted authenticity. "I'm fascinated with New York City subcultures -- underground sex industries, the low-level mob, that sort of thing." I paused again, waiting for someone to interject, but no one did, so I continued rambling. "A colleague of mine at Columbia used to be an escort, so the idea was sparked by my conversations with her." The ex-beauty-queen judge looked at me blankly, then over at her fellow judges and back down again at my fact sheet. Another judge, a theater director, appeared bemused. The rest just shifted uncomfortably in their seats or crossed and uncrossed their legs.

Screw it, I thought. They want authenticity? I'll give them epistemological analysis. "Although it seems unlikely, because they are polar institutions, I noticed a parallel between escort agencies and beauty pageants -- girls financing their education by capitalizing on their feminine potential as women," I said, and with that slaughtered my chances of winning.

I had hung myself. The crown was gone. I had just fulfilled the most perversely forbidden fantasy of my entire pageant career: I gave the judges a frank, unadulterated opinion, and predictably, it bombed. Not only did I come across as a liar -- it doesn't take a genius to figure out that a person mesmerized by urban subculture would never live among cows in Watertown -- it became obvious I had broken the "never have been engaged in dishonest, immoral, immodest, indecent activities" clause of my contract.

Miss Amherst, the statuesque health fanatic with the Fitness for Kids platform, was eventually crowned Miss New York. In retrospect, I still believe the judges wanted someone "real," but only a person to whom they could relate, the conventionally real woman of their fantasies.

The Miss America Organization states its mission as providing "a forum in which to express [women's] opinions, talent and intelligence." But what they forget to tell you is that theirs is a selective forum with delicate hearing, prone to deafness. Which is why the only real opinions ever expressed by contestants come in whispery snatches of conversations backstage during rehearsals, past guarded dressing rooms and behind bathroom doors.

Julie Pham is a graduate film student at Columbia University, and Miss Pride in the Empire 2000.