Robot buddies will lead our children into a bright future, says Mark Pesce in his new book, "The Playful World." 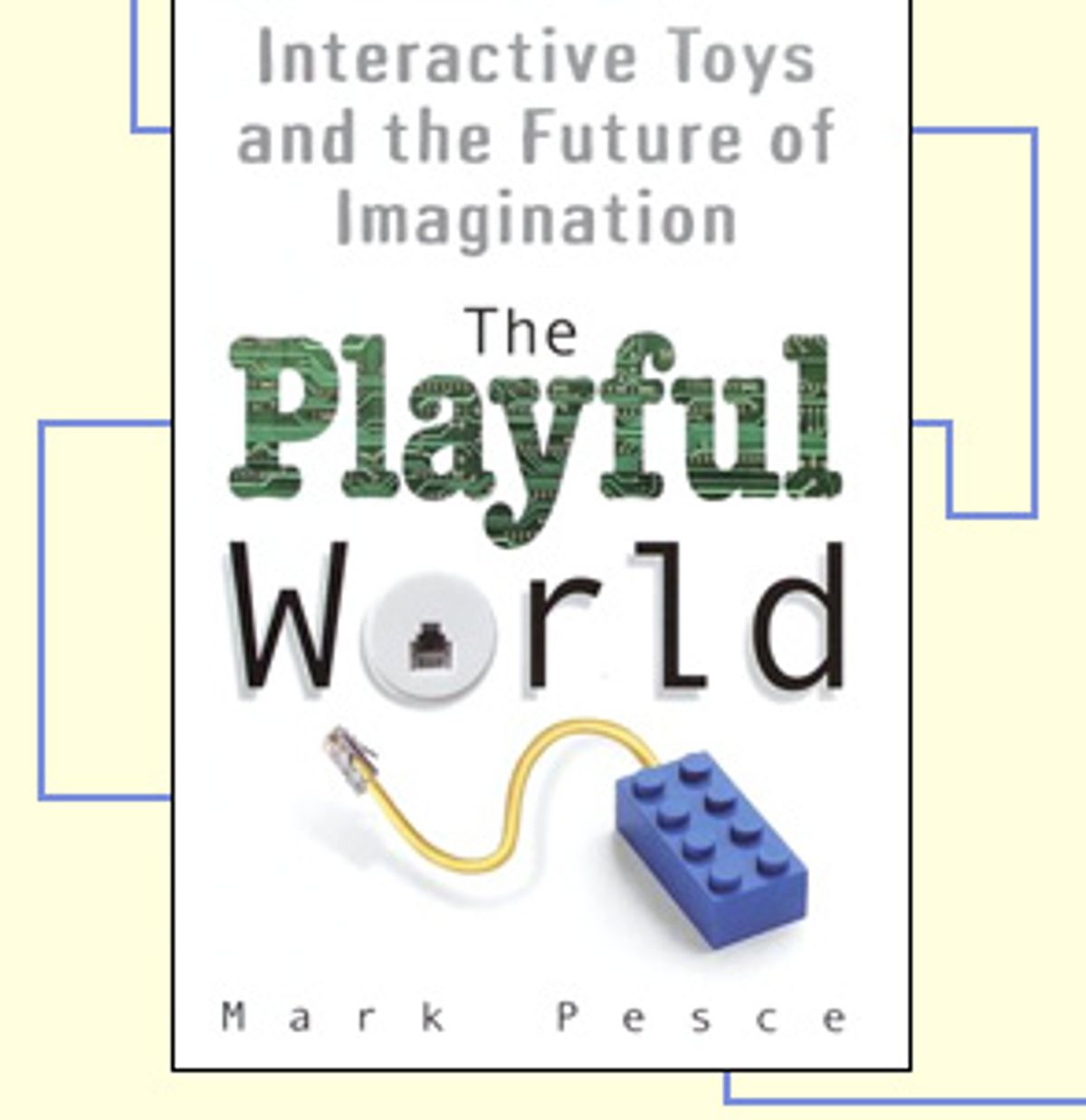 A cynic might easily imagine that the timing of the publication of "The Playful World: How Technology Is Transforming Our Imagination" is no coincidence. Just in time for the Christmas shopping season, here's a book extolling the joys of the newest techie toys (dedicating 10 whole pages to the wonders of the upcoming Playstation 2) and making a serious claim that computerized playthings will transform future generations into more empathetic, well-rounded individuals.

But Mark Pesce's new book is far more than a cannily timed shill for the toy industry. Pesce, the founding chair of the interactive media program at the University of Southern California's School of Cinema-Television, is an eloquent geek optimist, firmly in the tradition of Buckminster Fuller, who hopes to bestow a future of technological breakthroughs on the minds of our children. "The Playful World" isn't a buying guide for the holidays; it is a utopian explanation of the concepts underpinning virtual reality, robotics and artificial intelligence that just happens to conflate cutting-edge technology with consumer culture and offer it up as one big steaming plate of good-for-you oatmeal.

As Pesce muses, "Today, we and our children are amazed by a synthetic creature possessing a dim image of our own consciousness and announcing the advent of a playful world, where the gulf between wish and reality collapses to produce a new kind of creativity."

So despite what the book jacket blurb declares, toys are not the focus of "The Playful World"; they are merely a jumping-off point to talk about future technological wonders. Pesce begins with Furby and walks us through robot toys like the Sony AiBo and the upcoming robot doll My Real Baby (which leads into a discussion of robotics and artificial intelligence), the Lego Mindstorms toys (which draw us into the world of nanotechnology), the Web (the notion of databases of "collective intelligence") and video games and virtual reality (VRML, haptic interfaces and so on).

If you're coming to this book because you think you'll learn about a lot of whiz-bang gadgets that you can buy for your kids, you'll be disappointed: Pesce mentions only a handful of toys that you'll find at your local high-end K-Mart (and most of these are listed above). Instead, he focuses his energies on fun future applications of modern technology that are only just now emerging from the research stage: robots that are still half-assembled at the MIT Media Lab, a Web-controlled Ouija Board, an obscure art exhibit that lets 20 users a day "float" in a virtual reality environment. Much of the playful world he envisions is still several decades away.

Pesce's future is decidedly utopian. He enjoys envisioning an anonymous "millennial child," who he imagines nurturing a robot baby to adulthood, saving the planet after playing an environmental simulation game and becoming a molecular engineer after twiddling with a nanotechnology toy. Technological innovations that we are still dreaming up, declares Pesce, will allow this child to boast "creative abilities beyond any we have ever known"; will enable access to "a shared digital imagination where we can experiment with the forms of the future." And, even more ambitiously, he believes that those intelligent, perceptive robot buddies will "help us raise better, more caring people from the infinite possibilties of childhood."

Even today's more modest gadgets are viewed through rose-tinted glasses. Take, for example, the Playstation 2, a networked video game system with impressive graphics due to debut in the United States at the end of October. Pesce describes the console's capabilities and then effuses about its potential influence on our psyche: "The Playstation 2 becomes more than a toy; it becomes a window onto a wider world, a web of worlds, each more fantastic than the one preceding it."

And you thought video games were just for blasting monsters or practicing your kung-fu kicks? Still stinging from the accusations leveled at the gaming industry after last year's Columbine massacres, Sony will probably read these lines and cheer: The most expensive ad agency in the world could not have written more glowing marketing copy.

Perhaps it's a case of overcompensation. Much of "The Playful World" seems designed to respond to accusations that technology -- currently, video games and the Web -- will turn our children into automatons who can't interact with the world around them. Instead, Pesce believes, a good computer game and, say, a personal robot will prevent future problems: He believes future children will see the world as "potentially vital, intelligent, and infinitely transformable." Throw away that Prozac, and just buy your kid a My Real Baby instead!

Pesce's enthusiasm is infectious, even if you subscribe to a more "Matrix"- or "Diamond Age"-like dystopian vision of the potential impact of artificial intelligence or nanotechnology. After all, scenario building is mostly a matter of opinion; who can say whether Pesce's cheerful playful world will in fact be the one our grandchildren live in? Sure, robots with machine intelligence could destroy our world, but they also could, as Pesce envisions, "become the steadfast servants of a generation who can think locally yet act globally."

One of the book's greatest weaknesses, however, is that Pesce refuses to contemplate the downside of technology -- except for a momentary musing about "gray goo" (nanobots running amok, recycling atoms until the world as we know it disappears). Pesce doesn't ponder, for example, whether fancy innovations will merely widen the gap between haves and have-nots. If gadgets like nanotechnology kits or personal virtual reality machines truly build better minds, then are the vast portions of the population that can't afford them dooming their progeny to a lower rung on the evolutionary ladder?

Still, Pesce pulls together his argument with an impressive amount of research; "The Playful World" offers cogent explanations of complicated technologies and social theories. Especially considering how far Pesce travels -- from the genesis of the Web to the early days of artificial intelligence to the invention of nanotechnology, not to mention theoretical references ranging from Sherry Turkle's online research to Jean Piaget's studies of childhood development. Pesce is a master at distilling complex ideas down to their most important elements and explaining them in layman's terms.

Pesce covers so much ground that there are moments when it feels as if he is juggling too many ideas at once. But Pesce's point is that these distinct technologies will, in fact, eventually converge. As he writes, "the history of the playful world is a history of concrescence; seemingly distinct advancements in artificial intelligence, robotics, virtual reality and the Internet actually comprise one overarching wave of transformation, changing what we know by transforming how we come to know it." But the big picture that Pesce draws is actually a fragile vision built from loosely related technological breakthroughs, some current research, a handful of toys and art projects -- and a whole lot of imagination.

That doesn't necessarily negate his vision: His central idea, that "in play we learn truth," is an important one that few pundits have bothered to pen during the last decade of digital dreaming. And boy, it's a nice one: That $30 Furby doll isn't just a nifty gadget, it could be a gateway to a future of better children.

Truth, or fiction? Either way, $30 is a small price to pay to find out, and your kids will probable love it regardless. Merry Christmas.