How racquetball saved my marriage

Sometimes you need to play rough with your husband. 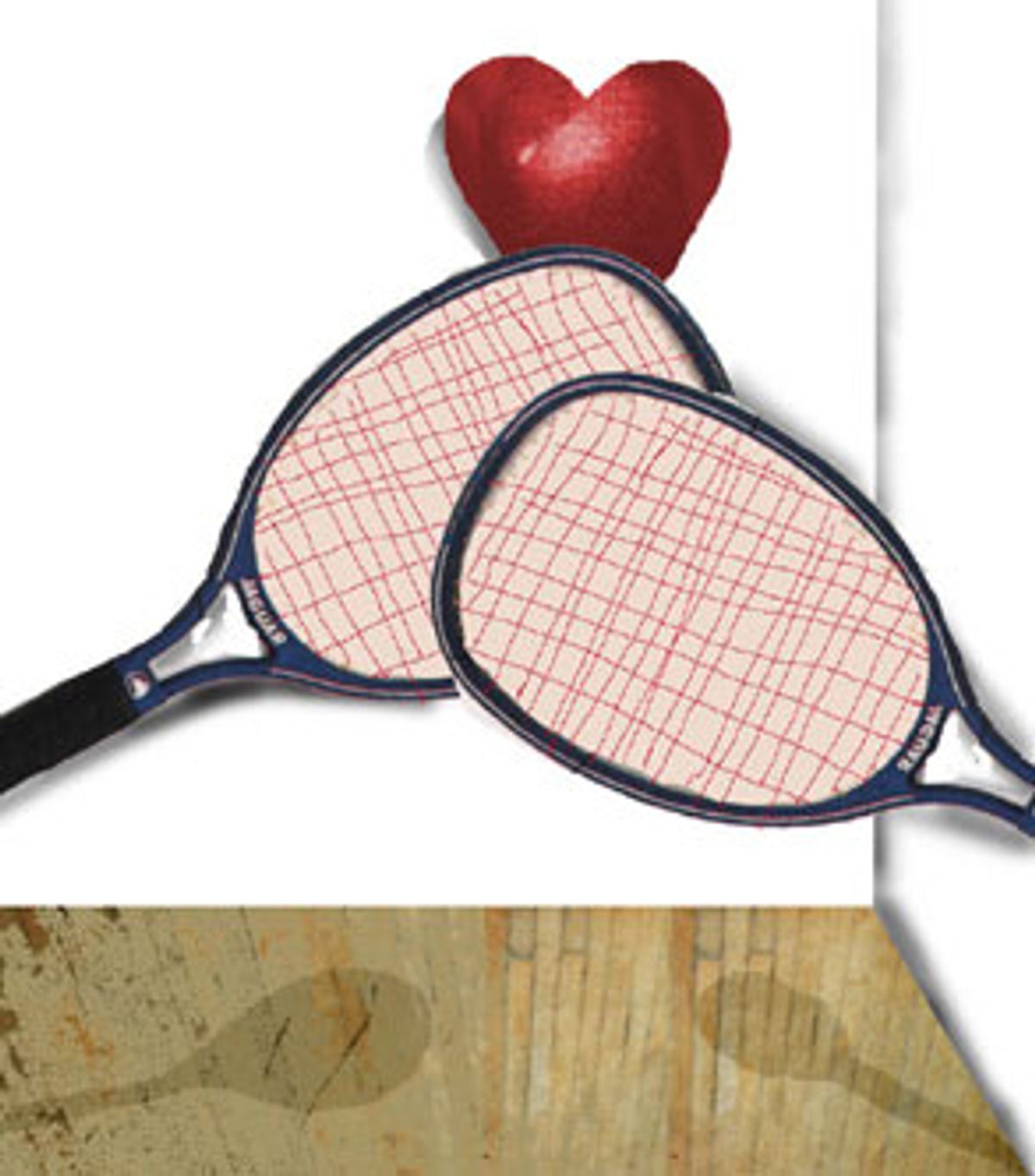 My husband and I used to wrestle. We were younger then, more nimble, more sassy, more agile and a lot more fun. We'd wrestle when we were mad -- not big-time mad, just frustrated, "you're driving me crazy" kind of mad. It would start with a growl, then a yelp, and the next thing you know we'd be on the floor of our loft, tumbling and twisting, one under the other, relieving pent-up frustration and laughing maniacally until one of us would shout, "Uncle!" That would usually be moi, not because my husband is bigger than me -- he isn't, we're about the same size -- but because he was a wrestler in high school and knows all the sexy moves. Anyway, we would usually end up in some loving embrace and then calmly resume whatever we'd been doing before -- bills, dinner, washing our socks or having a conversation about houseplants.

But those days are gone. We traded the loft for a house, had a couple of kids, got some life insurance, made a will and started the slow climb toward 40. Needless to say, we don't wrestle anymore. I'm sure if we did, we'd be spending a lot more time with our chiropractor, Jay, and we can't afford that with all the other domestic expenses we've incurred.

Yet, what to do with those wacky marital emotions, all those annoying and evil thoughts we've had about each other all week? I told him to buy milk! She's frigid! I haven't had sex in three weeks! When was the last time you changed a diaper? Where are my socks? Try your sock drawer, for God's sake!

And on and on. Marriage can be one giant wrestling match of the heart, and navigating yourselves toward harmony, humor and happiness can be a mighty big challenge. Throw in a teether, a toddler and way too many sleepless nights and you've got yourself a lot of potential negative energy. The wise couple needs to have things in place. We've got our Friday night dates -- candles in the bedroom, a sex toy, a trusty babysitter, a great local movie theater and cheap Vietnamese food. But best of all, we have racquetball.

Racquetball, game of love. Racquetball, that crazy, whack 'em, smack 'em, "I'll show you who's boss" game. We love it. I think it's saving our marriage.

We joined a health club a couple of years ago because between working and keeping up with the needs of our small family, we weren't spending enough quality time together. We needed something just for us. We needed some fun.

Now, racquetball is not a nice game. It's not a gentleman's sport like, say, badminton or croquet. Racquetball is a nasty, aggressive, foulmouthed game. It's perfect for couples who need to exorcise their mean and evil ways.

The game itself is sort of like tennis's bad-boy cousin. You've got a racket, a hard little rubber ball and a room big enough to dodge, dash, scramble and slam around in. The ball comes at you fast and there's no time to think or orient yourself. You've got to get in the ball's way and out of the ball's way; you've got to jump, leap, hustle and lunge. It's got a rabid quality about it, just this side of ferocious.

I must admit, in the beginning I was not a good sport. If my husband was beating me, my bottom lip would jut out and steam would pour from my ears. I'd whack the ball really hard and shout things like, "Come on, just play!" Sometimes my racket would fly out of my hands. (OK, I threw it a couple of times.)

"OK, OK," I'd say, "just calm down." Sometimes I could pull it together and restrain myself from acting like a 4-year-old, but sometimes I couldn't and he'd call it quits. Still, after two years of playing together, I've become a much more grown-up partner, and it's probably had an effect on other areas of our marriage where I had wanted to spit and kick and claw instead of using my words.

Line calls can be troubling, however. I had to get some prescription goggles so I could actually see the ball. But sometimes there's a discrepancy between what I think I see and what Mark thinks he sees. In those cases, we leave the line calls up to Jesus, the Lord, our Savior. We take it over, and whoever wins the next point was right all along. "Thank you, Jesus," the victor will mutter. It's usually me, because I'm Jewish and I get a thrill out of getting the Lord to help me with my game. But Mark, a Methodist by birth, will also sometimes pray on the court. These spontaneous moments of religious devotion are, for us, a very tender perk that we didn't expect to have included in our price of membership when we joined the club.

Sometimes one of us will hit the other person with the ball. At first I took it personally. "Hey!" I would scream. "That hurts!" And then I'd get all fussy, as if he'd done it on purpose. Sometimes this would result in a thrown racket. But since I started using my words and told him that I needed him to apologize, he now comes up to me with a big smile and says, "I'm sorry," and I immediately feel much better. It's so preschool, but it's great. It's worth the whole game to me.

And then there's just the pure joy of being in a little, white room, sweating and screaming at the top of our lungs. I always find I have more than enough to scream about: the mounting bills, my fledgling career as a freelance writer, our toddler who moonlights as the devil, fears that my St. John's wort will run out before I have a chance to get more. Not even our therapist can give us that kind of release.

Sure, we miss the wrestling. But occasionally my husband and I will both smash into the racquetball wall at the same time and fall into each other. Dazed and starry-eyed, we'll look at each other with crooked little smiles.

"You look really good in those shorts," Mark will say.