A Mideast military expert discusses the bombing of the USS Cole and the terrorist threat in Yemen. 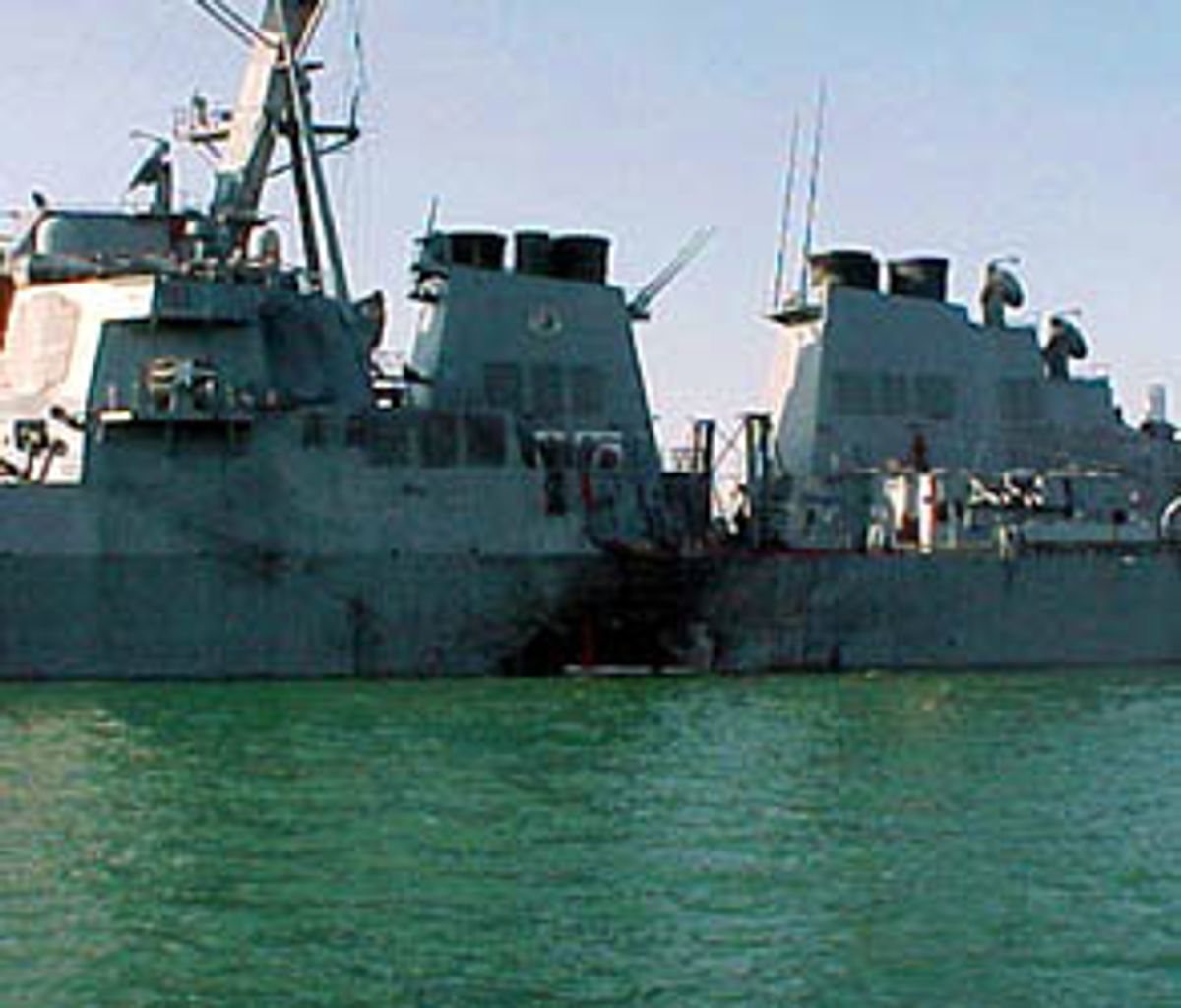 Thursday's bombing of the USS Cole at Aden, Yemen, appears to be the worst act of terrorism perpetrated against Americans since the 1998 bombings of U.S. embassies in Kenya and Tanzania. Experts now believe it signals a return to a terrorism scare that had remained eerily silent for two years.

A small civilian boat dispatched by the port authority to aid in the mooring of the ship -- in port for several hours to refuel -- was packed with explosives and at least two apparent kamikaze terrorists of unknown affiliation. The boat exploded while in close proximity to the 8,300-ton cruise missile destroyer -- blowing a gaping 20-by-40-foot hole in the Navy vessel so big it could be seen from across the harbor. When the dust settled, 17 American sailors were dead and 30 more injured.

Following the 1998 embassy bombings, the United States launched a worldwide manhunt for suspected international terrorism mastermind Osama bin Laden, whose name will inevitably be associated with the bombing until the culprits of the USS Cole attack are identified and apprehended. The bombing is embarrassing for Yemen, a developing Middle Eastern nation that has sought to squelch terrorism and build ties with the United States and the West to strengthen its economy. It also raises questions about the soundness of the U.S. Navy's policy in docking its ships in civilian ports and the strength of American intelligence operations in the region.

Though the USS Cole blast hasn't been officially designated a terrorist incident, that is certainly how the U.S. is treating it. Speaking at the White House in the Rose Garden Thursday, President Clinton said, "If, as it now appears, this was an act of terrorism, it was a despicable and cowardly act. We will find out who was responsible and hold them accountable." And Friday, Navy explosives experts confirmed that the explosion had come from outside the USS Cole, lending credence to theories that it was a terrorist act. Still, no group has come forward to claim responsibility.

Salon spoke with Jamie Etheridge, analyst for Middle East and African affairs at Stratfor, about the USS Cole tragedy and the danger of terrorism in Yemen. Stratfor is an influential Austin, Texas, intelligence consulting firm that made its name by exposing inconsistencies in the official American explanation of its erroneous bombing of the Chinese Embassy in Belgrade during the NATO campaign in Yugoslavia. It has since become a fast-rising and reputable source of international military intelligence.

There is a known terrorist risk in Yemen. It's only been in recent months that we have used the deep port at Aden for refueling stops. Why does the U.S. military use the port when there is a known threat of terrorism?

There's a strategic interest in the U.S. military in Yemen, and using the refueling station is an important step in building military relations and a military presence in Yemen. The U.S., Russia and China all compete for control of the strategic shipping lanes around the world, and the U.S. and Russia have both been in competition for a presence in Yemen because it's a choke point. Its location at the tip of the Arabian Peninsula is extremely important for shipping oil out of the Persian Gulf as well as traffic through the Suez Canal, the Red Sea and the Indian Ocean.

Within the last year, the Russian defense minister paid a visit to Yemen to build a strategic alliance. China also recently began building up a presence of corporations and businesses in the Suez Canal region.

Which terrorist organizations have representatives in Yemen?

We identified eight, including two of the main Palestinian terrorist organizations that are designated by the State Department as such -- Hamas and the Palestinian Islamic Jihad. The Algerian Armed Islamic Group, the Egyptian Islamic Jihad and the Egyptian al-Gama'at al-Islamiyya also have a presence. There are also a few smaller, local groups that are listed as terrorist organizations. The largest opposition group in the government is a party called Islah. One of the party's leaders, Abdul Majid Zandani, has been reported to have been a close associate of Osama bin Laden. It's said that he sent fighters to Chechnya to fight against Russia, and allowed bin Laden to train some of his Al Qaida fighters there. Zandani has also met with Hassan Turabi, an Islamic fundamentalist leader and the former speaker of Parliament in Sudan.

Have any of these organizations in Yemen been directly linked to terrorist acts against the United States in the past?

The spiritual leader of Al-Gama'at al-Islamiyya, Shaykh Umar Abd al-Rahman, was tried and convicted for the World Trade Center bombing in New York.

Do you think the inevitable speculation that bin Laden might have been involved is premature?

I think it's a natural reaction to associate him with any terrorist attack. It doesn't mean that he is involved, but there have been numerous reports that link him to Yemen. Saudi Arabia and Yemen are neighbors, and he is a former resident of Saudi Arabia with supposed Yemeni heritage. I've certainly seen enough indirect evidence to say that he has a hand in it. Al Qaita, his umbrella organization of terrorist organizations, is active in Yemen. It seems to be similar to Sudan in the mid-'90s -- it's a place of commonality for a lot of different terrorist organizations. And he is a major player in several of those organizations. He's also spent time in Yemen, though I haven't seen anything recent.

There's been talk of an Iraqi "October surprise" terrorist attack during the presidential elections. Do any of the terrorist groups you've mentioned have ties to Saddam Hussein or Iraq?

I have seen no ties and no evidence to link any of these organizations to Saddam Hussein.

When did the U.S. start building ties with Yemen?

I wouldn't say that we have close diplomatic ties. But we have been developing some type of relationship with them since at least 1993, when U.S. forces used the port of Aden as a base for military operations into Somalia.

This appears to have been a well-planned attack that was probably in the offing before the conflict in Israel flared up. Do you think that reduces the chances that this had something to do with our criticisms of the Palestinians and general support for the Israelis?

The port had several days notice that the ship was coming in for refueling. Granted, it would take some planning, but U.S. ships dock regularly there -- it's standard practice. Even though there are security measures, there are factors that help any terrorist. Remember, the boat was assisting with the mooring and helping with the refueling operation. It wasn't as if it came out of nowhere.

But shouldn't the U.S. screen nonmilitary ships that are used in the servicing of our fleet before allowing them to come so close to our warships?

The security designation for Yemen wasn't the highest, and I wouldn't imagine that they could check every boat that was helping them moor beforehand. That would be impossible.

Is it common for civilian boats to be used in mooring?

Well, the Navy uses the port facilities, and the port is responsible for mooring the ship. They establish a security agreement with the port authority.

We have the most advanced intelligence gathering operations in the world -- we've even successfully foiled many terrorist attacks -- how do you think this went under the radar?

U.S. forces and U.S. interests are all over the world. You have U.S. military ships and installations maintaining security everywhere. You're going to have some problems -- it's impossible to catch everything.

Do you think the U.S. military and State Department will revise their security measures as a result of the attack?

The State Department temporarily closed embassies in several African countries immediately following the incident. Security postures will be on a higher alert throughout the world and especially in the region. And other changes will likely come.

Do you think the U.S., if it's able to determine the origins of the attack, will retaliate?

It's been our policy in the past to do so. When the U.S. embassies in Africa were bombed, we responded by bombing a pharmaceutical company in Sudan because the investigation linked groups there with the bombing. But whether we will retaliate with force against Yemen for this? It's possible but unlikely given the tense situation in the Middle East.