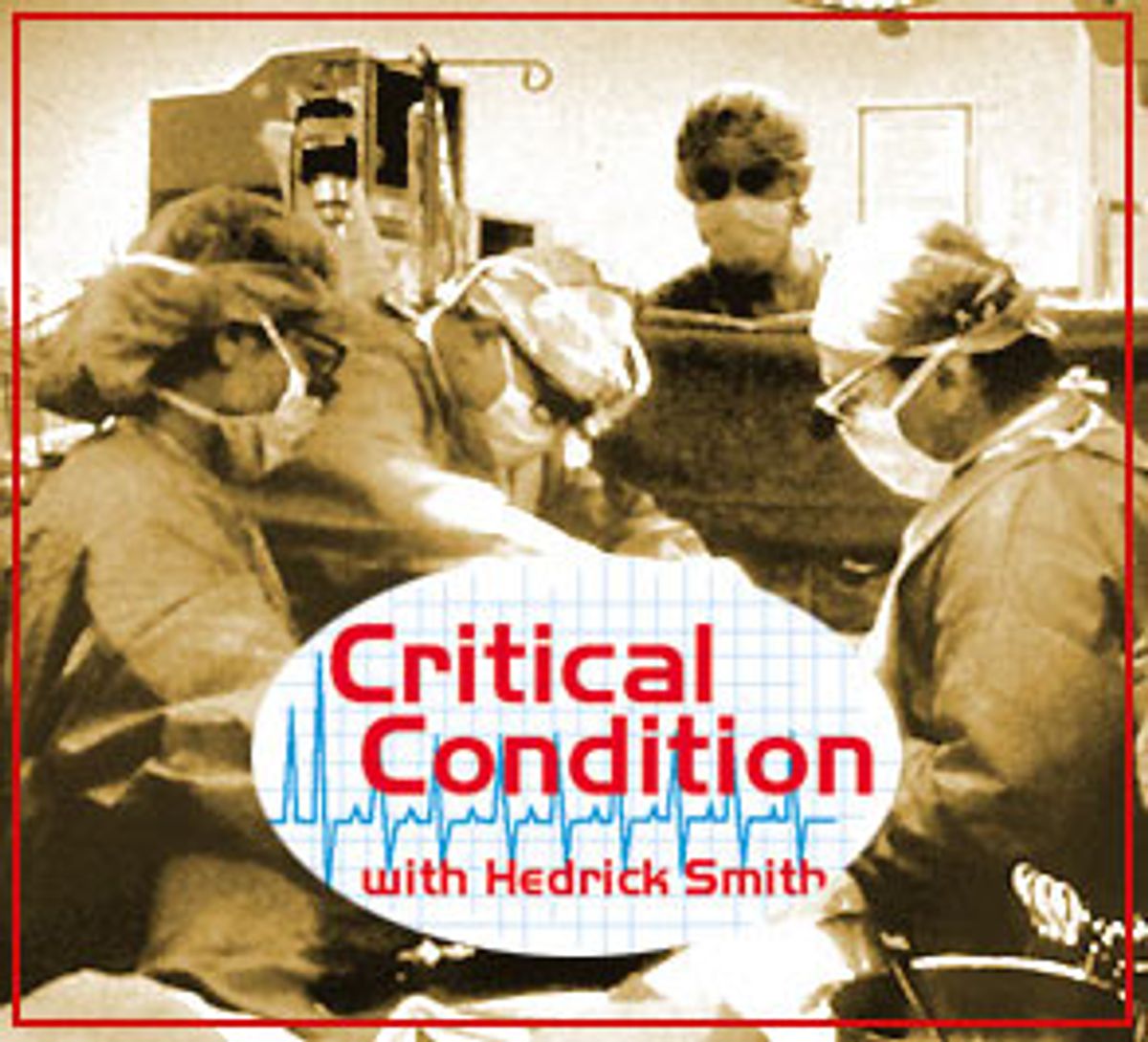 After watching "Critical Condition," journalist Hedrick Smith's damning, exhaustive documentary on America's healthcare crisis, I put down my remote and did two things.

I seriously considered moving to Canada. And then I thought about firing off a memo to Al Gore and George Bush.

See, the only thing that's sadder than Smith's three-hour saga of a healthcare system gone awry is knowing that neither Al nor George has the vision to fix it.

Unfortunately, when it comes right down to it, neither does Hedrick Smith. But at least he's willing to give this patient a thorough exam. Too bad "Critical Condition" wasn't broadcast much earlier in this campaign year -- or at least before the presidential debates -- when it could have given the whole healthcare discussion a giant shot in the arm. But even a day after this week's final chat-fest between the candidates, it's medicine that's well worth taking.

So here's my prescription for Al and George. This Wednesday evening, stop whatever you're doing, tune in to your local PBS station and watch this show. And don't forget the Tylenol. You're going to get a headache -- big-time.

First a note about Smith: Of all the journalists you could name, perhaps no one is better suited to document the sorry state of healthcare in America than he is, and not because he reports regularly on medicine or science (he doesn't).

What qualifies Smith, a two-time Pulitzer Prize winner and former New York Times foreign correspondent, is that he made his mark by pointing out the cracks in a decaying empire, the Soviet Union. His bestselling book, "The Russians," portrayed a people that didn't deserve the political system they got but seemed fatally destined to live with it. So Smith seems like the perfect choice for a documentary on another crumbling monolith -- America's ailing healthcare system.

Fast forward to "Critical Condition." Smith tackles a huge topic by carving it up: First, a look at America's "secret killer," namely the medical errors that plague modern healthcare; second, the plight of the chronically ill under managed care; third, an in-depth look at Kaiser Permanente, a relatively progressive HMO whose good intentions don't always guarantee positive outcomes; and finally, a segment on America's 42.6 million uninsured, whose numbers have dropped during the Clinton administration but whose very existence remains a national outrage.

Smith interviews dozens of patients and experts from New York to California and Tennessee to Texas. And no matter where he trains his lens, he digs up the same kinds of problems, over and over. And even where the system seems to be working, it's only a matter of time before Smith turns over another rock and you find out that things aren't as good as they look.

Take medical mistakes. They've been in the news since an Institute of Medicine report last year estimated medical mistakes cause up to 98,000 deaths a year. Even the usually sober British Medical Journal recently devoted an entire issue to comparing safety procedures in medicine with those in aviation. Statistically speaking, it appears, you're much more likely to get the wrong drug from your doctor than you are to lose your luggage on an airplane.

That's what happened to Claudie Holbrook. A survivor of the Korean War, he died of a blood clot after taking an overdose of Heparin, a blood-thinning drug. Questioned by Smith, his daughter Sandy Reynolds blames the Veterans Affairs Hospital in Lexington, Ky., for giving her father the wrong dosage and causing his death.

Remarkably, the hospital agrees. "I told the Holbrook family that we made the error that we believed contributed solely to his death," says Ginny Hamm, a hospital attorney. "We call it doing the right thing." The apology made a difference and defuses Reynolds' rage. "If they hadn't come forward, I would have wanted millions," she says. "I would have wanted to rip them apart," Reynolds says. Instead, she settled for just $50,000.

So far, so good. There's just one problem: Smith goes next door to the bigger and more prestigious University of Kentucky Chandler Medical Center. There, he finds an administrator who admires the V.A. but thinks its policy of apologizing to patients is nuts; to do that, he insists, would be like throwing his hospital to the malpractice wolves. "Our attorneys would feel that we had no intelligence left," he says.

Chronic illness is another paradox. In this country, as Smith notes, it's not smallpox and syphilis that are killing us; it's chronic illnesses such as cancer, diabetes, stroke and heart disease, which afflict some 100 million Americans. That's a challenge for HMOs, which like to talk about preventive care but cringe when the illness is long-term.

Humana, one of the nation's biggest HMOs, tries to cut costs and improve outcomes through a strategy it calls 'disease management.' Patients who have been diagnosed with a major chronic illness, such as heart disease, are closely monitored before, during and after treatment; nurses call patients at home to check on medications, offer advice and encourage patients to seek help if they have symptoms. Disease management programs have cut hospital visits for patients with congestive heart failure by 60 percent. One in 10 such patients die these days, compared with 1 in 5 before the program began.

But again, there's a twist: To pay for this new program, it turns out, Humana has cut off care to catastrophically ill patients, including Caitlin Chipps, a 12-year-old Florida girl with cerebral palsy.

After Humana refuses to pay for Caitlin's ongoing physical therapy bills, her father sues. Lawyers then discover that not only Caitlin but dozens of other such children have been cut loose by Humana in order to free more money for its disease management program, which apparently does not include kids who need help learning to walk. A Florida jury eventually awarded Caitlin's family $78.5 million -- ironically, notes Smith, "almost exactly the amount that Humana figured it would save" by eliminating care to Caitlin and others like her.

"Critical Condition" turns a more sympathetic eye toward Kaiser Permanente, the nation's largest managed care organization. Smith shows how Kaiser willingly took on the money-losing work of serving people with HIV/AIDS in the 1980s despite fierce financial competition, and decided to start screening patients over 50 for colorectal cancer several years ago even though no major medical group had called for it.

Yet in order to get a sigmoidoscopy at Kaiser, you have to have a personal doctor who'll notice how old you are and order it for you. Vivian Hannawaite, 68, of Fremont, Calif., didn't have one, and by the time she got her sigmoidoscopy, not only did she have cancer but it had already metastasized to her lymph nodes, greatly reducing her chances of survival.

Compelling as such stories are, "Critical Condition" really hits its stride when it visits the presidential candidates' home states of Texas and Tennessee. I can just imagine Al and George calculating how they might use this material for their next political ads. But they might want to wait. Patients in both of their states get screwed. The only difference is how.

In Texas, Jody Beal, an oil worker from Abilene, suffers a heart attack just as he's between healthcare plans. His story isn't unique: nearly 25 percent of all Texans are uninsured, Smith says, one of the highest proportions in the nation. Diagnosed with congestive heart failure, Beal racks up $125,000 in hospital bills. "If I coulda made it to age 65, I would have had some insurance," he says. "But I didn't make it."

To pay the bills, his wife Sandi goes back to work selling funeral plans door-to-door. A TV crew follows her and one of the program's most heartbreaking moments comes when she makes her pitch to one family, only to find that everyone already has a plot. For a moment, her face falls, though it's hard to imagine how selling a plot can possibly help her dig out of debt.

Cut to Tennessee. Smith profiles TennCare, Tennesee's innovative program that provides insurance to the state's working poor. He finds a kid with sickle cell anemia, a woman pulled back from death after a head-on collision with a truck, a heart patient who could never get private insurance, all of whom literally owe their lives to TennCare.

There's only one problem -- nobody wants to pay for it. TennCare lost $20 million last year, according to Smith, and the Legislature is "in an uproar" over how to save it. Participating hospitals complain about low reimbursement rates and are fleeing the program, even though many feel it is among the best in the country. "Money doesn't solve everything," a Tennessee legislator tells Smith, who seems taken aback by her fuzzy logic. Isn't money precisely the problem? Of course it is, but the state won't spend it. Thus TennCare seems destined to fail.

"Critical Condition" is a journalistic gem, so painstaking and intelligent that it seems churlish to criticize it. But it ends on an odd note, with Smith telling viewers that "the quality of your healthcare depends as much on you as your own doctor. That means you need to become informed. Ask the right questions. Be your own best advocate. Your life may hang in the balance."

Very true, but as "Critical Condition" shows, asking the right questions isn't going to help if you're uninsured and have a heart attack, or of you need a sigmoidoscopy and your health plan forgets to give you one.

Yet "Critical Condition" goes well beyond the piecemeal approach to healthcare reform that we've seen in this year's presidential campaign. With just weeks to go until the election, Gore and Bush are still haggling over prescription drug coverage for seniors. But making sure Aunt Vivian gets her Vioxx is not healthcare reform. Fixing Medicaid could be, but even that doesn't help folks like Jody Beal, who "aren't poor enough, sick enough or old enough" to get government help, as Smith puts it.

Much as I hate to quote George Bush the Elder, it does come down to the vision thing. Ironically, Al Gore had a front row seat the last time somebody had one about healthcare, and that was in 1994, when Clinton challenged Congress to pass legislation guaranteeing insurance to all Americans, regardless of income.

Now that is reinventing government. But what we got during last week's presidential debate was this: "I'd like to see, eventually, in this country, some form of universal healthcare," said Al Gore, responding to George Bush's offhanded putdown of Clinton's healthcare plan. "But I'm not for a government-run system. In fact, I'm for shrinking the size of government." And on Gore went with another rendition of how he'd shrink Washington.

Bush's vision is hardly better: As he's fond of saying, he's a man with a heart, a very big heart, a heart that he wears on his sleeve. But just try to pry the wallet out of his pants. If elected, Bush said during last week's debate, he would give families earning $30,000 a year a rebate of $2,000 to buy health insurance; although he called it "a huge down payment," the meager amount must have made hopelessly indebted and uninsurable people like Jody Beal want to reach for their unlicensed handguns.

To solve America's healthcare crisis, we'll need reinventions, and more than a few politicians are going to have to open their wallets. If you have any doubt about that -- and who could? -- "Critical Condition" is just the medicine you need.

Beatrice Motamedi is a former legal editor for WebMD and contributing editor for Hippocrates magazine.