Save your life: Sing in drag

How a high-powered Harvard-trained lawyer found health and happiness by donning fabulous dresses. 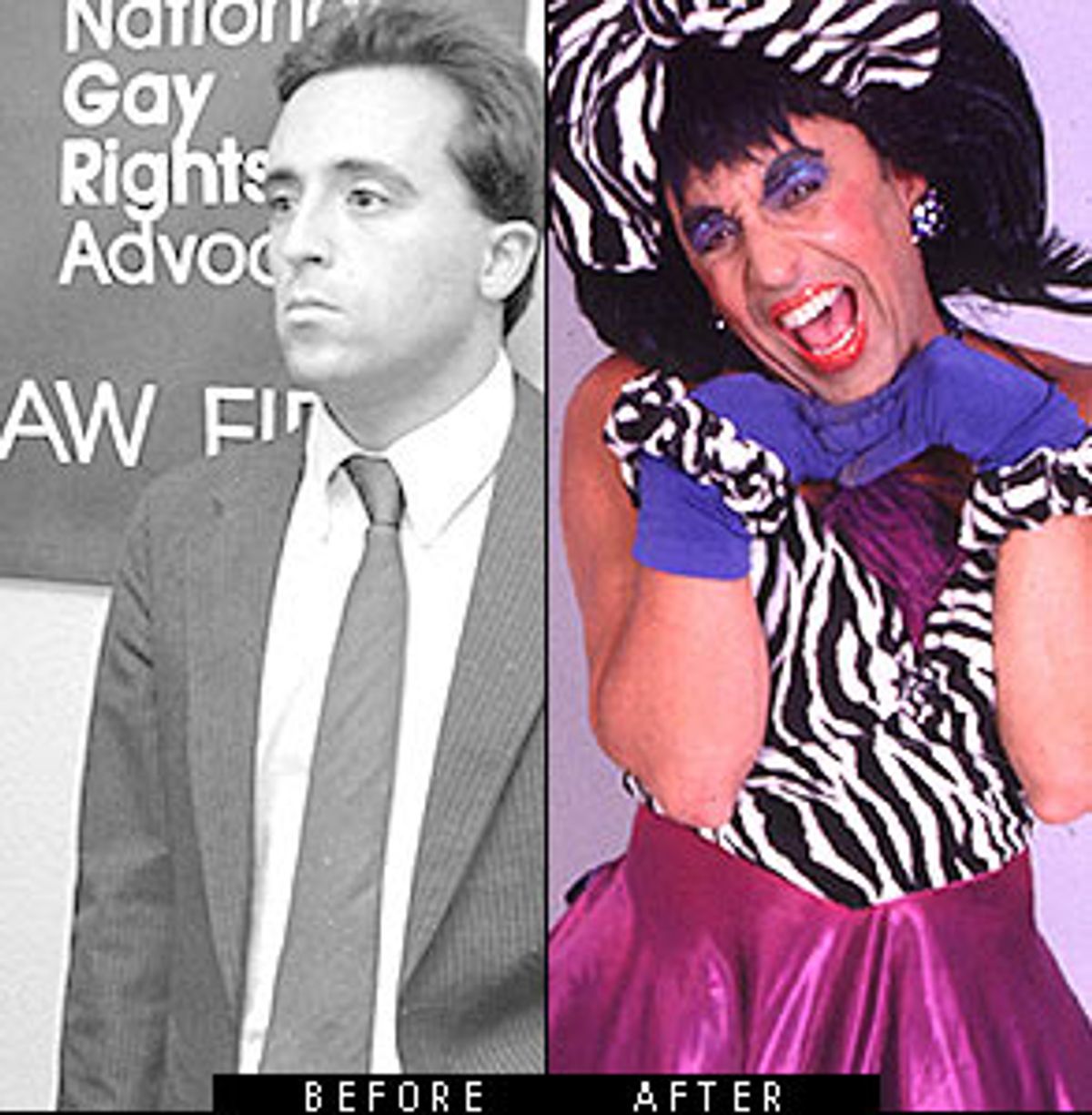 Like most Salon readers, for years I longed to become a full-time singing drag queen. Having recently left my respectable day job to pursue this promising and prestigious career, I must share the gospel: Becoming a fabulous singing drag queen can improve your health, rejuvenate your life and single-handedly double Revlon's market share.

All good boys have a bad girl twitching just beneath the surface. It was good boy Ben who got into Harvard and sang earnestly in respectable college musicals. And it was in college that Ben first noticed Rachel -- his foul-mouthed alter ego -- asserting her trashy existence (Ben's friends wanted to call her Miriam Ruth, but Rachel would have none of it). For 15 years she remained uncharacteristically subdued, bursting forth only on rare occasions. She did force Ben to wear a tasteful black gown at his last exam in law school, and occasionally surprised bleary-eyed friends at the airport. But Rachel had not yet discovered that bad girls can sing for their supper, and Ben had not yet found the nerve to make a career out of Rachel.

But I was no more depressed or unhealthy than the other stretched-thin nonprofit executive directors I knew. And I had worked damned hard to get where I was. My life was going to be meaningful no matter how miserable it made me. And Rachel would have to stay locked up on the sidelines.

If you had told me, when I entered law school in 1982, that I would eventually become either A) a member of America's favorite dragapella beautyshop quartet, the Kinsey Sicks or B) Jerry Falwell's love slave, I would surely have predicted B. My goal then was to become a public interest lawyer fighting for the greater gay and lesbian good. When I graduated three years later, I founded a national legal program devoted to combating AIDS-related discrimination, where I worked on issues ranging from employment and housing discrimination to immigration and child custody. I was a regular on the national TV-sound bite circuit, and became known as an expert on AIDS and insurance. (This is when I first discovered how little you actually have to know about something to be considered an "expert." Scary.)

But I felt frustrated and constrained trying to work within the plodding, tradition-bound legal system to address urgent, unprecedented issues. (Plus, I was on the wrong side of the kind of vicious infighting typical of idealistic and high-minded nonprofits. Does that makes me sound like a sore loser? Note to editor: Strike this parenthetical.)

So, in career No. 2, I became executive director of the Gay and Lesbian Medical Association, a national organization of queer doctors that addressed issues like the plight of HIV-infected health care workers, lesbian health and homophobia in organized medicine. I wrote position papers on AIDS and gay issues for Bill Clinton, boosted my profile in the talking-head food chain and survived the joys of executive director roundtables. (And you haven't lived until you've hung out with a bunch of executive directors. Typical exchange: "I feel so guilty because I worked only 96 hours last week, and I almost had time for a feeling." "Oh yes, last week I had to cut down to 110 hours so that I could more effectively personally bear the weight of the world's cumulative injustices.")

Yet underneath it all, Rachel was itching to emerge. (Actually, she's still itching, but she's seeing a doctor about that.) Damned if I -- self-proclaimed crusader for truth, justice and the un-American way -- wasn't becoming downright establishment. This had not been part of my plan. Gay folks were, I believed, sufficiently marginalized that I could spend centuries comfortably on the fringes of society fighting for acceptance without ever having to worry that I might personally experience it.

But here I was, masquerading in suits to meet with everyone who mattered. I was constantly on the road, constantly overcommitted and constantly pretending to be, well, respectable. Just like every other Harvard graduate ... except for the Unabomber, but that's another story, and besides, he looks like hell in a dress.

Well, I figured, as long as I was wearing uncomfortable drag and playing roles when I was caucusing with bigwigs, I might as well have some fun -- and wear a big wig myself. So for several years I passed during the day as Ben Schatz, earnest and well-spoken Important Gay Leader, while blossoming into Rachel, slutty chanteuse with the Kinsey Sicks at night. (Rachel, being shameless, would undoubtedly urge all readers to log on immediately to the Kinsey Sicks' fabulous Web site and to purchase our two deliciously subversive cds, "Dragapella" and "Boyz 2 Girlz." I, Ben, am far too restrained to do so. I will, however, mention that we are under contract to go Off-Broadway next year, but that in the meantime we can be hired for weddings, bar mitzvahs, parole hearings and emergency liposuctions. For those who need an explanation, Rachel wants you to know that the name Kinsey Sicks is a diabolically clever allusion to our perfect homosexual score on Alfred Kinsey's six-point scale of human sexuality.)

So how and why did I finally take the leap and make this most unlikely hobby an even more improbable career choice? And how has it utterly saved my sanity and my life? (OK, perhaps I'm exagerrating just a little, but Rachel loves high drama and this is, after all, a health column.)

Here's how it happened. On Dec. 30. 1993, some friends and I went to worship Bette Midler in concert. This being San Francisco, and this being Bette Midler, we just knew that the room would be filled with drag queens. Yet when we paraded in wearing our stunning Andrews Sisters military suits we were shocked to discover that we were the only drag queens within miles -- other than Bette. That bitch upstaged us, but we did receive some of the adulation and tumultuous applause that we so richly deserved.

Our drag characters -- Trixie, Winnie, Vaselina (later replaced by Trampolina ) and moi, Rachel -- evolved. It was a great psychological release -- and relief. I didn't realize it at the time, but Rachel's personality emerged in direct response to Ben's frustration as an executive director, always needing to bite his tongue in meetings. Rachel doesn't bite her tongue, ever. But she'll gladly bite yours.

Still, it took me years to find the lunacy to give up a secure and well-paid Meaningful Job to try to make a go of a singing drag queen career. For one thing, as a single gay man with a love life already on life support, I did not relish the thought of having to tell prospective dates I was a professional singing drag queen. (But who knew? Now that I have the time to go to the gym 17 days a week, lots of men seem willing to lower their standards and go out with me.)

So why did I make the final switch? Because the contrast between the joy Rachel gave and received as a performer and the stress Ben gave and received at work became too glaring to ignore. Ben wasn't sleeping, wasn't exercising and wasn't laughing. Rachel laughed a lot (although mostly at other people). Ben received positive job evaluations, but those didn't keep him warm at night. Rachel received applause, flowers and standing ovations, and was kept warm at night by the occasional deluded backstage groupie. (Note to prospective deluded groupie candidates: Positions are still available.)

And I found that I could communicate much more provocative ideas as Rachel -- and have people really hear them -- than was ever appropriate for earnest spokesmodel Ben to express. Ben, for example, struggled for a year to organize a national conference on HIV prevention issues among gay men and lesbians. Someone somewhere probably noticed, and the press covered the issue, sort of. But when the Kinsey Sicks transform "I Will Follow Him" into "I Will Swallow Him" ("For kneeling I always will be/And nothing can make me unsafe/Except booze or Ecstasy") or turn the Jackson 5's "ABC" into "AZT" ("I ran on down to Walgreens/To pick up all my pills/My viral load is tiny/Compared to all these bills"), millions of our fans who wouldn't have bothered to read those articles or to think about the issues involved do so now because they're laughing in the process. Or maybe they're just laughing and not thinking about the issues. But the important thing is: They've paid to see us.

And then, of course, there was all the family pressure. My parents had been deeply humiliated by my decision to become a lawyer. Eventually I gave in to their lifelong dream of having a son who was a singing drag queen.

Since I left my job, my income has plummeted. But so has my stress level. And my weight. Yes, I now vacation in San Jose instead of St. Tropez, but I sleep better than I have in years. I think I'm more patient. I am a kinder, gentler drag queen.

First, no one will take your dreams seriously unless you do. Second, spending money on things you really don't need helps trap you in the job you now have trying to pay for it all. (Do note, however, that some things, such as Kinsey Sicks cds, are absolute necessities. Which is why Ben presented one to President Clinton the evening before he was impeached. Note from Rachel to Bill -- you owe me $15.) Third and most important, never wear lipstick in shades that exist in nature, and always make sure that your hair is bigger than your house.

Ben Schatz is a San Francsico-based singer, song-writer and occasional essayist with a now-useless law degree. He is a proud member of The Kinsey Sicks, America's favorite dragapella beautyshop quartet. ___