A program for first-time johns lets offenders off the hook in exchange for their attendance at a daylong session taught by ex-hookers. 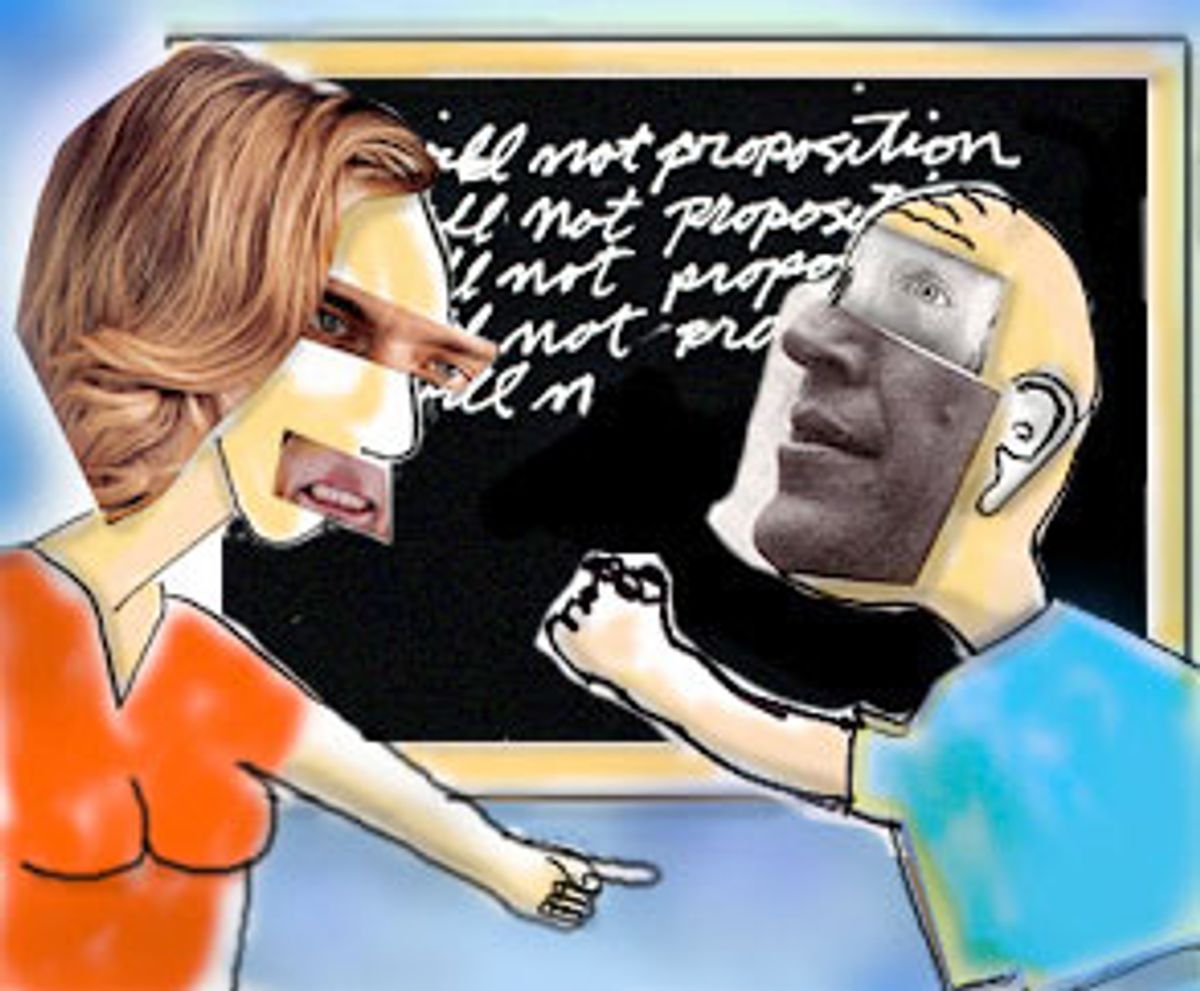 When she spoke as a prostitute, Norma Hotaling was like a ventriloquist's dummy or a pet parrot. "They pay you to say certain things," she recalls in a phone interview, launching into examples of prompt and response. "'Do you like that?' 'Oh yes, I like that'; 'Am I the best?' 'You're the best'; 'Did you come?' 'I came so good'; 'Are you my bitch?' 'I'm your bitch'; 'Do you love me?' 'I love you.'"

Hotaling left the streets in 1989, and now she tells her story to rooms full of johns. To one such group, she described her old self as "homicidal and suicidal. I was waiting for one of you to take me out somewhere and act a little crazy or ask me to do something I didn't want to do or push my head a little bit harder down on your dick, and I was going to kill your ass. And I had a plan and I had weapons and I had a deep desire to do that, because I was so full of rage."

Her captive audience was attending "john school," the most celebrated branch of a diversion program Hotaling developed with the San Francisco Police Department and the district attorney. Under the First Offenders of Prostitution Program (FOPP), charges against first-time johns are dropped if they pay a $500 fee and attend a daylong educational session. During the seven-hour class, health department officials, police officers, the D.A.'s staff and former prostitutes detail the ways prostitution reverberates beyond the trick.

Most of the fee money goes to FOPP's parent organization, Standing Against Global Exploitation, which Hotaling founded to help women leave -- and recover from -- prostitution. Thus the johns fund job training, therapy and other services for former prostitutes, in effect paying for the damage they've done, Hotaling says. "It's a restorative justice program."

Eleven years ago, Hotaling was a homeless streetwalker who'd been addicted to heroin for 21 years. Then she turned herself in at the nearest precinct, insisting she be put in jail. She stayed there for six weeks and almost died during drug withdrawal. When she got out, she started doing AIDS outreach work, motivated to stay straight and useful by "rage at the system and love for my sisters."

"People talk about prostitution, for some reason, like survival of the fittest," she says. About "the girls with sexual abuse, the girls that are on the street, the girls who are drug addicted, society says, 'Oh well, they got eaten up; they weren't the strongest of our herd.' This is a group of women nobody cares about." In 1993, Hotaling founded SAGE, which now has 22 full-time staffers and 30 therapists who donate their services. Of the full-timers, 18 are former prostitutes.

New York filmmaker Bill Shebar is making a short documentary about SAGE, and he showed me his footage of Hotaling and two other former prostitutes speaking to rows of men at john school. "Sue" says calmly from the podium, "I have duct-taped and pistol-whipped and robbed people and left 'em to die -- because you get to a point where you get tired of being abused and you want to be the abuser."

"Dawn" says she started working the streets at age 13, and robbed her customers because her pimp beat her if she didn't. She starts her talk with attitude, but then breaks down as she urges the johns to quit and regain their self-respect, as she did. Wiping her face furiously, she sobs, "Now I don't want your money. You couldn't give me your money. And I don't care how much you have because today I am off drugs and I love myself today. You got to learn to love yourself." She mumbles "Thank you" as she rushes off the podium with her face in her hands.

Hotaling scans the room of johns slowly as she says, "I was exploited as a child in prostitution at ages 5, 6 and 7." Now in her late 40s, she looks like a suburban mom with her short, frosted hair and long, loose-fitting top. "I don't know when I got hepatitis C -- I know it almost killed me last year. I don't know when I got hepatitis B. I do know if you said, 'Let's not use a condom,' I'd say, 'Sure, who cares?' I did not care about you and I did not care about me."

It was the disregard for condoms among sex workers that initially inspired the police to work with Hotaling on FOPP. Soon after she'd started SAGE, Hotaling read in the paper about a San Francisco police lieutenant who was arresting johns. "I thought, That's great," Hotaling says, and she decided to call him up "because the law is written in a nondiscriminatory manner -- anyone soliciting for prostitution shall be arrested -- but it's always applied predominantly against women and girls, not against the customers."

Then she learned that the lieutenant was Joe Dutto, who'd arrested her more than 30 times in the 1980s. "He was scary, this big guy you didn't want to cross." She called him anyway, in early 1995, and Dutto told her he was disturbed by what he'd been hearing on the arrest tapes of undercover cops busting johns and hookers. Many of the johns offered to pay more for unprotected sex, and many of the women agreed. (Hotaling confirms that 30 to 50 percent of the men in FOPP don't want to use condoms.) Dutto told her he was worried about the spread of HIV and other STDs. Hotaling said, "I'm a health educator. I'll put together the program," which she did, in two months.

According to the district attorney, FOPP boasts a recidivism rate of less than 2 percent. More than 3,300 men have attended john school in San Francisco, and only 57 have been rearrested anywhere in California. I ask Hotaling if the original idea of having prostitutes tell their stories was to scare the johns straight.

"In the beginning," she replies, "I only wanted the women to have a venue to speak. I thought it would be powerful for them to confront another layer of their history, to actually confront men and tell them the truth finally about prostitution. So I went in there thinking it would be a success if the women didn't get tomatoes thrown at them and ended up feeling empowered."

She didn't think much about the men's response, partly because the women are her priority but also because she "did not believe that men would even consider giving up their right to buy women ... This was a privilege and a right that men have because they're men. 'You're superior, so you get this.' And we were asking them to look at it, but I didn't think they'd give it up."

Yet Hotaling also knew from her own experience that the privilege didn't make them all that happy. She says of her eight years in the business, "The men were coming to me because they were lonely and had no relationships of any depth. And they were pretending this was a relationship and pretending that it worked for them. But I knew they were as sad as I was when it was over."

"Steven" is a handsome, soft-spoken man in his 40s who estimates he bought sex 1,000 times before he was caught and sent to john school. He agreed to be in Shebar's film but asked me to give him a pseudonym. In the film, Steven describes visiting prostitutes as an addiction: Though he had a girlfriend, he spent more and more time cruising the streets. Three months after his arrest and into his "recovery," he says, "the ironic thing is that the very thing you thirst for -- which is human contact -- the real sources for it, from your real life, fade over time. It became harder and harder to have a genuine relationship with a girlfriend [the more I had] these artificial relationships."

John school opened his eyes to his artificial better halves. "Never once, in 1,000 times, did a single girl talk about her pimp. Sometimes you would know that they'd want to go score drugs, but for the most part you're getting the Disneyland version -- you know, the dolled-up lady." In john school, he found out that the women's lives shared with his "a history of abuse, abandonment, great pain and essentially a very low self-worth." Hotaling says a lot of johns come from such backgrounds.

Hotaling's compassion for both parties doesn't soften her stance against prostitution itself. Some prostitute advocates criticize SAGE for opposing legalization of prostitution and cooperating with the police. But though Hotaling admits there may be cases where a particular sex-for-money exchange is victimless, she insists that "people buying people in order not to face real life" takes its toll on society.

When prostitutes protest that their johns are nice guys, she says she asks them, "'Can you be the real person that you are, when he walks in the door, if you're having PMS or angry at someone? No, they don't want you that way.' That's the limitation that prostitution offers these guys, and they start seeing women as these limited human beings. So when women get angry, they're like, 'Fuck you, I'll go buy Sally, she's never angry.' Or 'She's not hurt, she doesn't have sexual abuse, she doesn't have sexual harassment at work.'

"And that's a real problem," continues Hotaling. "The men who run the economic system that women work in, the political system, the men who make laws -- if they're johns, they don't see women as whole people. A great case in point is Dick Morris. I read where he was pushing President Clinton to sign the welfare reform bill. The rest of Clinton's staff split with him and said, 'This is really going to hurt women and girls.' And right after that, it came out that Morris was a customer of prostitutes."