Palestinian mothers talk about the pride and anguish they feel as their sons fight and die. 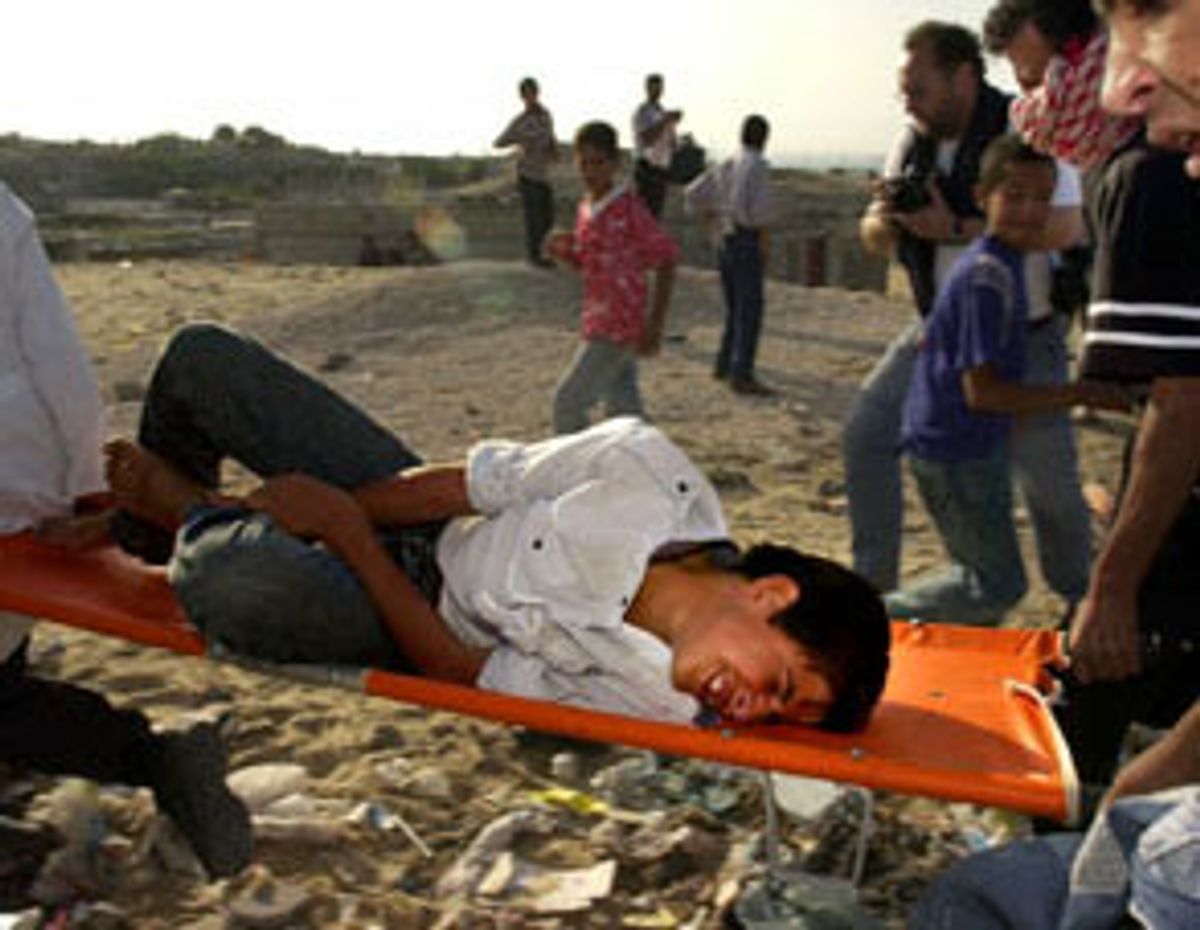 Najah il-Khatib, in a traditional Palestinian dress covered with golden embroidery, stands by the hospital bed of her wounded son, Zahran, 15. Her face, framed by the white lace of an Islamic veil, exudes calm and pride. Zahran, who winces with pain as his mother speaks, did the right thing, according to Khatib, when he ran out of the house at lunchtime, threw stones at Israeli soldiers and got shot in the chest.

"I am honored that my son got shot in a demonstration," says Khatib, caressing Zahran's curly brown hair.

Doctors say Zahran's life was spared only because the high-velocity bullet fired by an Israeli soldier hit a rock before penetrating his chest and abdomen. Zahran's aunt, a stern figure sitting on the other side of the bed, seems to regret this stroke of luck, having hoped that the boy might become a martyr.

"Three days before the demonstration, Zahran was asking to die for [Palestinian] liberation," she points out. "We can't live like this any longer. Either we set ourselves free or we die trying."

In the violent clashes that have pitted Palestinian stone-throwers and scattered gunmen against well-armed Israeli soldiers and settlers for the past two and a half weeks, more than 100 people -- most of them Palestinian -- have been killed. Of those killed, 30 were children. According to UNICEF, children also make up a third of the more than 3,500 people wounded so far.

Are Palestinian children dying because their mothers are prepared to put their children's lives on the line? "They are our children but they're also Palestinian," says Khatib, 42, the wife of a construction worker and the mother of 10. "They're here for this particular reason, to defend the land.

"God gives them, God takes them," she adds with a bittersweet smile.

From the Israeli point of view, Khatib's seemingly detached attitude is typical of all Palestinian mothers -- and is shocking in its apparent coldness. Stories circulate here about Palestinian families literally selling their children to the cause: Rumors say Palestinian parents receive hundreds of dollars from Palestinian leader Yasser Arafat to send their sons into the street to throw stones -- and thousands of dollars if they die. The stories are not based on any evidence, but the pernicious, racist message is there: Palestinians love their children less, therefore they are less human than Israelis.

By contrast, the Israelis see themselves as much more sensitive to the deaths of their children. In particular, Jewish mothers loom large in the collective imagination as tenderhearted women whose grief is a centerpiece in the national drama of soldiers' funerals. When the Israeli army finally pulled out of southern Lebanon in May, the retreat was described in the media as a victory of Israeli mothers who had become less and less tolerant of the loss of their sons' lives.

When the world's televisions showed images of Mohammed al-Dirrah, a 12-year-old Palestinian from Gaza caught in a heavy exchange of gunfire and shot to death by Israeli soldiers under his father's helpless eyes, international public opinion registered a surge of sympathy for the Palestinians.

In Israel, however, the blame was placed squarely on Mohammed's parents. "The father should have lain down on his boy to protect him," criticized a left-wing Israeli acquaintance, before concluding: "Arabs do not attach the same importance to human life [as Westerners do]."

The Israeli media reported that Mohammed and his father, Jamal, were at the dangerous Netzarim Junction in Gaza specifically to throw stones at Israeli soldiers when the army outpost was being attacked by Palestinian snipers. Palestinian media said that the two were caught in the crossfire after running an errand. The TV footage, which shows the father waving his hands and shouting "There's a child! Don't shoot!" while trying to protect his son with his arm and back, would suggest that Jamal was extremely worried about Mohammed, but ultimately unable to save his life.

In a public statement, the Israel Defense Forces expressed sorrow at the child's death but emphasized that "the Palestinians make cynical use of children's lives by sending them to throw stones under the cover of Palestinian fire that endangers their lives."

Yet, in talking to the Palestinian mothers whose sons risk death in the streets as the grim conflict grinds on, a different picture emerges: not of coldness, but of love -- mixed with belligerent despair.

Khatib is a good example of those mixed feelings. When her son Zahran ran out to join the riots in Hizma, a small village outside Jerusalem, Khatib's first instinct was to run after him. "I tried to catch him because I knew something would happen, but I was too late. Next thing I heard, he was wounded," she says.

At the same time, she says, "I have no problem with him going out to demonstrate. If I could, I would go too."

Women have played a relatively small part in the current round of violence, in contrast with the days of the first intifada, the Palestinian uprising that rocked the West Bank and Gaza between 1987 and 1993. Women then were a staple of mass demonstrations against Israeli occupation. A woman and an 18-month-old girl are the only female casualties so far in the current conflict. Here and there, young Palestinian women run with buckets of stones to help the boys on the "front line" or distribute masks and onions to try to fight off the effects of tear gas. But by and large, the riots have been an all-male affair.

The reasons are mainly cultural: First, because lethal weapons are being used on both sides, the riots are considered unsafe for women. Secondly, unlike in the past intifada, in which protests spread from street to street involving anyone who happened to walk by, the areas of confrontation between Israeli soldiers and Palestinian civilians have been more limited this time. Indeed in the past seven years, Israeli troops have withdrawn from the heart of most Palestinian cities. Israeli soldiers are posted on the outskirts of town where "proper" women have no business going in times of war. The resurgence of Islam, which frowns on mixed male and female gatherings, also is a factor. Khatib, an observant Muslim, says she would never allow her daughters to go out and riot "because they are girls."

Women, however, are "the unknown soldiers, the ones holding the fort in every Palestinian household," wrote Muna Muhaisen, a Palestinian-American journalist, who has been keeping a war diary since the violence erupted two weeks ago. "They're the ones calming their kids and tending to them while keeping their eyes glued on their TV screens. I don't know a single woman in Dheisheh [a Palestinian refugee camp in the West Bank] who isn't closely following every single development. Even my 77-year-old mother-in-law sits in her room with the radio close to her ear."

A gynecologist who sees many Palestinian women in clinics around the West Bank says her patients are under huge stress these days: "Having a child is not easy, so losing one is awful," says Dr. Ghada Shomali.

Shomali hasn't seen Amir, her 19-year-old son, in days, because a tight Israeli military siege is barring the short road between Jerusalem, where Amir studies, and Bethlehem, where the family lives. "I can't tell him not to participate in the demonstrations," she says. "One, because he wouldn't listen. Two, because it's his right to protest. This isn't a life we have. You can't just sit there and say 'I want life to be better and the occupation to end.' It will never end that way. All I ask is for Amir to call once a day to tell me he's alive."

Many women are torn between their nationalism and their motherly instincts. Khatib wished Zahran safe at home the day he was shot, but also believed he was old enough to fight. "When Israeli soldiers attack the village, they don't make any distinctions between 15-year-olds and 25-year-olds," she says. "They will shoot to kill no matter what the boy's age is. We have to protect our village no matter what the price is. If we want to complain, we complain to God. This is our destiny."

Yet, one floor below Khatib in the same Jerusalem hospital, a mother sitting with her 13-year-old boy in an intensive care unit feels differently. Her son Mohammed, who is hooked to a respirator, has been paralyzed on his right side since a rubber-coated metal bullet fired by Israeli police penetrated his skull.

Mariam Jodah, 34, still can't believe her son escaped her watchful gaze, slipped out of the house on Oct. 6 and joined the Friday prayers at al-Aksa mosque in Jerusalem. The day had been declared a "day of rage" by Muslim clerics and radical Islamic groups. Violence was foretold and she had strictly forbidden her son from taking part in it.

Mohammed, who looks much younger than his age, went to the mosque with an older cousin, probably out of curiosity. "It's a fun trip to go down to al-Aksa mosque and see things along the way," Jodah explains. A Norwegian news correspondent who was at the mosque at the time Mohammed was wounded said the police first shot in the air to disperse rioters, but Mohammed, who could not run fast enough, trailed behind and was shot in the head.

"I want to ask what harm a kid Mohammed's age can cause a well-armed soldier? Their aim is to kill young children. It's not the children's destiny. It's the way soldiers act in demonstrations. Sometimes I think God chose him," says Jodah, her small face knit with sorrow under a Muslim veil. "But I don't think it was Mohammed's destiny to end up like this."

"I think Israel offered him to God. [His mother] didn't offer him herself," suggests Raeda, a nurse at the unusually busy hospital.

Dozens of human rights groups, as well as the United Nations, have condemned Israel for excessive use of force in dealing with the riots. One of the key issues at the regional summit hosted in Egypt and mediated by the United States on Monday is the Palestinian demand for an international investigative commission that would look into the methods used by Israeli forces to put down civilian protests. Israeli Prime Minister Ehud Barak, however, is opposed.

Israel blames incendiary broadcasts on Palestinian television and radio, which call day and night for people to give their blood to fight the Israeli occupation or simply "kill Jews," for the feverish violence on the streets. Israelis also accuse the Palestinians of using child warriors to win support in the international media by forcing Israel to pour innocent blood. One Israeli journalist quoted Israel's late Prime Minister Golda Meir as saying in 1972: "We can forgive the Arabs for killing our children. We cannot forgive them for forcing us to kill their children."

Certainly Jodah did not force Israeli troops to paralyze her son. And even Khatib, in her own way, would rather her son, now in 10th grade, lead a healthy, happy life. Neither woman says she feels she has had the freedom to shelter her children. Still they maintain completely different points of view about whether their sons should have been on the street. Their philosophical differences refute the generalizations applied to Palestinian mothers, who, like everyone in the conflict, are individuals with distinct feelings.

"The question should be: 'What's the alternative?' When you're struggling for liberation, you fight with what you have -- and we have nothing else but ourselves," argues Muhaisen. "If it weren't the sons going in the streets, it would be the daughters; if not the daughters, then the mothers."