Can I feel complete in a relationship with a man and still be a feminist? 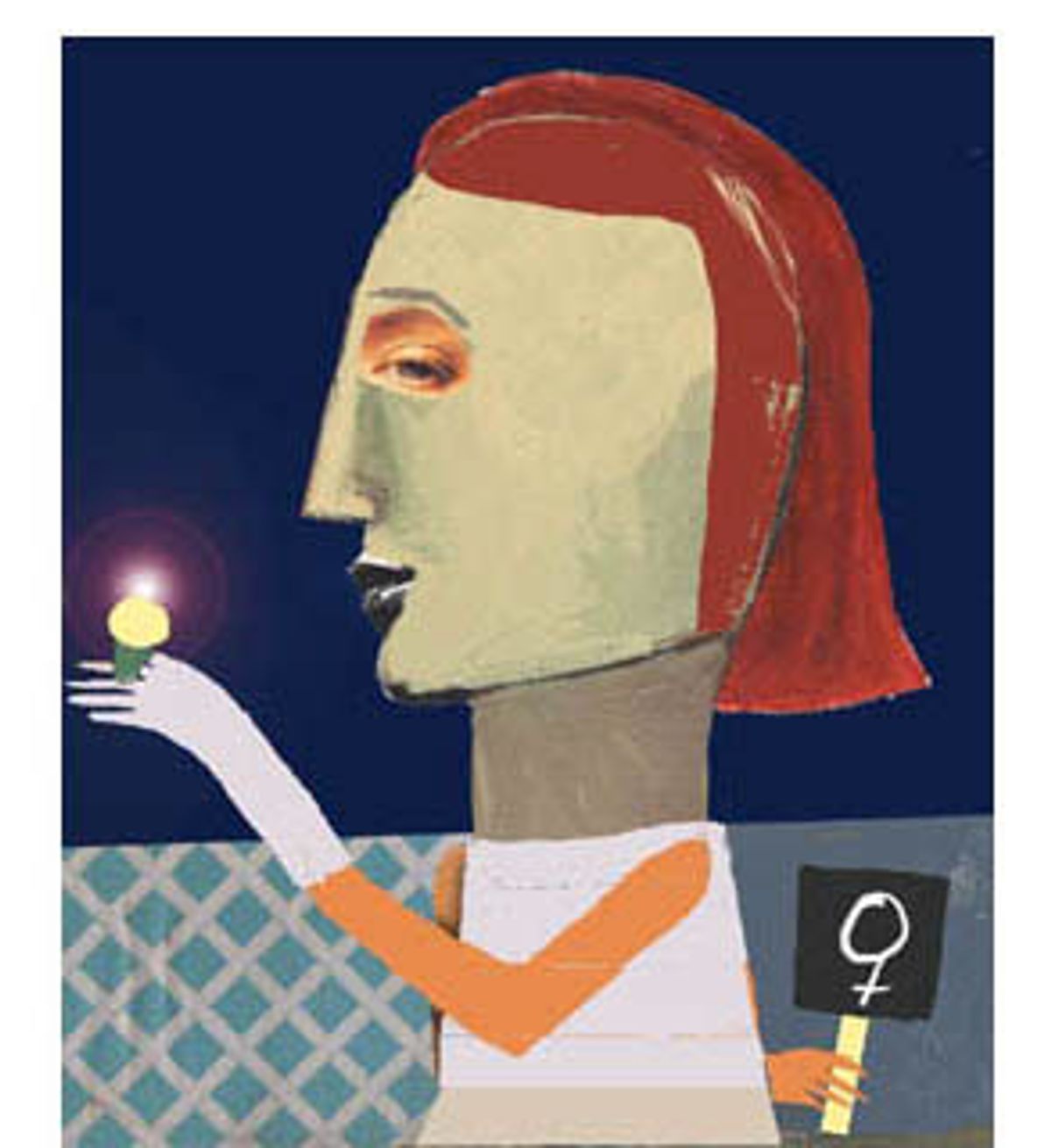 Perhaps if I'd had a Barbie and her hunky boyfriend, Ken, when I was a girl, it'd be easier for me to live my life with a man now.

Instead, when I was a child, my divorced, feminist, single working mom raised me on the good 1970s liberal themes: justice and equality. When I begged for a Barbie -- career Barbie, even -- my mother cut me off with "I don't care if they make her a rocket scientist, you're not getting a Barbie."

The catchphrases my mother sprinkled over my childhood and adolescence were the standard feminist fare of the times: "Men should do half the housework and child care." "You will get your college education and have a career -- not as a means to self-fulfillment but because you will not be economically dependent on any man." "You girls don't know how lucky you are to have access to birth control, but if you do get pregnant we're taking you to Planned Parenthood for an abortion." And, of course, there was always the feminist adage: "A woman without a man is like a fish without a bicycle."

My mother's strongly feminist perspective provided a tremendously rich basis for my own sense of self and self-worth, but it caused confusion as well. Somehow I came away with the idea that romantic relationships with men were on some level a battle, an ongoing power struggle. So when Gloria Steinem got married recently, it eased my own considerable discomfort as I sit considering the prospect of my own marriage.

I am an unapologetic, card-carrying feminist with all the right credentials. I am not one of those women who say, "Well, I believe in equality, but don't call me a feminist." I worked at a rape crisis center for several years, co-founded a national nonprofit organization that serves primarily female victims of rape and sexual abuse, have mentored a dozen young women professionally and have worked on abortion rights and in the field of international women's human rights. I've never had a relationship with anyone who wasn't a feminist, who wasn't conscious of the complex nature of gender dynamics. But now that I am building a relationship with the man with whom I plan to spend the rest of my life, my own notions of feminism, masculinity, femininity, power and freedom are all being called into question.

I come to this relationship with Andy happy with who I am: a strong, confident, educated woman. Yet there is no question that being with Andy somehow enhances my existence. It is within the context of this loving relationship that I feel complete. In this partnership I am able to successfully do the dance of simultaneous vulnerability and security.

But it confuses me as well. How much power is too much for one person to have in a relationship? What does it mean that Andy takes care of the finances and the garbage and I take care of the laundry and the social engagements? What does it mean that Andy likes to choose my outfits when we go to parties -- and that I like it? The child in me who was raised on the monthly Stories for Free Children that appeared in Ms. magazine feels bad, ashamed, whorelike for participating in such an activity. The adult who is comfortable with her own sense of self and her own sexuality likes it -- finds it to be a turn-on.

But then I question even that: What does it mean that this slight bit of subservience inherent in dressing to please a man turns me on? I was raised to believe that such an act was always wrong. This doesn't make sense in the paradigm of my daily life -- no lover of mine, male or female, has ever worked so hard and so honestly to forge an equal partnership with me as Andy does. Andy makes the coffee in the mornings and serves it to me, changes the toilet paper in the bathroom and does all the cooking. So why do I feel like I've sold a part of my soul when I comply with his wishes to get on my hands and knees in bed?

I think about moving across the country to support Andy's work and I wonder if I'm somehow failing the sisterhood. Andy leaves a coffee mug in the bathroom and I start to rant about how I'm not going to clean up after him, which would be hilarious if it wasn't so sad; I do far less than my 50 percent of the housework. In bed we establish that he is the man and I am the woman in very traditional ways and then in "real" life we are equals. Is this wrong? It's what is hot for both of us -- is that so bad?

I find myself torn, too, by the paradoxes of Andy. Here is a man who was raised by his mother, whose imprints of women were shaped largely by three sisters who are bright, accomplished, take-no-shit women -- and one of them is even a lesbian, as I like to playfully tout at parties when extolling Andy's feminist credentials.

Here is a man who is delighted with my professional success despite the fact that his career has been slow to emerge, who brags to his friends about my athletic accomplishments, who isn't disturbed by the fact that I am the same size as he is and that I earn twice his salary. Yet he's a man who explained to me that he wrote his dissertation on cowboys and Indians because "I was looking for manly heroes." He explains his series of relationships with women 10 years his junior by telling me, "What can I say, women that young look really good when they're naked." He's a man who tells me that while he doesn't approve of such behavior, he didn't challenge a male friend who betrayed his girlfriend with another woman because "it would cost me my dude card, baby." He has friends who have visited sex workers in third world countries and he has never voiced his disapproval.

I'm not sure about any of it. I struggle. What's OK? What's offensive? Where does the line between the personal and the political get crossed in this, or in any, relationship? Can a woman's personal decisions ever not be political? I wasn't raised to believe so. I long for a forum to discuss these issues and one doesn't exist. Questions weigh on my mind that I can't ask my mother: Am I still a feminist if I beg him to fuck me? I am at least as guilty as any man of perpetuating the myths of traditional male and female roles.

The other day, explaining to Andy why I didn't find a somewhat effeminate male friend of ours attractive, I said, "Men should be men." During a recent round of scary noises in the night, when Andy asked me why he had to be the one to go investigate, I said, "Because you have the penis." I know that these thoughts trap both men and women, but I am guilty of them still.

It comforts me to see the paradoxes inherent in contemporary gender roles playing out in the lives of some prominent women I know. My experiences with former United Nations ambassador Jeanne Kirkpatrick come readily to mind. People don't come any tougher or with finer intellectual, academic or professional credentials than Kirkpatrick does. Yet a few years into her tenure as a Cabinet-level official, her husband complained to the New York Post: "Our maid doesn't really pay much attention to me. The food's not good enough. The house is not clean enough ... I miss my wife." One night when I was having dinner with her son, Kirkpatrick called and asked him to rush right over -- the basement was flooding and she didn't know what to do. I was delighted on another occasion when I visited her bedroom and saw that this firebrand of international affairs slept in a pink palace, complete with frilly bedspread.

I'm sad that I need such comfort. It's a shame that I need validation for the choices that I make. Isn't the whole point of feminism the idea that women, as well as men, should have the power and freedom to choose whatever roles they want for themselves? Why, then, do some choices feel more valid than others within the equality framework? Why, then, was Steinem's marriage so freeing for me and many women I know? We sighed with relief, thinking, "She did it; now our relationships with men are OK." Her marriage did a lot to ease our guilt, perhaps, but not our confusion.

Ultimately, I believe that the respect, compassion and love between Andy and me allow for a relationship that is truly equal, that genuinely supports choice. I believe, at least intellectually, that I am allowed to be submissive in bed, to wear the short skirt I know Andy likes, to take his shirts to the dry cleaner, and that I can do all of these things without being compromised. Intellectually I know that it's OK to enjoy the powerful mythos and ritual that surround seemingly ordinary acts like letting Andy open a door for me.

But reconciling what I believe to be the right choices for myself and the emotion and politics imbued in those choices is no small task -- and the struggle to harmonize all the conflicting notions within me, and within Andy, continues. Somewhere I know they all coexist -- strength and vulnerability, feminism and sexual freedom, equality and masculinity, femininity and power. Maybe on some level Kirkpatrick understands this. Steinem must, or she never would have decided to marry.

I don't want to be Barbie. I don't want to marry Ken. My own notions of femininity and masculinity reach far beyond the narrow archetypes represented by these dolls. I'm hoping that Andy and I are able to carve out a relationship in which we can define these terms together -- in which we can bring ourselves to life.

Nancy Kruse is a writer in Washington, D.C.