The two candidates share a podium -- but the vice president knocks Bush off center stage. 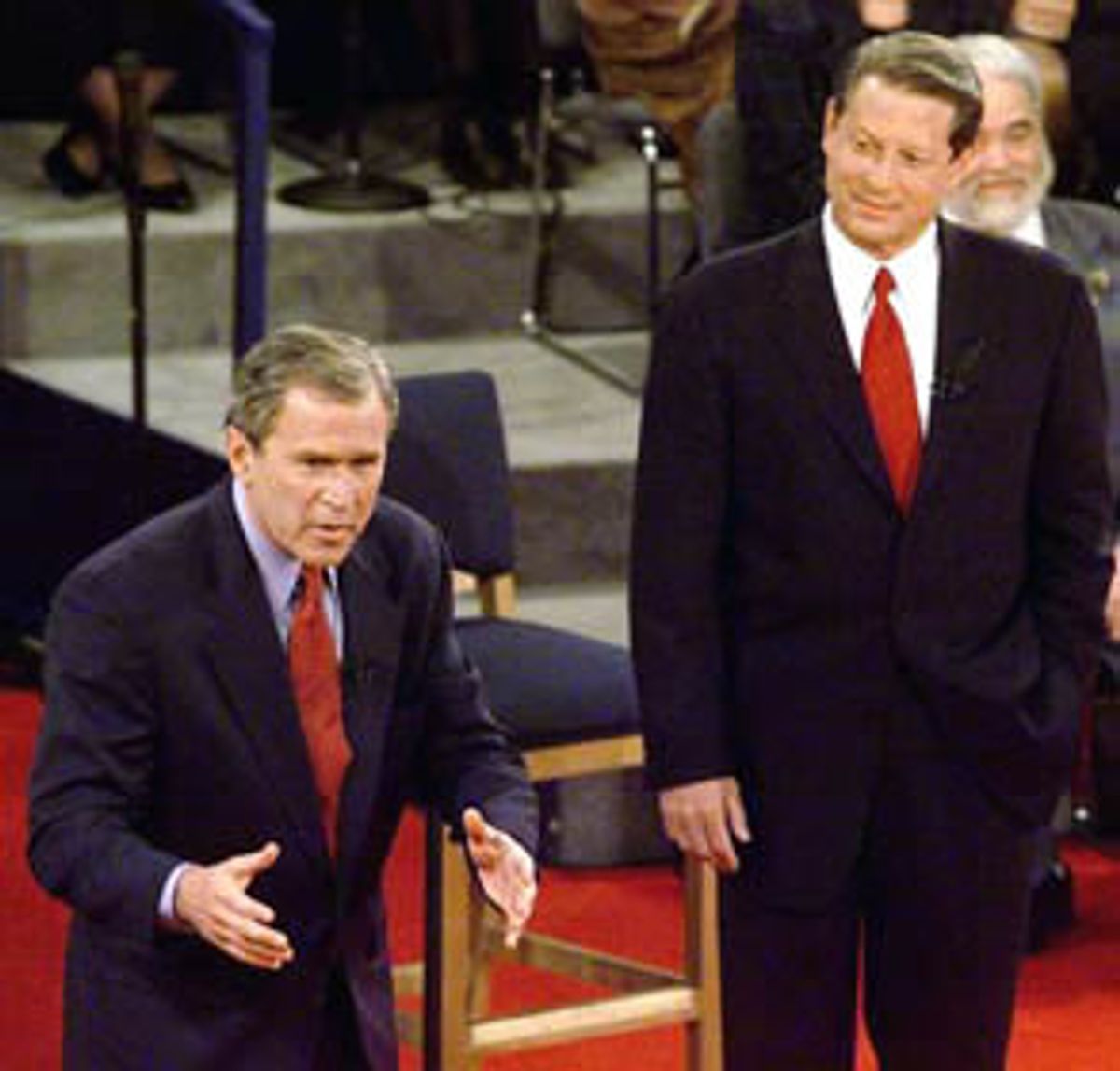 If you happen to see Gov. George W. Bush over the next few days, and it looks as though he has some dust or wax in his hair and on his face, have pity on him. Vice President Al Gore wiped the floor with him Tuesday night during the third and last presidential debate.

It was tough to feel bad for Gore after his schizophrenic performances in the first two debates -- hyper-aggressive, then overcompensatingly passive -- that added up to a one-two swing-and-a-miss. Gore's had a quarter-century career of nastiness, so for him to be slammed for being too obnoxious in the first debate, and then double-slammed for being falsely wimpy in the second, seemed like poetic justice.

But it was the Texas governor whose karma caught up with him this night. A lifetime -- surely a campaign season -- of coasting, not enough of that fancy book-learnin', came back and took a Texas-size chomp from his Lone Star ass. The Chevy Chase of American politics phoned in a real dud of a performance Tuesday night, trying to slide by on charm and little else.

Sure, Gore was overeager and sometimes smug. He's Gore. But from the very first question about "HMOs and insurance companies making the critical decisions that affect people's lives," the 100-plus Missouri residents asking the pre-screened questions sought specifics Gore was ready to give them. Conversely, Bush smirked and chortled, and while that probably went over super swell at the DKE house, it allowed Gore to pick him apart in the back-and-forth the format permitted.

Now, it's entirely possible that Bush's flat-lined performance was on purpose. Gore was extremely forceful -- even seeming to invade Bush's space once, approaching him while asking for an answer -- and there's no telling how that will play. But in general, Gore killed Bush on the issues. His seemed to be a 90-minute performance-art piece dedicated to the virtues of substance over style. Of course, me being completely wrong wouldn't be entirely unprecedented, and focus groups immediately after the debate indicated anything from mixed reviews to a Bush win.

As one Texas political reporter who called the night a draw said to me, "Bush gave the TV networks enough to pick apart for the next two days. The question is whether they'll do it."

If they don't, it won't be for lack of material. Time and time again, Gore ripped away at Bush's veneer, telling the audience that beneath it all lay a candidate who opposes them on the issues.

After the first question, Gore expressed his support for the bipartisan House version of the patients bill of rights, offered by Reps. Charlie Norwood, R-Ga., and John Dingell, D-Mich. "It is actually a disagreement between us," Gore said for the first of what would be many times. Norwood-Dingell, he pointed out, "I support and the governor does not."

Bush leapt to one of the most compelling arguments for his election -- that he has worked in Texas in a bipartisan fashion. "I brought Republicans and Democrats together to do just that in the state of Texas to get a patients bill of rights through," Bush said. "It requires a different kind of leadership style to do it, though. You see, in order to get something done on behalf of the people, you have to put partisanship aside. And that's what we did in my state."

Problem is, when people talk about a "patients bill of rights," they mean - as the questioner directly asked -- "Why aren't the HMO's and insurance companies held accountable for their decisions?" Allowing patients to sue their HMOs or insurance companies is the pivotal difference between Norwood-Dingell and the watered-down GOP leadership "patients bill of rights" bills that Bush supports.

In Texas, Bush fought against the right to sue harder than he fought against almost anything else. One of his first actions just after being elected governor, during the 1995 legislative session, was to veto a patients bill of rights offered by a conservative Republican. To his credit, he then instructed his insurance commissioner to enact by law several of the less-controversial provisions of the bill. But when the right to sue came up again in 1997, with the threat of a veto-proof majority, Bush let it pass without his signature.

"I referred to the Dingell-Norwood bill," Gore said. "It's the bipartisan bill now pending in the Congress. The HMOs and insurance companies support the other bill that's pending, the one the Republican majority has put forward. They like it because it doesn't accomplish what I think needs to be accomplished ... It has strong bipartisan support. It's being blocked by the Republican leadership in the Congress. I want to know whether Gov. Bush will support the Dingell-Norwood bill which is the main one pending."

Bush again dodged it. "The difference is I can get it done," Bush said. Gore stepped toward him. Bush nodded his head, surprised Gore was there. "That I can get something positive done on behalf of the people," Bush said. "That's what the question in this campaign is about."

Finally, moderator Jim Lehrer stepped in. "What about the Dingell-Norwood bill?" he asked the governor.

Bush didn't answer the question. Again. And he misrepresented his record, saying, "People take their HMO insurance company to court; that's what I've done in Texas and that's the kind of leadership style I'll bring to Washington" while somehow failing to mention that he fought that provision tooth and nail.

I went on TV after the debate -- post-midnight; if you missed it I won't be offended. The woman who did my makeup likes Bush. She sees it in his eyes. He's sincere. He means it. Gore looks away, she says. Maybe that's true. But it's easy to be sincere when you're not really talking about anything.

Asked about prescription drugs for seniors, Bush said he supported some uncontroversial plans and then gave a whole lot of bipartisan platitudes.

"Now look," Gore said when Bush was done, "if you want someone who will spend a lot of words describing a whole convoluted process and then end up supporting legislation that is supported by the big drug companies, this is your man," he said, pointing to Bush. "If you want someone who will fight for you and who will fight for the middle-class families and working men and women who are sick and tired of having their parents and grandparents pay higher prices for prescription drugs than anybody else, then I want to fight for you."

Bam! Bam! Bam! Gore, with his typically hammer-fisted touch, drove his points home. "Governor Bush is for vouchers," he said. On Hollywood's marketing "garbage" to children, Gore swore to "do something about this" and Bush failed to even bring up Gore's multimillion-dollar Tinseltown fundraisers. Gore claimed that under his watch, government got smaller, shrinking by hundreds of thousands of jobs, conveniently neglecting to mention that most of those jobs came from the Department of Defense, while Texas' government under Bush got larger. Bush put up nary a defense, not unlike the rhetorically emasculated Gore of the second debate.

Bush on his tax cut largely benefiting the wealthiest 1 percent of Americans: "Of course it does," Bush finally said. He went on to explain how, since they pay the most now, they would naturally reap the biggest benefit from a tax cut.

A member of the audience -- the purple-shirted Leo Anderson -- asked Bush a question that many of us in the Fourth Estate haven't had either the opportunity or the guts to ask him about: that creepy smile that falls upon his lips whenever he discusses the death penalty. "You seem overly joyed and proud that Texas leads the execution of prisoners," the questioner asked. "Did I misread your response and are you proud that Texas is No. 1 in executions?"

"No, I'm not proud of that," Bush said. "The death penalty is a very serious business, Leo."

Another Texas record -- the state's abysmal rate of health insurance, No. 50 out of 50, according to Census figures -- came up, and Bush defended Texas as having a "safety net," meaning that if someone is dying they can be taken to the emergency room.

"Insurance -- that's a Washington term," Bush said. And I cannot believe he did.

One of the more telling moments about the free ride Bush has gotten thus far came when Bush again tried to avoid answering whether he supported affirmative action.

"In our state of Texas I worked with the Legislature, both Republicans and Democrats, to pass a law that says if you come in the top 10 percent of your high school class you're automatically admitted to one of our higher institutions of learning," Bush said, calling it "affirmative access."

In actuality, Democratic state Sen. Gonzalo Barrientos, the sponsor of that bill -- which Bush did, indeed, sign -- told Salon in August that he "developed that plan with the help of some university professors. And I passed it through the Senate. [Bush] never called me, he never wrote about it, he never had any press conferences to testify about the bill. So for him to take credit for it like it was his idea, that's just not right."

Gore hit Bush on another point, however, which again exposed how Bush sure doesn't like answering direct questions that might remove the first word from his "compassionate conservative" label.

Lehrer asked Bush if he was against affirmative action.

Gore asked him if he supported it without quotas.

"I'm for what I just described for the lady," Bush said.

Gore asked if Bush supported "what the Supreme Court says is a constitutional way of having affirmative action?"

Bush chose this moment to complain that Gore was breaking debate rules.

And he was. Gore can sure seem obnoxious and overbearing. In between misrepresentations of what he's accomplished in Texas, Bush slyly drove home the point that Gore's style was typical for creatures of Washington. "A lot of people are sick and tired of the bitterness in Washington, D.C., and they don't want any part of politics," Bush said. "They look at Washington and see people pointing fingers and casting blame and saying one thing and doing another. There's a lot of young folks saying, 'Why do I want to be involved with this mess?'"

Responding to the same point -- a question about cynicism among youth -- Gore pressed for the campaign finance reform law offered by Sens. John McCain, R-Ariz., and Russ Feingold, D-Wis.

And therein lay the difference -- pleasant platitudes, signifying nothing, vs. old-school Washingtoniana, a legislative cure-all even for Gen X angst.

This could also be seen in Bush's effective response to Gore's laundry list of solutions to all that ailed the audience -- the immense price tag attached.

"When you total up all the federal spending he wants to do, it's the largest increase in federal spending in years," Bush said. "And there's just not going to be enough money. If this were a spending contest I would come in second." Poking at Gore's hack-pol underbelly, Bush noted, "One of the reasons I was successful as the governor of Texas is because I didn't try to be all things to all people."

Of course, Bush tried to prove his point about Gore's massive spending by citing the extremely partisan study of his proposals by the Republicans on the Senate Budget Committee. Gore protested by describing the citation as one "the journalists said was misleading."