Honey in the vagina 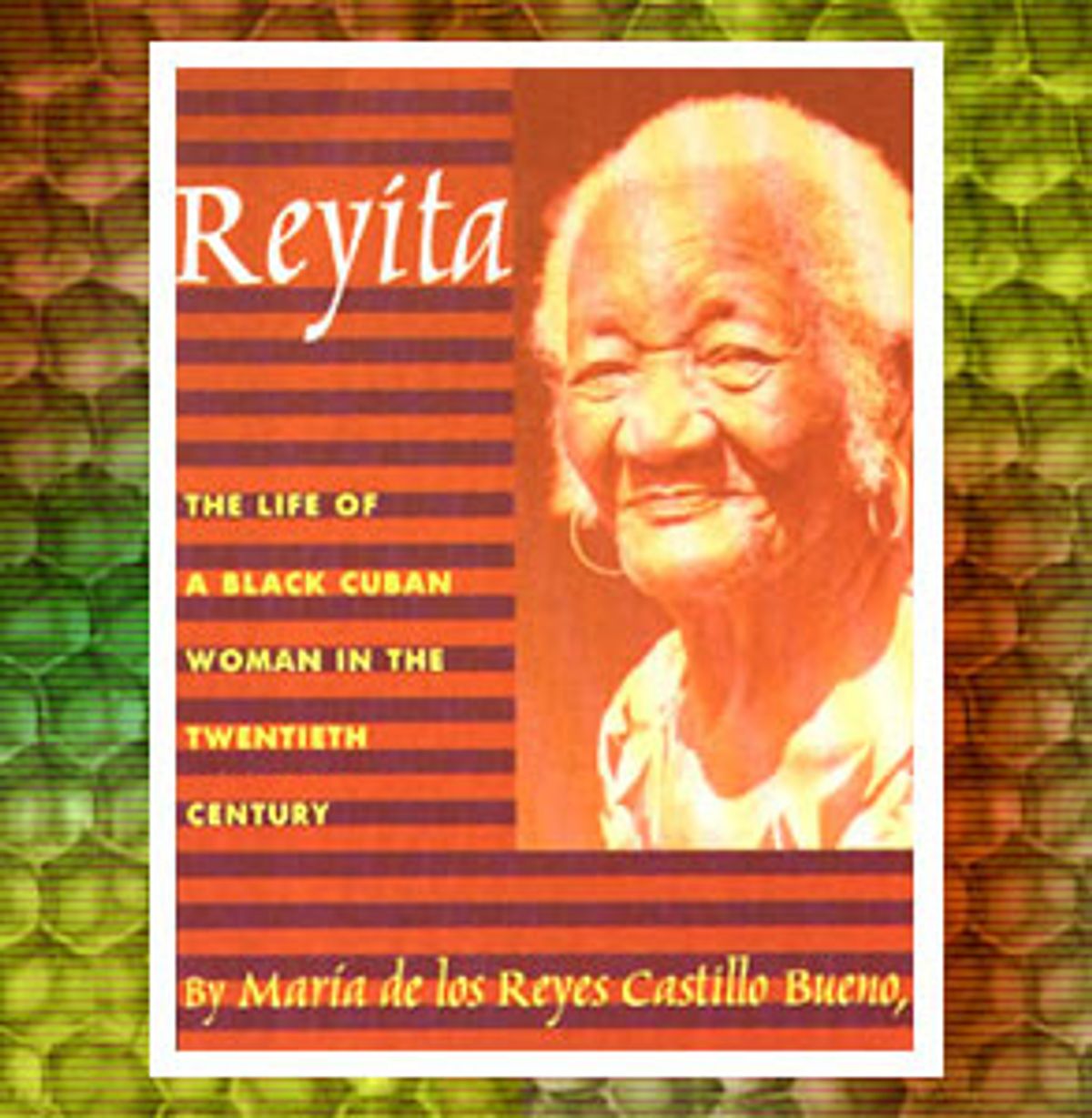 Maria de los Reyes Castillo Bueno was a warm and feisty woman whose fascinating experiences form the heart of "Reyita: The Life of a Black Cuban Woman in the Twentieth Century." This touching, evocative oral memoir, to be published next month by Duke University Press, explores Bueno's personal, family and political struggles from her birth in 1902 until her death three years ago.

Bueno -- Reyita was her nickname -- recounted her life story to her daughter Daisy, one of her eight children, who recorded and preserved her mother's memories. And how lucky for us that she did. This revealing document offers a lively portrait of the life of a self-proclaimed "ordinary person" both before and after the Cuban Revolution. In plain but poetic language that radiates intelligence and dignity, Reyita discusses her life of poverty, her experiences with racial discrimination in Cuba, her spiritual beliefs, her decision to join the revolution, her 118 descendants and, in the following excerpt, her role as the community's practitioner of folk remedies:

In 1952 Rubiera had a duodenal ulcer which burst, despite the treatment he'd received. When I saw him with that huge hemorrhage, I went crazy. And before taking him to the hospital, I knelt down and begged for his life and his health, but not to my Virgencita, but rather to Saint Lazarus, a saint who frightens me with his sores and flies. I promised him if he saved my old man I'd put him in the front hall of my house facing the street sharing the position with the Virgin of Charity of El Cobre. An awesome pledge, if you take into consideration that he wasn't the saint of my devotion! That's why I had faith he would help me. Your dad was saved and I fulfilled my promise when I moved to Bayamo a little while after the old man's illness ...

A long time before, I'd already had experiences as a healer with people other than my own family; I took my first steps when we lived in Cristina, here in Santiago, in about 1950 or 1951. Four or five houses away from mine, a Dr. Portuondo had his consultancy; he was always telling me: "Maria, don't get mixed up in all these cases, it'll only bring you trouble."

Since my neighbors would come to my house for me to sobar un empacho for their kids, bless them, cut an erysipelas -- what they call lymphangitis these days -- give them remedies for asthma, colds or diarrhea, Portuondo told me that not actually to keep me from getting into trouble, but because I was taking clients away from him, who charged money or in kind. I, on the other hand, didn't want anything from anybody; I did it as an act of charity. Another thing Portuondo lost was the commission from the pharmacists, for the medicines he prescribed -- shameless, they were! -- sometimes they'd recommend more medicine than the patients needed, without taking into consideration their poverty.

Once a neighbor came to get me to look at her husband who had a bad stomachache. I went with her, looked at the man, asked the Virgin to inspire me to alleviate his suffering and at that moment I had an idea: I told the woman to go get a bit of corn silk and I made an infusion. When she came back I gave it to the man. As soon as he took it he vomited up a ball that looked like the seed of a toledo mango -- black with white fuzz -- and fainted. The woman, seeing her husband unconscious, began to scream:

Not knowing what to do, I went to get Dr. Portuondo.

When he came and examined the man, he said he was alive, and asked what I'd given him, and I explained. He put the ball into a glass vial to send to a laboratory. I never found out the result; the fact is, the man didn't die for another five or six years, when we didn't live in that neighborhood anymore ...

I began using home remedies, or herbal medicine, after I had you children. At that time health care in Cuba was very neglected: if you didn't have money to pay a doctor and buy medicines, then you could easily die, it was each to his own! Things were revealed to me in dreams, I had this grace or gift; that's how I received the knowledge to cure some pains. These cures always had some spiritual aspect: a bath with leaves or flowers or something.

You know I don't believe in miracles, but in the curative properties of the herbs and roots I used for those remedies, plus the faith and good will with which I made them: they were what really did the healing; I never worked with spirits, just with my inspirations; nor did I ever charge for what I did. I was born with this but I never considered myself a special person.

Now that I'm old I still attend whoever comes to my house looking for help. Mostly mothers who bring me their children so I'll rub out an empacho, or bless them because someone's put an 'evil eye' on them. Doctors don't recognize the empacho. This is nothing more than something they've eaten, that's given them indigestion and stuck in their stomach. It's easy to fix: you pass your hand -- smeared with a bit of oil -- from the pit of the stomach downwards, but gently; then you pull the skin of the back, over the spinal column. If the person is really empachado, you crack it three times, then they have to drink three mouthfuls of water, and the problem is solved.

The 'evil eye' -- which is the depressive state one falls into when they've been elogiado by one with evil vision -- is removed by cleansing the victim, while reciting the oration to Saint Luis Beltran. Animals and plants can also get the 'evil eye,' in those cases the procedure is more complicated. It is a very bad thing, it can even kill.

I have a lot of faith in bee's honey: if you take a spoonful every morning on an empty stomach, you can avoid many illnesses. It can also prevent pregnancy; for this you dab some in the vagina and the spermatozoa stick to it and they can't get any further, so they die without reaching their destination. I told your sister-in-law Amalia this remedy after she'd had nine boys, because if not she was going to give birth to a whole army all by herself!

None of you had problems with puberty because I gave you blood tonics made with senna leaves and brown sugar. I put these in a jar, then topped it up with water and covered it with a piece of gauze, left it out in the sun and the night air for forty-five days, and then I'd give you each a little glass before breakfast. You never had pimples or blackheads and none of you had problems with your periods.

There were a few asthmatics in our family and I cured them with a drink I gave them for breakfast, it's like coffee but made with toasted and ground palm nuts. Now I hear a lot of talk of scabies; we've never had that problem here because when it was going around the neighborhood everyone in my family washed in water boiled with bitter broom leaves. Of course, you have to boil everything you use because it can come in off the street.

Nor did any of you suffer much from diarrhea, because at the first sign I'd give you an infusion of guava sprouts, pomegranate and plantain stem; when my babies were a few months old I always gave them infusions of Castilian rose petals. I never had problems with lice; one of you got them once and I quickly prepared a bottle of alcohol with pig's bile -- I left it for three or four days -- and then scrubbed the scalp of each and every one of you, those that had them and those that didn't, I poisoned all your scalps so I wouldn't have to worry about that again ... When you were little I liked to bathe you in water that had been boiled with sweet potato vines, that's why I didn't have to fight off pimples or rashes, that's why you've all got such lovely, smooth skin.

I've helped many women to get pregnant who couldn't have children -- whether them or their husbands -- with a remedy that both have to take. You make it in the following manner: you put four strips of charcoal wood into a jar, add seven spoonfuls of brown sugar and fill with water, tie a piece of gauze around the top to cover it and leave it be for forty-five days in the sun and the dew. After this time you start to use it and each takes a small glass on an empty stomach. You know it works because after ten years of struggling with your son Vivi, we gave them the remedy and along came Anibal Antonio, my great-grandson! -- the one hundred and eighteenth member of this family.

Now I'm going to tell you a story that's nothing more than an old woman's wickedness. Your niece, Reyita, had a friend who went with her boyfriend, but that relationship didn't end up lasting and about three or four months later she came home. A while later she fell in love again, this time with a boy who had good intentions toward her. Whether out of prejudice or fear of losing him she didn't tell him about this other relationship and the boy thought she was a señorita. As the wedding day approached, she didn't know what to do so she told Reyita, who was the only one to know of her worries. Your niece said to her:

"I've got a grandmother who knows lots of things, let's go see what she can do for you."

She convinced her in the end and brought her to see me. She put me in a terrible fix but something occurred to me and this is what I recommended:

The day of the wedding -- I told her -- you'll need to have a fresh chicken liver. Seven days before, start cleaning yourself with alum water, only seven days, no more, because any more and poor you! The day of the wedding, when you go on your honeymoon, take the chicken liver, well hidden. When you go to wash before getting into bed, put it up in your vagina. The rest, you already know! ... don't think about it, just enjoy the moment. When you come back, come and see me and tell me how you got on.

"Yes, child, do it with faith and you'll see, everything'll be fine."

When she came back, the girl arrived at my house covering me with kisses from the moment she saw me, because every thing went just as planned. That had nothing to do with the gift I was born with; that was the result of experience, of the years, of having seen and heard many things ... besides, it was a bit of a dirty trick. The girl went along trustingly, so her nerves didn't give her away. She abandoned herself to the pleasure happily and in the heat of the moment the boy didn't notice she wasn't a virgin. I still heal and give advice. Thank God everything I recommend turns out all right. You know what they say: "more of the devil's knowledge comes from his age than his job." In my case, I know more from being ancient than old, and because I'm still "alive and kicking."

Maria de los Reyes Castillo Bueno was born in Cuba in 1902 and died three years ago. "Reyita: The Life of a Black Cuban Woman in the Twentieth Century" is an oral account of her experiences.