A massive new biograpy dishes heaps of DiMaggio dirt -- and comes across pretty grubby itself. 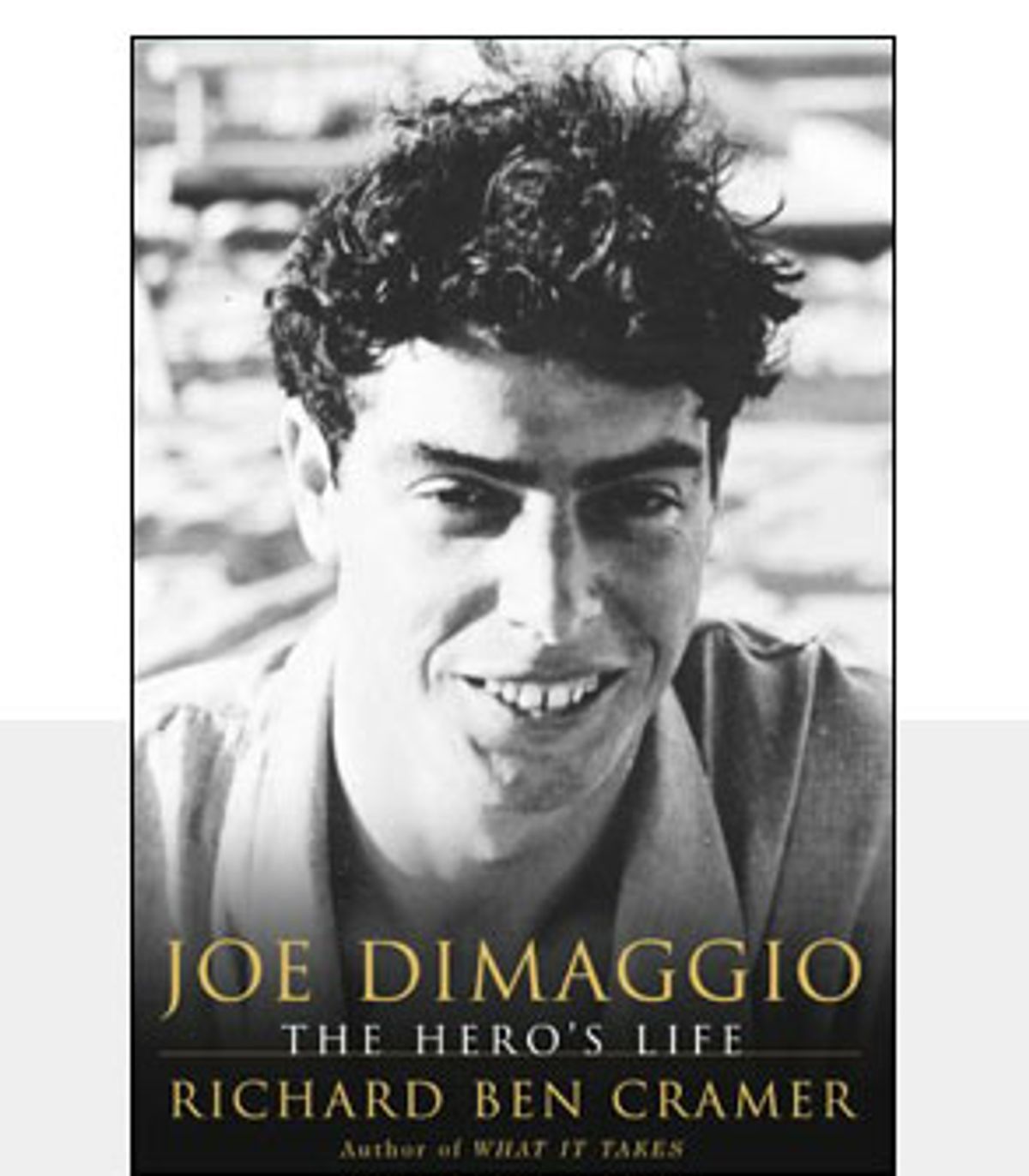 Over a year ago, after Joe DiMaggio's death, I wrote a eulogy for him, published in the Village Voice, unburdening myself of a lifetime of divided feelings. I was raised in an Italian family to whom Joe DiMaggio was a god, but I knew, as a journalist, that the real man was scarcely a hero.

"His private life," I wrote, "was an unholy mess, a riot of contradictions awaiting a tough-mind biographer to sort them out ... All that needs to be done to stir outrage is to recount the unpleasant facts of DiMaggio's life that are already known but which the press unofficially agreed to forget. We can practically see ahead to how his first real biographer will become to sports what Albert Goldman is to rock and roll."

Not all the letters of outrage I received in response to that story were from people whose names ended in vowels. Now Joe has gotten his tough-minded biographer, and I can only imagine the amount of abuse that's headed Richard Ben Cramer's way. "Joe DiMaggio:The Hero's Life" was written without DiMaggio's cooperation -- he apparently dismissed Cramer as "Benny" and refused to talk to him -- but it's so thorough it's doubtful that any other book on DiMaggio will ever be needed.

Cramer seems to have talked to everyone who ever came in contact with DiMaggio, however briefly. (Full disclosure: I am mentioned in the acknowledgments.) The biography doesn't really include any facts about DiMaggio's career and his sometimes sordid private life that haven't been published somewhere before, but not everyone has heard all of them and Cramer has done us the courtesy of gathering them in one place.

For example: Joe was a lousy father -- cold, distant and unnurturing. The famous and oft-reprinted shot of him on the cover of Sport magazine with his arm around Joe Jr. was set up in a rush, with the boy delivered to the shoot by limo and then driven back to his mother. (Joe and his wife, Dorothy Arnold, were separated and Joe seldom saw his son. Joe Jr. died of a drug overdose six months after his father's death.) Joe didn't get along with his brother, Dominic; his attitude toward him was "a changeable mixture of fondness, family loyalty and resentment." (Poor Dom, himself a fine outfielder for the Boston Red Sox. Being Joe DiMaggio's brother couldn't have been easy.) DiMaggio also had some mob ties.

But ask any American and you're likely to hear a complaint about a remote father. (Of course, we ourselves are not bad parents.) Whose relationship with a brother isn't a "changeable mixture"? What Italian-American celebrity born before World War II didn't have "mob ties"? That's not what you're here for, right?

You want the dirt, don't you? OK, he whored around. Polly Adler, who ran "the best whorehouse in New York," sent out for plain cotton sheets because Joe's knees kept slipping on the shiny satin ones. He beat ex-wife Marilyn Monroe at least twice (though she forgave him, and they may have thought about getting remarried before her death). In his middle age, there were some sensational drunken escapades. A former Miss America, Yolande Betbeze, describes an incident at a Paris hotel where Joe was "so drunk ... that his pants were open, with his member lying exposed upon his leg." ("The biggest thing," recalls Miss America, "that you ever saw.")

And then there are "wild bed scenes" involving DiMaggio and Liz Renay, who specialized in Monroe impressions. ("I only come once," Joltin' Joe told her, "but I last a long time.") There is all of this and lots, lots more. And where there weren't prying eyes to catch the sordid details, Cramer imagines them for us. For example, when Joe gets Marilyn alone:

When they'd get to her place and she'd drop that dress on the floor (there was never anything on underneath), and scrub all that shit off her face, and drop the towel coming out of the bathroom, lit perhaps by the one bulb behind her, or the blue of the TV he'd flicked on ... and there she was, his girl, so pale, past vanilla, it was white in her young skin -- dairy milk -- and perfect, tiny-boned, delicate, like a twelve-year-old virgin, childlike as her giggle when he grabbed her, then, covered her with him, filled her, crushed her, sometimes (Christ forgive him) he was trying to kill her ... God, he never wanted to jolt anybody like this girl.

"The blue of the TV"? "Like a twelve-year-old virgin"? Exactly whose fantasy are we wallowing in here? (I don't know about Joltin' Joe, but I have a pretty good idea who Benny would like to jolt -- Christ forgive him.) Here's a scene aboard Joe's fishing boat apparently described to the author by an acquaintance of Joe's, named Dario: "Marilyn couldn't hold on with her hands, so she'd hugged the pole to her body with her left arm, while she tried to reel in with her right hand. She had the pole mashed up against her ample breasts, which were pretty well mashed up by some half-bra anyway ... to Dario, it looked like near over-load." And now -- thanks to Cramer -- to us, too.

This is strange territory for a Pulitzer Prize-winning reporter to roam, though of course George Bush -- the subject of Cramer's acclaimed "What It Takes: The Way to the White House" -- never got to see Marilyn Monroe's towel drop. Nevertheless, all the talk in "Joe DiMaggio" of baseball, money and sex gets a little mind-numbing after 560 pages. Five hundred and sixty pages! I've read six biographies of Lincoln that weren't so long.

Ah, but then the Yankees weren't quite so invincible in Lincoln's time as in DiMaggio's. Cramer is very good on the baseball stuff, much better than, say, David Maraniss was in the football scenes in his much better book, "When Pride Still Mattered," a biography of Vince Lombardi. Joe DiMaggio was so much more than a baseball player to so many people for so long that it's easy to forget that he wouldn't have been any of these things if he hadn't been a great ballplayer first, and Cramer's account of those championship seasons (which owes much to David Halberstam's superb "The Summer of '47") is perhaps the best yet.

But baseball, of course, is not what "Joe DiMaggio: The Hero's Life" is about. It's about, as Cramer intimates in his prologue, the cloak of myth and how it shrunk around DiMaggio over the course of his life; about how a vain, spoiled, selfish, shallow man -- "there hadn't been a day of his life, either at home or on the road with his club, when his needs and wants had not been seen to by others" -- could have become perhaps the most revered living legend in American culture.

This is, perhaps, a great idea for some kind of book, but not a biography, because the real Joe DiMaggio isn't interesting enough to hold a 560-page book together -- especially when there's no baseball or Marilyn Monroe around. The truly interesting subject is not DiMaggio, but exactly what it was about this not particularly intelligent son of a Sicilian fisherman that made American intellectuals from Ernest Hemingway ("Have faith in the Yankees, my son. Think of the great DiMaggio") to Paul Simon ("Where have you gone, Joe DiMaggio?") fawn over him. Cramer's answer to this question is ultimately unsatisfying. "He was, at every turn, one man we could look at who made us feel good. For it was always about how we felt ... It was always about us." Yes, OK, but why did we pick him when there were so many other, worthier candidates around?

Cramer doesn't really try to answer that question. Instead, he relentlessly, pulverizingly tells us that the man wasn't worthy of the legend built up around him -- possibly not even worthy of such a biographer. You can almost hear Cramer's "tsk tsk" on every page. And should we mistake the tone, he sometimes spells his disapproval out for us: "The fact was, DiMaggio was never wistful. And he never spent an instant of his life to marvel at the beauty of anything." (Except, perhaps, Marilyn's dairy-milk skin?) Cramer, it appears, knows everything about Joe DiMaggio except a good reason for writing about him.