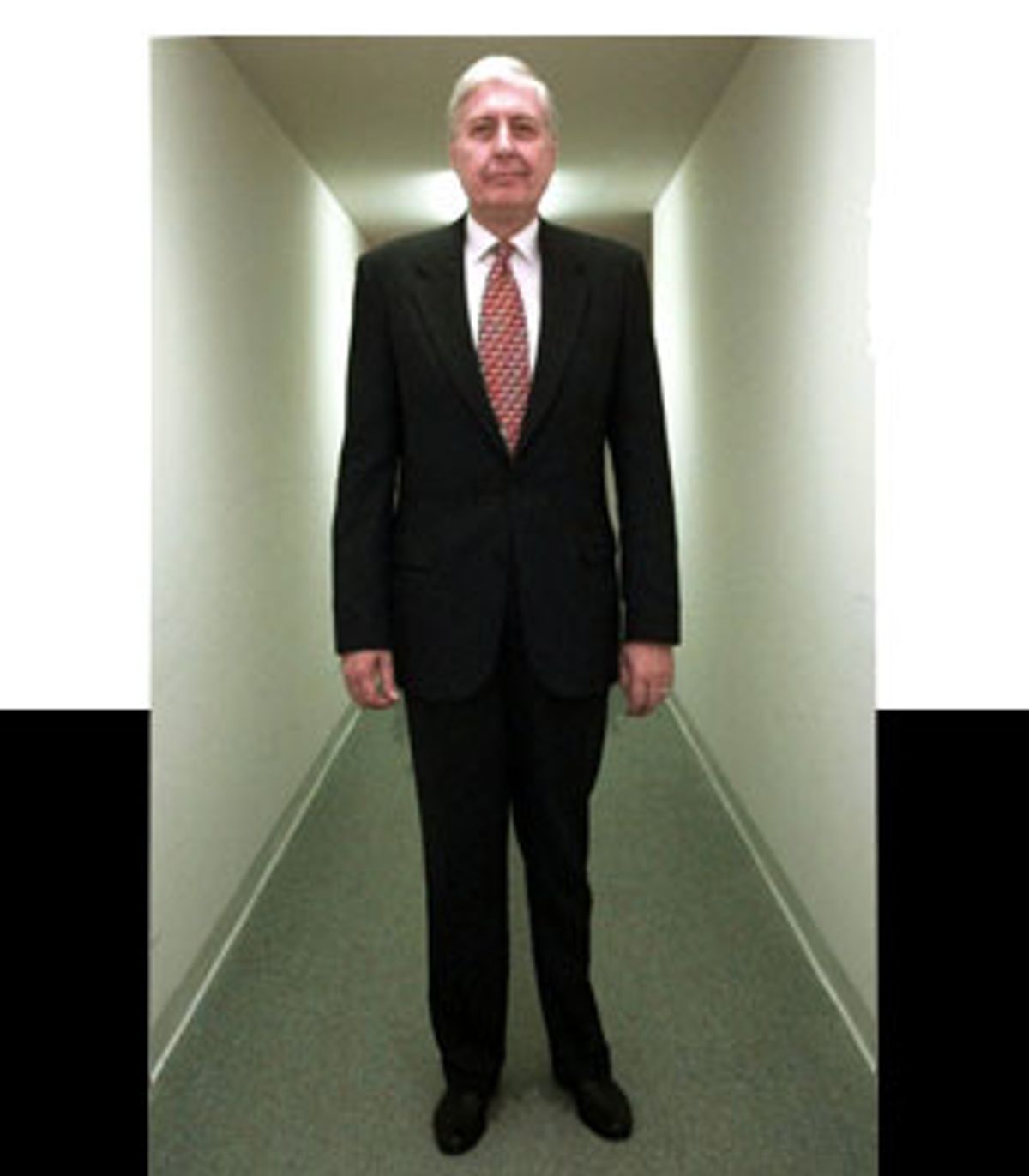 Harry Browne has the best reason for running for president you'll ever hear: "Because my wife told me to."

His wife is probably the only person who could tell Browne -- an investment guru, author and two-time Libertarian Party candidate for president -- what to do. A rouser and snorter among the other candidates, whose positions on the issues are as automatic as a golf course sprinkler system, Browne wants to take an "intrusive, oppressive and obscenely expensive" government and liposuction it thinner than Kate Moss during Lent.

Check out his positions on the issues of the day.

Dope: "On my first day in office I will pardon everyone who has been convicted of a nonviolent federal drug offense."

Guns: "So it's time to face reality and repeal these [gun] laws -- all of them."

Same-sex unions: "Marriage is no business of the state whatsoever. It is between two individuals who want to do whatever they want to do, and that is up to them."

Only 485,798 people (about 0.5 percent) voted for Browne in 1996. But if you want to do a "glass is half full" interpretation of those results, that was 70 percent more than in 1992. Browne got more votes in 1996 than the U.S. Taxpayers, Peace and Freedom and Socialist Workers parties and miscellaneous write-ins put together. This year the 29-year-old Libertarian Party is running about 2,000 candidates nationwide. Some 166 Libertarians now hold elective office, more than twice as many, they claim, as all other third parties combined. We caught up with Browne to talk about money, which, as Tom Neal observed in the film noir classic "Detour," "causes problems in the world simply because there's too little of it."

After you're inaugurated, who goes first? The IRS?

Why not? Anytime you have a government organization that's supposed to collect a tax, it will never be "user friendly." Despite all the attempts to tame it, the IRS will never be warm and cuddly and respect citizens, because it still has the power to coerce them.

What about a flat tax?

As I said, anytime you entrust your government with the power to collect a tax, it will always abuse its citizens. We have to take a hard-nosed, take-no-prisoners attitude toward it and rip the whole thing out.

Tariffs and excise taxes, like the ones you already pay for your telephone, or for gasoline. Of course, the only good tax is a dead tax. We actually need only about $100 billion to run the government, not the $2 trillion-plus we have now. That amount could even maintain a military as long as we didn't want one big enough to shove people around.

Is there something that happened to you that -- Bam! -- made you into a Libertarian?

No. I just always leaned toward it. I mean, I was the kind of person who didn't vote for 30 years. Then one day my wife says I should run for president. So here I am.

What did you think of money when you were a kid?

What do you splurge on?

CDs. I spend a lot on classical music and opera.

Do Libertarians believe in Social Security?

We've got to get out of Social Security. Our parents paid into it for years and the politicians squandered it. There is no trust fund to speak of. We would replace it by selling off our assets -- like the 70 percent of 13 Western states the federal government still owns -- old military bases, reserves of commodities. Those proceeds would go to people still dependent on Social Society, while the rest of us would be free of the Social Security tax and free to invest our money any way we like. If you put aside 5 percent of your paycheck in a regular bank account, you'd do as much as three times better than you would have with Social Security.

What about other taxes, like the so-called death tax?

You turned down federal matching funds in 1996 and now in 2000. Why not take the money?

You wouldn't believe the forms I'd have to fill out. We should get rid of all campaign finance laws -- it's just another case of government thinking it knows more than you do. We would stop all government funding of any political party or candidate. I believe candidates should raise money any way they like. You don't like that this candidate's getting money from Chinese nuns? Don't vote for him. But keep government out of it.

Where do you stand on the minimum wage?

Gone. There should be no minimum wage. The only people profiting from the minimum wage are labor unions who use it to crowd out people from the lower end of the wage pool who can't find any other work.

What kinds of work have you done?

Everything. In the 1960s I was an investment counselor, I wrote books, I published an investment newsletter, and then after years of that I decided to help build the Libertarian Party.

What was your best year ever financially?

That would have to be 1974. My book "You Can Profit From a Monetary Crisis" was a New York Times No. 1 bestseller, and just the paperback rights went for $650,000. As the author, I got just half of that, by the way.

What do you do for money now?

I've spent the last two years building the party, so I rely on my investments.

Do you like the Internet stocks to invest in?

No, no, no ... my portfolio is what I call a permanent portfolio. It's designed to be fail-safe and so it can handle anything the market throws at you. That doesn't include these very volatile Internet stocks.

Do you prefer individual stocks or mutual funds?

Mostly mutual funds. In the last 30 years my portfolio has lost money in only two years. It's very conservative.

Speaking of losing money and the stock market, would you abolish the Securities and Exchange Commission?

There's nothing they can do that you can't do for yourself. We need the government completely out of the stock market. If politicians were really smarter than you, they'd go into the stock market and make billions. But they don't because they aren't. We should abolish the SEC and let you choose your own regulator.

I would work with the Congress to dismantle the Federal Reserve system, yes, and that would eventually mean we wouldn't have Alan Greenspan or any of the others on the Federal Reserve's Board of Governors. We would go back to the gold standard.

I spend money way too easily.

But you don't spend your money on stocks way too easily?

No, I believe individuals need to educate themselves and take responsibility for their financial decisions. I used to like gambling in casinos, but I don't anymore. That's what Internet stocks remind me of -- anytime you try to beat the market's average rate of return, you're speculating. And I'm no speculator.