Why do the networks subject us to these dithering fools? 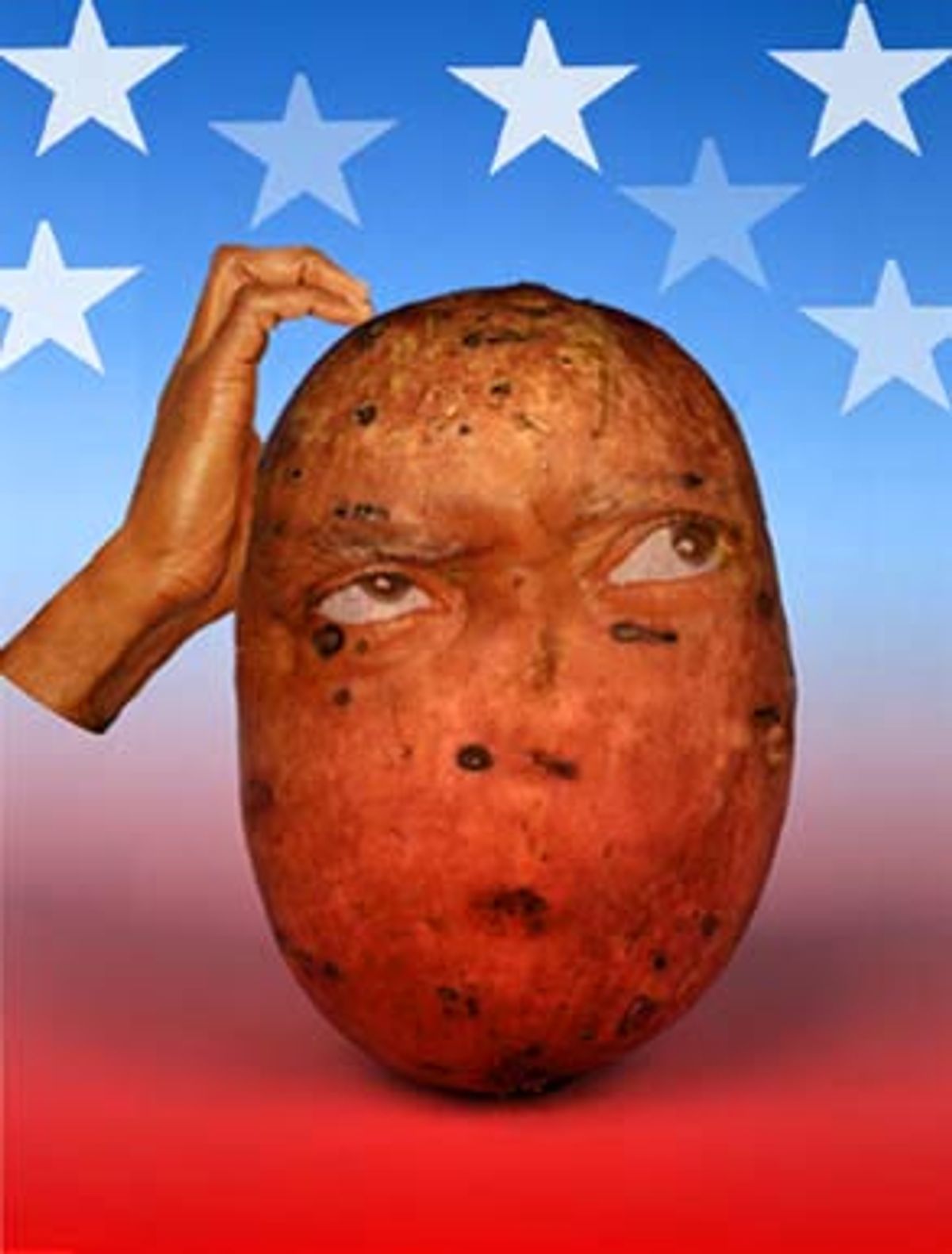 Every fourth October, the American public is insulted by the media attention paid to "undecided voters."

This year, journalists have concluded that the outcome of a close presidential race depends on swing states, and that within those swing states, the outcome depends on the "undecided." "Undecided," of course, means those voters who still have not made up their minds whether to vote Democrat or Republican. (Someone wavering between enthusiastic-for-Nader and hold-the-nose-for-Gore doesn't count.)

So, as in every election, we get the ultimate insult of a 12-to-24-member focus group of everyday individuals in leisure outfits and new haircuts, microscoped like paramecia and wired for any pulsation toward a candidate, parroting to the last syllable what has been said by commentators, when everyone in the news business knows these people are absolute morons.

And yet the candidates are ceaselessly exhorted in print and on air to appeal to undecideds by moving to the "middle." This is not just friendly advice; it goes to the heart of journalists' determination to see the public as apathetic and uninformed. So pervasive is the moving-to-the-middle line that any candidate perceived as not doing enough of it is showing mortal weakness; reporters and anchors almost make little on-air "L's" over their foreheads when mentioning the haplessly ideological Ralph Nader or Pat Buchanan. Thus all candidates have to conform to this perception not to get branded in the press, even though the strategy is particularly destructive for Democratic candidates.

Result: Three "debates" between Bush and Gore, devoid of almost any interest to any citizen who has spent more than two minutes thinking about politics.

Let's put this simply. It is a stone impossibility that the undecideds are waiting until the last minute, once every four years, to make up their minds based on the "issues." No, as their comments show, most of them are not really undecided; if they are waiting for anything, it is to guess which candidate is more likely to win, so they can vote for the winner. (The press euphemism for this is "momentum.") In the meantime, they get on TV. What's not to like?

Please stop polling the undecideds on "the issues"; if they were voting on issues, they wouldn't be undecided. Clearly, if they were voting out of conviction on any social, political or ethical concern, their choice would already be clear. Even given all the efforts by the parties to sound alike, is there any chance that anyone over 20 who cares about the election, or who watches a presidential debate, doesn't know by now where the candidates stand on any issue of real concern? Gun control? Abortion? Consumer protection? Healthcare?

And conversely, is there any realistic possibility that those who don't care enough to make up their mind to vote are going to be energized by the sight of mush debating meringue, on distinctions between "registering" and "licensing" firearms, or which man supports Israel more?

Petty debates and the obsessive polling of people with nothing to say don't serve democracy. In fact, they help to drive down interest and participation, which is already so low that we'll face a constitutional crisis if voter turnout drops any more. Contrary to the prevalent mythology about the crucial undecideds, victory lies in energizing the millions of other people, the ones who don't have to be cajoled into taking a position. Their energies will pull along the undecideds. Johnny-come-latelies always wait for the bandwagon, as both news anchors and the candidates should know by now.

So please do not interview the undecideds, ever again. Leave them alone. It is bad enough when politicians pander to them; it's dangerous to democracy when the press panders to them. This has been a diabolically effective method of disheartening millions of voters -- watching Peter Jennings, Dan Rather, Wolf Blitzer and their buddies tell us that our future depends on a handful of voters who will not take a position until coaxed into it at the last possible minute. It is an insult to the rest of the public, the tens of millions of people who bring themselves to vote without being bribed by TV cameras. It is holding the vast majority of the electorate hostage to the less-informed and least-committed minority.

These people are not undecided. They're irresponsible, and what's more, profoundly uninteresting.

Note: A correction was made to this story after its initial publication.