Tough and grim, sure, but Steve Buscemi's prison drama can't break out of the clich 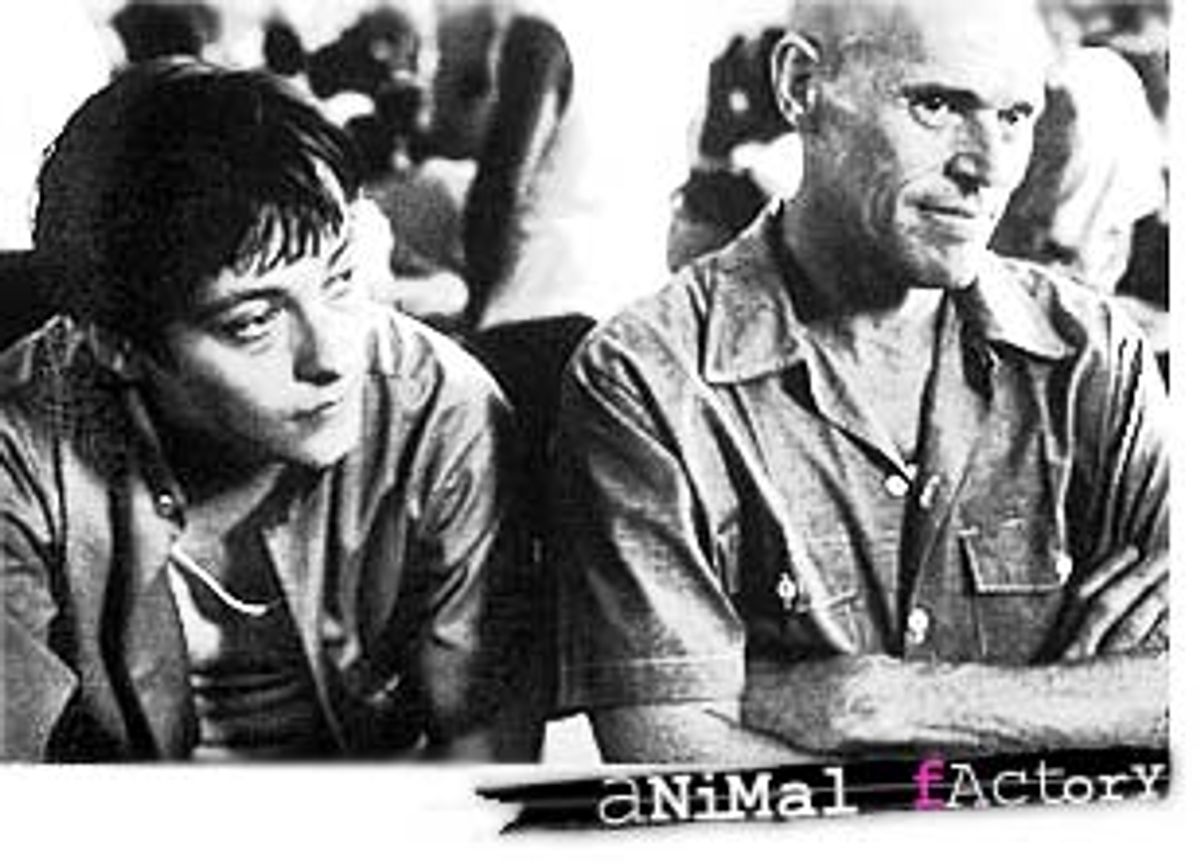 Prison movies can be horrifying little creatures. There's something about the way prison details translate to film -- those dank, patchy concrete walls, those stained toilet bowls and splotchy mattresses, those swaggeringly lascivious convicts always on the hunt for fresh meat -- that make even the most dismal life of nonincarceration seem almost bearable. Sometimes there's a kind of submerged jolliness to the way prison horrors are presented in movies, as if to say to all us scared-straight pansies out there in the audience, "You think life outside the big house is bad ...!"

Steve Buscemi's "Animal Factory" trades freely on all those elements of the genre, and at times it's jaggedly revealing. But Buscemi -- who proved himself to be a director of astonishingly sharp yet delicate gifts with his 1996 feature "Trees Lounge" -- seems to be a little too taken with the idea of rubbing our noses in the grittiness of prison life, to the extent that the more fragile mechanics of his story get shoved into the background.

In addition to presenting us with a slowly unfolding drama, Buscemi (who has also directed an episode of the HBO prison drama "Oz") seems bound and determined to make a humanitarian statement, underscoring the irony of the fact that prisons often make criminals even more hardened instead of rehabilitating them. There's nothing inherently wrong with that idea, it's just that Buscemi's message too often takes a back seat to his story (adapted by Edward Bunker, from his novel), and its slack pacing saps much of the movie's potential power. What's more, Buscemi's compassion would be much more effective if his lead characters were a little less inscrutable. As it is, they are rather anonymous walking symbols of the harshness of prison life, something like the faceless miniature humans you see in architect's models, only with scars, sneers and tattoos.

Young, pretty Ron Decker (Edward Furlong) finds himself facing a 10-year prison sentence in a state penitentiary on a drug-trafficking charge. He quickly realizes that as the new guy -- and a rather good-looking one at that -- he's destined to become the target of all kinds of unwanted sexual attention. First he gets wind that a drug-addled inmate plans to trap him into a gang rape; later, a wild-eyed greaser with a Johnny Cash haircut (Tom Arnold) corners him in a bathroom and announces his intention to make the little filly his own. Decker realizes early on that he needs help fending off the unwanted suitors, so he approaches prison vet Earl Copen (Willem Dafoe), a shaven-headed tough guy who knows all the ropes and who has earned the respect, and in some cases the fear, of both his fellow inmates and his jailers. Copen goes out of his way to help Decker for reasons that aren't immediately clear, and before long the two have formed a kind of wary, rough-and-tumble friendship.

Dafoe, with his saw-toothed Abominable Snowman smile and his pointy devil ears, certainly looks like the kind of con you wouldn't want to tangle with. But he lends his character a steely dignity, and in the moment when he explains to Decker his true reason for helping him -- it's a bit of an inarticulate jumble, but you get the idea -- he radiates an almost ghostly beauty.

Still, he remains fairly opaque until the very end of the picture; that wouldn't be such a problem except that as Furlong plays him, Decker is so bland and unreadable that we stop caring about him in the first few frames. The dialogue is spread thick with prison slang, spoken by a cast of actors who enunciate poorly, just as you suppose real convicts might. That means you have to listen carefully to keep on top of what's going on -- you could call the specialized, muttered dialogue a flaw, but you could just as easily defend it as a viable stylistic choice.

But Furlong (who, along with Dafoe, is on-screen most of the time), barely moves his lips when he talks. Worse yet, he seems to barely care about anything he's saying. His lines come out in an adenoidal whine; his eyes dart nervously all the time, lizard-like, even as they reveal nothing. "I'm not a punk," he asserts to Copen in a lackadaisical drone that makes you feel sorry for anyone who has to be in the lockup with him for any length of time, let alone 10 years. The relationship between Decker and Copen is the fulcrum of the movie. But by the end, even though Copen's motivation in helping Decker has been made crystal-clear, the two characters are still too fuzzy to have any real resonance, and Decker is especially unreadable. Furlong just doesn't give much to the camera, and he makes it hard for an audience to invest anything in him in return.

"Animal Factory" does feature a sprinkling of engaging characters. Buscemi makes an appearance as a dry prison official, and when he shows up, it's like seeing an old friend: He plays one of those by-the-book nebbishes whose collars will never fit right, no matter what size shirt he buys. And, a curiosity if nothing else, Mickey Rourke resurfaces from God knows where to play Decker's cellmate, a transvestite with iridescent green fingernails and a push-up bra. With his troweled-on foundation and berry-red lips, he looks like a cross between Eddie Izzard and Tony Curtis in "Some Like It Hot." (Although, it must be said, he's not half as pretty as either.)

"Animal Factory" is a tough little movie, occasionally bloody and grim: At one point a prisoner slices into his arm with a razor blade, collecting the spurting blood and smearing it all over his body; he also mixes something that looks like excrement into his food and eats it. There are also moments that amaze you with their sheer ingenuity, as when two inmates in cahoots use a toilet as a phone, shouting down into the porcelain.

Mostly, though, "Animal Factory" throws off a disquieting vagueness; you come away with the sense that you should have come to care (or at least to know) more about its central characters than you do. It may be a fact of life that in prison, you never know what the next guy is thinking. But in movies, the audience has to be clued in to what's going on in the characters' heads. Life inside the big house is rough. But keeping us on the other side of the bars isn't going to help us understand it any better.