It might not measure up to the 1967 original, but now Satan's got sooty pussycat eyes and a kitten-cruel smile. 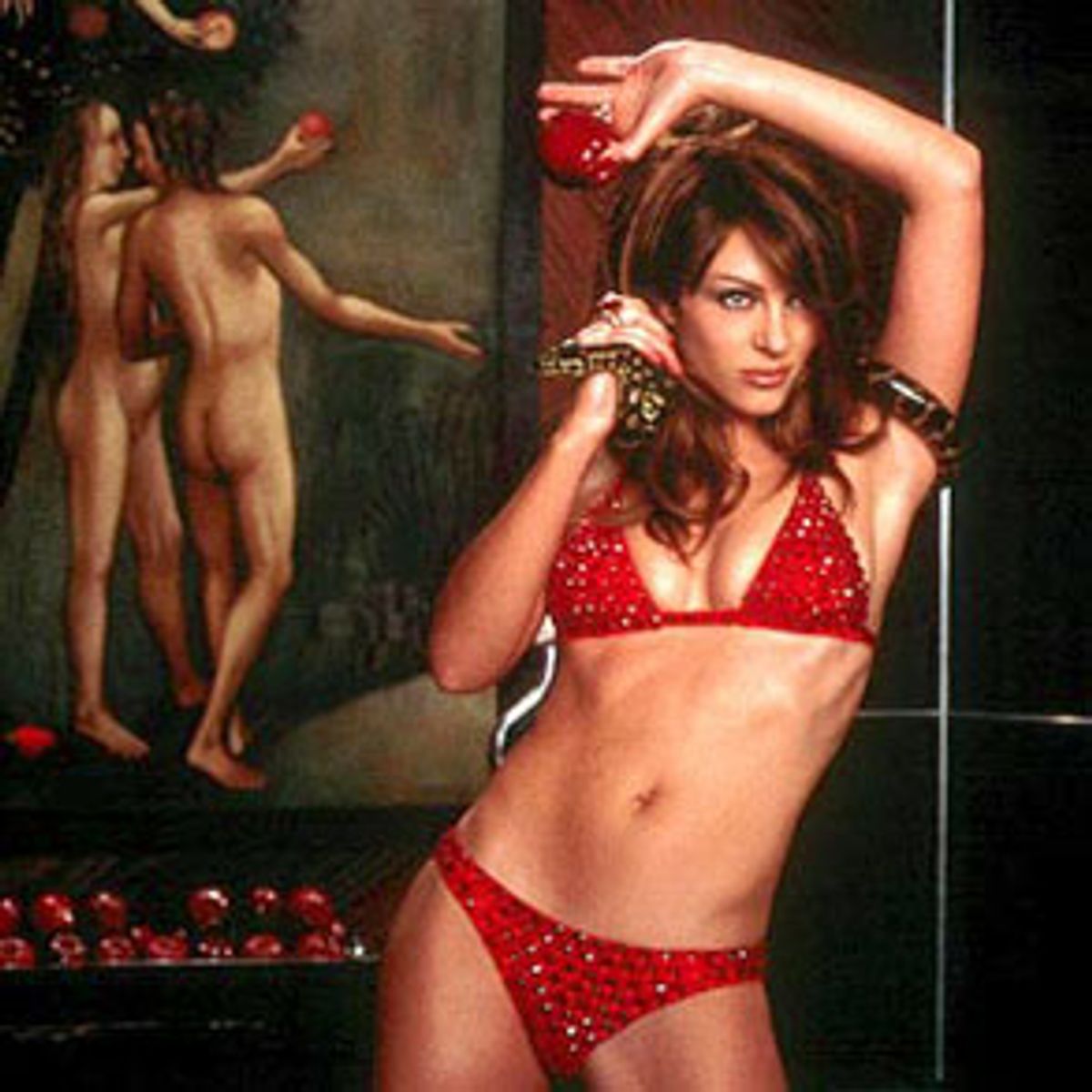 As memorable and undeniably likable as it is, the 1967 Peter Cook-Dudley Moore vehicle "Bedazzled" isn't a particularly seamless package. What makes it swing is the way it gives its stars so much latitude to riff. Cook and Moore's jokes glance off one another obliquely like confused molecules -- there isn't a right angle in sight, or anything, for that matter, that might result in a shape so unhip as a square.

When Cook, as the devil, arrives on Earth to grant hapless milquetoast Moore a cache of wishes in exchange for his soul, all hell doesn't break loose: It slithers around in the form of the duo's wiggly string of gags. I can think of few examples of naughtier brilliance than Cook's removing brand-new LPs from their sleeves, making one broad, thick scratch across each record and then sending them back to be resealed. It's surely the devil at work.

Fans of the original "Bedazzled" -- the ones I've spoken to, at least -- have claimed that it's impossible to remake the film. And in the sense of recapturing the Cook-Moore recipe, it is. But I think retooling "Bedazzled" relies most significantly on getting just the right devil, and you couldn't come up with a more perfect Luciferess than Elizabeth Hurley.

You can't compare her with Cook except in physical framework: They both cut tall, elegant figures and wear their clothes like, well, the devil. But Hurley has something else going for her: a saucy gameness, a gleam in her eye that signals she's up for any kind of mischievous high jinks, whether it's causing parking meters to expire with the snap of her fingers (a joke borrowed from the original) or dropping into a hospital to replace the patients' pills with M&M's and red-hots.

Hurley's devil also has a wicked good time thinking of ways to bollix up the seven wishes she has offered her conquest, lovesick and unpopular computer geek Elliot (Brendan Fraser). Elliot is madly in love with office mate Alison (Frances O'Connor), but she barely knows he's alive.

Just as he's slumping mopily in the bar where Alison has recently rejected him, Hurley shows up on the scene in the first of many, many fabulous crimson or black outfits, her arrival heralded by the thunderous smack of the break in a pool game. After a bit of cajoling -- unsure what to make of her, Elliot at one point accuses her of being a Scientologist -- Hurley's devil persuades her befuddled victim to sign a phone-book-size contract. She then proceeds to fulfill his wishes one at a time, each time finding a small loophole to render the result crushingly unfulfilling. For instance, when Elliot asks to be rich and powerful and married to Alison, he finds himself transformed into a sexy Colombian drug lord whose wife can't stand him.

Fraser refines his requests each time, but there's always something he's forgotten: When our Satan in satin turns him into a star pro basketball player, he finds that his brain, not to mention certain other body parts, have been shrunk down to minuscule proportions.

The devil needs her loyal subjects, and Fraser ambles into the role easily. This new "Bedazzled," written by Harold Ramis, Peter Tolan (with whom Ramis collaborated on "Analyze This") and Larry Gelbart, is much broader than director Stanley Donen's original. The jokes don't have the invisible-boomerang zing of the earlier picture, and the movie's much more slicked up visually.

But Fraser, whose on-the-money comic timing has shone in pictures like "George of the Jungle" and "The Mummy," carries off even the broadest jokes without making them seem ridiculous or smirky. Even with that rugged jaw line and supermasculine brow, he's amusingly convincing as a puppylike loser in saggy clothes, the kind of guy nobody at the office wants to hang out with. And after each successive wish, he navigates his transformation with wit and style -- even when, as a lunkhead basketball player (sporting an albino Afro), he scratches his head dopily as he tries to remember the pager number Hurley has given him (it's 666).

Fraser plays off Hurley beautifully, cruising smoothly on the extended joke that, to plenty of men, a staggeringly gorgeous woman may as well be the devil. He stands up to her bravely, even when he barely knows what to say to her, and his stammering cluelessness only goads her on to increasingly impish acts of deviltry. It doesn't hurt that Hurley is pure pleasure to look at, pulling off one scrumptious visual joke after another. It's worth seeing "Bedazzled" for her outfits alone: glam rock-chick red fur coats with coordinating stiletto boots and slithery liquid evening dresses. (Because she's the devil, she doesn't even have to wait until a scene is over to get a costume change.)

Those afflicted with a weakness for the fair sex are hereby warned: At the screening I attended, several men in the balcony had to be revived with smelling salts after Hurley made an appearance as a substitute teacher at a boys school, wearing a tartan minikilt with tall high-heeled boots.

But then doesn't it make sense that the devil would use every badass trick in the book to get you? Hurley works "Bedazzled" not as a standoffish showgirl but as the cheerful sort who'll whisk you off to a club in her Lamborghini for a night of feckless go-go dancing. With her sooty pussycat eyes and kitten-cruel smile -- not to mention that crisp Carnaby Street accent -- she's temptation personified. But her feline sense of humor is her real secret weapon. "Yes, there's a God," she tells Elliot, rolling her eyes, and, yes, he's a man: "Most men think they're God -- this one just happens to be right." It's no wonder that when she first springs onto the scene in "Bedazzled," her fanfare is Tone Loc's "Wild Thing." Lesser kittens need to carry whips; this one can rule the world with a wisecrack.