Let the big dog out

Al Gore's cowardly refusal to run on President Clinton's legacy -- and let the most masterful politician of his generation campaign for him -- may cost him the election. 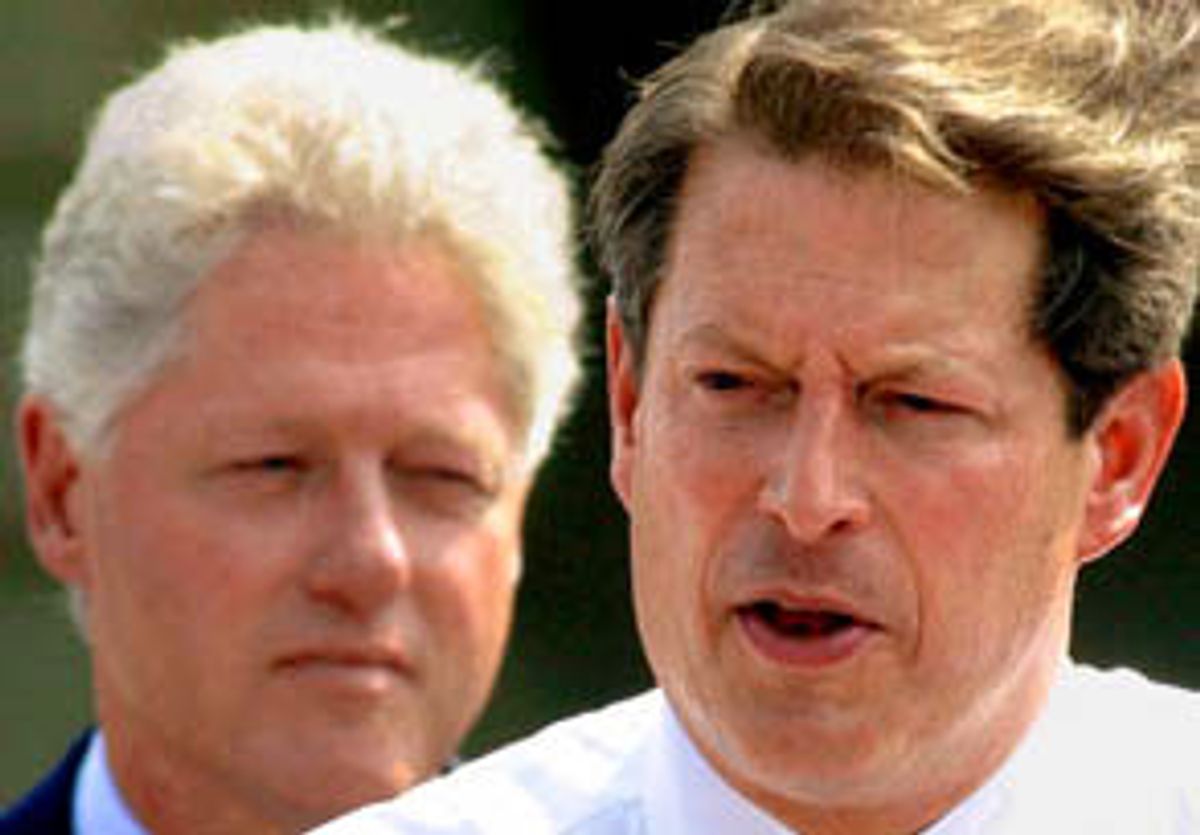 For the first time in this campaign, Vice President Al Gore looked a little like an alpha dog Tuesday night, towering over Gov. George W. Bush literally and figuratively during their last televised debate. He invaded Bush's personal space and made him look like an itty-bitty man (literally and figuratively), a jug-eared, twitchy incompetent, a handsomer Ross Perot. Gore was masterful on the issues, exuding a self-confidence and a readiness to be president that was physical, almost carnal. He bonded with the audience. He wore no orange makeup.

For the first time, in fact, he looked a little like the first alpha dog, President Clinton. But in the end, the mere thought of Clinton diminishes Gore. For it was his cowardly failure to invoke Clinton Tuesday night that made the debate much less a rout than it should have been. And that same cowardice threatens to sink his candidacy, costing his party the White House.

Gore's failure to run on the Clinton legacy is an unconscionable strategic blunder. Far from making him his own man, it serves to neuter him. In fact, Gore's crusade to be his own man is much like his abortive quest for alpha maleness: doomed. Real alpha males don't have to work at it, and guys who are their own men don't, either. More to the point, Gore's attempt to distance himself from Clinton is both futile and self-destructive. It serves as evidence of either spinelessness or bad judgment that just gives voters another reason to reject him.

This election should be a Gore rout. The good news has been repeated so often it threatens to become cliché: The Clinton-Gore administration has presided over the longest economic boom in American history. The U.S. has created 22 million jobs since 1993. The welfare rolls have been cut in half and poverty is at its lowest level in two decades. Crime is down 25 percent on their watch. In fact, virtually every indicator of social malaise -- teen pregnancy, drug abuse, even (slightly) divorce -- has fallen. Times are so good it's almost silly.

Instead, Gore finds himself down by as much as 10 points in national polls, even after his strong debate performance Tuesday night. That's ridiculous. If George Bush could get elected in 1988, despite Iran-Contra, economic stagnation and doubts about his manhood, Al Gore should have been a shoo-in. But there's one crucial difference: Despite personal differences and friction between their two families, Bush vigorously embraced the legacy of his popular predecessor, Ronald Reagan; Gore stands alone.

Friday's New York Times featured a fascinating piece on the frost between the president and vice president. According to Clinton advisors, Gore never writes, he never calls, and the president is hurt. The wives aren't friendly anymore. And Karenna Gore Stiff, I mean Schiff, allowed a rare look of authentic emotion -- disdain -- to mar her otherwise perfectly placid visage when Clinton addressed the Democratic National Convention in August.

But who gives a damn if the families aren't friendly and the two men aren't confidants? The Gore team's calculation that it doesn't need Clinton -- that it in fact profits from keeping its distance from him -- is what matters here, and what threatens to destroy his campaign. (To let Marty Peretz, the loudmouthed owner of the New Republic, blather on about Gore's problems with Clinton to the Times was a particular stroke of idiocy. Why is shutting up the president easier than shutting up Peretz? Who's in charge here?)

I don't doubt the sincerity of the vice president's personal disgust at Clinton's transgressions with Monica Lewinsky, at the hideous judgment and disturbing self-destructive streak that almost brought down their administration. (In fact, I personally share it.) He's entitled to revile him privately.

But the public passed judgment on Clinton and overwhelmingly forgave him, and Gore should have, too. He may have been a bad husband, the vast majority of the nation reasoned, but he's been a good president, and that's all we're supposed to care about. His approval ratings have consistently hovered around 60 percent or higher -- 66 percent in the electoral grand prize of California. Gore needs to get over it.

In the same spirit, Clinton ought to suffer some of Gore's perceived slights privately. The selection of Clinton critic Joe Lieberman as his running mate, which apparently irked the president, was politically wise, helping to inoculate Gore from whatever poison remains in the body politic after the Lewinsky scandal. Clinton screwed up -- big time, in the immortal words of Dick Cheney -- and Gore is to be forgiven, even applauded, for making some political moves to protect himself.

But Gore is sacrificing what could be a potent anti-Republican campaign issue by failing to remind voters what Bush's party did to Clinton, and the country. Every time Bush babbles on about "bipartisanship," Gore should talk about impeachment. The $52 million Kenneth Starr investigation was the GOP gift that kept on giving, miring the country's lawmakers in a tawdry sex scandal while Medicare, Social Security and education went unreformed. Of course, that was the point: The GOP was hell-bent on keeping the president from claiming the policy successes his political victories should have assured him. (The president, it should be acknowledged, helped his enemies immeasurably.)

So on Tuesday night, when Bush began his bland platitudes about partisanship ("You see, in order to get something done on behalf of the people, you have to put partisanship aside") Gore should have chased him up on to his high chair with a lecture on the shame of GOP-imposed gridlock, from the government shutdown through impeachment. But Gore missed the opportunity, thanks to his fear of guilt-by-association with Clinton, and post-debate polling showed that Bush won points for his appeal to bipartisanship.

Clearly, it's time to let the big dog out, to let Clinton be Clinton. The only way for Gore to win the White House is to have the current occupant stump for him from here to Election Day. And not just in black churches, which is where they're probably planning to hide him. Such a strategy is offensive to black voters as well as Clinton. (Why are black people always expected to teach the rest of the nation forgiveness? Because they usually rise to the occasion -- forgiving, for instance, the fact that Democrats come calling every other November when they're in electoral trouble, but mostly ignore them the rest of the time.)

Clinton can help Gore everywhere, from Silicon Valley to Appalachia, from Harrisburg to Hollywood. He's a master politician, the best Democrat since JFK, driven by need and genius to reach out tirelessly to voters and woo them. There is an endless number of stories about him working rubber-chicken political dinners until the hotel staff is putting the chairs up on the table, until the last guest has gone home.

The campaign made its first public overtures to Clinton on Friday when, in full damage control mode, Gore described his boss at the White House to an Associated Press reporter as a "friend," and said the president would help him out during the last 18 days of his campaign. But in a sign that he is still wary of close ties to the president, he failed to spell out what Clinton's role will be.

But the Gore camp's refusal to tap the president until now is not without critics. The California campaign, for instance, is clamoring to bring Clinton to the Golden State. "Here's the reality: Bill Clinton is a masterful and magnificent campaigner, and we are fools if we don't bring him in to close this race," says Garry South, senior political advisor to Gov. Gray Davis, the Gore campaign's California chairman. "He was the first Democrat to carry the state since FDR, and he's a huge asset. From governor on down, we want Clinton back here." Not surprisingly, South was disturbed to find senior Gore advisor Tad Devine telling USA Today Friday there are no plans to have Clinton campaign, anywhere.

That's crazy. The Gore campaign should encourage Clinton to travel the nation, feeling our pain at the passing of his presidency -- this is one pain he truly shares -- and reminding us that electing Gore means never having to really say goodbye to him. We want to see and hear the big fella, his crystal-blue eyes bloodshot from too little sleep, the raspy voice more hoarse than usual from too many stump speeches, reaching out and touching voter after voter until the last polls close in Hawaii.

The psychological and political benefits are incalculable. It's a way for Clinton to atone -- to Gore, and the American people -- for squandering so much of their two terms on Monica. And it's a way for Gore to prove he's his own man, to stand up to the rabid right-wingers -- they're virtually the only ones who support the Gore campaign's fatwa against Clinton, by the way, but they'll never vote for him anyway -- by standing next to the big dog, unafraid, showing us that he can measure up.

If they do that, the Democrats will be singing the nation's scary new sports anthem, "Who Let the Dogs Out?" all the way to Inauguration Day. If they don't, Al Gore is going home to a Tennessee doghouse. Maybe his friend Marty Peretz will let him edit the New Republic, so he can return to his journalism career sooner than he ever expected.