Did George W. Bush serve his time in the National Guard or didn't he? There may never be a firm answer, but the question lives on and on. 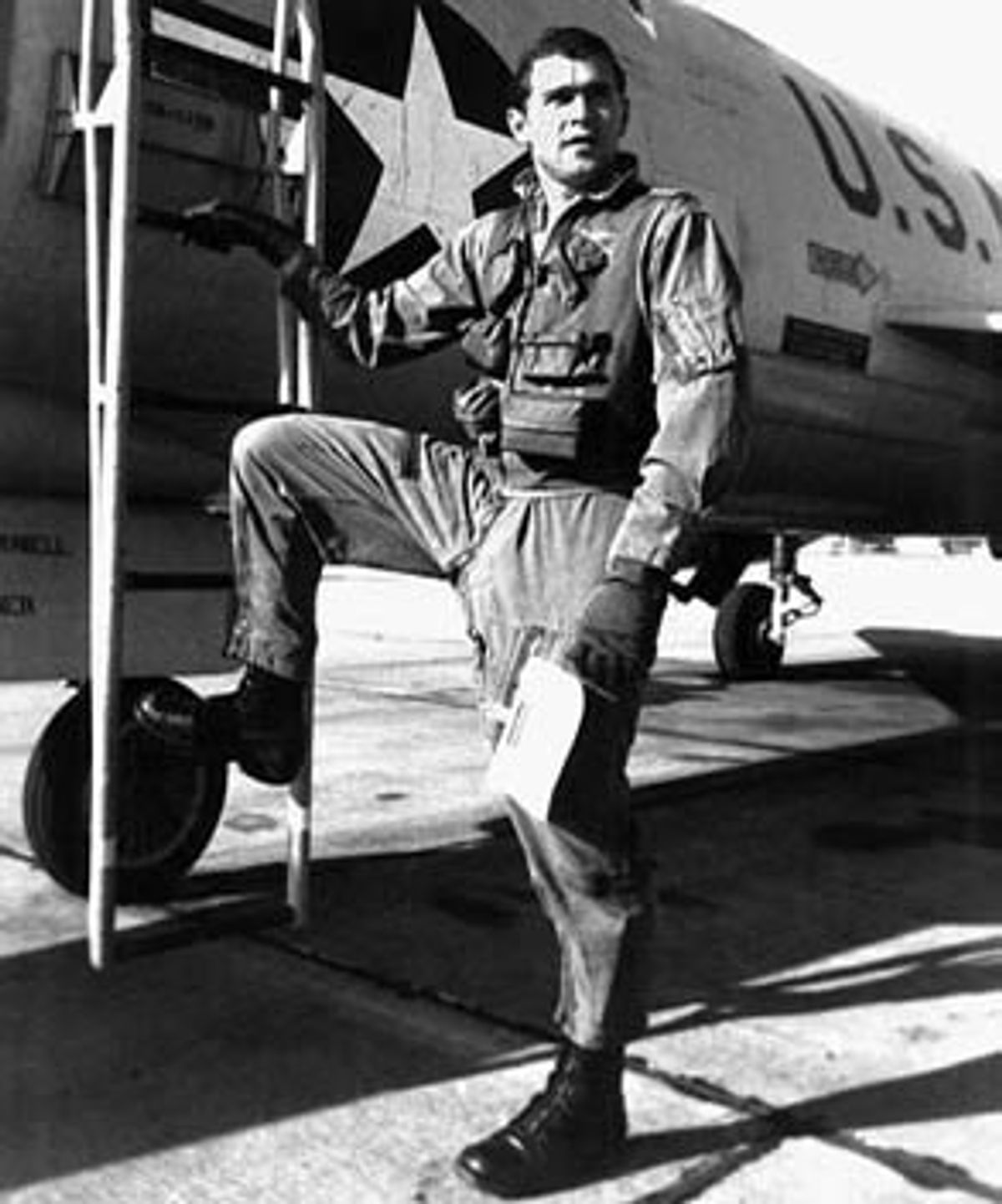 In the last few weeks, political reporters' in boxes have been filled with dozens of e-mails, all asking the same question:

As a concerned citizen of the United States, I am shocked that you have not given any coverage to the biggest scandal of this Presidential campaign: namely, that George W. Bush did not complete his military obligations to the National Guard during the Vietnam War, and has consistently lied by saying that he did.

The passage comes from a form letter courtesy of democrats.com, a news and bulletin board site for Democrats hosted by a New York Web design firm for Democratic candidates with no direct affiliation with the Democratic Party. Their site offers the letter and mailing list of hundreds of political reporters, enabling surfers to cut, paste and spam the national press corps with one of the campaign's most persistent political rumors.

They stem from the confusion over Bush's last two years of service in the National Guard, from 1972 to 1974. On May 24, 1972, Bush requested in writing a six-month transfer to a reserve unit in Alabama so that he could work on family friend Winton Blount's U.S. Senate campaign. But the Alabama unit was little more than a remote outpost, Bush would not be able to complete his flying duties there, and his request was denied. But Bush was already gone, giving up his flying career in the process. On Sept. 5, Bush wrote to a colonel at his unit in Texas, requesting permission to serve with another Alabama-based unit. That request was approved. Bush was ordered to report to Dannelly Air Force Base in Montgomery on Oct. 7 and 8.

But there are questions over whether Bush ever actually served in Alabama. The officer Bush was supposed to report to, Lt. Col. William Turnipseed, says he never saw Bush. Bush swears he was there. "Governor Bush specifically remembers pulling duty in Montgomery and respectfully disagrees with the colonel," Bush spokesman Dan Bartlett told George Magazine.

Whether this is the "biggest scandal of this presidential campaign" as Democrats.com's Bob Fertik says, is, to say the least, an arguable point. But while it has all but petered out in most print media, the story continues to thrive on the Web. Fertik says the mainstream press is overlooking what should be a fundamental issue in determining who becomes the next president of the United States.

"The issue of honesty, integrity and who's telling the truth has been probably the most important issue Bush has used against Gore in this campaign," Fertik says. "Bush says, 'I reported, I served my time.' Well, if he's lying about something this fundamental that's an issue that should be taken into account."

As a result, Democrats.com and a group of Alabama Vietnam veterans are now offering a $2,000 reward for proof that Bush reported for Guard duty in Alabama in 1972. But in the meantime, Fertik and his group have been screaming to get the media focused on this issue. And, he says, "the Internet is perfect way to do that."

While it is untrue that the print media has ignored this story -- in fact, it was first reported by the Boston Globe and has been followed by Newsweek, the New Republic and others -- the story's oxygen source continues to be the Internet.

Most subsequent stories have been based primarily on the research in the Globe story, written by Walter Robinson. The next significant piece came from Marty Heldt, an Iowa farmer who subpoenaed Bush's military records through a Freedom of Information Act request and published his findings in TomPaine.com. Heldt shed more light on the chronology of Bush's so-called missing year, reporting that from May to August of 1972 Bush "did not have orders to be at any unit anywhere."

Heldt also found inconsistencies in National Guard reports. Apparently, Bush's commanding officer in Texas, Col. William Harris, thought that Bush was "performing equivalent training in a nonflying role with the 187th Tac Recon Group at Dannelly ANG Base" in Alabama when, in fact, he was not. "This was incorrect," Heldt writes of Harris' view that Bush was serving in Alabama. "Bush didn't apply for duty at Dannelly Air Force Base until September 1972. From May until September he was in limbo, his temporary orders having been rejected. And when his orders to appear at Dannelly came through he still didn't appear."

Heldt's piece was then picked up by Democrats.com. That's when the e-mail carpet bombing, began as the mainstream media mostly took a pass.

But the drum beat about Bush's war record continues online. The three largest recent stories on the topic are all online only, including one at George Magazine, which concludes, by and large, by giving Bush the benefit of the doubt. The George piece, penned by Peter Keating and Karthik Thyagarajan, concludes that "Bush may have received favorable treatment to get into the Guard, served irregularly after the spring of 1972 and got an expedited discharge, but he did accumulate the days of service required of him for his ultimate honorable discharge." The central controversy surrounds one page of Bush's record where the corner of the page is torn off. Keating is convinced that the circumstantial evidence -- thetorn page that he argues is Bush's record from November '72 to May '73 -- is strong enough to indicate that Bush did indeed report for duty for one day in Alabama in November 1972. Heldt and Robinson both say there is no way of knowing that from the damaged document, or even what that document is. The page is ripped, so no dates or names appear on the page, but it appeared in the sequence of documents where Bush's '72-'73 record was supposed to appear.

"I think Marty Heldt did an impressive amount of research and what we set out to do is to see how far we could extend that research," Keating said. "In the end, I don't think he had the full story, but the Web allows people to self-publish whether they have the whole story or not. That seems like a negative thing, but it's an interactive medium. At least there can be some back and forth in a way that's not possible in print."

Heldt's piece and the Democrats.com piece by Robert A. Rogers both conclude that there are serious holes in the Bush military record. Democrats.com goes beyond the evidence to offer some theories about why those holes exist, and where Bush was when he was allegedly AWOL.

Certainly, the Web has served as a petri dish for all sorts of conspiracies, including those about political candidates. Throughout the month of September, a widely-circulated rumor whizzed across the Internet that Dick Cheney would remove himself from the GOP ticket due to some trumped-up heart problem, and that Colin Powell or John McCain would take his place.

This particular story's life seemed to fade pretty quickly. "Given the information that suggests Bush skipped out of a year of his military service, the story has gotten remarkably little attention," Robinson said. "But in politics and journalism, timing is everything. We're in the news business, and in the news business, you publish a story when you get it. If we'd published this story in September, there's no question it would have gotten much more attention." But Robinson sounded a note of fatalism about his story. "No reporter thinks his or her story ever gets the attention it should receive," he quipped.

But these stories are tailor-made to enjoy long lifespans on the Internet. Is it a case of the Internet gone haywire? Or is the print media walking away from a story they can't pin down? The answer, Keating says, is yes to both.

The record shows that Bush gave up flying, seemingly overnight, Keating says. Records show that he did not fly again after leaving for Alabama. That, Keating says, is puzzling. "It brings up the deeper question. A switch does seem to flip where he decides not to fly anymore. I think it's worth asking about why he suddenly decided not to fly again. That's a worthwhile question to ask."