Who ya gonna call? Patent busters! 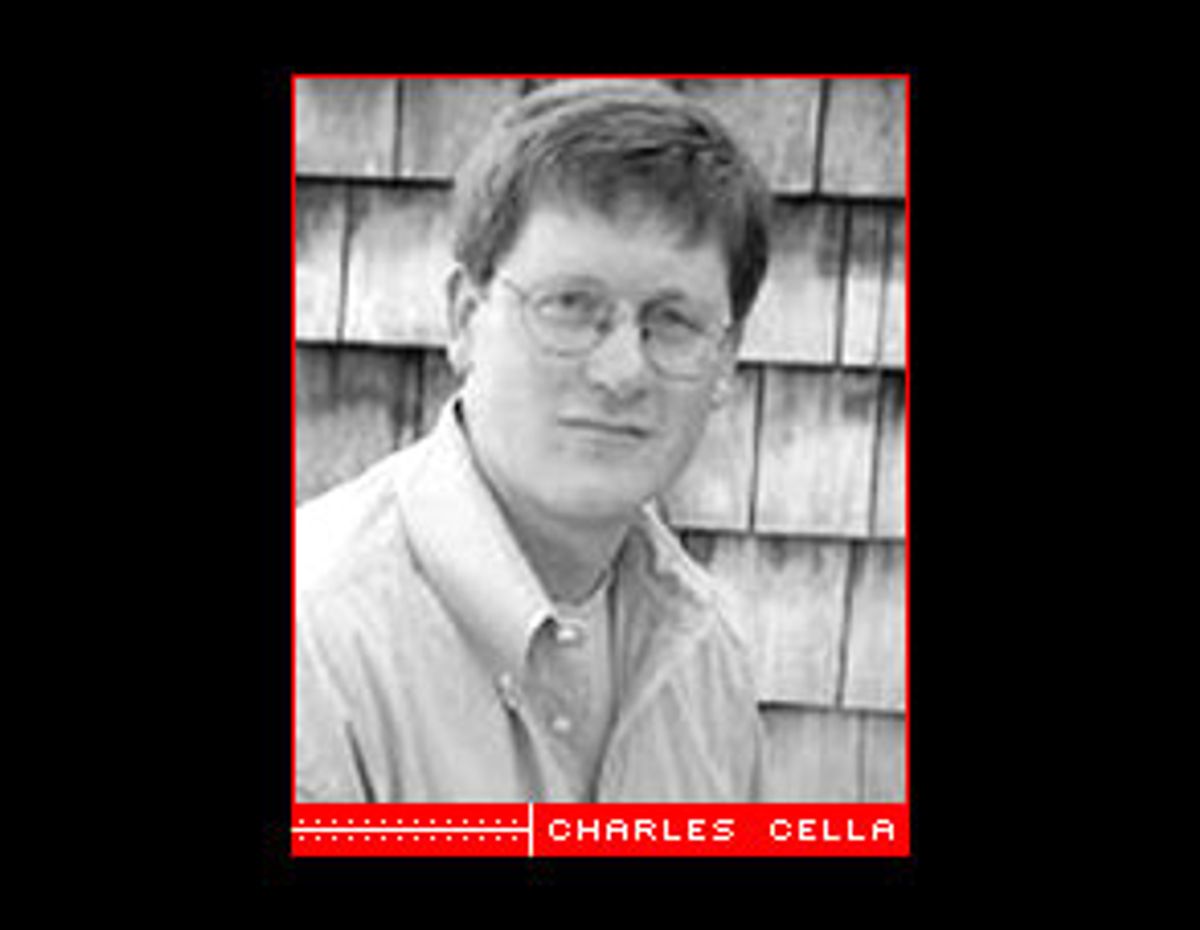 "Prior art," says Cella, referring to a legal term used to describe inventions that invalidate patents by proving that they aren't new ideas, "is just too hard to find."

Which is where BountyQuest, Cella's new company, comes in. Launched on Wednesday, BountyQuest aims to quell the raging debate over the validity of Internet business method patents by becoming a one-stop shop for prior art information exchange. Cella, a 34-year-old Kentucky native, says it will be a forum where anyone who questions a patent's validity can attract relevant prior art by offering financial incentives -- bounty payments that start at $10,000. Instead of simply complaining, for example, that Priceline.com founder Jay Walker doesn't have the right to patent the concept of a reverse auction, a critic could publish a document on BountyQuest proving that someone else thought of the idea -- and collect a nice chunk of change in the process.

Cella considers BountyQuest to be not just a potentially profitable business, but also a market-based example of reform. Amazon.com's Jeff Bezos and computer book publisher Tim O'Reilly, two prominent Internet players who have fought with each other about the patent system, are serving as corporate advisors to the new Web site. Both men are also investors. (Bezos has contributed more than $1 million.)

But will BountyQuest actually make a difference? There were 2,600 applications for Internet business method patents last year, up from 700 in 1996. Can BountyQuest stem that tide, even as it contributes to the flow? Cella has already managed to win a patent for BountyQuest's own business method. Even O'Reilly isn't sure: "It's not enough," he says of BountyQuest, refusing to say how much he invested. "It's necessary but not sufficient."

Patents and the Internet are clearly a hot topic -- the BountyQuest site is already enjoying a wave of media publicity. Cella was eager to sit down with Salon to explain the site in more detail.

Many people have argued that companies shouldn't be seeking Internet business method patents because they limit innovation and run counter to the open, shared nature of the Net. So aren't you contributing to this problem by patenting your own business model -- which looks to me a lot like a simple B2B marketplace?

We see it as a question of: Do you have a patent system or do you not have a patent system? We definitely believe in having a patent system; we believe it encourages innovation. But patents are a double-edged sword. Every patent encourages innovation by restricting competition, so they're all good and all bad. The real question for us goes on a patent-by-patent basis, not a whole classification of type of patents, but rather, we look at each thing and see if it's valid or not.

And we believe what we have is unique. In fact, we think we're going to change the way that knowledgeable people around the world are rewarded for their information. We think that's a significant and important innovation. If it turns out we weren't first, we'll be the first ones to tell you. We're proving that by putting up a large reward on our own patent.

How much is that reward?

It is an odd number, and there's a reason for it. Maybe this just proves we're geeks, but it allowed us to make the total bounties on day one $314,159, which are the first six digits of pi.

Really, though, we see [our own patent] as a way of putting it to the test. In our case, if someone knocks it out, it validates our business model and if they can't knock it out, it proves our patent so we're happy either way.

I noticed that Amazon's controversial one-click patent is also up for bounty on your site -- did Bezos put up the cash to bust his own patent?

Actually, Tim [O'Reilly] put up the bounty for that. But Jeff was happy to have us do that, I believe, because it shows the belief he has in BountyQuest as the best way to find prior art. If people can't knock out that patent, people will feel they had a voice and an opportunity to weigh in on it. It will help validate the patent. And if they knock it out, I think he, like us, will see that as proof that BountyQuest is a great way of giving a voice to a community that cares about patent reform.

How many patents are up for busting right now?

We've got 23 up today and more in the pipeline.

When these companies came to you and agreed to put up cash for information that would invalidate a patent they don't want to license, how do you ensure that the company or individual would be able to pay?

Through a variety of conventional business methods. In some cases we have pretty long-standing relationships, and a high degree of confidence that they'll pay. If it's a major law firm, for example, and they say they'll pay, we believe them. In other cases we provide escrow accounts or allow companies to post a bond. In any event, we certainly stand behind the bounty itself. We'll make sure the bounty hunter gets paid.

And the other side of the coin? How do you plan to keep people from bringing forward prior art that's falsified just to gain the reward?

The great thing about it is that in order to invalidate a patent, the information has to be published. "Published" is a very broad definition, but there is a definition in patent law and it basically means you have to be able to find it in an index somewhere. That might be a card catalog in a library in China, but the point is that you have to be able to find it. So if there's any question, we can actually retrace the path to the information and make sure it is where the bounty hunter says it's going to be.

In order to tell whether or not it meets the requirements, the posters themselves will rank each of the submissions and we will audit those ratings to make sure that if there is a winning submission, the bounty hunter gets paid.

What we're trying to do is build a unique Internet destination where people who have knowledge all around the world are rewarded for that knowledge. We're starting in the patent area because we know there's a desperate need for information in that area, and that there are already people spending a significant amount of money for information in that area -- in other words, it's a great source of rewards.

What else, besides patent information, do you hope to eventually include? What else do you think is valuable enough to warrant a bounty?

Anything is possible. The beauty of this business model is that its upper boundary is the upper boundary of the value of all information. We obviously can't execute in all these markets on day one, so we picked this very cash-based place where people are already spending money to start. I would anticipate it growing into other types of information that this community handles, information about chemistry and semiconductors and business methods in the insurance industry and the like. Patents cover every industry, so I would expect that business information that's relevant to business decisions would be a natural for postings.

Your site says that the site is "good for everyone except companies who are trying to enforce bad patents." Are you referring to any companies in particular, like Walker Digital, whose main business strategy is to hoard patents and charge licensing fees?

I'm not the right person to answer that question, our community is. We certainly think there are bad patents. Every patent has an impact on consumers by raising prices, passed through to them from patent licensing fees, for example ... But what we do is invite people to come to the site and tell us what patents ought to be up there. We invite people to contribute. People might use us for a whole range of things, some because their business is threatened, but others will do it just because they want the patent to be knocked out for the public good.

What does the patent office think of BountyQuest?

And I think they will very much like our efforts on the front of building a much better reservoir of prior art. We're excited about working with them to help improve their own techniques for getting prior art, because again we think it's good for everyone.

What exactly do you think needs fixing at their office?

The patent office is faced with what I consider one of the toughest jobs in the world. They're given a few hours to search to determine whether something that's very complicated is new or not. What do you do: surf all of the 2.3 billion pages on the Web? It's an impossible job. And it's what needs fixing. Instead of having one person looking at 2 billion pages, let's have 2 billion people looking at one page each. If we could do that I think we would have a patent system that worked the way it was intended.

Do you think O'Reilly has been too tough on the patent office?

Everyone is entitled to their point of view. I'd ask Tim. My own view is that they have a really, really tough job and I would be surprised if anyone could do it as well as they do.

How did you manage to get Jeff Bezos and Tim O'Reilly involved?

We've got a saying around here that "the moral authority of a patent is only as good as the patent system that produces it." We saw that the patent system was taking a lot of hits, from people like Tim O'Reilly, who was very frustrated by certain patents. And what we recognized was that we could have a market-based reform. Rather than lobbying Congress to change the rules, let's give the Internet community a voice and an opportunity to speak out -- and reward them for doing it.

Once we saw this reform element -- that we were actually going to help clean up the patent system -- it was easy to recognize who else out there seemed to have a passion for patent reform. So we followed the string of dialogue between Tim and Jeff and said, "These are people who we think are very interested in patent reform, let's go see them."

How do you make money in all of this?

Our posters pay for the postings, so we receive [$2,500] from companies that need this information and need it very badly. We also take a 40 percent fee on top of the bounty.

I think patents are here to stay. The U.S. has basically used its influence in favor of a patent system all around the world through international treaties. So I don't think we're going to see major political shifts. It's a rapidly growing marketplace. There are many more patents issuing today in more fields than ever before. What I would expect is to see patents deepening their influence in every aspect of society. The other thing I would see is us playing a major part in the knowledge economy that's growing. People have been saying it's the information age for a long time, but we think this is one of the first times that people who have knowledge can really be tapped for that and rewarded significantly -- while leaving them to do what they're already doing. We're not hiring them or moving them from where they already are. They're seeking knowledge for its own sake, and we're going to find them and reward them.