"Your Name Here" by John Ashbery

A great American poet delivers one of his most emotional, honest and generous collections. 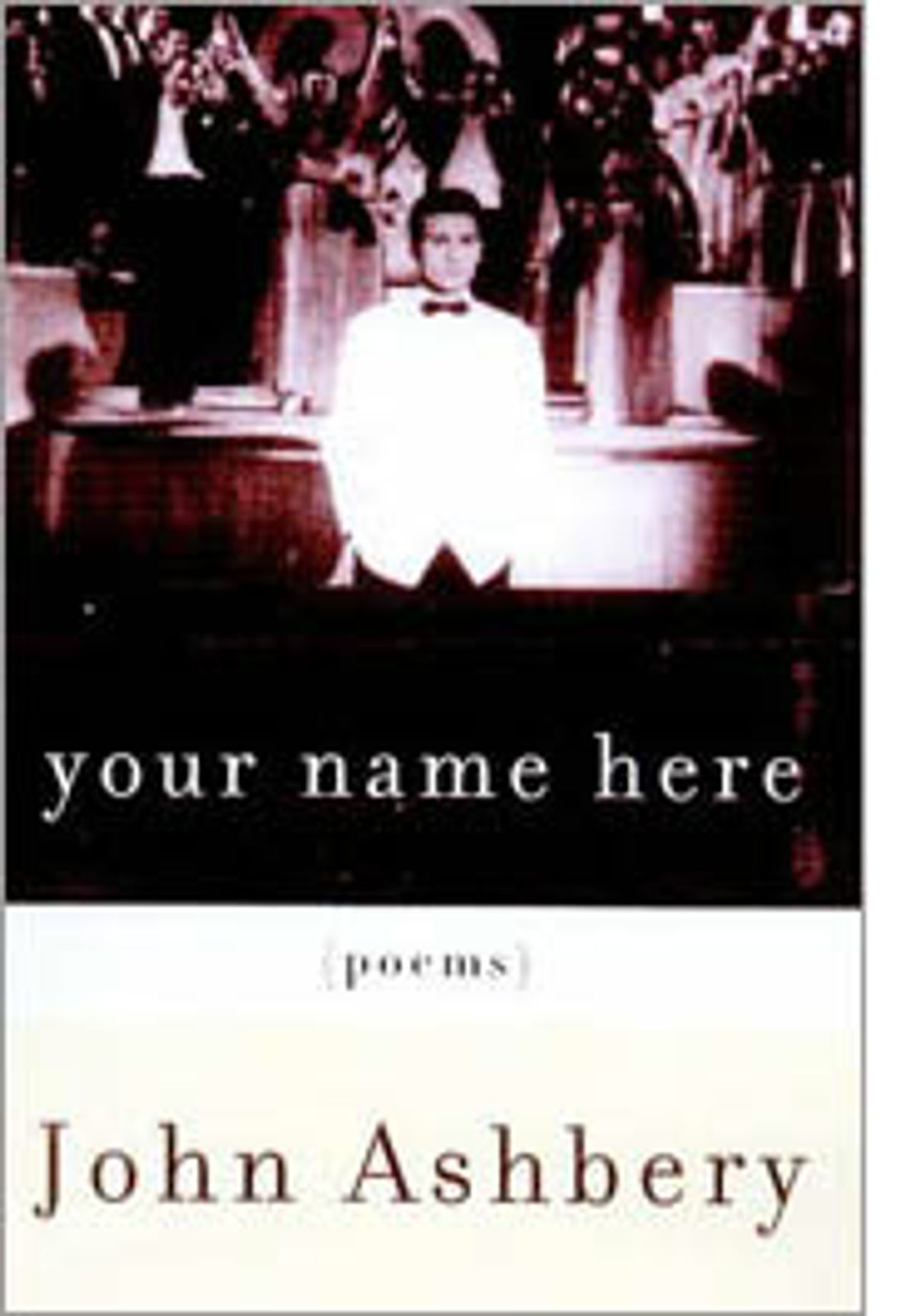 To read a poem by John Ashbery is to encounter a mysterious, occasionally frustrating collection of events and emotions that, while they don't necessarily make any kind of linear sense, can be extraordinarily compelling. Even if a line seems illogical -- and there are many such lines in Ashbery's work -- it's integral to the poem in the same way that the random thoughts each of us has on a given day make up the fabric of our existence: Did I remember to lock the door? That woman on the subway looked like my best friend from second grade. I wonder what she's doing. What's it really like to be a policeman?

As a result of this ontological bounty, Ashbery has been categorized, during his 50 years as one of America's "famous" poets, as difficult. He doesn't write autobiographical or confessional poems in the traditional sense. He assumes numerous personas, skipping around from "I" to "he" to "you" with almost reckless abandon. When this approach works, it's whimsical and charming, delivering a great wallop of emotion by capturing what is universal in human experience but refusing to view it from a single perspective. When it doesn't, it produces poems so oblique as to be frustrating, poems that, because they seem like nonsense, seem slight as well.

"Your Name Here," Ashbery's 21st book of verse, contains both kinds of poems. It tends more toward the palpably emotional than many of his previous collections, perhaps because he's reached an age that precipitates stock-taking. Still, he can't help reminding us that it's a mistake to look to poetry for philosophical answers. Even the title of the book implies that we shouldn't take Ashbery too seriously. Like so much of his work, the phrase "Your Name Here" is at once inclusive and self-effacing, the very mix that allows him to offer wisdom between the lines, as it were, of even his most perplexing poems. For example, a piece called "The Water Inspector" begins: "Scramble the 'Believer' buttons. Silence the chickens. We have more important things, like intelligence." What the hell is he talking about? Right when you're ready to throw the book down in annoyance, however, Ashbery comes in for the save with such grace that confusion is banished: "We say so many cruel things in a lifetime, and yet. In a whorehouse, young, I obfuscated. Destiny was this and that, no it was about this and that. Do you see what I'm saying? Nobody needs the whole truth."

As in life, a larger revelation makes what comes before it obsolete. But just as you won't find out any more truth than you need to in life, you won't find out who Ashbery is from reading this book. There is the occasional sign: The book and one poem in it are dedicated to a former lover, and there is a mention of Ashbery's brother, who died when they were both boys, but mostly the poet tries on a whole crowd of personalities here, playing dodge-'em with his readers. Among them is a Scandinavian man reflecting on his childhood in one of the collection's most enigmatic and incandescent pieces. "They Don't Just Go Away, Either" begins with a fairy-tale opener:

In Scandinavia, where snow falls frequently
in winter, then lies around for quite some time,
lucky cousins were living in a time-vault of sorts.

and continues on to a rather astonishing image of the constant, inevitable evolution of a life:

More fanciful patterns await us further along
in our destiny, I tell him, and he agrees; anything
to be rid of me and on to the next customer.
Outside, in the street, a length of silk unspools beautifully,
rejoicing in its doom.

It's a gorgeous moment, and there are many others here as well. In particular, a tiny poem called "Stanzas Before Time" is a perfect embodiment of Ashbery's power to make us accept his ambiguities simply by overwhelming us with the generosity of his heart:

Quietly as if it could be
otherwise, the ocean turns
and slinks back into her panties.

Reefs must know something of this,
and all the incurious red fish
that float ditsily in schools,

wondering which school is best.
I'd take you for a drive
in my flivver, Miss Ocean, honest, if I could.

Do you know what a flivver is? Probably not, but it doesn't really matter because when Ashbery writes "honest," you can tell he means it with all its attendant longing. In fact, honesty is what Ashbery aims for and what makes him admirable. Sure, he's not telling the whole story of his life for the world to gape at, but what he puts down is all true somehow. In this way, reading an Ashbery poem is also a little bit like being let loose inside a house of mirrors -- things don't always make sense on the surface, but on some gut level, you know you're still looking at yourself, which is about as much as you can hope for. As the poet himself writes:

We should all be so lucky as to get hit by the meteor
of an idea once in our lives. It would save a lot of hand-wringing
and bells tolling in the undersea cathedral,
a noise to drive one mad, past the brink of human decency.
Please don't tell me it all adds up in the end. I'm sick of that one.

Welcome to the fun house.