The Green Party may be a few million dollars richer after Election Day, but what cold comfort that will be if Bush is our next president. 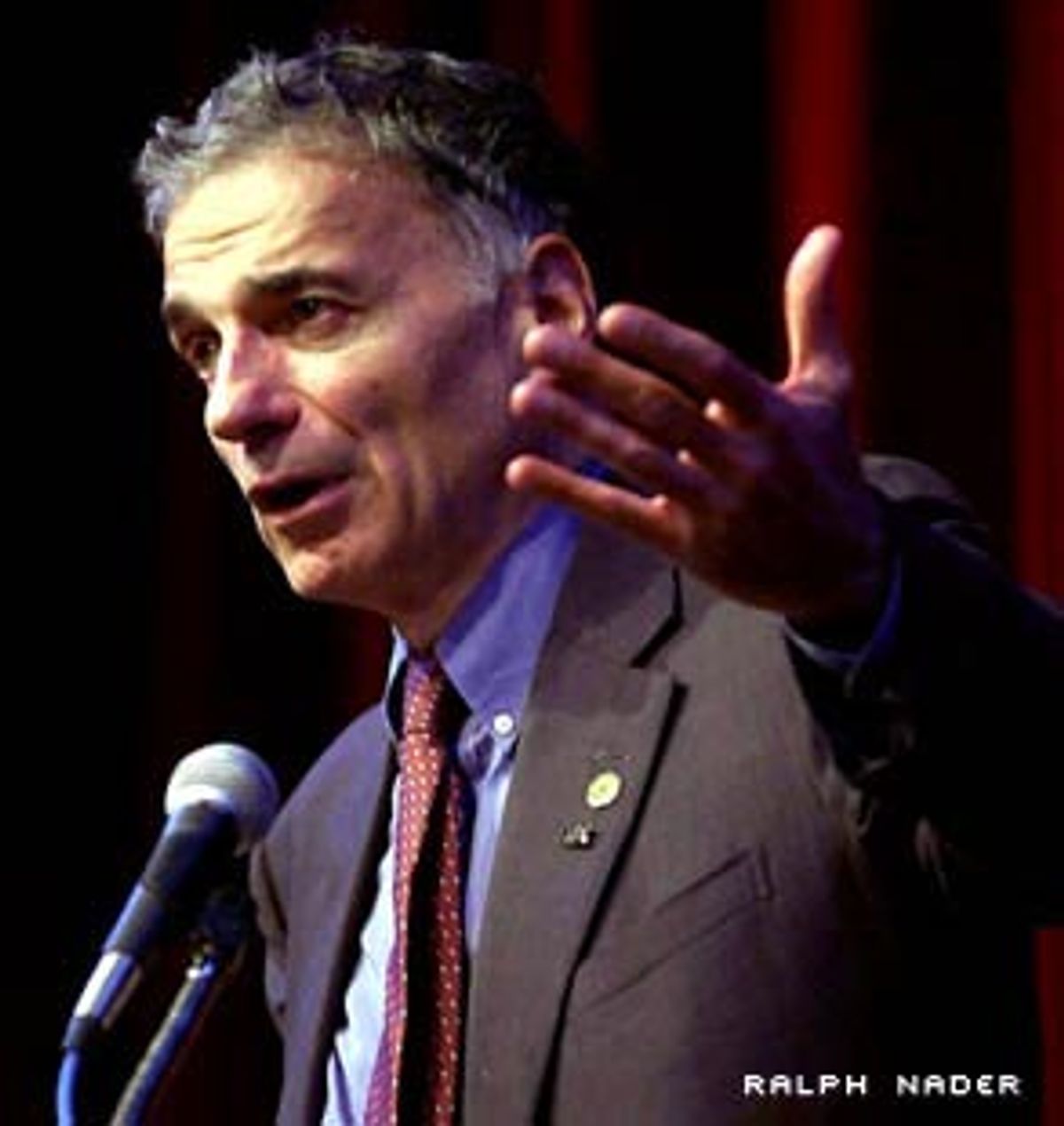 Whether they are disingenuous or simply confused, Ralph Nader and his supporters in the electoral marketplace are perpetrating one of the oldest forms of consumer deception, known as bait-and-switch. They are urging voters to cast their presidential ballots for the Green Party candidate, while offering reassurances that Al Gore will defeat George W. Bush.

With the most recent polls showing that Nader could siphon enough support from Gore to cost the Democrat such crucial states as Oregon, Washington, Michigan, Minnesota, New Mexico, Wisconsin, Florida and Pennsylvania -- easily enough electoral votes to ensure a Republican victory -- those seductive assurances are sounding suspiciously hollow.

What naive voters may well face on the morning after Election Day is a disaster that hands control of both the White House and Congress to Republican conservatives, without even providing the dubious consolation of a future multimillion-dollar subsidy to the Greens. And if Nader does achieve his desired 5 percent threshold of the total popular vote, that will mean rewarding the Green Party with a federally funded bonanza for its ruinous effect on this election. (That's one check that President George W. Bush would no doubt be delighted to sign.)

Just how much a Republican victory would trouble Nader and his acolytes has never been clear. The consumer advocate, like many of his prominent backers, has talked out of both sides of his mouth about this disturbing prospect. Several months ago, Nader indignantly denied a quote attributed to him by Robert F. Kennedy Jr., the environmental advocate and Gore supporter, to the effect that the Green maverick would actually prefer a Bush victory. But the editors of Outside magazine cited a transcript of an interview with Nader showing he had said just that in an unguarded moment.

Obviously Nader can't afford to encourage the perception that he is consciously helping Bush, no matter how predictable the result of his endeavors may be. Still, in his quest for vindication (and federal funding) he seems well aware of which voting bloc he can attract, and has mounted a much fiercer rhetorical attack on Gore than on Bush. Whenever pressed about whether he risks being a "spoiler," he quickly retreats into mushy utopianism.

After an Oct. 22 rally in Northern California, for example, Nader sounded as if he had rejected reality, telling reporters for the San Francisco Chronicle: "I want to defeat [Gore]. I want to defeat Bush. I want to take more votes than I can possibly dream of."

Of such mindless dreams are nightmares made.

In their more sober moments, Nader and his supporters have tried to reassure the fearful that almost everybody can have it both ways -- casting a vote of "conscience" for him but getting a Gore victory anyway. If that sounds illogical coming from a candidate who simultaneously proclaims that there is "no difference" between Democrats and Republicans, it is only a sad signal that Nader is becoming the kind of public figure he affects to despise; that is, a politician who will say anything to win votes.

The rationalizations emanating from Nader headquarters change shape from week to week, conforming to the latest shifts in a volatile national contest. Not long ago, Nader strategist Steve Cobble wrote an essay for Tompaine.com promising voters that in "90 percent of the states," they could vote Green without worrying about forfeiting the White House to Bush because their electoral votes had been predetermined.

Cobble soothingly insisted that even if Nader doubled his current percentage in key contested states, Gore would still take Florida, Minnesota, New Mexico, Oregon, Pennsylvania and Washington, losing only Wisconsin to Bush, and win the election. Such fuzzy math doesn't comport with current estimates by expert analysts in any of those states -- or for that matter with common sense, since many of the "battleground" states are up for grabs two weeks before Election Day.

Perhaps in response to the disquieting trends of late October, Cobble somewhat hastily rearranged his argument. Last week, the Nader advisor told the Village Voice that his candidate is in fact damaging to Bush rather than Gore, because most Green votes are coming from those who backed Ross Perot in 1992 and 1996. According to the Voice, Cobble now argues that "without the option of casting a ballot for Nader, Perot backers would go for Shrub."

Yet if Nader is truly taking most of his votes from Bush -- or won't draw enough votes from Gore to affect the electoral result anyway -- then how can he claim that his party will serve as a ferocious "watchdog" against a Democratic sellout? And if Gore is really no different from Bush, then why strain to convince voters that they can vote for Nader and still watch Gore be inaugurated next January?

It would be foolish to expect rigorous logic to affect the votes of Nader's most ardent backers, for whom the election has become more of an existential statement than a political decision. Dan Perkins, the witty cartoonist known as Tom Tomorrow, says that voting for Nader means "registering the fact that you exist." The film director Michael Moore warns college kids that if they don't vote their Green conscience, they'll be doomed to "miserable lives, lousy jobs and shitty relationships. You'll be miserable and then your life will be over."

Moore also coolly tells students not to fret about another Bush presidency because George W. "is too stupid, and the American people are too smart, to allow that to happen." That's comfortable rhetoric for a populist who lives in a Fifth Avenue penthouse, like Moore, or another who owns millions of dollars worth of tech stock, like Nader -- neither of whom will suffer much regardless of who wins the presidency.

But what if, as recent polling data so plainly suggests, American voters aren't "too smart" to elect Bush? What if they not only elect Bush but keep Tom DeLay, Dick Armey and Trent Lott in charge on Capitol Hill? The damage to Social Security, Medicare, tax fairness, consumer protection, equality of opportunity for women and minorities, labor rights, occupational safety, the natural environment, judicial integrity, international human rights and nearly every other cause that Naderites supposedly hold dear will be incalculable.

At that point, it will be cold comfort indeed if Ralph and his fellow purists have a few million bucks more to play around with when the next election comes.