The Democratic National Committee shoots -- and scores -- in an attack on Bush's record. Too little, too late? 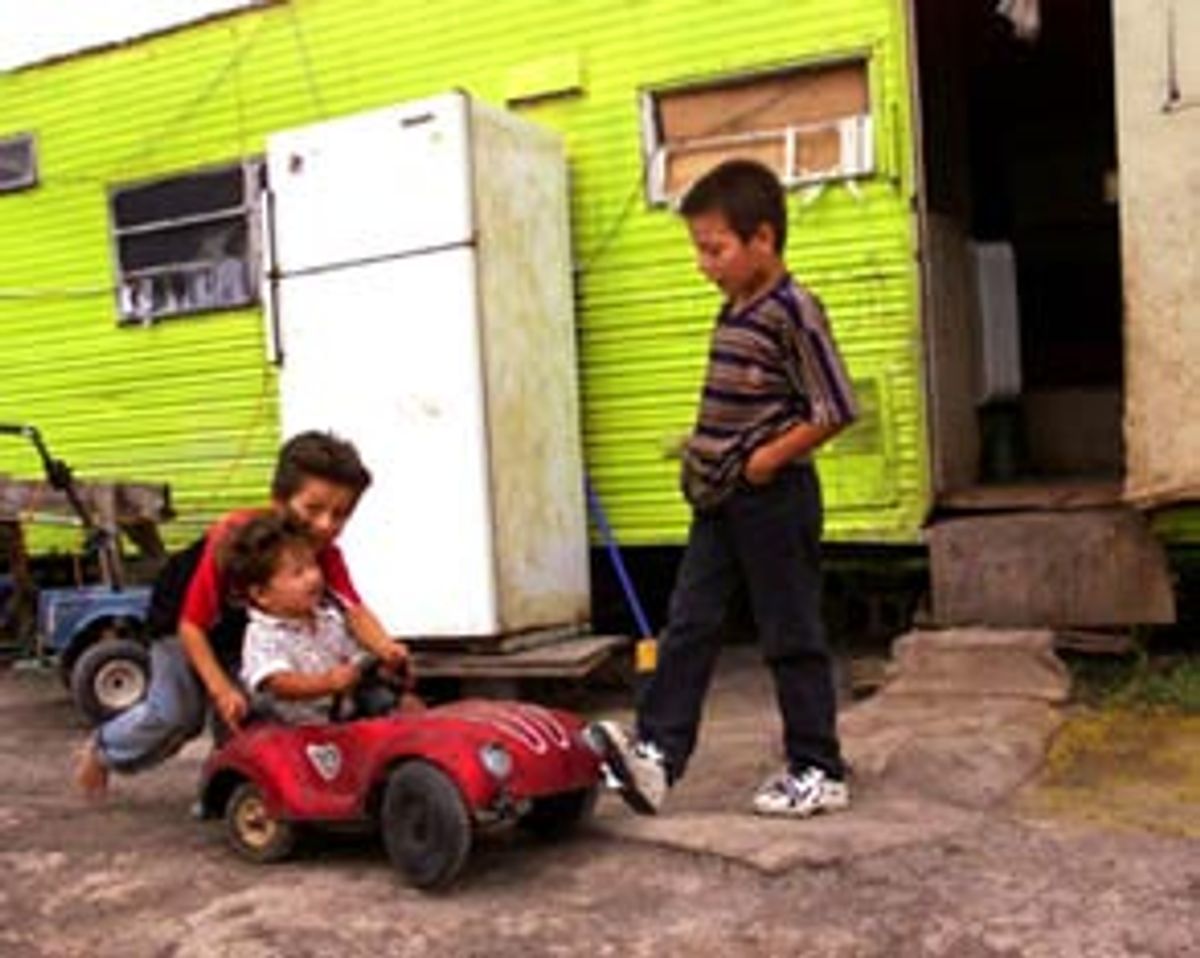 If the voters are turned off by this year's presidential contest, they have a lot of sympathy from those in advertising. According to Salon's political ad panel, this presidential race has been a big zero as far as advertising is concerned. For months, they've been exasperated, irritated and bored by the commercial efforts aimed at selling George W. Bush and Al Gore to the American public.

Until now. The Democratic National Committee's 10-minute videos about Bush's record as Texas governor have finally made the majority of our panel sit up and say, "Wow!" The four separate short films covering education, the environment, healthcare and the poverty stricken "colonia" border communities in Texas all earned raves. Is this video the beginning of the end of Bush's run, or a nice piece of work on Gore's behalf that will prove too little, too late?

"Texans in their own words: Colonias"
RealPlayer

"Texans in their own words: Environment"
RealPlayer

"Texans in their own words: Education"
RealPlayer

"Texans in their own words: Health Care"
RealPlayer

I think these are surprisingly effective. Simply by taking W.'s own words of rhetoric and playing them against examples of him ignoring the very values and promises of his campaign, the DNC has succeeded in showing him to be just another double-talking politician.

I would, however, challenge them on a couple of points. First I don't believe all these Texas problems are solely Bush's fault. I'm certain the slums of colonia and the belching chemical stacks of Houston were there long before young George got the keys to the governor's mansion, but apparently he's done nothing to help either situation during his time in office.

But the bigger problem with these ads is that they dare to move outside the sound bite, hyperbole-driven format of everything else voters have been exposed to in this campaign. Don't get me wrong, I'm thrilled to finally see someone taking a more thoughtful, intelligent approach to challenging the claims of their opponent, but in many ways these seem more like infomercials. I truly wonder if people will sit and listen to these stories from the folks who've been governed by George Bush or if they'll just click off to a "Friends" rerun.

I think the DNC has finally made [an effective video]. But is it too little, too late?

Tom Dixon is creative director and partner at Meyer & Wallis in Milwaukee.

Boy, it's times like this I really wish I were an avowed Democrat or Republican, so I could either defend or dispute the video. On one hand, it's pretty powerful material. On the other hand, it's a simple formula for creating the desired spin: testimonials from the dissatisfied. I am curious to see the response from the Republicans.

At the very least, how about a similar piece on Gore's misdirected priorities from his Tennessee days: poignant testimonials from disenfranchised moonshiners ... underpaid, over-splintered DollyWorld cloggers ... and starving, out-of-work dentists. (I'm originally from Tennessee. So I can say that kind of stuff.)

Should be an interesting final lap coming up.

Jonathan Foreman is a film critic for the New York Post and a frequent contributor to Salon.

These [videos] -- all of them a bit long and boring -- seem designed not to convince independent voters but to shore up the convictions of Democrats who may be faltering in their dedication to Al Gore. The only real exception is the "Environment" film. While the cancer-cluster claim could be tendentious, the woman being interviewed seemed like a real person with real fears. And the shots of smog over a city -- Houston? -- are pretty devastating. I did wonder, though, why no one quoted explicitly blamed the pollution on the governor's ties to the energy business.

Of course, one of the problems that has bedeviled recent Democratic political advertising is the inability of those who make the ads to imagine themselves in the world of people who aren't convinced liberals. You can see this most clearly in the "Colonias" and "Education" segments.

The first is accompanied by corny guitar music like an NPR feature and seems blissfully unaware that many voters are unlikely to be all that appalled by conditions in immigrant colonias that have sprung up on our side of the Mexican border. Even if they're particularly pro-immigrant, they may well know that Texas faces unique problems in the settlement of folks streaming across the border, and you can see from the [video] itself that the colonias are hardly the equivalent of the shantytowns on the other side of the Rio Grande ...

The "Education" short is the least effective of the four. Unlike the rest, it isn't delivered by an "ordinary person," but mostly by a schoolteacher with union banners behind her. And you get a strong sense of special-interest pleading especially when you hear a voice declaim against the use of non-accredited teachers. Many voters not only know that teachers unions have campaigned vigorously against education reforms popular with parents, they're also not terrified of the idea that retired businesspeople or students fresh out of Ivy League schools might be teaching their kids instead of a barely literate hack with an education degree.

These are actually the best pieces of communication I've seen so far in this schlock-fest we call presidential campaign advertising 2000. Most of the ads I've critiqued have had a liberal layering of advertising "technique" schmeared across them in a cheesy swipe. Heavy duty "calls to action" -- "Vote Gore for Freedom," "Vote Bush for Your Future" and other propagandist sayings coat the true messages in a thick veneer. The viewer is left with an "I don't know who to believe" attitude.

These pieces of communication ring of truth. There's very little advertising agency getting in the way of the pure and simple words of the people. The words speak for themselves, from real, believable citizens. The result of these ads is way more potent than previous efforts. The Gore voter is left with a sense of surety at a time they might be swaying, and the Bush voter is left with a sense of betrayal. Chalk one up for Gore, I'd say.

This election is down to the wire and the DNC is not taking any chances or prisoners. This is some powerful stuff. Each of these spots comes off as a mini-documentary. The set up or promise in George W.'s own words and then the reality with some real down-home Texas folks to turn him into a liar. This is the Willie Horton of the new century. Is it fair? Probably not. Will it be effective? My guess is yes.

Richard Blow is the former executive editor of George magazine and is working on a book about John F. Kennedy Jr.

These four films constitute the most powerful case Al Gore has yet made against George W. Bush. They hit him hard on issues, but more importantly, they undermine his credibility, his character, the whole idea that just because Bush seems like a nice guy, he is compassionate. How compassionate can you be if you haven't visited a colonia even once in six years?

We've seen this "I know what you did in Texas" strategy before: George Bush used it with devastating effectiveness against Michael Dukakis with his ads about pollution in Boston Harbor and Massachusetts' weekend furlough program. It's effective.

There's just one problem. This line of attack takes time to develop, and time is one thing Gore doesn't have. He's about six months too late to make this smear stick. I'm betting Gore knows this, too -- that's why these are longer videos, not ads. Frankly, they get a little boring at this length, and you have to wonder who would watch them.

My hunch is that these videos are meant to serve two purposes: to make the case against Bush just as television stations and editorial boards are considering their endorsements; and to rally key elements of Gore's base -- Latinos, environmentalists (who might be pondering Nader), teachers and women.

This is nitty-gritty politicking, the kind that you get in the last two weeks of a campaign. Too bad for Gore he didn't try it sooner.

Mark Frisk is a senior producer at Ogilvy & Mather in New York.

I had heard that this 10-minute video, evidently the centerpiece of a coordinated national campaign, was coming down the pike, and I'm pleasantly surprised at its lack of stridency. The tone is measured, not alarmist. The facts, however, come through clearly, and they are damning.

Dividing the thing into four easy-to-digest chunks, each one devoted to a specific aspect of Bush's record, is smart, as is leading off each segment with video of the governor addressing that particular aspect. (This is, after all, "Texans in Their Own Words.") The producers let Bush sink his own ship. Note that they haven't made use of any of the countless Bush gaffes we've heard in the last several months. That would have been too easy and probably would have backfired. I couldn't help but notice, though, the little "heh" that escapes his lips right after he says, "I'm for clean air and clean water." Very telling.

Helping the Good Ship Bush sink are the real people, real Texans, speaking evenly and calmly about what their governor has done, or hasn't done, for them and their fellow residents lately. Their composure is admirable, almost moving, and it enhances the video's effectiveness dramatically. Showing them crying or mad or visibly upset would have distracted viewers from the basic, gut-wrenching issues at hand. These real people and their matter-of-fact manner are the payoff, and I think they've been used to great effect.

Note also that the DNC's candidate himself is nowhere to be seen. This is also smart. We all know the trouble Gore's gotten in for telling stories about real people. It's time to let the people (real Texans, to boot) speak for themselves.

This video strikes me as a "clean" hit. It seems somehow, in some small way, to be above the fray. Of course, Republicans probably won't see it that way. I suspect that the Democratic governors and members of the House who are taking part in this coordinated campaign, not to mention Gore himself, will not be so delicate and calm in hammering on these issues. It's up to them to really drive things home. But these real Texans have gotten things off to an eloquent and elegant start.

I have no idea how the DNC plans to get this material in front of people, other than releasing it at press conferences and media events, so I can't speak to its ultimate effectiveness. A quibble: The woman who speaks about pollution? I probably wouldn't have shown her climbing into an SUV. That visual seems just a little bit off.