Mac OS X: As Windows as you wanna be

Apple's new operating system has learned a few tricks from Microsoft -- and added some neat features of its own. 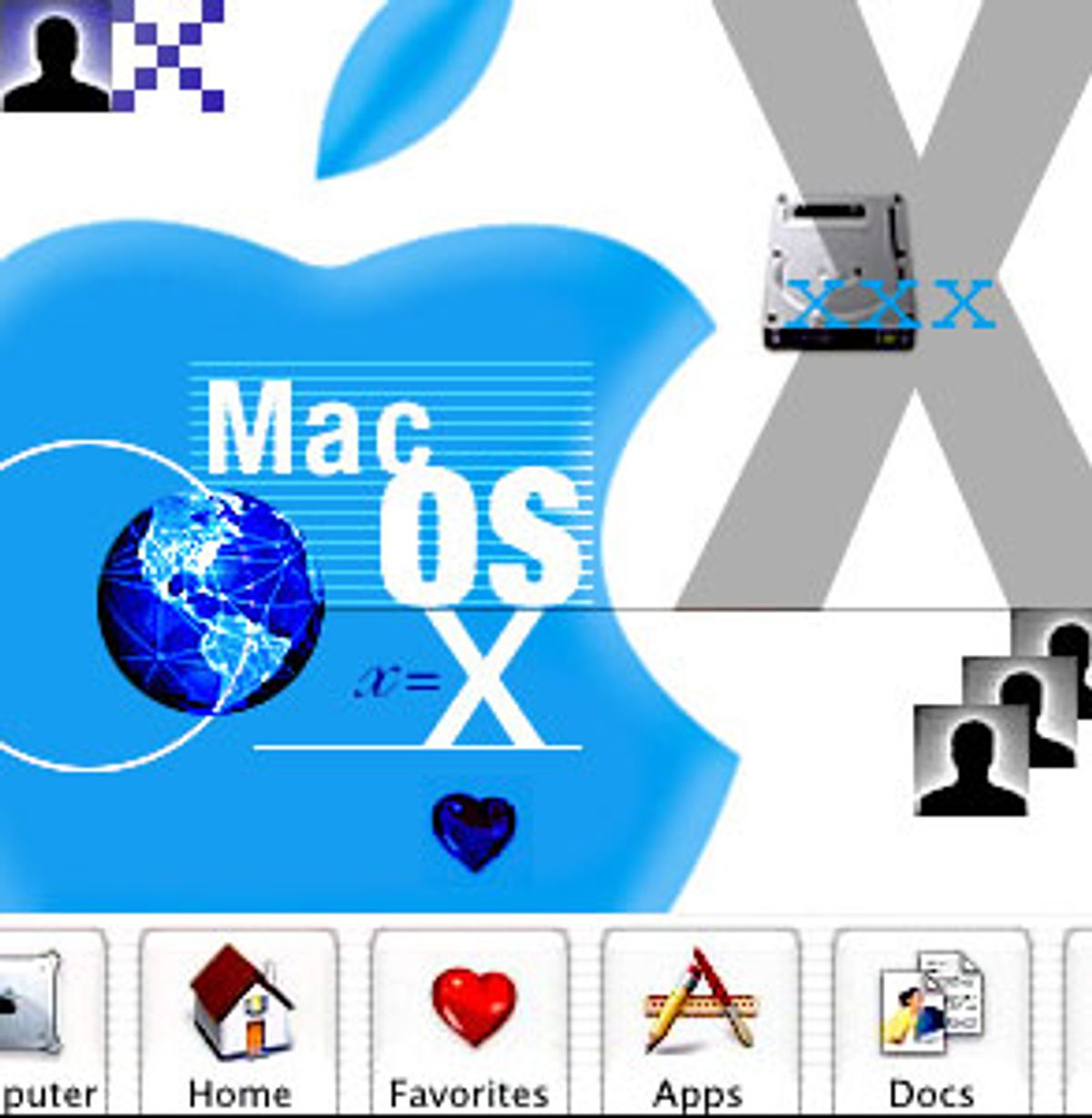 When you've been using an operating system for a dozen years, and someone goes and revises the whole thing from top to bottom, it's almost a given you will be disgruntled. Naturally, then, when I loaded up my beta version of Apple's Mac OS X, my first response was utter annoyance: Where on earth had the menu gone, hiding that oh-so-useful calculator that was just one click away? Or the beloved little desktop icon for my hard drive, which used to nestle so securely in a top corner of my screen, promising that everything I'd ever need would be found within its two-dimensional confines?

But these are just the wheezings of a woman fixed in her ways; change, I must recall, is good. And certainly the Apple OS has been crying out for an overhaul for years. As a Mac-identified computer user first and foremost (though I have crossed over to the dark side in recent years, and now consider myself ambi-computerous), a creeping suspicion that perhaps the Mac OS could benefit from being a little bit more like Windows has long been my secret shame. OK, Apple would never give me a two-button mouse, but couldn't it at least do something to make it easier to access all my open documents?

Fortunately, the user interface in the beta version of Mac OS X -- now available for $29.95 -- proves that Apple has been thinking in a Windows kind of way. It has also been thinking in a Unix kind of way, incorporating the open-source BSD operating system into the core of its software. But that's something that nongeeks like myself can hear and just smile about, knowing that it's probably a good thing, before promptly forgetting about its existence.

For me, the important elements of an operating system are the user interface, the navigation system and (more vaguely) the hope that the computer will do more things in less time. On these levels, despite the aforementioned minor disgruntlements, OS X succeeds. The system looks great and offers a million new ways to find the things you need. And judged on a purely observational level, it does indeed seem to be much better at allocating memory and multitasking. That doesn't mean that the system is perfect; keeping in mind that what I tested was only a beta version of the software, and thus by definition prone to bugs and glitches, there are still some places in the interface and navigation where Apple has missed the boat. More on that later.

OS X (with an interface called "Aqua") is the first major overhaul Apple has given its Macintosh operating system in more than 16 years. Although successive operating systems in the years since the first Macintosh have added more gadgets and widgets -- nicer tool bars and better graphics, the Sherlock search and so on -- the main navigational and organizational systems have never truly been revised. That's no longer the case.

The first thing you'll notice with the new desktop is a marvelous little thing called the "dock," a small, semitranslucent tool bar that perches at the bottom of the desktop and never disappears (unless you want it to). In the dock are icons for all your favorite applications, open documents, basic system preferences and search functions. It is difficult to exaggerate how useful this little navigational bar is -- much like the Windows tool bar that tracks open documents, the dock lets you know what windows are open and which applications are running, helps you access everything with one click and even tells you the number of e-mail messages currently awaiting you in your mailbox. It is probably the greatest thing to come to the Mac interface since the mouse.

The new finder, now a distinct entity of its own, is also a nice addition. Clicking on "desktop" in the dock pops up a window that helps you navigate your entire computer and hard drive. With a few pre-programmed buttons (favorites, apps, docs) at the top of the box, the finder also includes three different ways to browse your hard drive -- via the traditional list view, pull-down navigational menus (à la Windows) and a nifty column view that does away with multiwindow navigation and instead shows the contents of a folder in an adjacent column of the same window.

Then there's the graphic design, entirely overhauled to match the Aqua theme of watery liquid transparency. Windows and icons are semitranslucent, with soft gray-blue ridges and lines; buttons look like shiny round blobs of jello. Even the cursor has become a spinning color wheel instead of a miniature clock face. All the icons are now detailed three-dimensional pictures: The search icon is a detective hat with magnifying glass; the e-mail icon is a postmarked stamp; the trash can is a steel mesh designer version, similar to one you might find at Crate & Barrel. (And in case you're confused by those icons in the dock, a simple mouse-over tells you what programs they represent.) If you hate cutesy icons you'll loathe these, as they seem to have been designed for newbies who need all the in-your-face clarity they can get; overall, however, the new look is calming and simple.

The entire system has a graceful fluidity worthy of the Bolshoi Ballet -- from the wraithlike way open applications are "sucked" into the dock when you minimize their windows to the rippling visual effect that occurs as you roll your mouse over icons in the dock. The default font is a graceful Helvetica with a soft blur reminiscent of the printed page, and windows have subtle gray drop shadows that (as Steven Johnson noted in Feed) change size depending on which window is at the front of your screen. The system shows the kind of elegant attention to detail that has become a hallmark of the new Steve Jobs regime.

What else is great? The graphics, which are stunning -- almost as good as, or better than, a television broadcast; the multitasking capabilities, allowing schizophrenic types to do 10 things at once without crashing the system; and the memory allocation, which seems to have banished those "out of memory" dialogue boxes once and for all. OS X is also screamingly fast compared with older Mac operating systems.

There are also some flaws. Since only a few applications are available for OS X, you have to simultaneously boot up your "Classic" (OS 9) operating system for your old applications to work. This is a slow and glitch-ridden process. Coaxing non-OS X applications (especially Net-related ones) to work can be utterly frustrating; one day my Real Player started up with no problems when I downloaded a movie from the Web, but the next day the same request generated a variety of error messages. Why? I have no idea. OS X is prone to freezes, too, and your cursor will occasionally get stuck "thinking" -- although that may just be a bug in the beta version.

And, unfortunately, despite all the different ways to navigate your documents and applications, it's somehow more difficult to find what you're looking for. Where once everything defaulted to the desktop or else appeared in a folder in the top level of your hard drive, now downloads and applications are routed into mysterious Unix-like folders such as "users" or "home directory." You have to reset your preferences to route downloads to your desktop, and even then there's an odd lag time between the download and the time the document appears on your desktop. Some of the traditional key commands from the old operating system have been changed, too -- apple/N, for example, no longer opens a new folder; instead, it opens a new finder window (you have to hit shift/apple/N for the folder). And everything you used to look for under the Apple menu is now buried somewhere inside the finder.

Even a hoary traditionalist like me eventually converts, however, and after four days of fiddling with OS X I finally had the new navigation system down. (I wouldn't say that I liked it better than my beloved old desktop, but I had learned to appreciate its benefits.) I'd accepted the loss of the little hard drive icon. I'd mastered the finder. I'd learned to love the translucent floating clock -- analog, natch. (I think I may have seen one just like it for sale at Restoration Hardware, which had replaced the digital clock of old.) And eventually, I even found the calculator.