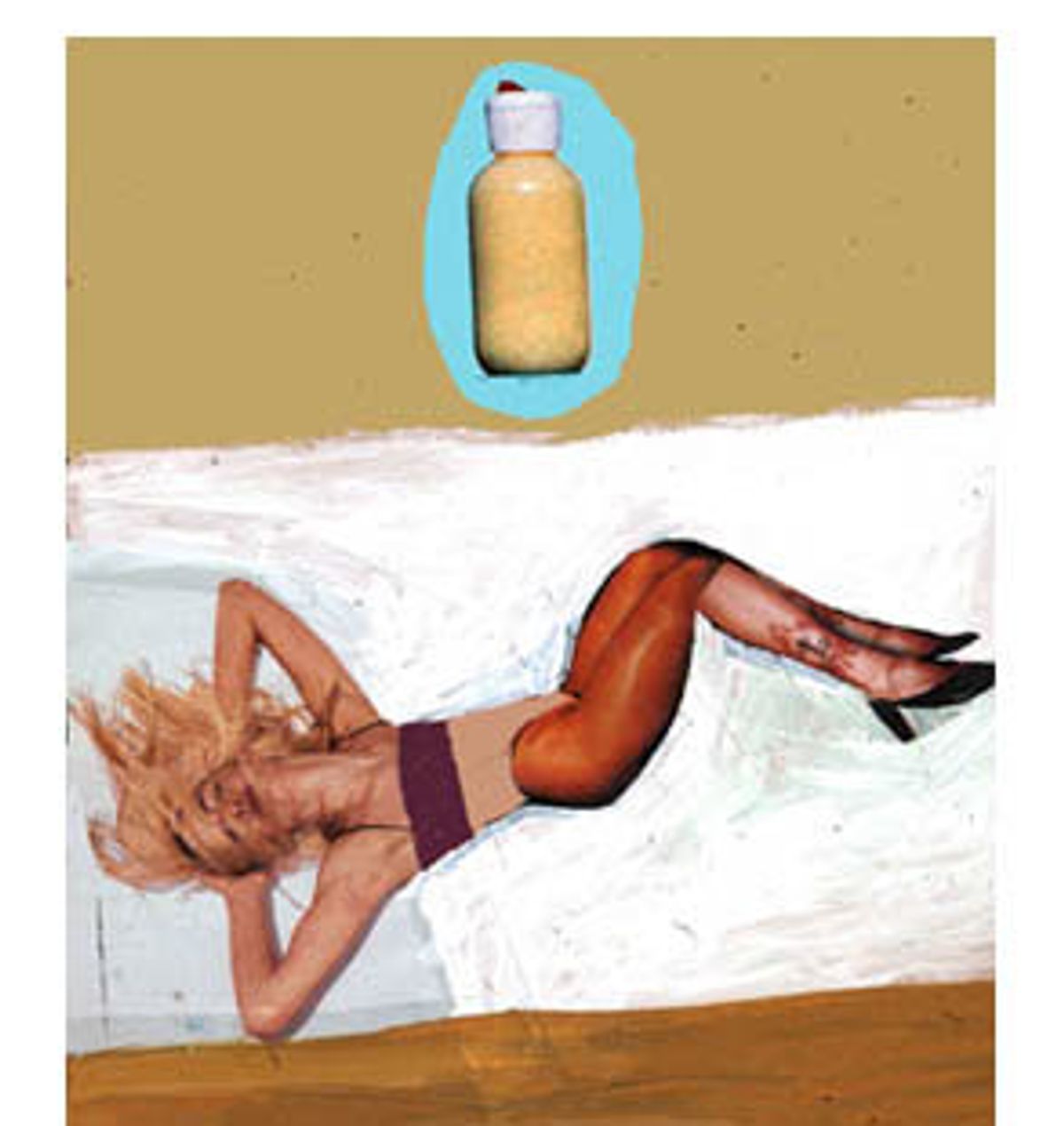 Imagine a gel that women layer on their pudenda that magically swells the area with lustful desire. Blood engorges the labia, the clitoris stiffens excitedly and lubrication (the historic task of foreplay) is swiftly unleashed by the moistening cream. A tiny dollop rubbed in softly and -- shazam! -- the female tingles, itching with passion.

Such a thing exists. Many over-the-counter sex creams that speed up women's "libida" are already available, and two biopharmaceutical companies are aching to get their new love lotions approved by the Food and Drug Administration. Their medical and financial ambition is to garner the products massive Viagra-esque popularity with women.

Femprox, developed by NexMed of New Jersey, seems to be leading the pack of climax contenders in the current race for an FDA-approved vaginal jump-start jelly. The company's manager of corporate affairs, Deborah Carty, says that testing of its product is in Phase 2 in China. She anticipates that the final leap over the Phase 3 hurdle will begin by the end of 2001, "and if the results are positive, it [Femprox] will go on the marketplace, pending FDA concurrence." (Phase 1 is an initial test for safety to rule out side effects not caught in animal studies; Phase 2 is an efficacy trial, usually using a small number of people; Phase 3 is a larger test that usually lasts a year and is the final phase before seeking FDA marketing approval.)

NexMed's aphrodisiac ointment garnered ecstatic acclaim in its Phase 1 tests (unveiled in August 1999), when eight women at the Robert Wood Johnson Medical School in New Brunswick, N.J., praised its pleasure potential after doses were dabbed on their genitalia. Clinical data gathered by machine -- electrocardiography and photoplethysmography (a technique that monitors vaginal blood flow) -- backed up their testimony with scientific statistics.

The eight invigorated volunteers were all sufferers of female sexual dysfunction and/or female sexual arousal disorder, maladies that were magnificently alleviated by the libidinous goo. Internal research by NexMed, says Carty, has "estimated that FSAD may affect 47 million American women." This vast number of dissatisfied women includes 25 percent who were pre-menopausal and 75 percent who were post-menopausal, with symptoms that included absence of sexual desire, lack of lubrication, decreased blood flow to the vagina and inability to attain orgasm.

The erogenous ingredient in Femprox is alprostadil, described by Carty as "the chemical name for prostaglandin E1, a natural substance found in the human body." Alprostadil operates as a potent vasodilator, enhancing blood flow to anatomical regions by widening the major arterial vessels.

Impotent male readers are probably wondering by now: Would this work on my wiener? The answer is yes, absolutely. Alprostadil is the same element that props up Upjohn's Caverject injectable stiffener, and it's the meat-toughening medicine in Muse (a virile intraurethral pill produced by Vivus). It's also the hardening tool in NexMed's male erectile dysfunction product, Alprox-TD, which is neck and neck with Femprox in the company's testing contest.

Alprostadil cream got an additional boost in credibility at the 95th annual meeting of the American Urological Association in Atlanta (April 29-May 5), when Dr. Edgardo Becher of the University of Buenos Aires, Argentina, announced the results of his studies involving 18 women ages 18 to 61. After applying alprostadil to his subjects' clitorises, he measured blood flow -- in 15-minute intervals -- with color duplex ultrasonography equipment. A "rapid vasculating effect" in the perked-up pink nub and surrounding tissue was recorded, and 13 of the subjects maintained that they felt "pleasant" warm sensations.

Why is a lotion being developed for lust in NexMed's laboratories, instead of a pill that could be discreetly popped? The finger application of Femprox's compound -- alprostadil combined with additional skin penetration ingredients -- is lauded as superior to tablets because it offers a "faster response ... reduced side effects ... [and] localized versus systemic reaction." (These assertions can be found on NexMed's product information Web site.)

In the arousing race for FDA approval, Femprox has zipped ahead of its rival Alista (created by Vivus). Alprostadil is also used in Alista, but that product's clinical testing lags approximately two years behind NexMed's solution. Numerous other, non-FDA-approved vaginal ointments are already available, however, and women seem to be in a lather to purchase them.

New York urologist Dr. Jed Kaminetsky offers his walk-in patients a sensual choice: a Viagra-based cream or Dream Cream. Both are available by prescription only, subsequent to an exam. The first concoction incorporates the same sildenafil chemistry as the famous male booster, while Dream Cream enlists L-arginine, an amino acid that is widely used by professional athletes to build muscle mass. (A nonprescription version of Dream Cream is also available through Kaminetsky's Web site.) Kaminetsky advises his customers to apply the topical therapy "20 to 30 minutes before sexual relations ... around the opening of the vagina and the clitoris. You will experience a warm tingling sensation. The effect ... lasts several hours."

Viagra for women in its oral form has been lauded by several researchers (who praise its success with post-menopausal and post-hysterectomy women and those cursed with sexual dissatisfaction related to antidepressant therapy), but Kaminetsky considers the swallowing cure far less effective than his hands-on ointment. He also claims that painful side effects caused by orally taken Viagra -- such as nasal congestion and severe headaches -- are nonexistent with his tubal remedy.

Two topical remedies that Illinois reproductive endocrinologist Dr. Chance Fisher recommends are "a combination of estrogen and male androgen" and "a 2 percent testosterone cream." His hormonal therapy is unlike Viagra, which he says works "directly on contraction and dilation ability of the blood vessels"; rather, its impact is upstairs "in the pituitary gland and brain." The great groin sensation of a heated vagina will be identical, he expects, but with hormones a sweaty crotch can be achieved only after a "complex chain of chemical reactions."

Fisher also asserts that peppermint oil increases sensation. And, according to the doctor, a simple remedy for sexual dysfunction is: "More sex," he suggests. "The more stimulation you get, the more developed and responsive the nerves become." This remedy might seem obtuse and frustrating at first, but anyone who has experienced his or her nipples or anus methodically spring into life after consistent attention can vouch for the integrity of this theory.

On the other side of the issue are many therapists, who see the psychological aspects of this problem as most significant. Sex therapists use counseling skills when they solve sexual problems, and see products like Femprox as shortcuts that threaten both their wallets and their talk-it-out sensibilities. Lilly Tanner, Ph.D., of Miami Beach, Fla., grumbles that "women do better when they're involved in a good relationship than they do when they're putting creams on themselves. It [Femprox] is just a nonsense thing that the pharmaceuticals have come up with."

Steven Braveman (M.A., MFT) of Monterey, Calif., is apparently even more allergic to vaginal ointments. "Ninety-eight percent of pre-orgasmic women can easily have an orgasm after they work through their issues in a behavioral, therapeutic format," he fumes. "Maybe it's trauma at an early age, or a strong religious message that sexuality is evil, or they might be married to a man who is ignorant of female genitalia."

"What I fear," he continues, "what we [sex therapists] are concerned about, is that our society is medicalizing, pathologizing, an emotional or relationship problem. If women buy into the idea that they can just be pharmaceutically treated to enjoy sex, we are essentially turning them into prostitutes so that they will perform on demand. The development of these creams represents a very poor turn of events in the history of our sexuality."

Certainly an eloquent plea by the Californian, but absolutely erroneous, snorts New Yorker Kaminetsky. "That's not true!" he rails when informed of Braveman's statistic that medical intervention is 98 percent unnecessary. "What about post-menopausal women, when their bodies go through hormonal and vascular changes?" Additional physiological causes of FSAD and FSD that the urologist lists on his Web site are "nerve damage, smoking, elevated cholesterol [and] long-distance bicycle riding."

"Some people don't see the big picture," Kaminetsky says, defending his potions. "Even if the problem is psychological, if we can provide a cream that is quickly effective, why should anyone be opposed to that? I'm in the business of helping people."

After Viagra's success, it's clear that any amorous medicine is destined to become a top seller, whether patients decide to use it in conjunction with therapy or as an enhancement they can apply themselves.

Hank Hyena is a former columnist for SF Gate, and a frequent contributor to Salon.