Gore: Bush deserves an F, not an A

The "Texas miracle" is under the spotlight as the GOP candidate defends his education record. 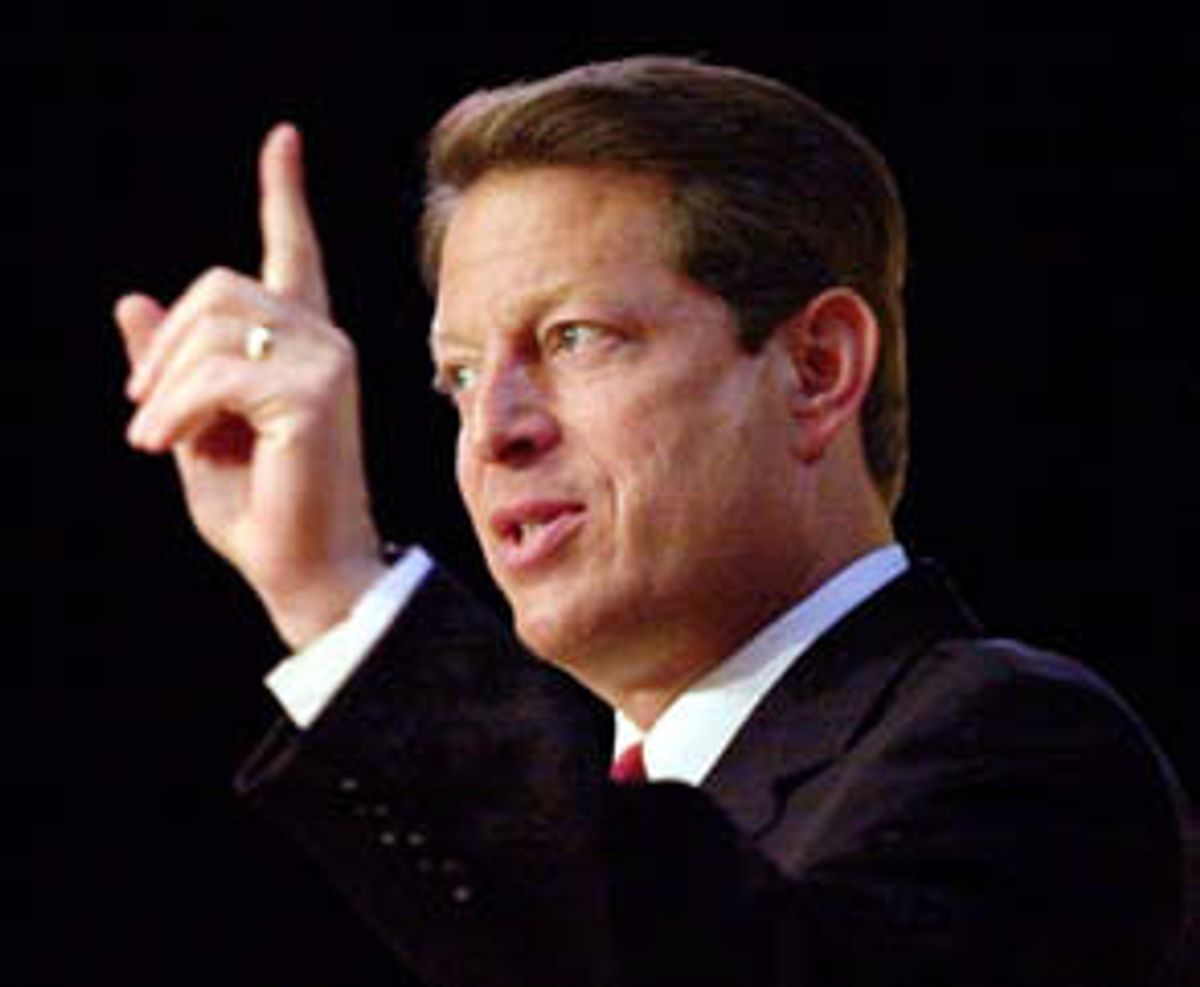 There's an immense book on the stage in the Poag Auditorium at Tennessee State University. It's maybe 10 feet high and 25 feet wide. It looks like a fascinating tome: "Education for All, Prosperity for Life" is its title. "Chapter 1: Smaller Classrooms," the pages read. "Chapter 2: Well-Trained Teachers," etc., etc. If you can't wait until the movie, it turns out that Chapter 6 wraps it all up nicely with "Lifelong Learning."

That's a big book, the Gore education plan, priced at about $110 billion (marked down to $25 billion at Crown), and it's huuuuge onstage here. If the book were to suddenly slam shut it might squash Al Gore like a bug.

As part of his "Big Choices" tour -- which could be subtitled "C'mon now, you're not really going to elect that idiot, are you?" -- Gore has come to talk about his education plan and, more importantly, to try to steal back this traditionally Democratic issue from his rival, Texas Gov. George W. Bush.

Gore starts by taking the advice his mom once wrote out for him before a 1988 Democratic primary debate: "Smile. Relax. Attack." Speaking calmly and with a stately demeanor, Gore slams Bush for taking "shortcuts" in his education policy to the detriment of Texas students. He seems to be trying to conjure up an image of a slacker Bush copying off the exam paper of the brainy kid in his Yale fraternity; in the first minute or so of his speech, he uses the term "shortcuts" four times.

"When it comes to economic policy, there aren't any shortcuts," Gore says, hitting Bush for "cooking the books" and "promising the moon in budget-busting tax cuts for the wealthiest."

Such shortsighted slacker policies, he says, "may sound fine in an election campaign, but it catches up with you. Much worse still, it catches up with our country ... I believe the same is true when it comes to education. If we want all our children to learn and to grow, there aren't any shortcuts."

Gore also hits Bush for providing "more in tax cuts to the wealthiest 90,000 multimillionaires than all" -- pronounced awlll -- "the new investments he has proposed to make in all" -- again, awlll -- "90,000 public schools combined."

He kicks Bush for not supporting his plan for funding 100,000 new teachers, knees him for backing vouchers (which, despite what Bush said in the third presidential debate, his plan does require of states) and tears apart Bush's pledge to increase funding for Pell grants as only applying for freshman year. "A guaranteed college-dropout plan," he calls it.

Gore even gets some assistance from an unusual place: the normally conservative Rand Corp., which on Monday published a report that scuffs up the sheen of the Texas education record Bush loves to tout. Bush has previously cited Rand as an independent group that agrees about the godliness of his work in the Lone Star State. It's unlikely he will anymore.

"I think the 'Texas miracle' is a myth," Stephen Klein, the senior Rand researcher who helped lead the study, told Reuters Tuesday. According to the study the gap in average scores between whites and students of color isn't closing, as Bush has said, but is actually "very large" and "increasing." While the Texas tests show improvements in learning among Texas students beyond what is shown in national tests -- a point pounded home by Bush -- Klein concluded that Texas teachers were preparing their students for the test, but not necessarily teaching them much beyond how to take a test well.

Rand in hand, Gore told the Tennessee crowd all about the report's ominous conclusions.

A succession of press releases issued from the able Bush press team Tuesday and Wednesday revealed a degree of panic about the fact that the campaign was now playing defense. In a Wednesday morning press release titled "Rand Report Refuted," it turned out, amusingly, that the one refuting the study was Bush's senior education advisor, Margaret LaMontagne. It was almost as convincing a refutation as when Tipper Gore assures audiences that her husband is, really, a good guy. Members of the Bush team started doing everything they could to discredit the report.

Another Tuesday press release quoted Rand's David Grissmer, author of the more positive July 25 report, swearing that the "newly released Rand Issue Paper would not have changed anything written or concluded in our Rand Main Report" from July. In yet another release, the Bushies sent out the press release from the July report.

Then they got a bit testy, and in an afternoon release the Bush campaign started to indicate that maybe Bush didn't actually "welcome" the "renewed focus" after all, referring to the latest report as an "issue paper." Later that day, Bush spokesman Karen Hughes told reporters the campaign questioned the report's "highly suspicious timing, a couple of weeks before the election."

Complaining that Klein had in January "challenged the gains in student test scores in testimony before the National Academy of Sciences," and taken his research materials from the Texas Education Agency's Web site, Bush spokesman Bartlett said in a written statement that "the fact that Mr. Klien [sic] did not seek or obtain a complete set of test data from the Texas Education Agency and criticized student achievement in Texas before his research began diminishes the validity and credibility of his opinion paper."

According to Amy Wilkins, a policy analyst with the Education Trust, a nonpartisan think tank, the Bush team is right to refute the new Rand study.

Arguing that Klein's paper "misses the big picture," Wilkins says: "Minority kids are doing phenomenally well in Texas. If black fourth-graders were doing as well in math across the country as they are in Texas, we could cut the achievement gap between black and white students by a third." Teaching to the test "means different things to different people," she says, "but if they're teaching a curriculum that is aligned with the testing, what's wrong with that?"

Gore's plan might be slightly better than Bush's, Wilkins says, though a perfect education plan would combine the substantial cash and new-teacher testing found in Gore's plan with the annual student testing, third grade through eighth, found in Bush's proposal. She faults Gore's plan for its lack of focus. "It's a mile wide and an inch deep," she says, "a little here, a little there. And I worry that a plan that diffuse runs a very serious risk of not achieving anything." Bush's plan, she says, doesn't make nearly enough of an investment and contains a voucher proposal that, in a best-case scenario, would help only a limited number of kids.

Surprisingly, Wilkins is not necessarily overjoyed with the prominence of her issue on the campaign trail. "It's a little wild," she says. "And it causes us to worry. Educational policies should be based on what kids need, and not what adults want. The more that the issue is a political football, the greater the chance that it will dissolve into appeasing the desires of adults."