Why you should root for the Mets 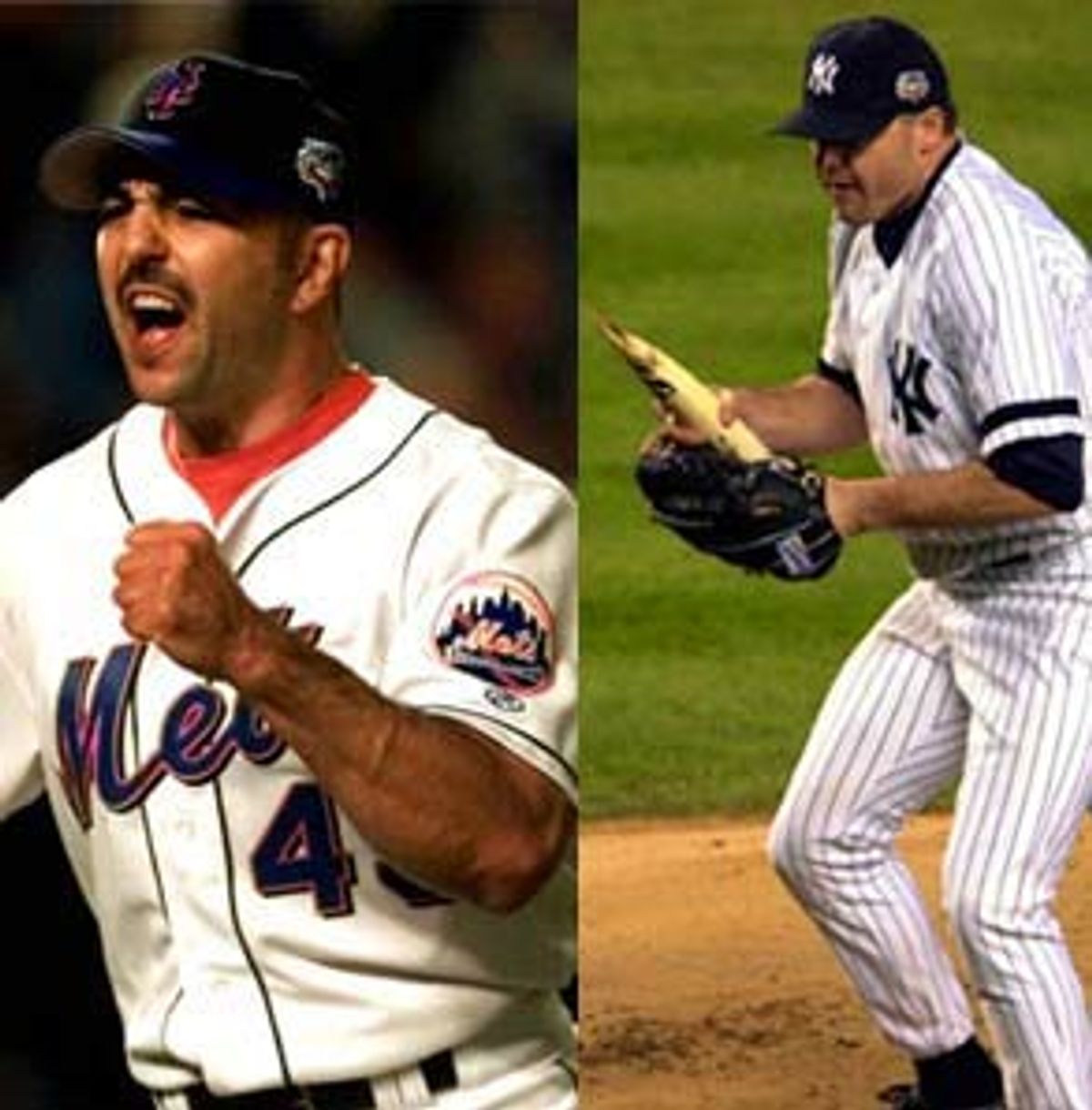 Before the New York Mets won Game 3 of the World Series Tuesday night, all those prissy, pinstriped Yankees fans were trying to outgloat one other. But the Mets' first Series victory was more than just a win. It demolished the Yankees' much-hyped 14-game World Series winning streak. It gave diehard John Franco his first World Series win. And it showed why we root for the Mets, our clutch kings -- and why the rest of the nation should, too.

A metaphor might be useful in explaining why, in this clash of the New York titans, the Mets should be your team. Imagine if every Friday night, a major television network broadcast a fight to the death between a well-trained fighter and a gigantic titanium robot with chainsaws for arms. Everyone would watch, and for a while, some people might well root for the robot. Week after week, people would talk about the robot with awe: He can't lose! He's amazing! He's unstoppable! He's a JUGGERNAUT! But after, say, I don't know, a decade of this nonsense, I think everyone would be rooting for the fighter.

Put another way, Yankees fans need to watch "Rocky IV" again and take notes. Damn, even the Russians knew when to quit.

The Yankees are a machine, fueled by cash and controlled by robber barons. The Mets are the team for real New Yorkers. Even down 3-1, they're undaunted, and so are their fans. We still believe.

Let's start with a comparison of two of their most talked-about pitchers.

New Yorker John Franco is doin' it for his beloved dad, whose career for the Department of Sanitation is now a part of World Series lore. That orange Sanitation shirt beneath his jersey? That's for real. That's touching. As a child, he financed his trips to Shea Stadium by collecting discount coupons off Borden milk cartons.

Texan Roger Clemens is doin' it for ... who? George W. Bush? Davy Crockett? The Lone Star State's proudest son is ducking questions about the bat-tossing incident until the Series is over. What a fuckin' wuss. Clemens won't show his ass on the field at Shea, and Joe Torre has allowed him to hide behind the designated hitter rule. What a loser. He even tried to blame July's Piazza-beaning on some imaginary periodic lack of control. ("Funny, he's not wild outside," said Alex Rodriguez of the Seattle Mariners.)

Worst of all, Clemens is from Texas. What cruel twist of fate allowed this violent knuckle-dragger to escape that state's death mill? Why isn't he the next retard to be denied clemency by Dubya? Shouldn't there have been a fateful night two decades ago involving a couple dozen Coors and a misperceived homosexual advance followed by a pickup truck chase outside the Cowpoke Tit-A-Roo in Lubbock?

A $50,000 fine isn't nearly enough. He should be arrested. I'll tell you this much: Clemens wouldn't be a pitcher in the clink. He may be cocky up against Bubba Trammell, but let's see that attitude when he's trammeled by a lineup of Bubbas.

Look, it's simple: If the first four games of this series have taught baseball fans anything, it's that the Mets are much cooler than the Yankees; thus, Mets fans are cooler than Yankee fans. And if it's true that the fans bear some responsibility for the Mets win Tuesday night, then it's probably helpful to take a look at who is a Mets fan, and who is a Yankees fan.

Ben Stiller is a Mets fan, as is Jon Stewart. "The Man Show's" Jimmy Kimmel is as well. Ditto Frank McCourt.

Don't forget Tim Robbins and Susan Sarandon. No celebrities have been more willing to put their fame on the line for the sake of justice than these two. From getting arrested in protest of the NYPD's tactics, to helping make sure Ralph Nader sold out Madison Square Garden two weeks ago, New York's progressive It couple are right where their conscience tells them to be -- and they're behind the Mets.

The Mets attract, on average, a better, more real, less pretentious group of fans. Met fandom helps to nurture a sense of humor. You gotta be able to take the bad with the good. Mets fans understand loss. That builds character. I'll bet Cubs fans are the coolest people on the planet (if a touch quixotic).

That's why real New Yorkers root for the Mets. Their excellence in spite of their imperfection (not to mention their grace in the face of Clemens and John Rocker) is much more compelling than the Yankees' cookie-cutter domination.

It's been said that rooting for the Yankees is like rooting for Microsoft. Here's proof: Microsoft Word recognizes the word "Yankees." It does not recognize the word "Mets."

Puffy Combs and Bryant Gumbel are Yankees fans. So are Barbara Walters and Calista Flockhart.

I could list a thousand more pressing reasons to prove why the Mets rock harder than the Yankees, but the truth of it boils down to one blatant, glaring point: Rudy Giuliani is a Yankees fan. New York's No. 1 jerk is a fan of New York's No. 1 jerks. (And because fandom is usually passed down genetically, so is 14-year-old Andrew Giuliani. One close-up shot of Satan's Lil' Butterball in navy and white, greased hands shoveling popcorn down his jiggly gullet, and you'll know exactly what side you're pulling for.)

Giuliani likes to say he grew up in Brooklyn. No. Giuliani was born in Brooklyn. He grew up on Long Island. He's a traitor and a liar, but we knew that already.

Giuliani likes to think that only real New Yorkers can root for the Yankees, but that, also, is a lie. People from every dustbowl and swamphole across the country wear Yankees gear, because it's easy to root for a sure thing.

But the Mets aren't a sure thing. They're the real thing: a baseball team with heart and drive, whose success isn't predicated on salaries. Rising star Timo Perez made just $36,000, prorated, as a Met this year. That we can identify with.

The Mets are ours. That's why Shea is called "our house." You can have the House that Ruth Built. I'll take the one built by working-class hopes and dreams any day.

John Giuffo has written for Newsday. He lives in Queens, N.Y.