In the Presidio Challenge race, competitors fracture their shoulders to uphold the honor of the new economy. 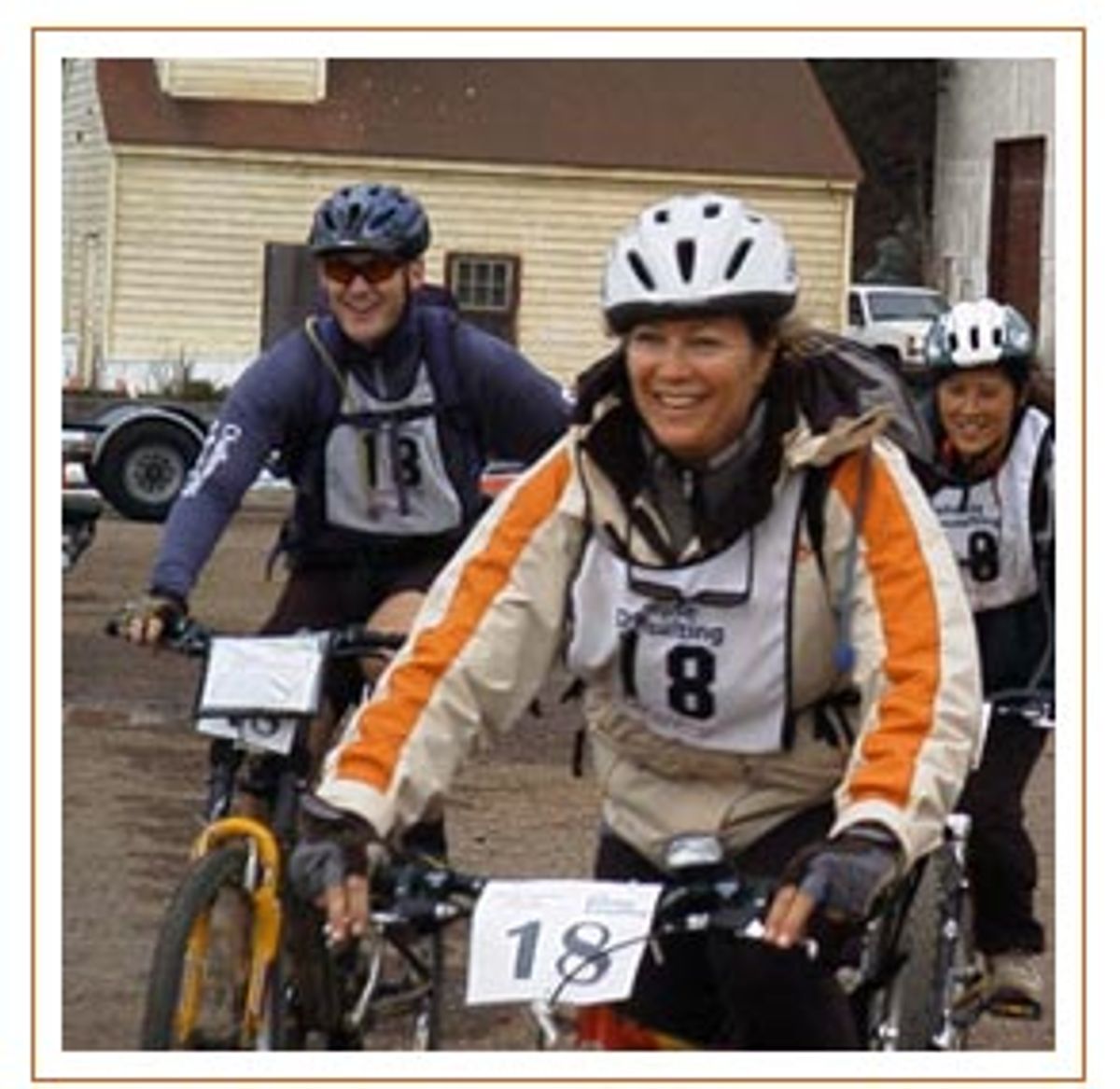 If there is any corporate bonding ritual more physically demanding than the San Francisco Bay Area's Presidio Challenge, it should be against the law. Just consider the recent body count.

Before this two-day adventure race ended Monday, no fewer than five people had been sent to the hospital. Two of the casualties were cameramen who weren't even racing. They fell in the line of duty while attempting to document the athletes' kayaking, mountain biking, trekking, running and rappelling down vertical rock faces. I, for one, grew a bit peaked just driving and helicoptering around from checkpoint to checkpoint following the race's arduous progress.

One unstoppable competitor, Bob Damon, 53, a managing director for Spencer Stuart, an executive recruiting firm, completed the majority of the more than 24-hour race with a fractured shoulder. In last year's inaugural race, the Spencer Stuart team was disqualified because one racer became so dehydrated he had to drop out. So even after Damon took a bone-fracturing spill on his mountain bike early in this year's competition, there was no way he was going to give up. "It's all for one and one for all," says the indefatigable musketeer, adding that three days later his shoulder "feels like shit." He's making an appointment with an orthopedic surgeon.

The Presidio Challenge is the Mount Everest of corporate team-building exercises. "It's the new economy golf," explains Cathy Benko from Deloitte Consulting, the corporate sponsor of this year's event. Except that you sweat a lot more during the challenge. And you might die.

But the goal of all this exertion isn't just to test personal limits. It's to learn how you really work with your office mates under pressure -- limb-threatening pressure. If you think that it's hard enough trying to share a communal workplace refrigerator with some of your co-workers, try to picture huddling under a single sleeping bag with two of them after a day of grueling athleticism without a shower. If it's cold enough, before you know it, you'll be "puppy piling" -- blobbing into a mound of flesh for the added warmth of body heat while you catch a few hours of required sleep before hitting the trail again. It's enough to make the traditional "drink till you embarrass yourself" team-building exercise of the company holiday party look like a hootin' good time.

Why would even the most hardcore athlete voluntarily subject herself to such rigors with the same people she has to face around the cubicles every weekday? "We are here to defend the athletic honor of the new economy," says Nate Tyler, team captain for the group from Keen.com. Dustin Sellers, Keen's director of marketing, says that dot-coms have a lot to prove these days: "You can't show your face in the Marina. It used to be pretty hip to be a dot-commer. But as of late, with the market crashes, it's not as hip. We're taking it as a personal challenge to get out there and show that we're not taking this lying down." He pauses, adding: "Our goal is to finish."

Deloitte's Benko says that the race metaphorically tests exactly those skills that it takes to compete in business today -- "agility, flexibility, nimbleness, resourcefulness and creativity." That all sounds nice enough in theory. But as Eddie Freyer, the race director from Presidio Adventure Racing, explains: "This is much more difficult than anything most of these people have ever done in their lives." He emphasizes that it is strategy, not just strength and endurance, that helps the teams finish. Because getting lost while plotting your course is a real possibility.

Then there's the fear factor. This is not some namby-pamby, 30-second "trust" game where you fall into your co-workers' outstretched arms with your eyes shut, as if that proved anything but your willingness to make a fool of yourself to win approval from the group. On this really scary road to team building, "everyone at some point faces their worst fears," explains Benko. The brutal course, covering about 58 miles depending on how often your team gets lost, was designed by former Navy SEALs. "Just to watch people face that is a bonding experience," says Benko. "To be puppy piling, and sharing food and tossing canteens around ... It's almost like a human nature thing," she concludes.

At the start of the race, 18 teams gathered before dawn in the entirely fogged-in San Francisco waterfront at Crissy Field. Decked out in Gore-Tex and fleece the competitors were in high spirits, jonesing to get on the water. Some teams, like TrailBreaker, which even had its own Web site for the event, had been training almost six days a week for two months.

With just minutes to go before takeoff, Tyler checked his teammates' bladders: bags of water with hoses to drink out of attached to the kayaks and their more natural organs. "Do you have to pee? You should have to pee," he scolded. Sellers struggled to adjust his skirt, the material that was supposed to keep water slipping into his kayak away from his body, as he described their team's motivations: "We've grown so rapidly in employees. And in that process, while it's a crazy wild environment, there's not much outside-the-office bonding when you're doing 12-hour days."

Couldn't they just go out for a few stiff drinks as a group? Sellers explained: "This is a vacation for us. Hey, we're out here in nature. It sure beats sitting in front of your computer and answering e-mails." Hard to argue with that, but the Keen team didn't entirely escape e-mail. Just like any good vacationing dot-commers, Team No. 5 was armed with a cellphone to take Keen calls and two Blackberries to do e-mail en route. Later, during the rock-climbing portion of the course, Tyler would send a work-related status report to the company's vice president of marketing.

When the teams hit the water at 7:40 a.m., they first paddled out around the bay's Angel Island, dodging a giant cargo ship. They docked on the island, ran to the top of the 781-foot Mount Livermore, and then back down again in a three-mile circuit. Then it was back in the kayaks to paddle to the base of the Golden Gate Bridge on the Marin peninsula side of the bay.

Even for a non-sports fan like myself, it's impossible not to get caught up in the drama of the race. These teams pound Motrin like candy -- five pills at a time -- scooping them out of a plastic baggie by the handful to stave off the muscle and joint swelling that they know is coming. No longer wimpy desk jockeys, they eat mighty fistfuls of gorp like it's popcorn.

When Keen.com hits the beach near the bridge in the lead, I'm screaming to cheer them on. They stash their kayaking gear and prepare to mount their bikes, but there's a bit of confusion. Tyler thought that riding on paved roads was allowed in the haul up to the top of the 2,751-foot Mount Tamalpais. But it turns out paved roads are off limits.

Tyler: "That's a challenge. We don't know where we're going."

Sellers: "You said you did."

Sellers: "We got to mentally do this better."

Is this team building I hear?

By 10:28, Team No. 5 took off, still not completely sure how they were going to get to the next checkpoint. The next time I saw them, 1,500 feet higher, they had lost a teammate, had been docked an hour for riding on paved roads and had been disqualified.

"We were doing so well. We were kicking ass. But the gods said no," sighed Sellers.

It seemed that teammate Helen Nigg, Keen's head of business development, went too fast over one of the bumps on the trail designed to keep riders from speeding down the downhills. It worked -- I guess. She went flying, her bike soaring several feet off the ground, and landed on her head and shoulder. It was not funny.

"We were asking her: 'What's your name? Where do you work? What are you doing here?' She could only see out of one eye," Tyler said. He carried her down the hill and Sellers carried her gear; she was taken to the hospital by park rangers.

The two remaining Keen.commers pressed on, but there was more trouble ahead: "We made the ultimate mistake," said Sellers. "We followed another team." Lost, they ended up on a paved road, and had their time docked for cheating, although they'd already been counted out of the race for losing a teammate.

"It's like the market's gone sour, but we're still fighting on," cheered Tyler, before mounting his bike for the next 1,200-foot climb.

The next day, Nigg greeted them at the finish line, around 11:30 a.m. They'd completed two rock-climbing excursions, eight hours of hiking in the middle of the night and still more cycling. I missed this heartwarming reunion, because I was already back in the office staring at my computer, answering e-mail. Tyler himself had to skip the awards dinner because he had to catch a Friday afternoon flight to New York for work.

But it was the night wandering around the mountain that led Damon, the executive recruiter with the painfully fractured shoulder, to what he described as an epiphany about the intersection of athletic team building and business. It seemed in the darkest hour, three teams, including Keen and Spencer Stuart, gave up the competition and worked together in their exhaustion and night blindness to find their way around. It made the whole experience more bearable and, yes, more fun. "Sometimes it's better not to compete, but to cooperate even with your competitors, because the end result is better," Damon mused. "If you look at the Net, it's so complex. Things are moving so fast. It's hard to see who are the real competitors and who you should be working with. Competitors get acquired, companies merge." It's all about "coopetition," he concluded. Embrace and extend.