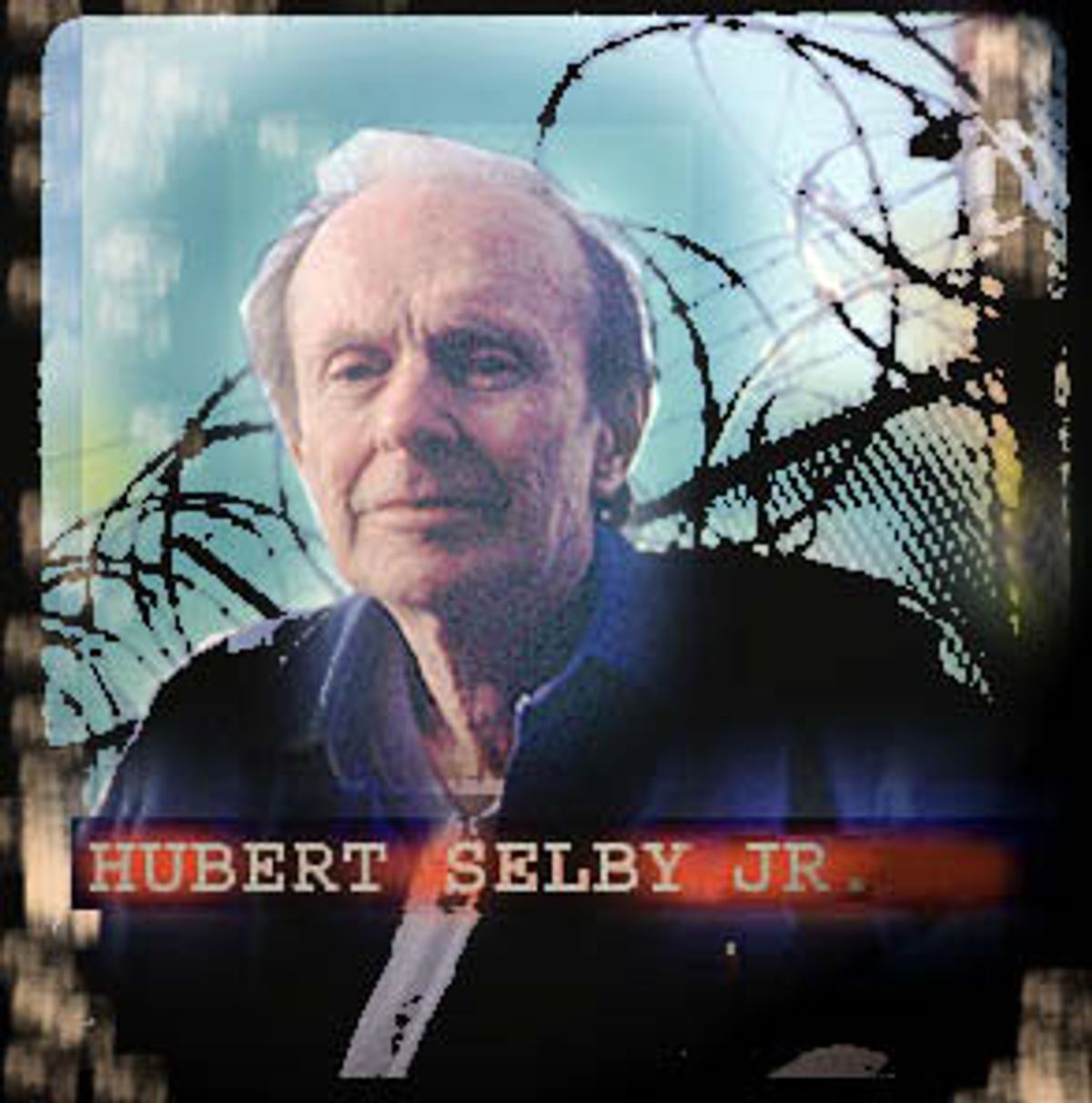 Hubert Selby Jr. is a freak, an anachronism, a throwback to an era when literature mattered and American writers wrote about something other than Marilyn Monroe's hairdo or the last time they had sex with their daddies. Cut from the same cloth as such recently deceased legends as Paul Bowles, Charles Bukowski and William S. Burroughs, the 72-year-old Brooklyn-born author of harrowing novels such as "Last Exit to Brooklyn" and "Requiem for a Dream" (now a film by hotshot director Darren Aronofsky) seems hopelessly out of place in today's fiction market. A Kafka lost in La-la Land.

"It's funny," says Aronofsky, his generation's answer to Martin Scorsese, when asked about the man whose nightmare he's just translated to the big screen with the help of stars Jared Leto, Marlon Wayans, Jennifer Connelly and Ellen Burstyn. "When we went to Cannes to premiere the film, no one wanted to talk to Ellen or to me. They all wanted to talk to Hubert Selby Jr. He was the celebrity over there. Europe, unlike America, recognizes his contribution to literature."

Indeed, I haven't met a European yet who is unfamiliar with Selby's work. Whenever Selby is on the Continent he gets an incredible amount of exposure, whether it's an appearance on French TV or an interview for a German documentary. But in the States, Selby is routinely ignored. Even those in the literary community who should pay homage to this grand old man of letters, this uniquely American Dostoevski, snub the guy. Pick up any guide to contemporary fiction, and the one name sure to be missing is Selby's. By comparison, boring old farts like Saul Bellow and Norman Mailer (or boring younger farts like T.C. Boyle) get enough ink spilled about them to almost blot out the fact that they're so consistently soporific.

"Perhaps it's that a prophet is without honor in his own country. I mean, even Jesus couldn't do any miracles in his own hometown," Selby says with a laugh during a recent lunchtime interview not far from his digs here. "It's a strange paradox because I consider myself a very American writer. To be fair, there are a lot of people in this country who really like my writing. And a lot of writers respect me. But the so-called establishment? They hate me. I guess I should be flattered, because having the respect of your peers is far more important than being accepted by academics."

(Of course, the University of Southern California does retain Selby's teaching services for a graduate course in writing, but after all he's been through, I'll cut him some slack on that point.)

America may be paying a lot more attention to Selby with the release of "Requiem" and all the controversy spawned by its hellish depiction of drug addiction, obsession and madness. Aronofsky updates Selby's tale -- originally set in the Bronx of the '70s (and published in 1978) -- to the mean streets of Coney Island in the '90s. Employing a sort of hip-hop expressionism and lifting dialogue directly from the book, Aronofsky introduces a brand new audience to Selby's abrasive morality tale involving three young dope addicts looking to finance their dreams with a pound of pure heroin.

Wayans, Connelly and Leto play the addicts -- Tyrone, Marion and Harry, respectively. Burstyn plays Sara Goldfarb, Harry's mom, a pathetically lonely woman hooked on chocolate, TV and diet pills. Set to a soundtrack by the Kronos Quartet, the film exposes the lie behind America's childish optimism by dragging each of its characters through a hell of his or her own devising. By the end of the film, we're shellshocked -- as if we've just traveled through Dante's Inferno with Nathan's Hot Dogs, Coney Island's parachute drop and Brighton Beach as circles of Hades.

"The dream I'm referring to in the book, of course, is the great American dream: prosperity, property, prestige, etc. And the fact that it'll kill you dead. Striving for it is a disaster. Attaining it is a killer. It takes many forms, and the results are not happy. It's not a feel-good thing," Selby says.

"'Requiem' is about the cancer of that dream," he continues. "Of course, there are a lot of people who are successful who work very hard. They're not all George W. Bush. But the point is they're misguided. That's not what life is about. We believe, probably more than anywhere, that life is getting all this material stuff. It's a case of misguided ambition and desire."

Aronofsky's cast members get chewed up by Selby's meat grinder, and they end up, variously, dismembered, imprisoned, committed or performing in lesbian sex shows for crowds of salivating males. (Thankfully, the lithe Connelly handles this bit.) Supposedly due to these extremes, "Requiem" garnered an NC-17 from the MPAA. In a burst of rebelliousness, Artisan has decided to release the film to theaters unrated. Of course, all the kids have to do is pick up the new edition of "Requiem," reissued by Thunder's Mouth Press in time for the opening of the movie, and read the book themselves. Heaven forbid!

Selby seems confused, as do many others who've seen the film, about what the MPAA felt so strongly about. There's very limited nudity, and most of the sexual situations are suggested. The violent scenes are brief and generally less graphic than in most R-rated flicks. The same can be said of the drug scenes. Moreover, the film imparts a rather heavy-handed anti-drug message that's true to the novel.

"It's got to be either prejudice or politics. I've seen worse in PG-13 films. For me, it was a very moving experience -- Ellen Burstyn's performance in particular. I couldn't stop crying at the end. The audience in Cannes loved it. They even gave it a standing ovation," he says.

What part do drugs play in Selby's American dream? According to the novelist, drugs come into the picture when we don't get our slice of the pie fast enough or when, after gorging ourselves on it, we still feel unfulfilled. Selby's not only referring to the illicit drugs. He's including the legal stuff, from Prozac and diet pills to coffee, candy and talk shows -- all of those things that divert us from self-examination and spiritual growth.

As far as addiction goes, Selby's fond of saying that he's addicted to "having fun" and "every woman I've ever met," as well as "tea, toast and marmalade." But having lost a lung to tuberculosis at 18 and battled various ailments all of his life, Selby also knows about darker, deadlier forms of consolation -- specifically, heroin.

"Yeah, I've had my experience with chemical warfare. The first time I had any drugs was when I was in the hospital for tuberculosis. It did more than relieve my physical pain. It took away the psychic pain I had been living with all of my life. So I understand the attraction. I understand the disaster of it too. You wake up in the morning dreading another day because you know you're going to do something you don't wanna do," he says.

Selby's habit when he lived in Gotham seems to explain why he lives in L.A. now instead of the New York he says he still loves. "Basically I came out here to get away from me, but the weather keeps you here," he told me once. In 1990, he made a more specific admission to a writer for the Village Voice: "I left New York and moved to Hollywood to get away from drugs. I was in Hollywood a couple of days and already I knew 347 dope fiends." Selby eventually kicked with a little help from some time in the pen, something he doesn't readily discuss. On and off, he's been in L.A. for 30 years and dead sober for nearly as long.

Selby's battles with his internal monsters and the wisdom derived therefrom inform much of his literature. Though his oeuvre is small -- five novels and a collection of short stories -- one of Selby's novels is worth more than countless others by the writers whose names appear all too often in the New York Times Book Review. This is due to talent, certainly, and to his ability to empathize with the least "sexy" of society's inhabitants.

"I've experienced a lot of the dark side of life," Selby explains, those ice-blue eyes staring out of a wrinkled jug that might belong to the actor Steve Buscemi in a decade or two. "Because I ended up spending a lot of time in my shrunken, pumpkin head. Not necessarily a good environment.

"I've always felt alienated. I realized that I've been terrified my entire life. So I can identify that fear which drives so many of the people that I write about. That seems to be what I'm supposed to explore, because I can. Looking back now over 45 years of writing, 72 years of life, maybe I do it because nobody else seems to give a rat's ass about these people. Somebody has to give voice to those who are voiceless," he says.

And what if he gets no respect? Selby shrugs his shoulders.

"It comes with the territory. Did you hear the one about the blond Hollywood bombshell who sleeps with the writer?" he asks. "No, that is the joke."