Champions again, thank you very much

Hype about a blood feud aside, the Mets prove to be delightful hosts as the Yankees storm to another title. 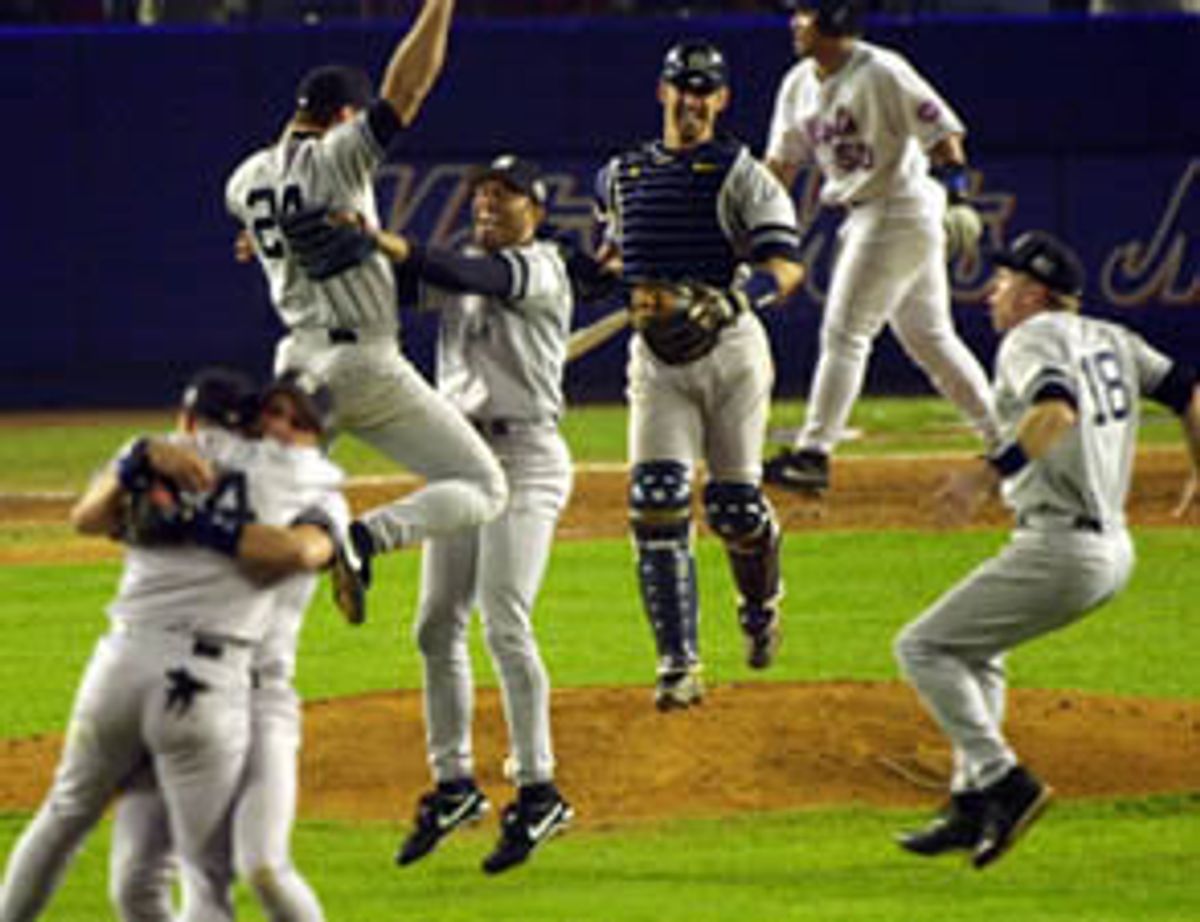 "Not in our house." That was the theme the Mets latched onto as they fought to stave off elimination in the World Series on Thursday night. No, it's not original -- it's borrowed from the big locker-room scene from the college football tearjerker "Rudy." And, no, it didn't work.

Mets skipper Bobby Valentine, who has never been accused of undermanaging, allowed Al Leiter to pitch to Luis Sojo with two on, two out and the score tied 2-2 in the top of the ninth. On Leiter's arm-numbing 142nd pitch of the night, Sojo -- who by some Miracle on 161st Street seemingly learned to hit this season at the advanced age of 33 -- bounced a single to score Jorge Posada and Scott Brosius with the go-ahead runs. The Yankees held on to win 4-2.

As Yankees manager Joe Torre secured his three-peat, and fourth title overall, he could have been excused for wondering if a "thank you" note was in order and whom he should send it to: Leiter? Valentine? Or the most beneficent of all, closer Armando Benitez, who gift-wrapped Game 1.

Indeed, for all the invective that surrounded the Subway Series, the Mets were exemplary hosts. Perhaps it stemmed from an inferiority complex -- Shea Stadium is, after all, the architectural equivalent of a Ford Pinto, festooned with neon sculptures that would be right at home in any better shopping mall. Unlike the ballpark in the Bronx, the wrecking ball is on the way for Shea: The only question is how soon.

But while New York's tabloids and the sports talk shows have made the Subway Series out to be baseball's version of the Bloods and the Crips, the reality is both calmer and more complex.

The deciding game, for example, began with a hear-it-to-believe-it moment. A group of crosstown visitors began to chant, "Let's go Yankees." The fans in black responded, "Let's go Mets."

No one stepped on anyone's lines, and the result was call-and-response harmony that would play on Broadway.

The amazing thing, of course, is how many Yankee fans made it out to Flushing in the first place, all wearing their colors proudly. After five years of playoff baseball, Yankee fans have learned how to finesse the ticket system and they made themselves right at home. In Game 3, they actually posted K signs for every El Duque strikeout -- something that George Steinbrenner would never allow in the House That Ruth Built.

The regular-season Shea faithful are one of baseball's toughest crowds -- they booed All-World catcher Mike Piazza mercilessly for months after his arrival, and all but succeeded in driving the franchise's best player ever right out of town. But except for a couple of guys who kept shouting "You suck" to reserve Yankees outfielder Luis Polonia, those leather-lunged die-hards didn't have the scratch or the juice to make life miserable for the Yankee faithful. The Mets fans who were able to score Subway Series tickets were largely quiet, well-behaved and well-connected.

In the seventh inning, when the crowd briefly chanted "Yank-ees Suck" as Yanks starter Andy Pettitte quelled yet another Met rally, the effect was far more cute than menacing.

Even Keith Hernandez, the spiritual leader of the '86 Mets championship team, noticed the change in his old stomping grounds. "It's so corporate," he said before the game. "And so quiet." The fans, at least.

Whatever the paying patrons may have lacked in volume, Shea's turbocharged P.A. system more than compensated for. The sound pressure during a particularly rousing call to arms reached an ear-shattering 102 decibels. That's more than twice as loud as OSHA standards for, say, a boiler factory.

Indeed, after Mariano Rivera recorded the final out -- Piazza obligingly hit an ICBM right at a waiting Bernie Williams -- and the postgame celebration began, the Yankees' only taunt seemed aimed at the public address system.

As the first bottles of Korbel and Mumm Cordon Rouge were cracked, shaken and sprayed, Denny Neagle, Clay Bellinger and Jeff Nelson let loose an ear-piercing howl and warbled an off-key version of "Who Let the Dogs Out," the Baha Men anthem that became this summer's rallying cry at Shea. Warren Zevon would be proud.

Over in the other corner of the crowded visitors clubhouse, which only 24 hours before had been under a foot of water when a standpipe broke, a conciliatory Steinbrenner held court.

"The Mets, their fans, I was told, 'You'd better be careful going out there, they're going to rake you over the coals,'" he exclaimed. "They never treated me with anything but courtesy. They have great fans. I don't understand all this thing about all this security. I walked into the ballpark alone today.

"They're a great team," added the Boss, his malaprop catching the pulse of the first post-millennial Subway Series. "They gave us everything we wanted."