In this quintessential chick flick from France, women suffer for love, wisecrack, soldier on -- and deliver the melodramatic goods. 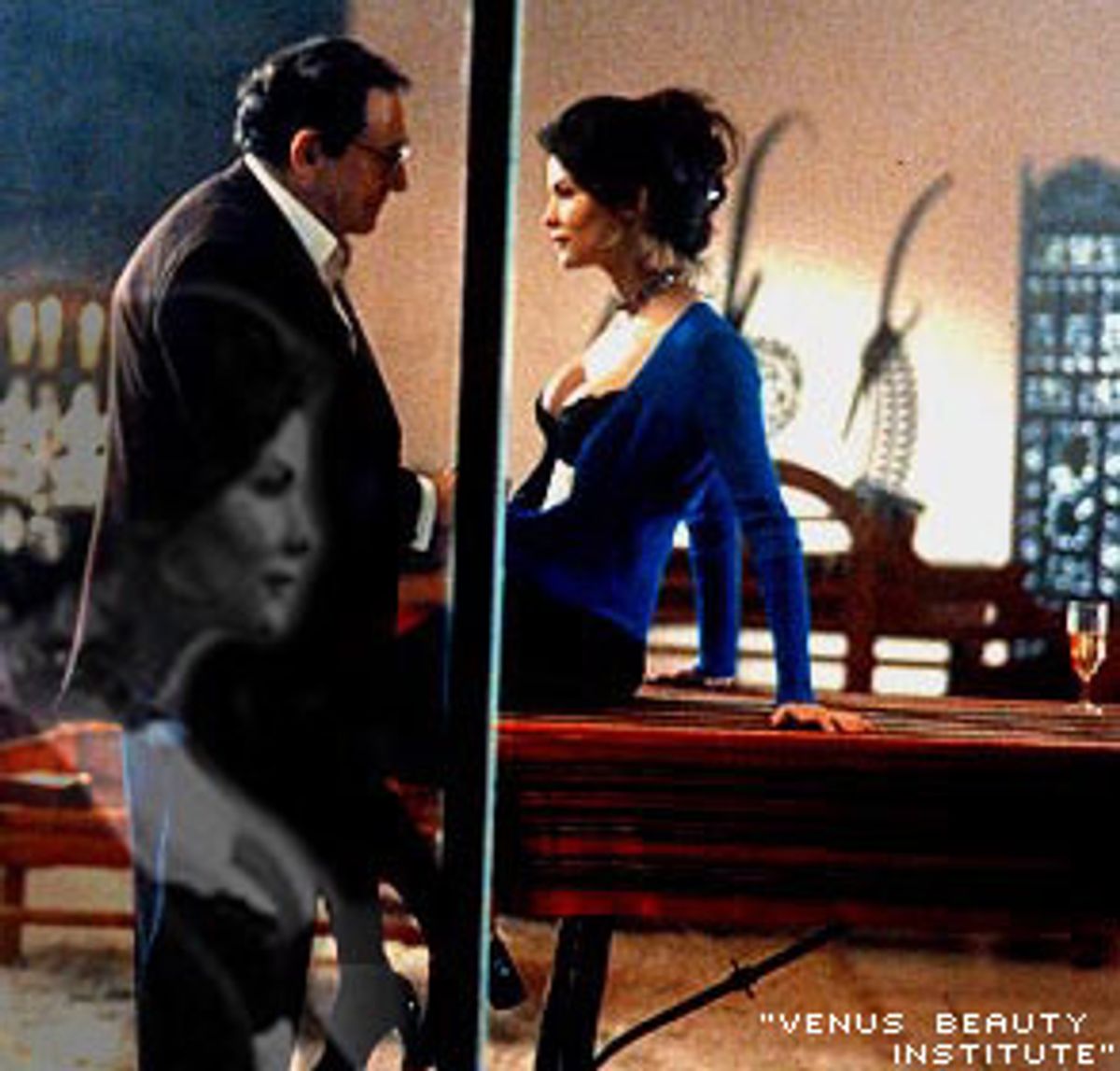 The reason women's pictures continue to be so entertaining (and by "women's pictures," I don't mean feminist movies or movies directed by women but the sort of picture that's targeted toward female audiences, the movie equivalent of soaps) is that they're usually full of two things that movies thrive on: gossip and melodrama.

But the explicit infusion of feminism hasn't done the genre any favors. All the "women's issues" that were implicitly addressed in the old soapy pictures (motherhood, career vs. love, succeeding in a man's world, competing against other women) are now shoved to the forefront like position papers. There are still entertaining women's melodramas, like "Dolores Clairborne," and comedies, like "How Stella Got Her Groove Back." But with the addition of an ax to grind, we've seen potentially fun hen-fests like "The First Wives Club" instead become screechy and broad, and shameless melodrama like "Fried Green Tomatoes" turn crassly manipulative and self-righteous.

Which is why the new French film "Venus Beauty Institute" comes as something of a relief. It doesn't have the sudsy energy of the old women's melodramas; it's a quieter type of movie, but it has the old women's-picture spirit. The characters suffer for love and soldier on with only their wisecracking wit to soften the heartache. "Venus Beauty Institute" translates the old Hollywood formulas into a French mode (i.e., the characters talk out their dilemmas as much as they act on them) and the familiarity is relaxing. Writer-director Tonie Marshall and her actors provide the confidence of professionalism. The goods here may be more muted than you'd get in a traditional Hollywood soaper, but you know that they're going to be delivered.

"Venus Beauty Institute" is set in and around a Paris beauty salon. The characters exist along a sliding scale of age and experience. The fastidious and brilliant Bulle Ogier plays Madame Nadine, the salon owner. A well-kept, well-preserved partridge in Chanel suits, Nadine is like a pinball given the gift of self-discipline. She careens from keeping her girls sharply in line to fawning over her customers without missing a beat or going astray.

In the almost 40 years she's been making movies, Ogier has been different from role to role, from the neurasthenic Victorian murderess of "Celine and Julie Go Boating" to the druggy society girl of "The Discreet Charm of the Bourgeoisie" to the most indiscreet aging bohemian in "Irma Vep." As Nadine, she seems to carry the history of those performances with her. They might be the various roles Nadine has tried on before settling on that of shrewd, no-nonsense businesswoman. Ogier gives an old pro's performance. Nadine has become the successful "Madame Nadine" because she's never lost touch with her cunning inner broad.

Nathalie Baye's Angèle, the movie's central character, is Nadine without the self-knowledge or grounding. She's smart enough to have her own salon, but she hasn't shed the traces of youthful self-destructiveness to be able to focus on what she wants. Angèle is a whiz with the customers, dispensing the pampering and reassurance they're looking for, but her own life is a mess. Riven with guilt over the accident that left an old beau (Jacques Bonnaffé) permanently scarred, Angèle is the classic romantic posing as a cynic, seeking one-night stands instead of love. And she can't trust herself to respond to the overtures of Antoine (Samuelle Bihan), a young man who spots her on the street and is ready to throw over his fiancée and declare everlasting love to her.

That situation is presented as proof of Angèle's inability to take a chance on love, though it doesn't quite work that way. Marshall doesn't establish the love-drunk atmosphere of romantic fantasy where people fall in mad love at first sight. Would you trust a guy who tells you he loves you the first time he talks to you and that he's ready to dump his fiancée for you? Luckily, Marshall keeps focused on Angèle's wounded cynicism rather than Antoine's improbable ardor.

As a younger actress Nathalie Baye always seemed a little too bland, a little too nice. She has always carried a resemblance to Kathy Baker, but she lacked Baker's warmth and recognizably human imperfections. It turns out that she's one of those performers who's blossomed in her 40s, who has acquired some sharp edges and command with age. She gave a tender, slightly sad performance earlier this year in "An Affair of Love." Playing a character enjoying a clandestine relationship with a younger man, she was a woman who has traded self-knowledge for a shot of happiness and was trying to face the consequences without regret.

In "Venus Beauty Institute" Baye's playing a familiar movie type: You could imagine her in an old Warners film of the '30s, playing a sassy waitress or secretary whose quick tongue kept everyone around her at a distance. Angèle is comradely toward her two coworkers, the brassy and sarcastic Samantha (Mathilde Seigner) and the sweet and innocent Marie. (Too sweet and innocent -- Audrey Tautou, who plays her, is pretty and appealing, but it's an ingenue role without many distinctions.) But there's no threat of romance with those two. With potential lovers, their guard is always up.

In Baye's best scene, she impulsively decides to pick up a man in a cafeteria and a range of emotions run over her face in the course of about a minute. She starts out trying to convince herself a meal alone won't be so bad as she chooses among the offerings, dithers a minute before plunking herself down at her conquest's table, and then offers a mix of bald-faced flirting and tactical retreat as she propositions the guy. Angèle is a role that could be a groaner -- the wounded lovesick woman who must learn to love again. But Baye knows that the crusty protective shell is more interesting (and more fun) than the gooey sweet center.

Marshall does a deft job of choregraphing the train of customers winding their way in and out of the salon, and the trio of beauticians skitter off to the various cubicles like dime-a-dance girls zipping to the next customer on their card. The editing, by Jean-Jacques Ferran and Eric Thomas, is disciplined to the point of ruthlessness. It keeps the movie moving from one incident to the next without leaving you unsatisfied. It may take a while to get used to the abruptness with which some scenes are cut off, but Marshall isn't a time waster; she gets what she needs and moves on.

And since she's creating an atmosphere where women come to be pampered and unload their problems, it's fun that she's made the film into an all-star girl's party. Among the customers are the actresses Edith Scob and Marie Rivière (the lead of Eric Rohmer's "Summer"), the pop singer Elli Medeiros and the director Claire Denis ("Beau Travail," "I Can't Sleep").

And Angele's two loving fussbudget aunts, outfitted for Christmas Eve in matching floral-print blouses, are played by the veteran French stars Emmanuelle Riva ("Hiroshima, Mon Amour") and Micheline Presle (the director's mother). One of the funniest bits come when the aunts want to know if, since Angèle lives in Paris, she's met Charles Aznavour.

"Venus Beauty Institute" doesn't make for a big evening out, but it's awfully entertaining, and it lets you indulge your taste for soapy heartache without leaving you feeling that you have to wash the bubbles out of your mouth. It's also unexpected. Marshall never does quite what you expect, even when, as in the melodramatic finale, you see what's coming. It's not lush enough to qualify as a vacation, but it's a pleasurable indulgence.