Unsafe in any state

Ralph Nader's campaign is reckless, its justifications specious and its consequences possibly irreparable. But it does allow fundamentalist leftists to keep living in their dream world. 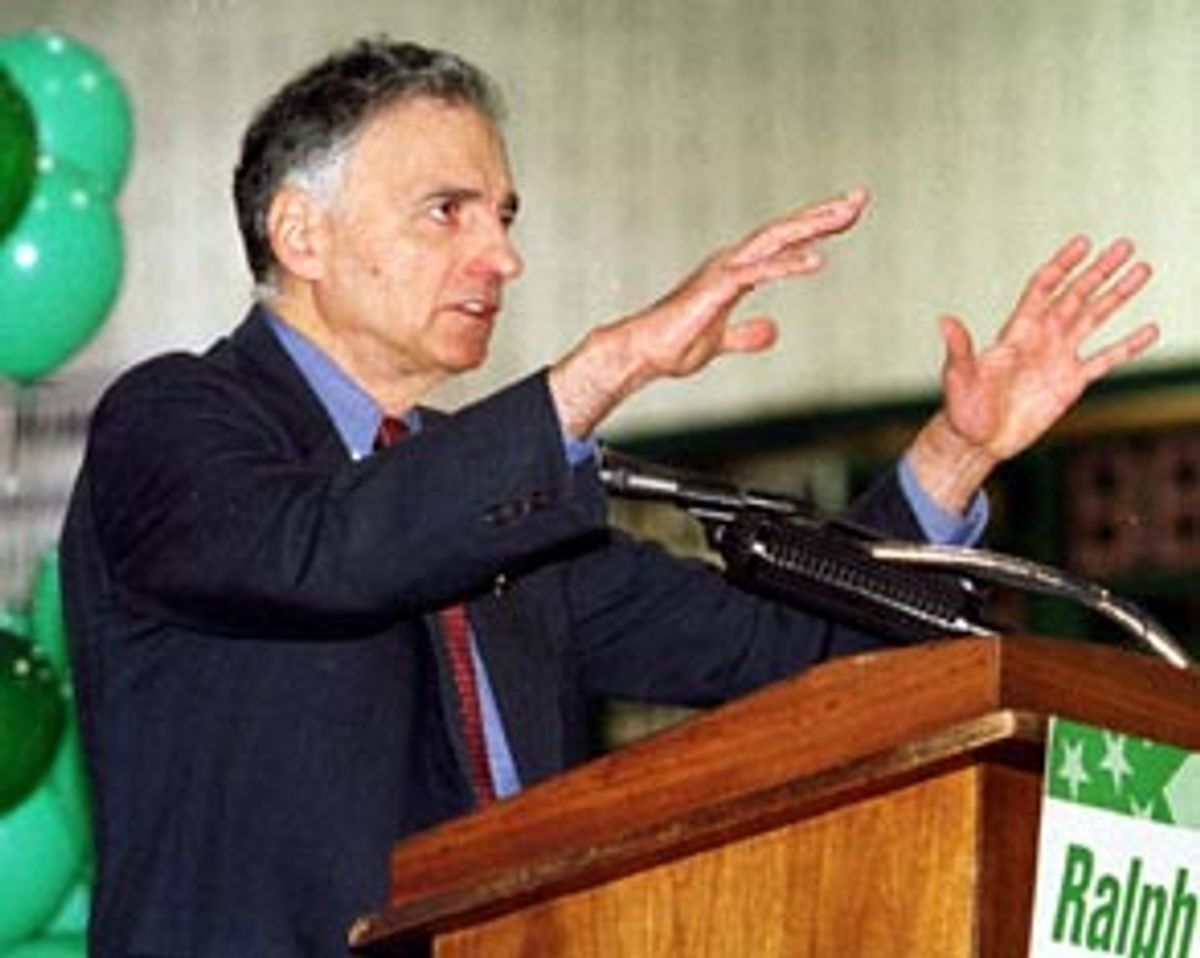 The Gore-Bush contest has been as uninspired as it is overfinanced, a spectacle as tedious as it is dumbed-down (sorry, "on message"). So we arrive at that quadrennial moment when the disgruntled get tired of hitchhiking and look to their own vehicles. As citizen-viewers stream away from the presidential debates wishing out loud that they could vote for someone -- anyone -- other than the major party candidates, enter Ralph Nader on the Green ticket, apparently safe at any speed. No one accuses Nader of taking funny money, phonying his résumé, being out of his depth, talking down or making himself over too frequently. He bashes corporations like nobody's business, more rightly than wrongly.

I'm the sort of voter who ought to be flocking to him. I was the third president of Students for a Democratic Society, active in New Left politics thereafter, frequently critical of Clinton-Gore politics from the left. I think the drug war is a disaster, the Colombia intervention wrongheaded, insurance companies and HMOs cruel and unnecessary punishment, big-money giveaways to media tycoons indefensible, free trade oversold, labor underprotected. Oh yes: Along the way, I stayed out of the 1968 vote -- and therefore, in the light of unforgiving history, did my tiny bit to help Nixon win, and all for the best of reasons, namely, emotions in revolt, disgust for Humphrey's pro-war position, and willful blindness about the left's marginality and the political payoff that could be expected for going it alone.

Here we go again. The arguments for Nader's campaign are dubious, a vote for him reckless and the consequences of building him up severe and possibly irreversible. As I write, Nader strength in Oregon and Minnesota looks like enough to move those states into the Bush column; Nader could also matter in Wisconsin, Michigan, Washington, even California. The outcome might well be, with a few other states, catastrophic -- and not only for the next four years. Just as much of the ground lost to Reagan in the 1980s has never been regained -- repeat, never: not in 20 years, not on labor policy, not on the environment, not on income and wealth inequality, not on support for military goons in the poor countries -- the ground to be lost by a Republican victory is likely to stay lost. As for the arguments about what's to be gained by a big Nader turnout, they dissolve on inspection.

What kind of case is made for the Nader vote? We hear, first of all, the notion that Gore and Bush, or Democrats and Republicans, are essentially the same -- two names for the same Republicrats. Yet how a thoughtful person can think the differences are negligible boggles the mind.