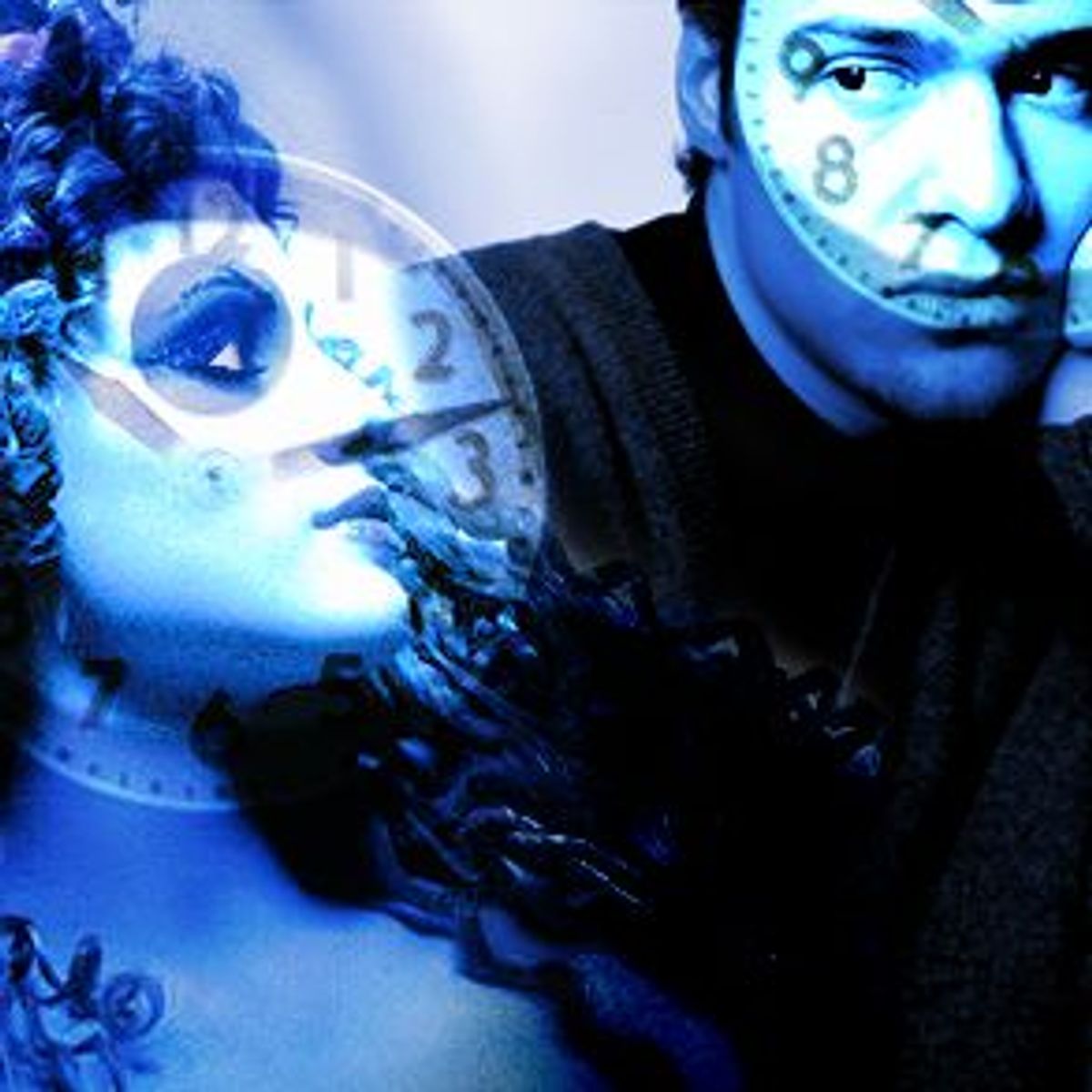 I want you to do me a favor," Stacy's mother said, pushing the newspaper clipping across the table to her daughter. "I want you to go to this."

"This" was SpeedDating, the latest Jewish dating phenomenon, in which singles meet at coffeehouses for collective blind dates -- or more specifically, to go on seven seven-minute blind dates in one evening.

Stacy's mother remains hopeful that her daughter, a 29-year-old Seattle tech professional notorious for dating non-Jewish men, will change her ways. She's so hopeful that she offered to buy her daughter a sofa -- all Stacy has to do is partake in a night of SpeedDating.

Stacy, who recently split with her latest non-Jewish boyfriend, admits that with the couch bribe as her excuse, she feels less desperate registering for Seattle's upcoming round of SpeedDating. (Stacy, who's both a head turner and a sidesplitter, wouldn't give her real name. In fact, all the SpeedDaters mentioned here asked for pseudonyms. Even for the attractive, intelligent and personable, the stigma of matchmaking still stings.)

Already a hit in 20 North American cities and spoofed on an episode of "Sex and the City," SpeedDating made its Seattle debut in October. Like Stacy, I padded my ego with a justification -- writing this article -- and signed myself up for the matchmaking extravaganza. Still licking my wounds from a nasty breakup, I was just depressed enough to believe that 49 minutes of blind dating held therapeutic promise.

I was among three dozen Jewish singles between the ages of 30 and 40 at Seattle's groundbreaking SpeedDating event. And for the record, the earth did not move. Yet since that initial evening of supersonic coupling, SpeedDating organizer Techiya Levine has received several hundred inquiries from Seattle singles, some of whom aren't even Jewish, all eager to register for this bimonthly hormonefest.

"It's like ripping off a Band-Aid, or like running into the Mini Mart," Stacy explains. "It's quick and it's painless."

The first Seattle event occurred -- where else? -- at a Starbucks. The tangle of schmoozing singles waiting for the mating marathon to begin looked inviting enough. And they didn't seem to mind the latte-sipping nondaters craning their necks over their laptops to see the freshly coifed, name-tagged folks being filmed and interviewed by the evening news.

Don't think for a second that only the bold and beautiful worked the floor. The shy and awkward made quasi-successful small talk with the bubbly and boisterous. Doctors chitchatted with dot-commers. Artisans bent the ears of accountants. And recent New York and California transplants gleaned restaurant and camping tips from veteran Seattleites (who aren't usually known for their warmth toward Manhattan or Los Angeles).

A few women did share my apprehension. But the candy-store-struck men certainly weren't complaining.

"You can't go expecting all supermodels, because that's absurd," said Phil, a 34-year-old reporter who relocated to Seattle this year. A no-nonsense, self-assured guy, he was impressed with SpeedDating's knack for "cutting through a lot of the B.S."

"I was a little worried it was going to be the parade of old boyfriends," said Leslie, a 32-year-old doctor who has lived in Seattle for eight years. Insightful and adorable, she's fond of uttering gems such as "If guys went around with little name tags that read 'Raised a Christian but Flexible,' dating would be much easier." Rather than bumping into all five Jewish guys in town she has dated, Leslie was elated to find a roomful of strangers at SpeedDating.

I was having the same thought -- until I spied one of my best friend's former boyfriends amid the minglers. Advancing to say hello, I caught him off guard, perhaps a tad sheepish at being found out. "What are you doing here?" he asked, distracting me from the more relevant question of what he was doing there.

Dutifully, I exchanged $20 for my name tag, scorecard and cheat sheet, a list of suggested questions that included "How often do you talk to your mother?" Techiya, our hostess, instructed us to sit at our respective tables and laid down the ground rules. There were 18 tables in all, with one woman and one man assigned to each. Women would hold court at their assigned table throughout the evening; men would rotate up two table numbers after every "date."

The innovation of Aish HaTorah, an international Jewish organization that aims to strengthen the Jewish community and promote Jewish marriage, SpeedDating is touted by its organizers as an alternative to the bar scene, your friends' dinner parties and the hit-or-miss Jewish personals on JDate.com.

The underlying fear among interfaith daters and nonreligious Jews is that Jewish singles groups are predominantly populated with people far more religious than they. (They go to temple even when somebody hasn't died.) So SpeedDating targets the unaffiliated Jewish population, those who mainly consider themselves Reform Jews. The occasional Conservative Jew attends, but Orthodox Jews are turned away from SpeedDating to avoid matching the highly religious with those who haven't been to temple since their bat or bar mitzvah -- which would be an exercise in futility at best. According to Techiya, the unaffiliated Jews signing up for SpeedDating range from those who date only Jewish to those who haven't but would like to try.

Nadine, 36, is a gregarious social worker who's a longtime Seattle resident, attends temple regularly, wants to raise a Jewish family and would prefer her mate be Jewish: "I just feel more comfortable with Jewish people. It's a common heritage, a common language."

My friend's ex, Josh, is a 34-year-old acupuncturist and practitioner of Chinese medicine who relocated to Seattle three years ago. He has a smiling demeanor that can't help being charming, even when he gets metaphysical on you. Having rediscovered Judaism a couple of years ago, he shares Nadine's sentiments about Jewish religious practice, partnership and family. So does sofa-shopping Stacy, except for the religion part -- she describes herself as an atheist. Still, the easy familiarity among Jews (plus the parental pressure) has prompted her to rethink her penchant for non-Jewish men.

Curiously, no one names preventing Jewish assimilation -- 20,000 Jews "lost" yearly to interfaith marriage, according to Aish -- as a reason for dating Jewish.

Finding datable Jews in this town can be challenging, since Jews constitute just 3 percent of greater Seattle's population. Phil, the reporter, likes SpeedDating's odds: "To put it kind of clinically, it's a numbers game."

Back at the Jewish casino, SpeedDating maven Techiya explained that a bell would announce the start and end of each date, at which time we'd indicate on our scorecards whether our date was respectful and whether we'd like to see him or her again. If both singles circled "Yes," Techiya would give the man the woman's number. He'd then have four days to call, or he'd never SpeedDate in this town again.

We weren't allowed to talk about work, per Techiya, who wanted us to get to know the "real person" sitting across from us at the table. A good rule, though tougher than it sounds.

Before I knew it, date No. 1 was seated facing me and our fearless hostess was shouting, "Ready, set, date!" And we were off, gabbing about what we like best about Seattle: the mountains, Puget Sound, the rare occasions on which people use their turn signals, the three days of sunshine a year. Nice guy, but not my type. I circled the "No Way in Hell" option on my scorecard and awaited date No. 2.

And waited. And waited. All the men took their seats. I felt like an idiot, and certainly not a feminist, wondering where my next suitor could be. Eventually he showed up. He really liked the décor in Starbucks -- the drapes, the sofas occupied by the now-smirking onlookers. I really like swap meets, not corporate chains, and wondered where that bell was.

Each time the bell tolled and a new date arrived, I'd try to steer the conversation away from tourist attractions and snow sports toward something more interesting, like the debates, Ralph Nader, the SpeedDating concept or interfaith dating. None of my dates took the bait.

Some of my fellow SpeedDaters had better luck breaking the ice. Josh found that the question "What do you do when you get up in the morning?" cut past the superficial prattling in a jiffy. And Nadine clicked with a date over a favorite author.

There was a freebie slot on our scorecard -- for selecting someone in the room we didn't have a chance to date but whose phone number we'd kill for. Between dates I studied the bachelors scurrying about. Since all the good-looking men without nervous tics were taking seats at other tables, I applauded this wild card option.

Though I didn't especially want to spend more than seven minutes with any of my supersonic dates, I never minded them -- until a guy I'd met six months ago at a dot-com party sat down. I didn't like his abrasiveness the first time we'd met, and I hadn't had the foresight to hide my fatheaded opinion that day.

For seven eternal minutes he twiddled his thumbs and glared at me. He didn't like my innocuous request for his thoughts about the evening, and he made it known he didn't like me.

"Saved by the bell," he said with a smirk, bolting from his chair and practically knocking it over. I then recognized the beauty of the "This Person Was Incredibly Obnoxious" option on my scorecard.

Techiya reported that 17 matches were made that night, though some lucky singles got more than one date for their efforts. This is par for the course, she explained. SpeedDating's standard success rate at each event is 50 percent.

And yes, some singles met their "beshert," their soul mate, through SpeedDating. The L.A. operation has spawned four engagements since its inception in January, according to Techiya.

Comparing notes, I learned that Josh, my friend's ex, made two love connections, one with an acupuncture client of his. Phil hooked up too. And Nadine hit it off with a bookworm who never called, but another of her dates set her up with a friend of his.

All agreed that the user-friendly structure was hard to beat. With the playing field leveled, SpeedDaters had nothing to lose except an evening. "I think it was by far the best way to meet men," said Nadine.

And although Leslie, the doctor, lamented, "There were a lot of nice people there, but my knight in shining armor was not among them," she wouldn't hesitate to return for another round.

OK, so maybe I don't share my fellow SpeedDaters' enthusiasm for the concept. But when monogamous friends want to know how bad my night of SpeedDating was, I set them straight. It was fantastic, I say: Being able to walk out on a crummy date after seven minutes is a godsend.

Michelle Goodman is author of "The Anti 9-to-5 Guide" and My So-Called Freelance Life. Follow her on Twitter @anti9to5guide.