Steve and Jean Case's $8.35 million donation to a school affiliated with an anti-gay ministry prompts a call for a boycott of AOL. 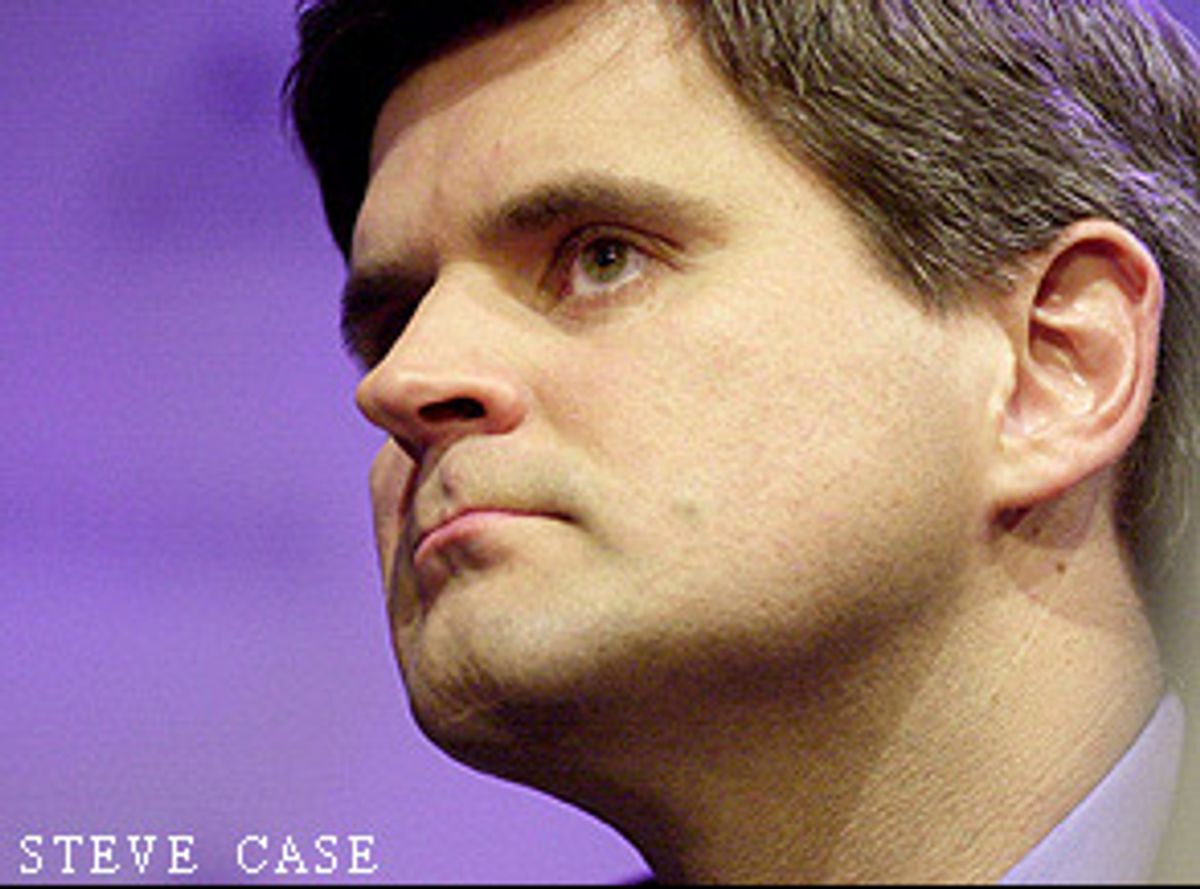 When Jerry Van Nostrand, 47, got an America Online account in 1995, he was married to the mother of his kids. Five years later, he's out of the closet and now spends an average of three hours a day on AOL in a chat room called "Ask Gay Guy Anything."

"Our mission is to be there for people like I was five years ago, who are scared to death, but have some pretty basic questions," says Van Nostrand, who credits the support and information he received from other AOL members with helping him come out as a gay man.

You might expect to find this systems manager for a Boston hospital trumpeting the joys of America Online to anyone who will listen -- after all, the community there helped him change his life.

Instead, he's calling for a boycott of the service.

Van Nostrand's National Gay Cancel AOL Day campaign calls on gay and lesbian AOL members to dump their accounts en masse as of Jan. 1. The boycott is a response to news about AOL chairman Steve Case's philanthropy that has some gay and lesbian AOLers wondering if part of their monthly service fees are trickling down to fund the work of a notorious anti-gay ministry. How sick would the irony be if all that free-to-be-whoever-you-are chatting, e-mail and instant messaging were financially benefiting a bigoted, homophobic arm of the religious right? But it's not quite that simple.

The controversy began with the Oct. 16 announcement that over a year ago Steve Case and his wife, Jean Case, formerly a public relations officer for AOL, donated $8.35 million to her alma mater, the Westminster Academy, a religious school in Fort Lauderdale, Fla. It was seemingly the most innocuous of gifts, earmarked for a new high school building, student scholarships and the creation of a technology center. But Westminster Academy is affiliated with the fundamentalist Coral Ridge Presbyterian Church, as the "statement of faith" on the school's Web site attests: "Westminster Academy is a parochial school, an agency of Coral Ridge Presbyterian Church. Primarily, it is committed to the education of the children of this Church and strives to implement a curriculum that reflects the variety of needs of these children, one that is based upon and is faithful to the Holy Scriptures as interpreted in the Westminster Confession of Faith and the Larger and Shorter Catechisms."

Coral Ridge Ministries is best known among gays and lesbians as the proponent of an "ex-gay" agenda. The premise of the ex-gay mission is that homosexuals can be converted to heterosexuality or -- if that doesn't work out -- celibacy. Such "ex-gay" conversion therapy is not just one more queer political issue; it's a heated and emotional subject that cuts to the heart of gay and lesbian identity; it's a threat to people's very sense of who they are. And Coral Ridge Ministries is one of the most visible promoters of such queer "conversion": The Rev. D. James Kennedy spreads the word regularly on the bully pulpit of the church's nationally syndicated radio and TV program "Coral Ridge Hour." Among the church's tactics: launching a $500,000 national newspaper campaign promoting ex-gay ministries, and renting airplanes to fly anti-gay banners over Disneyland on "Gay Days."

Steve Case, you've got hate mail. The backlash against the Cases' gift to the school has been swift on such Web sites as Gay.com, which first broke the story. The gay and lesbian rights group Human Rights Campaign has also denounced the gift. Executive director Elizabeth Birch chastised the Cases in a letter: "We find it unfathomable how your family could reward a school inexorably linked to teachings that say gay and lesbian Americans are not worthy of dignity, respect and full citizenship."

But the Cases aren't backing down.

"The Cases have the right to make decisions about where they want to donate their money," says Megan Smith, CEO of PlanetOut, "and I think that they need to be responsible with that."

But do Steve and Jean Case even know what an "ex-gay" ministry is? In a statement, Jean Case flatly denied that the gift benefits the ministry. It's for the school, not the church, she maintains. "The gift was not given to benefit Coral Ridge Presbyterian Church or its programs," declared Case. "Steve and I strongly oppose discrimination in any form."

Steve Case defended the gift as a loyal alum's donation, pointing out that he'd given the same kind of money to his own high school alma mater in Hawaii. In a letter to the Human Rights Campaign he wrote, "The gifts were not intended to send any message other than thanks, and were certainly not intended -- nor did they in fact -- support any anti-gay efforts by any organizations or individuals associated with the schools."

But the distinction between giving millions to the school and giving money directly to the church behind it is academic to critics. "I'm not going to put my money into a company where it might eventually make its way into an anti-gay organization," says Van Nostrand. Hoping to stoke a boycott, Van Nostrand posted an AOL Web page about the boycott-AOL day and circulated a message about it on several mailing lists, including GayPoz. Van Nostrand has even been hanging out in queer AOL chat rooms using the handle "Gays Dump AxOxL" (AOL prohibits screen names that contain the initials AOL) and using automated chat software to tell chatters where they can go to find out more about why they should get rid of AOL.

Spokespeople for the AOL Foundation and the Case Foundation have taken pains to point out that the Cases made their gift out of their own pockets, and not from either the company's foundation or their personal foundation. AOL clearly wants to distance the gift from the company as much as possible. And the irony is that AOL is hardly notorious for reactionary corporate politics -- in fact it has historically had a good reputation for creating a welcoming climate for gays and lesbians on the service. Megan Smith of PlanetOut, which provides content for AOL and is the beneficiary of significant investment capital from the company, defends the organization: "I think that AOL has a longstanding record of being incredibly supportive of gay and lesbian people." She points out that AOL invested in PlanetOut as far back as 1996.

Since the controversy broke, Smith says she's been trying to educate the Cases on ex-gay ministries: "In talking with Jean in e-mail, I don't think that she was even very aware of what ex-gay ministries are and is coming up to speed ... I'm hoping as they become more educated on the issues, they'll take some action."

So what action could the Cases take, short of retracting the gift? Michelangelo Signorile, a columnist for Gay.com, found other links between the Cases and anti-gay churches, namely a $100,000 donation to the McLean Bible Church, which also promotes conversion of gays and lesbians from the "lifestyle." He says that he'd like to see the Cases be very clear about what they do and don't support: "I want them to declaratively say they do not support the reverend's beliefs on homosexuality, they do not support the anti-gay movement and think that it's destructive." He hasn't canceled his own AOL account, opting to take a wait-and-see stance.

So far, Steve Case has done little outside of continuing to make general statements about the company's positive record. His letter to the Human Rights Campaign reads, "We are proud of what we've done with the AOL service to provide gays and lesbians with a supportive online community -- and to stand with gays and lesbians and protect their rights and freedoms even when we were harshly criticized (and sometimes even threatened) by anti-gay forces for doing so."

But with $8 million at stake, words may not be enough. Van Nostrand thinks that another financial contribution would make the right statement. "First of all, matching contributions from the Cases to some gay-supportive organization would be nice." (Van Nostrand has other beefs with AOL beyond the Cases' contribution. He thinks the service is too lax in policing hecklers and verbal bashers in gay chat rooms like "Ask Gay Guy Anything." So he also wants quicker responses to gay-bashing from AOL or greater member control of the rooms.) Signorile suggests a gay youth scholarship fund: "They need to show that they're going to be supportive of this really loyal customer base. These are really good customers, and you've just insulted them and scared them about where their money is going, and I think you need to demonstrate how you're supportive of them, and that means financially as well."

Whether or not a boycott will take off -- or even take place on Jan. 1 -- depends on how the Cases respond to their concerns, and how willing the gay and lesbian AOL members are to give up such a widely used platform. Beyond the personal annoyance of switching e-mail accounts lies a bigger sacrifice. AOL is important to the gay community because of just how mainstream it is. If you are an isolated gay teen in a small town in Middle America, AOL can be a lifeline to a much larger gay community. Hell, men in their mid-40s, like Van Nostrand, eventually came out of the closet after they found support and information on AOL.

And as for the controversial gift, shouldn't its implications cut both ways? Does the Rev. Kennedy know anything about the online Sodom and Gomorrah that made those millions of dollars for the religious school? Has he been in a chat room on AOL lately? You don't hear him denouncing those millions of dollars, refusing to accept filthy lucre from a company that promotes a homosexual agenda that will corrupt our children.