A leaked document links Serbian secret police to the assassination of a journalist for the first time -- and threatens to blow apart Serbia's shaky peace. 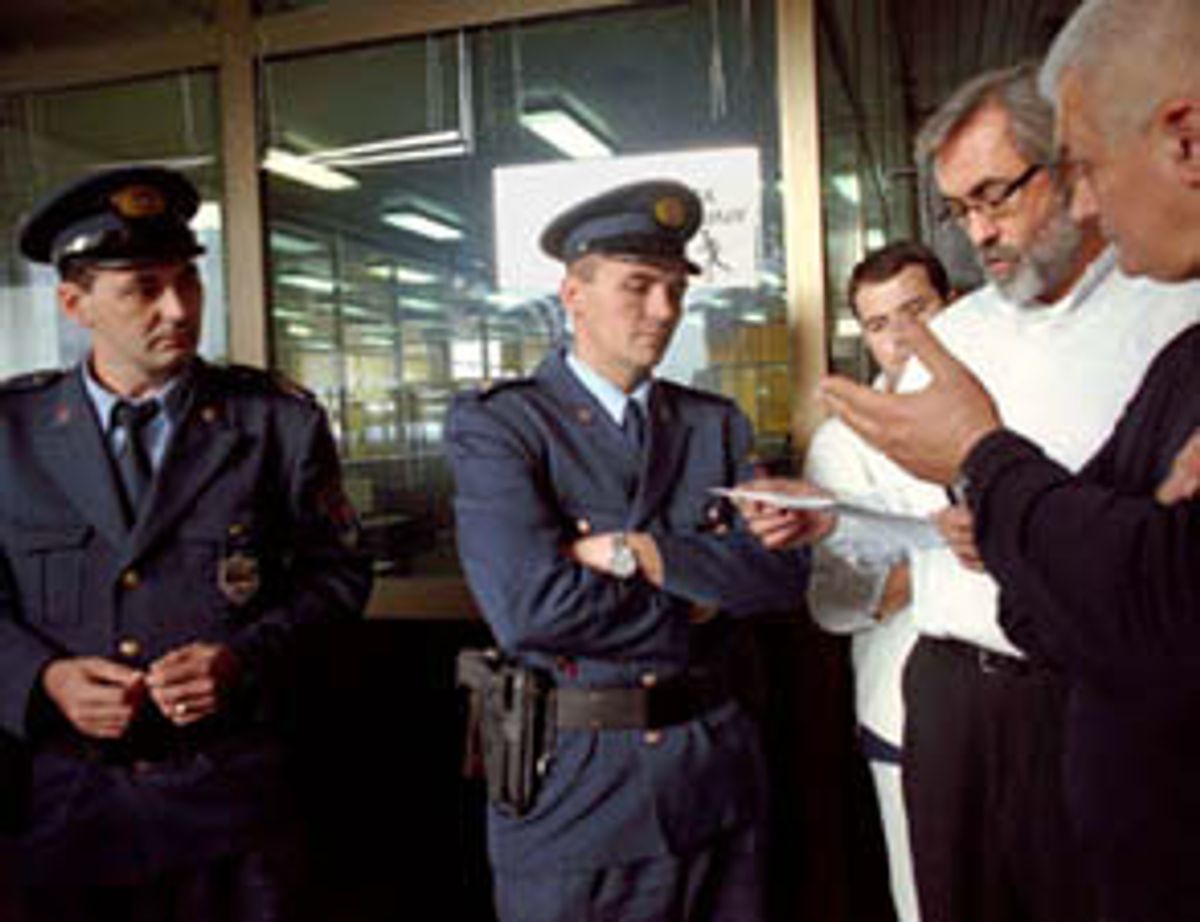 On the day he was assassinated, April 11, 1999, the bearded dissident Belgrade newspaper publisher Slavko Curuvija and his wife, Branka Prpa, went for a walk on Knez Mihailova street. They left at 1:53 p.m., spoke with an elderly couple in front of the Russian Tsar cafe, and then were joined by a balding, bearded man, 5-foot-9, wearing prescription eyeglasses, with whom they spoke for 15 minutes. Curuvija and his wife walked around Belgrade's Kalemegdan park until 3:53, and then entered the Kolarac restaurant for a late lunch at 3:56. They dined alone. At 4:27, the couple left the restaurant, and walked home to their apartment on Molerova street, No. 48.

At 4:58, the secret police who were tailing Curuvija -- and from whose files the above information was taken -- were urgently ordered to withdraw. Two minutes later, Curuvija was assassinated by three men with sub-automatic machine guns, who fled in a white Volkswagen Golf-3. He died in his wife's arms on the sidewalk in front of their apartment building. It was Orthodox Easter Sunday.

Until Wednesday, Curuvija's wife thought she was the only person who knew all the details of their last day together. Now, thanks to the first leaked secret police file, which ties Serbia's state security organization (the Sluzba Derzavnost Bezbednosti, or SDB) to the surveillance of Curuvija, all of Serbia knows.

The leak marks a watershed moment for Serbia: It is the first documented evidence linking the state to the political killings here, which many always believed were ordered by former Yugoslav President Slobodan Milosevic and his secret police chief, Rade Markovic.

"I was very much shaken and shocked by what I read in this document," Prpa, a journalist, told her colleagues at an emotional press conference Wednesday where the document was released. "What only I could have known, what I didn't tell to anybody, was revealed here. Not only that. Seeing the mechanisms of an ugly state, seeing how the state security agency was turned into the political police, is so horrifying."

Despite the common belief here that the state security agency was behind Curuvija's assassination, the secret police file makes for shocking reading. Curuvija, a publisher and journalist, was once close to Milosevic and his wife, Mirjana Markovic, but became a staunch public critic of them.

The document reveals the degree to which the state security agency was consumed with hunting Milosevic's political enemies. Dated April 11, 1999, the file shows that secret police agents were in constant communication with the head of the Belgrade state security department, Milan Radonjic.

Also shocking is the fact that this document is one of the first to provide a paper link -- fingerprints, if you will -- between Markovic, a sinister figure considered to be a member of Milosevic's inner circle, and his subordinates, going all the way down the chain of command to the field agents sent to monitor Curuvija's movements.

This is just the tip of the iceberg, says Natasa Kandic, director of the Humanitarian Law Foundation and a human rights activist well known in Serbia. She received the file by mail Monday, and released copies of it to the press Wednesday.

Kandic says the fact that sources within the secret police agency forwarded this file indicates there are people in the service who could eventually provide the paper trail that would link Serbia's state security agency, and possibly Milosevic himself, not just to dozens of political assassinations in Serbia, but also to war crimes in Kosovo, Bosnia and Croatia.

"Now we have learned the state security agency's actions affected the destiny of many people. Orders issued from their offices include war crimes in Bosnia, Kosovo and Croatia. We have many reasons to expect that other documents will soon be forwarded."

But as Kandic revealed in her press conference, the leaked document raises as many questions as it answers. Most important, why has the new government of Yugoslav President Vojislav Kostunica kept state security chief Markovic in place?

Kandic said the document her group received by mail Monday was also sent to several other high officials in the new Yugoslav government, but that for some reason she was the first one to reveal its contents. The implication that the new Yugoslav leadership, including Kostunica, sat on the document has led to speculation here that Kostunica may have reasons not to fire Markovic.

The timing of the document's leak coincides with demands by some members of the 18-member Democratic Opposition of Serbia (DOS), which unseated Milosevic last month, that Markovic resign or be fired.

Opposition leader Nebojsa Covic, a former mayor of Belgrade considered well-informed about the Milosevic regime, told a news conference Tuesday that the DOS would suspend its participation in the Serbian government until Markovic is removed. The opposition party headed by Vuk Draskovic, who has repeatedly claimed that four close associates killed in a suspicious car wreck last year were victims of the SDB, has also demanded that Markovic be fired.

Kandic vowed Wednesday that the leaked document would do more than get Markovic fired. "On Tuesday at 2 p.m., we filed criminal charges at the public prosecutor's office on the grounds that there is compelling evidence the highest officials of the state security agency were directly involved in the premeditated murder of Slavko Curuvija," Kandic said. "Markovic's resignation goes without saying."

But demands for Markovic's ouster or arrest may plunge Serbia into a crisis. Bozidar Prelevic, a judge fired by Milosevic two years ago, recently became one of three people appointed to head the Serbian Ministry of Interior, which oversees the state security agency. (In a power-sharing agreement reached last week, Kostunica's DOS, Milosevic's Socialists and Draskovic's Serbian Renewal Movement each appointed one representative to the ministry's leadership, until new Serbian parliament elections are held Dec. 23.) In one of his first interviews since being appointed, Prelevic said firing Markovic was potentially a very dangerous business. It could lead, he said, to a total loss of control over the secret police, one of Serbia's most powerful and dangerous institutions.

"I am not going to allow that such a service disintegrates," Prelevic said last week in an interview. "Something like that happened in Eastern Europe, producing one of the most qualified mafias and hit services in the world. We can't let them become available for some adventures. The state security service is a real problem. There is no clear law on how to regulate this service."

Miroslav Hristodulo, an advisor to opposition leader Zarko Korac, said Kostunica may have other reasons not to fire Markovic -- yet.

"Kostunica may have some agreement, or moral obligation to Rade Markovic," Hristodulo said. "It seems on October 5 and 6" -- the days of the revolution --"Yugoslav army General Nebojsa Pavkovic and Markovic may have assisted Kostunica" in turning the army and police and secret police away from Milosevic and to the opposition, Hristodulu said.

He suggested that there may be an agreement between Kostunica and the leaders of the security services to keep them in their positions. And if such a deal exists, breaking it would mean losing control of those rogue forces.

Over time, Milosevic's government was transformed into a vehicle for conducting personal vendettas, a fact that was on display Wednesday.

Curuvija, once a friend to Milosevic and his wife, became an increasingly fierce critic of the regime in 1998, when the Serbian parliament rubber-stamped a draconian public information law. The law allowed Milosevic regime officials to shut down and fine the press based on the merest of excuses.

Curuvija, who published the newspapers the Daily Telegraph and the Weekly Telegraph and European magazine, became one of the hardest-hit targets of the information law. Eventually, he and his editor in chief and one of his journalists were sentenced to five months in prison, and fined millions of dollars for violations of the law.

Soon Curuvija became an openly hounded target of the Milosevic regime, after a watershed event in which Curuvija's newspaper published the clenched-fist symbol of the student pro-democracy group Otpor, whose name means "resistance."

When Kandic and Curuvija's widow, Prpa, spoke to the press conference Wednesday, the mood was subdued and emotional. Curuvija had been a well-known member of the Belgrade press corps. Attending journalists seemed shocked not only by revelations of the state's role in political violence, but at the facts revealed about crimes against one of their own.

"It's terrible what is revealed in this document," said Heri Steiner, an older journalist who serves as president of Belgrade's independent media center, as he introduced the press conference. "It's starting to be uncovered, so many things they did to us."

Kandic echoed Prpa's call for courts and government institutions in the new Serbia to function according to the rule of law. She also asked for the SDB to start revealing information it has on other crimes, including other assassinations and war crimes, and on missing people, including the former Serbian President Ivan Stambolic, who disappeared while jogging in Belgrade in August.

"It's not true the SDB doesn't know what happened to former Serbian President Ivan Stambolic," Kandic said. "They have information, on this and other crimes. These things have to be explained to the public, thrown in the open, and people held accountable for their actions."