The man who fingered Joe Klein goes on the trail of JonBenet's killer, the Unabomber, Monica Lewinsky and Shakespeare. 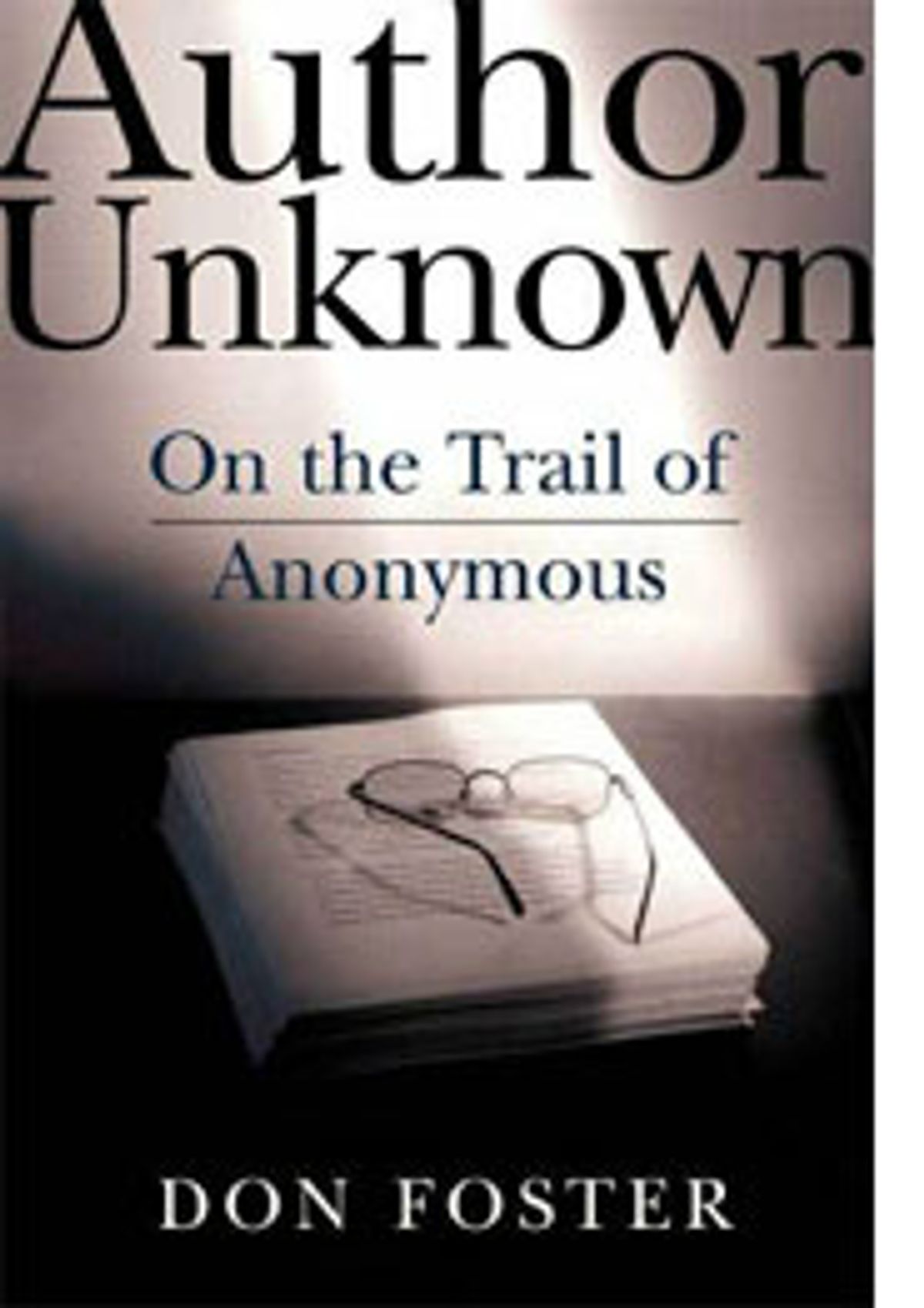 Don Foster is a Shakespeare scholar, but even Shakespeare is a couple of points down the scale from the literary figure he's been studying for the past few years. There is, after all, no more prolific and versatile a writer in all of English than the mysterious Anon., who's been blizzarding the canon with epigrams, essays, documents of state, ransom notes, stories, broadsides and dirty limericks from Saxon times to the present.

Foster made his name by helping to bulk up Shakespeare's C.V. with one more entry: As a doctoral candidate in the mid-'80s, he flagged a neglected Elizabethan funeral elegy as a lost work of Shakespeare's, and gradually invented a computer-assisted method of textual analysis to help prove his case. He's also the guy who fingered Joe Klein as the anonymous author of "Primary Colors." He's since worked on the Unabomber and JonBenet Ramsey cases, the Monica Lewinsky fiasco and numerous other high- and low-profile disputes of the who-wrote-what variety.

"Author Unknown" traces Foster's career to date, and explains the method that launched him as the world's most acclaimed sniffer-outer of literary attributions. It's much like fingerprinting or DNA typing: No two writers, he explains, share the same punctuation and spelling habits, the same locutions and frequency of word usage. Even the frequency of such words as "and" and "the," which writers use unconsciously, can give clues to authorship. The Foster method is at least as much art as science, though: Its data-crunching is guided by intuition -- a certain unquantifiable feel for the details that set a writer's work apart and for what literary influences might be present within it. To some extent we all have that faculty; certainly Foster has more than most. But he gives more credit to the wonky aspects of his method than to the art, which is strange because if you're at all an avid reader, you may be able to peg many of his conclusions pages ahead of the revelation, without a computer or any special knowledge, just by looking at the sample texts he provides. Which is to say, there might not be much suspense to "Author Unknown."

It's still a hell of an interesting book: Foster writes precisely and artfully, with easy humor and a cadenced wit. You rarely see one of his one-liners coming until it's too late to duck.

"Author Unknown" also comes with a shocking disclosure, first unveiled in the New York Times: Clement Moore, an epic, real-life grouch and intolerant muzzlewump, did not write the poem now named "The Night Before Christmas." It was the work of a jolly New York Dutch landowner named Henry Livingston. Below are samples of Moore's and Livingston's verse. These passages are fairly representative of each writer. Quick: Which one wrote "'Twas the night before Christmas"?

1)
To me 'tis giv'n your virtue to secure
From custom's force and pleasure's dangerous lure.
For if, regardless of my friendly voice,
In Fashion's gaudy scenes your heart rejoice,
Dire punishments shall fall upon your head:
Disgust, and fretfulness, and secret dread.

2)
Such Gadding -- such ambling -- such jaunting about!
To tea with Miss Nancy -- to sweet Willy's rout,
New Parties at coffee -- then parties at wine,
Next day all the world with the Major will dine!
Then bounce all hands to Fishkill must go in a clutter
To guzzle bohea, and destroy bread and butter.

Livingston wrote the second one.

Foster's gift and attainment is that he can spell out the difference between these two gentlemen's styles, and explain how he knows what he knows. He's also a great storyteller, not least in the way his early adventures in the Shakespeare trade read like an academic thriller. We join Foster in graduate school, where he discovers a funeral elegy signed by a "W.S." and printed by Shakespeare's stationer. Certain phrases in it betray a knowledge of Shakespeare's later plays. Foster writes up his findings and submits a manuscript to Oxford University Press for publication, which ends up being chewed up and spit out by the anonymous expert reader hired to evaluate it. Internal evidence alone, the reader claims, cannot establish authorship: There must be evidence outside the text. Foster responds by analyzing the reader's letter, discovering his identity and writing him a pleasant note asking him to reconsider his opinion.

The reply is a curt harrumph. He nails the next two expert readers as well. Meanwhile, a blazing media controversy ensues over another, dodgier Shakespeare attribution: the notorious "Shall I die/Shall I fly" poem, a total stinker promoted as a long-lost work of the Bard by Foster's antagonists at Oxford. And since a man can only take it on the chin for so long, Foster snaps a clip into his rifle and rushes into the field. Fusillades of charges and rebuttals roar out. Bold assaults are conducted against enemy data. Wounded are abandoned on the field; prisoners shot. Foster prevails.

His Shakespeare book was eventually published, and its controversial attribution of the funeral elegy became, if not universally accepted, then widely credited. In 1996, his career as a public figure began. With the "Primary Colors" authorship mystery in full swing, New York magazine decided to give Foster a whack at identifying the author, furnishing him with searchable writing samples from several dozen possible candidates. Foster tagged Klein immediately. Both the anonymous "Primary Colors" author and Klein had an idiosyncratic way of using colons: voilà. And fragments. Plus elongated-constructions-tied-together-with-hyphens, and a kind of incredibly dorky locution fulla slang terms. Foster's intuitions about the anonymous author's psychic landscape and literary influences seemed to fit Klein as well. And then Klein -- slimetudinously -- prevaricated. And did a pulling-media-strings kind of thing to discredit Foster: sort of. Until he got busted. When some slimebucket turned up a manuscript with his handwriting. On it.

Foster's next few adventures are somewhat less dramatic. It's his storytelling that carries the ball, along with the opportunity each case provides him to talk about style and language. He had a minor role in the Unabomber case, examining already attributed documents to establish that Ted Kaczynski, a careful, fussily correct writer, had, in fact, written them. He did a cursory analysis of Monica Lewinsky's "talking points" document -- a strange list of prevarications and notes-to-self upon which Kenneth Starr hung much of his subsequent investigation. Lewinsky, who writes like an airhead, seems to have indeed fashioned part of it. And Foster identified one Donald Hawkins (ex-beatnik; now deceased) as the author of the "Wanda Tinasky" letters, written to local newspapers in California and attributed to Thomas Pynchon. For that one, especially, the sample text Foster provides gives away the ending. As you make your way through Foster's presentation of the case, it's not clear who "Wanda Tinasky" will turn out to be, but if you've read any Pynchon at all, the prose keeps insisting that it's not going to be Pynchon.

Despite his impressive record of literary sleuthing, it's somehow unsettling to realize that Foster isn't a superman -- it's just that his close attention to language has become all too rare a practice.