"The Legend of Bagger Vance" 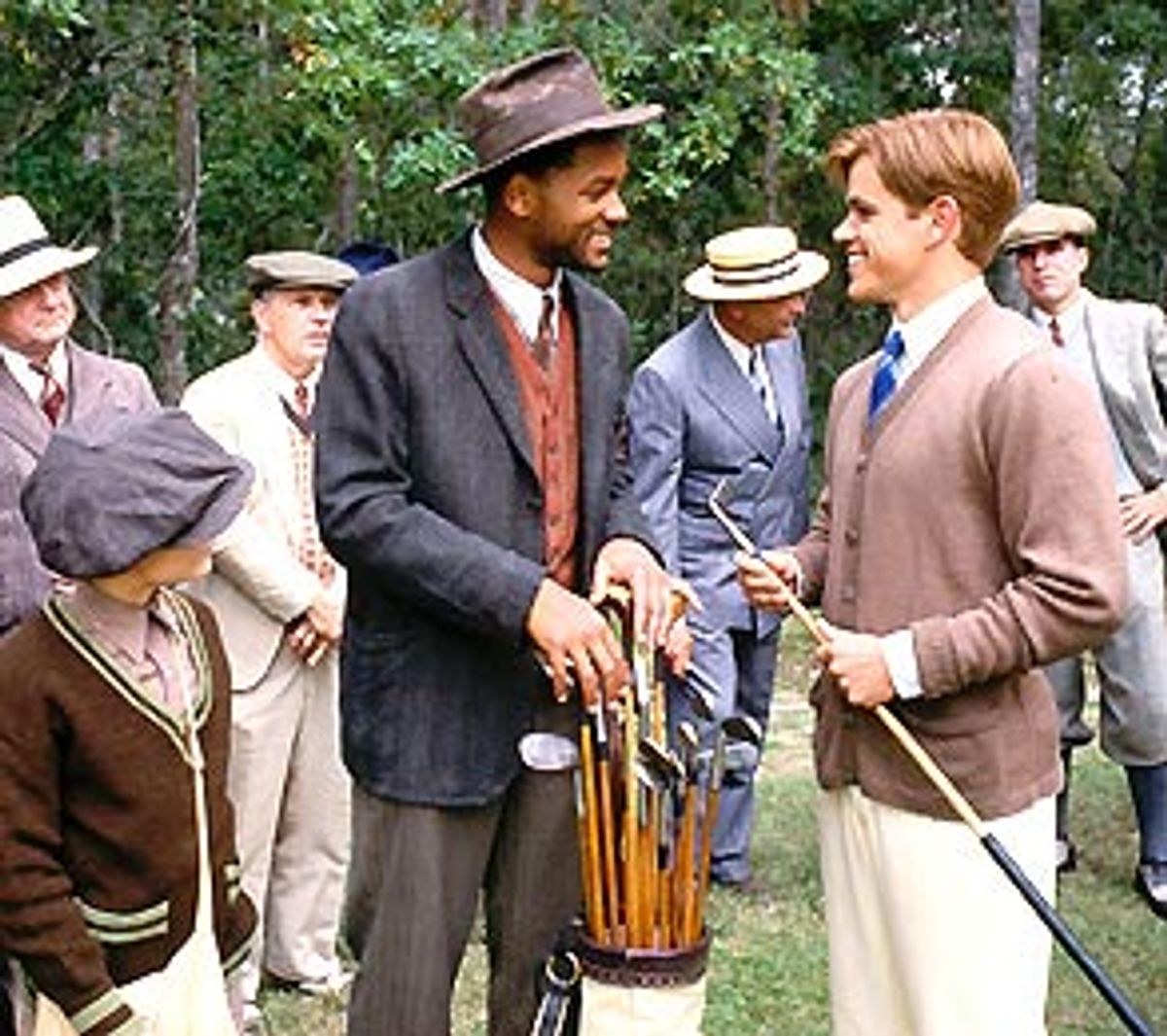 "The Legend of Bagger Vance," with its misty, sun-dappled golf courses and its even mistier view of a man's search for his true self, goes beyond being a typical Robert Redford movie. It's so thoroughly Redfordized that it's practically a parody of itself -- the kind of thing a bright student filmmaker would come up with if given the assignment to make a period movie about golf in the style of Robert Redford.

Redford is fascinated with both the limits and the bold potency of masculinity, but he's afflicted by a curious unwillingness to get his hands dirty. In terms of visual textures at least, pictures like "The Horse Whisperer," "A River Runs Through It" and now "Bagger Vance" achieve a certain suede-jacket roughness but not much more -- they reek of Iron John gone wild with a Banana Republic charge card.

In Redford's world, men brood, stew and stare off into space until someone -- it could be a strong, good-hearted woman, or a cheerful black man, or a combination of the two -- comes along to make him realize that his problem is that he thinks he's the prince of his own little world. How silly he'd been! Why settle for prince when he could be king? Once his worldview is suitably adjusted, he can go about the business of being a man, slow dancing and slow kissing when romance is called for, and swinging a golf club when it's time to hit the ball. He's learned an essential lesson: Life is complicated -- but not all that complicated.

In "Bagger Vance," set in Depression-era Savannah, Ga., our deflated junior monarch is Matt Damon as a once-golden boy called Rannulph Junuh (that's Hunuj Hplunnar spelled backward). In the old days, everything always went right for Junuh: He'd earned the love of steel magnolia sweetie Adele Invergordon (Charlize Theron); he was a golf whiz who won tournament after tournament; he seemed poised to take over the world. Then he went off to war and saw things no man should ever have to see. After his discharge, he eschewed the hero's honors that could have been bestowed upon him and sank into a mire of card playing and heavy drinking, abandoning his lady love in the process.

Unwilling to lie around with a broken heart, spunky Adele attempts to save her dead father's dream golf resort from foreclosure by staging a big tournament starring two of the hottest golfers of the day (Bruce McGill and Joel Gretsch). Who will be the third player? An enterprising lad named Hardy (J. Michael Moncrief; his grown-up self, played in a syrupy cameo by Jack Lemmon, is the picture's narrator) seeks out his hero, Junuh, and drags him back onto the golf course to shape up for the big match.

The problem, as we're repeatedly reminded in case we have trouble processing the movie's central metaphor, is that Junuh has lost his swing, his zest for life. One day, as Junuh haplessly shanks ball after ball into nowheresville, a mysterious figure emerges from the landscape -- he's kind of see-through, so he may even be a ghost. It's Bagger Vance (Will Smith), with a happy smile, a how-de-do and methodically cheerful advice. "You've lost your swing," he says. "You have to go find it." In order to help Rannulph along his hero's course, he's honored to carry Junuh's golf bags.

From there, working off a script by Jeremy Leven (adapted from Steven Pressfield's novel), Redford spins a tale of human redemption. It's a bit like Austin searching for his stolen mojo in the last Austin Powers movie, but a lot cleaner. Along the way, there's plenty of proof that golf is a metaphor for life and many, many shots of gorgeously lush golf grounds. (Cinematographer Michael Ballhaus sure knows how to make those particles of sunlight, and moonlight, dance.)

In the end, we learn that the wise black man is infinitely stronger and more subtly powerful than his shambling, rhythmless white goodwill project -- it's only the color of his skin that keeps him from being anything more than a caddy. Then again, he's a ghost anyway: Who needs the opportunity to go to college when you can do so much good as a winkly-twinkly specter who, with his close ties to nature, can also do stuff like predict the weather?

Most of the racial issues inherent in the setup of "Bagger Vance" are so painstakingly submerged that they barely register. You can't criticize Redford for making the black character in his movie a lowly caddy -- there weren't a whole lot of African-American golf pros in late-1920s Georgia.

But Redford glances too lightly off the story's racial questions. You could call that approach "eminently tasteful" if you're looking for a nice substitute for "wimpy." In one highly significant moment, young, white Hardy, thrilled that Bagger has asked him to be an assistant caddy, extends his hand and respectfully calls him "sir." That sequence is supposed to solidify our view that Bagger is not just an equal being but a superior one, and with it Redford saves himself the messiness of having to deal with any of the thorny racial problems of the early 20th century South.

Dealing with those problems more straightforwardly would, of course, have caused an unwanted cloud to waft over Redford's vision, and he wants to be glum only on his own personal, manly terms. As it is, though, his vision doesn't seem to be doing his actors much good: Damon's lantern-jawed yet tentative masculinity reads like a comic-book caricature more than anything else. Theron, normally a bright and sensitive actress, is disappointingly stiff here (though she looks wonderful in costume designer Judianna Makovsky's terrific chiffon frocks).

Although Smith may be more of an appealing personality than a solid actor (sometimes it's a suitable substitute), his role here doesn't give him latitude to do much more than flash his smile and dispense valuable advice. He plays the character as a gentle cartoon, not a broad one; it's almost as if he's trying to single-handedly maintain a masterly control over the movie's weird racial tone (or, more accurately, its lack thereof), a task that would be close to impossible for any actor to pull off.

Oddly, "Bagger Vance" adds up to even less than the sum of its parts. It plays like the visual equivalent of those "Chicken Soup for the Soul" books, a drearily paced, artificially uplifting, numbingly pretty parable about the importance of selfhood -- or something. The message here, as it's expressed repeatedly by Bagger, is that "Inside each and every one of us is one true, authentic swing." Just don't let Redford clamp his paws around it. In his white boy's world, it truly don't mean a thing.