The GOP candidate "used his position as governor" to avoid questions about his past during jury selection in a 1996 drunken-driving case. 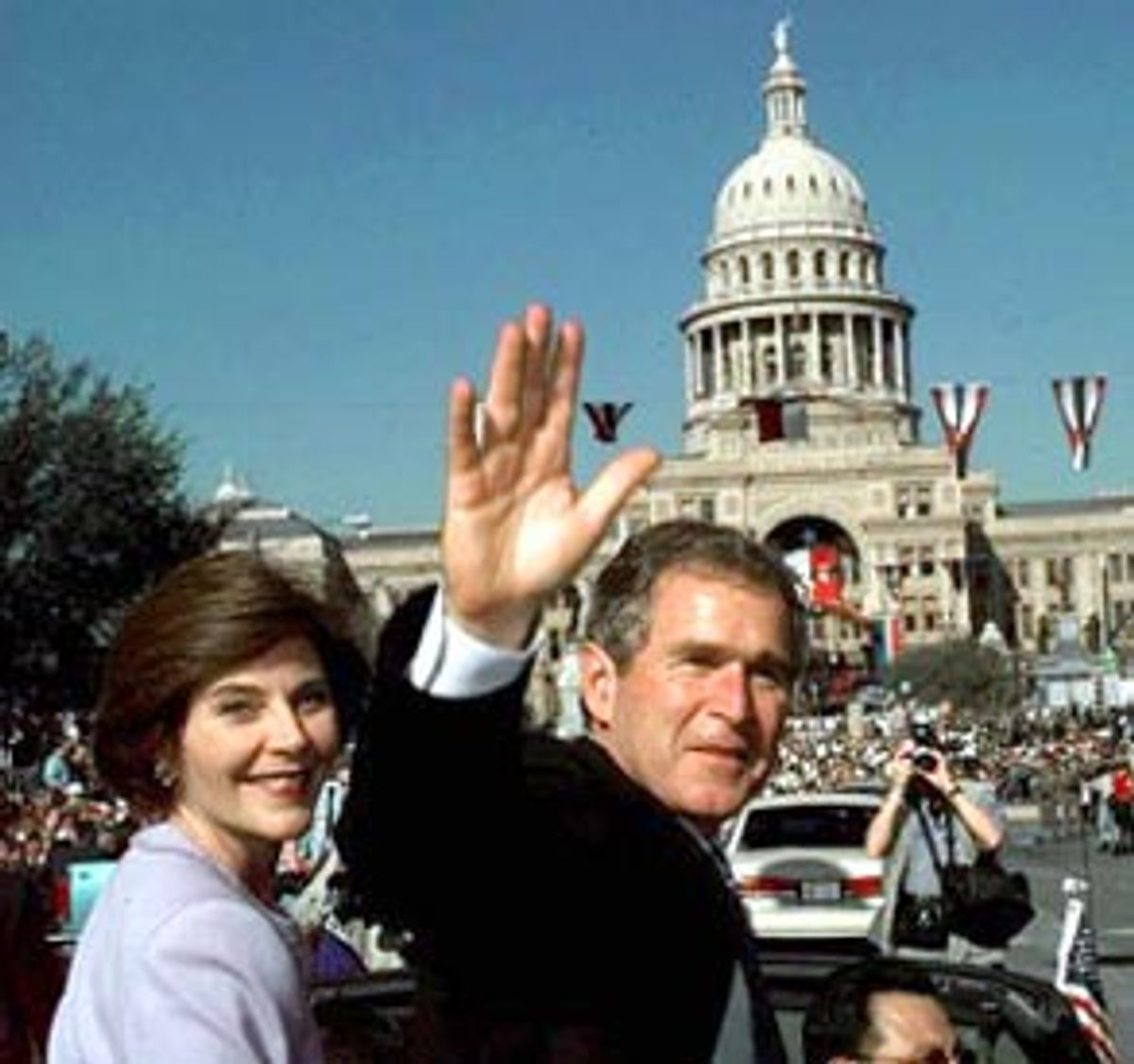 Travis County's lead prosecutor on the 1996 drunken-driving case in which Gov. George W. Bush was called as a potential juror now believes he was purposely misled by Bush and his attorney in an effort to avoid service.

Ken Oden, a Democrat who has been the Travis County attorney for 16 years, charged Saturday that Bush's failure to answer some of the questions on his jury questionnaire, coupled with his lawyer's efforts to get Bush excused because he might someday be called on to pardon the offender, was part of an effort to deceive prosecutors and others.

Bush "used his position as governor" to avoid having to answer potentially embarrassing questions about his past, Oden told Salon. "I feel I was directly deceived."

The prosecutor, who handles civil cases as well as misdemeanor criminal cases for the county, said that Thursday's news that Bush pleaded guilty to a misdemeanor charge of driving under the influence in Maine in 1976 caused him to reexamine the 1996 case.

"With all the new information that has come forward, it's logical to see that there may have been motives at work that none of us knew about. But at the time, we were just trying to be courteous to the governor," said Oden.

That courtesy included an agreement by Oden and assistant county attorney John Lastovica that they would not object when Bush's general counsel, Al Gonzales, asked the court to excuse his client from jury duty because of the possibility that Bush might be called on to pardon the accused.

The defense attorney in the case, P. David Wahlberg, confirmed Oden's version of the events. He told Salon that Gonzales' argument that Bush couldn't serve because he might be called upon to pardon the drunken-driving defendant was "laughable." But Wahlberg says he made the motion to excuse Bush because "it was a foregone conclusion" the governor would be excused, and it was also in the best interest of his client. Wahlberg's client was later convicted and sentenced to probation.

The attorney added that "everybody understood [Bush] just didn't want to answer questions about drinking and drugs and things like that. That was certainly my impression."

Oden also criticized Bush for failing to fully answer a questionnaire given to prospective jurors. It asks: "Have you ever been an accused, or a complainant, or a witness in a criminal case?" Given Bush's arrest in Maine, he should have checked the space next to "accused." Instead, it was left blank. A couple of other questions were also ignored, though most of the queries were answered.

"The questionnaire is irrelevant because it was filled out by a staff member who left a variety of questions blank, including the Social Security number, because he didn't know the answers to them," says Bush campaign spokesman Ray Sullivan. "The governor didn't fill in any questions."

It is not known why Bush failed to fill in the omitted information, or whether he saw the form before it was submitted to court officials. Another Bush spokesman, Dan Bartlett, said Bush "didn't focus on the questions because they decided to strike him as a juror."

But Oden says the incomplete questionnaire matters, and leaves him feeling deceived. "Although I think there was some level of deception to the responses on the jury questionnaire and the request to be excused from the next stage of jury service, I do not believe it meets the test for criminal perjury," Oden said. Even if it did meet the level of prosecutable perjury, Oden added, the statute of limitations on the matter has expired.

According to Travis County Court at Law Judge David Crain, there is no penalty for failing to answer the questions on the jury questionnaire. Crain said it is "fairly common" for prospective jurors not to answer questions on the form. "Some people won't answer anything," he said, adding that if lawyers on the case want to know specifics they will ask the jurors during the selection process.

Crain, a Democrat who has been serving in his elected post since 1992, refused to comment on why Bush sought to be excused. "I'm not going to speculate on what their motives were," said Crain, who added that he agreed with the pardon argument. "I'll leave it at that," he said. Gonzales, who was appointed to the Texas Supreme Court last year by Bush, did not return calls from Salon.

At the time Bush was bounced from the jury pool, it was widely believed that he was looking to avoid questions about his hard-drinking past that would surely have come up during jury selection. The Houston Chronicle reported at the time that Bush's dismissal by the court was "a development that allowed him to avoid potentially embarrassing questions about whether he had ever climbed behind the wheel after drinking."

On Oct. 8, 1996, after Bush was struck from duty in the case, he was asked by reporters if he had ever been arrested for driving while intoxicated. "I do not have a perfect record as a youth," Bush replied.

During the 1996 jury selection process, Oden says, Lastovica, Gonzales, defense lawyer Wahlberg and Judge Crain met in Crain's chambers at the request of Gonzales. In chambers, Gonzales presented his pardon argument. A few minutes later, Lastovica presented the information to Oden for approval. Gonzales' pitch was a "legal argument relating to his [Bush's] position as governor that none of us had ever heard," recalled Oden. "My response was, 'That's an unusual argument.' In 20 years of prosecuting in a town full of government officials, I'd never heard that position before."

"Our position was that as a matter of courtesy to the governor we would not oppose his request for release from service. At that point, not knowing that he hadn't answered the questionnaire, or [had] other motives, he was released," he said.

Oden adds that he told Lastovica not to object to Gonzales' argument, but he wanted to make sure that there was no chance that Wahlberg could use Bush's removal from the jury as a basis for any possible appeal. Oden said he instructed Lastovica "to make sure the defense attorney can't complain about this later. And the cleanest thing would be for him to make the motion to excuse the governor."

"With that agreed-upon script," Oden says, the lawyers came out of Crain's chambers and Wahlberg made the motion.

Bush spokesman Dan Bartlett pointed out on Friday night that it was Wahlberg who made the motion to excuse Bush, and therefore Bush's dismissal from jury service shouldn't be controversial. But the defense lawyer confirms he did it at the behest of Gonzales and Lastovica, and says he believed bouncing the Republican governor from the jury pool, for whatever the reason, was the best move for his client.

While Gonzales' argument about the potential pardon may have carried the day in court, the likelihood of a governor -- and particularly a tough-on-crime politico like Bush -- being faced with pardoning someone for a misdemeanor drunken-driving offense is minuscule, at best.

The aggressive stance Bush took to avoid service stands in stark contrast to the just-folks story that he was feeding the media. When he first reported for jury duty at the Travis County Courthouse on Sept. 30, Bush told Wayne Slater of the Dallas Morning News, "I'm glad to serve." Bush added, "I think it's important. It's one of the duties of citizenship." He also told KVUE-TV in Austin, "I'm just an average guy showing up for jury duty."

And in video footage shown by KVUE in 1996 and again on Friday night, Bush had some additional comments on his feelings regarding the case. The KVUE reporter asked Bush if he didn't "really just want to give the guy a pardon and go home?"

Bush answered, "No, I probably want to hang him and go home."