I am flawed, which explains my attraction to George W. Bush. 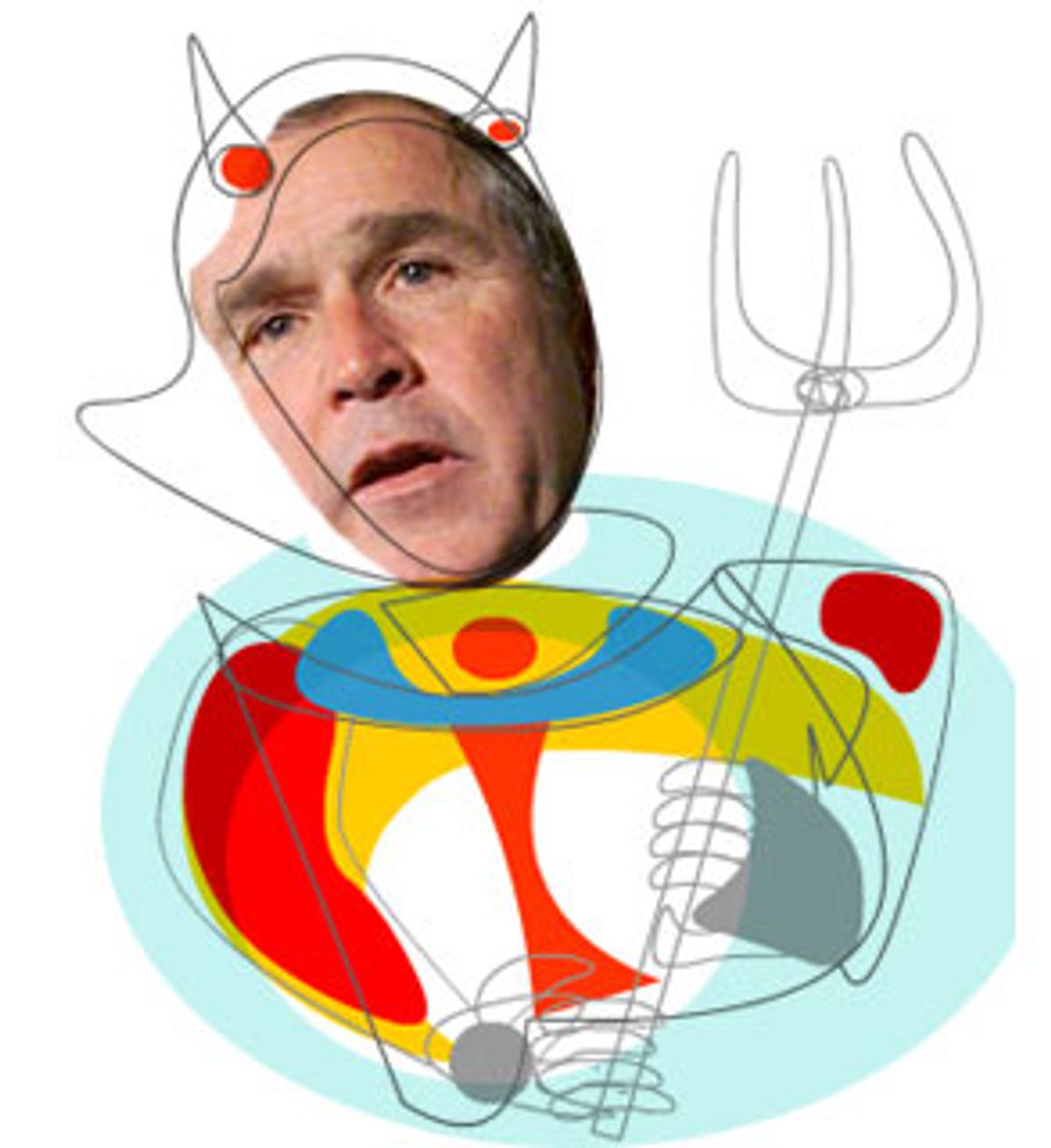 I like bad boys. When I was 7 I had a crush on Satan because I'd seen his picture in the "Children's Bible" and thought he looked sexy with his sunburned skin and hair like Lyle Waggoner's. Bummer about that cloven hoof, though, but other than that my pre-adolescent self was all hot over Satan. In the picture Satan was falling off a cliff, having just been pushed by Jesus, who I guess was resisting Satan's attempts to entice him to the evil side. In midfall, with scarlet robes billowing about him, Satan looked back at Jesus with a mildly irritated expression, as if he was thinking, "Christ, a simple 'no' would have sufficed." But when it comes to evil, "no" is not so simple. Not for me anyway, because I am flawed, which explains my attraction to George W. Bush.

In my defense I'd like to say that at least I'm past the suit-and-tie, demonic Dick Van Dyke phase I went through a few years back, when I dated a corporate attorney who was not so much evil as he was, simply and hugely, self-involved. It goes without saying that he sucked in the sack. He threw me out on Thanksgiving Day no less, and occasionally I still receive calls from him reminding me that he has forgiven himself. So at least I'm not into emotionally greedy little dicks like that. Not anymore anyway. Today I like men who will look you in the face and smile while they fuck you in more than just the physical sense, the kind of guy who will tell you, "Don't worry, you'll just feel a little prick," when he's really getting ready to shove an Eiffel Tower up your ass. Because evil, I tell you, is the ultimate aphrodisiac.

And if you're gonna get hosed it might as well be by someone skilled at it. Because, let's face it, even though Al Gore wasn't actually standing there handing President Clinton the tobacco tampon that almost toppled the presidency, he's still forever tainted by his association with the administration of a president who will go down in history as a lousy lay. Now if Bush -- with his pampered frat-boy upbringing and complete lack of experience in going unfulfilled -- were going to risk blowing the presidency (and I mean "blow" in the Clinton sense, not the Lewinsky sense), he'd do it for real sex, not a sequence of lame and furtive gropes behind half-open doors.

Old Dubya would go out with a bang, and I mean that literally. If he weren't driving under the influence, he'd probably have sex on top of a running washing machine with a stripper sporting fake boobs big enough to be tracked by satellites. And let's hope some residual cocaine would kick in, too, to give his boner a bionic boost, because sex is sex, by God, why waste it?

And with sex, of course, come lies. And a lie is a lie, why waste it? My advice to any politician who's about to lie is this: Make it matter. Everybody knows a skillful liar can get a girl to prop her knees behind her ears in no time. So just think of the American constituency as one big, cute high school cheerleader in the back of a van. To get those panties off her ass a candidate just has to say the right words, not mean them!

So why the hell is Gore wasting his lie quota on crap like claiming he invented the Internet or that he was the inspiration for that mental enema of a male character in "Love Story"? That's not going to get him into the collective underwear of the American public. In contrast, Bush's doozies about how he underspent Gore in the campaign and about how low-income seniors will benefit from a Medicare reform that caters to insurance companies and drug makers -- that's the kind of talk that will grease his way to popping the public cherry. Come on, that has got to get you hot! Right now my nipples could cut glass!

And then there's the element of danger, which puts an amyl nitrite popper under the nostril of your garden-variety sex. Gore, with his mortuary makeup, his pointless little fibs and his concern for the environment, comes across with all the sex appeal of a plankton-eating ocean slug. Now Bush ... well, let me put this simply: Bush could kill you. It's true. Since he became governor, the entire state of Texas has become a big, rotting body bag stuffed with the flesh of death-row inmates. Bush fried that pickax killer who found Jesus in jail, didn't he? I mean he fried her big-eyed, smiley, born-again body with a flick of the phone cradle when her attorneys appealed for a stay of execution: "Sorry, no." Click. Imagine the power! Doesn't it make you want to latch yourself onto his crotch like a lovesick squid?

And, honey, nothin' says lovin' like a loaded gun -- the bigger the better. Among other National Rifle Association-friendly laws Bush has implemented as governor of Texas, people are now allowed to carry concealed weapons into churches, which gives a literal meaning to the term "shotgun wedding" and makes it easier to assassinate evangelists who decry premarital sex, among other things. Bush does favor limited accessibility of assault-style weapons to teenagers, though, and you have to admire a man who takes a stand like that in the face of the throngs of people in favor of outfitting children with assault rifles. I'd love to unhook his pants to see the balls behind that conviction. I bet they'd tumble out and crush me.

The thought has me all atwitter. With balls like that Bush can fuck the whole world. And isn't that what you want in a president?

My bush aches for Bush -- he's the man for me. Bummer about that cloven hoof, though.

Hollis Gillespie is a writer in Atlanta.