Clamping down on high-tech growth is good for high-tech

San Francisco's anti-development Prop L will squeeze tech firms into a battle for survival. And nothing could be better for them. 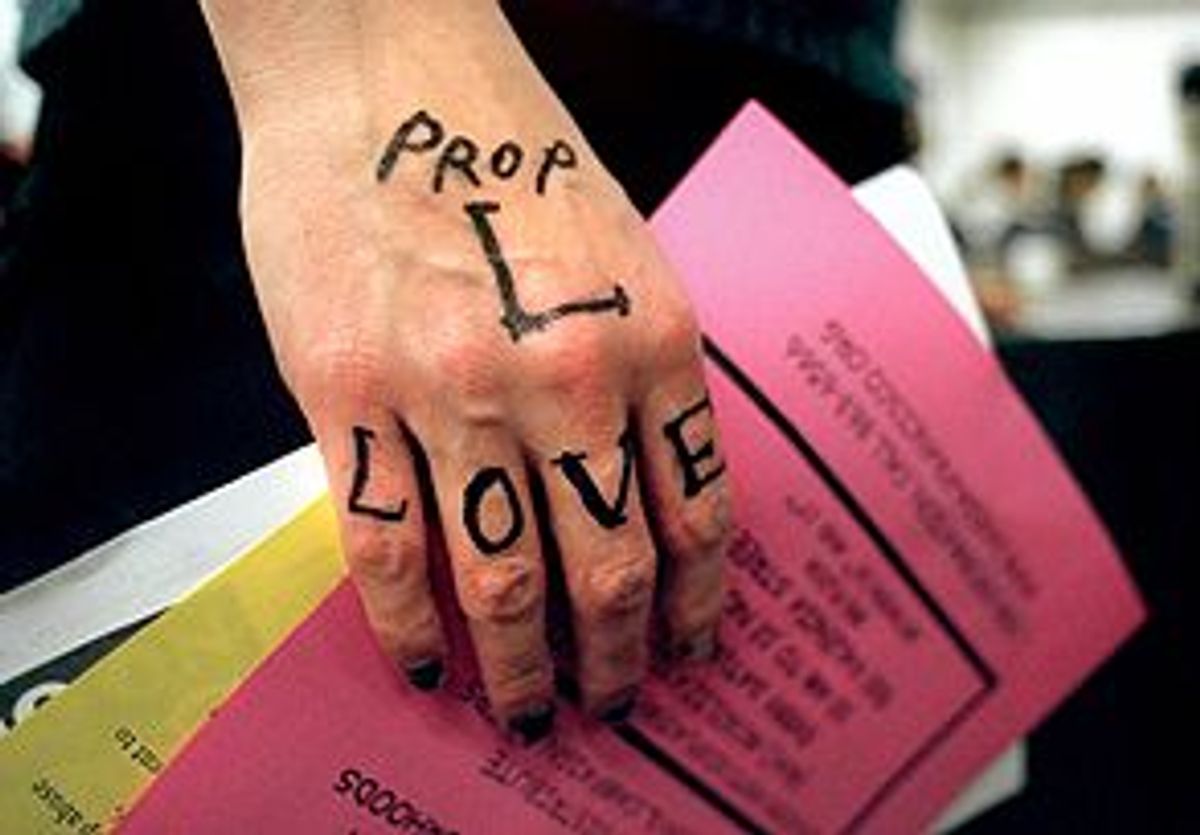 Most opponents of Proposition L, a San Francisco ballot initiative that would drastically curtail the development of new office space, declare that passage of the legislation would stab the city's Internet economy in the heart. The truth, I will argue, is the opposite. If the proposition is defeated the dot-com industry will be mortally wounded. I've made a good living from San Francisco's Internet economy, and hope to continue doing so. But the defeat of Proposition L would virtually guarantee that my industry will be force fed into oblivion.

If Prop. L fails, I can already see myself joining a high-tech diaspora from this city, displaced with my colleagues to cities where the new economy is just as vital, but where the rent is cheaper and the quality of life more comfortable. Some of these places may even have a worthwhile live music and arts scene. (I seem to remember moving to San Francisco for those very things, when those still existed -- but that seems like a long time ago.)

Meanwhile, developer lobbyists and city officials (with Mayor Willie Brown at the vanguard) have marshaled over two million dollars to defeat Proposition L next week.

The measure would curtail rampant office development in general, while prohibiting it altogether in districts like the Mission. With its promise to close off zoning loopholes which enable high-tech office projects to pretend they're "light industrial" concerns, developers and City Hall initiates do not like Prop. L, not one bit.

To the extent that my Internet peers are aware of Prop. L at all, they believe, paradoxically, that L is a measure aimed against them and their livelihoods. Indeed, Salon's Damien Cave calls Prop L an "anti-dot-com development" measure.

This misapprehension is no doubt fueled by anti-"dotcommie" rhetoric from some of the more ideologically extreme anti-gentrification activists, who comprise Prop L's core constituency.

But the only beneficiaries of L's defeat would be office building and "live/work" developers, who'd continue to gorge on business space at an exponential rate. In all this, it's disappointing to see Mayor Brown, an otherwise exemplary figure of Californian panache, devolve into someone more akin to "The Simpsons"' blustering Mayor Quimby. Mesmerized by the whirl of new technology, he seems hellbent on forfeiting his city to an industry with even less reliability than the Springfield monorail.

If Prop. L fails, hundreds of thousands of feet in office space will be shot into the city's production queue. These spaces will be occupied by tens of thousands of tech workers -- most of whom are not current residents of San Francisco. They will need a place to live, and the fight for housing on this tiny sliver of land, already savage, will break into outright class war, dragging all but the most extravagantly paid Internet employees into the melee. Rents will continue to skyrocket and those who can't afford the bill, like artists and musicians, will continue to flee the city.

A dot-com worker in the upper ranks of the tech pay scale -- say, $100K a year -- could seemingly cover any rent hike. But with spacious one-bedrooms in San Francisco going for $2,500 a month, how long will the prospect of burning a full third of that income to live in this city seem appealing? With vacancies scarcer and rents vaulting ever higher, the subsequent cost-of-living increases would be passed on to start-up CEOs and their venture backers, destabilizing their already tottering business plans. And their next inevitable question would become: "Ever thought of moving this company to Sacramento? Or hey, how about Tennessee?"

None of this is to say that Prop. L is perfect. An acquaintance who runs a Web-based design firm, for example, has community-minded ambitions for his Valencia Street lot, a space which would be equal parts office, art studio and practice area for local musicians. But Prop. L would shred those blueprints. The proposition sadly makes no distinction between smaller tech firms eager to integrate their company within the pre-existing neighborhood, and those who would thunder into Latino working-class districts like howling frat boys on a bender in Cabo.

Prop. L proponents are right to argue that L would keep high, or even increase, the already stratospheric rent for office space. But where excessive office development would merely give hi-tech businesses more room to hang themselves, constraining their rent options would force them to plan smarter, and stricter. Tech companies would learn to make do in smaller offices, stagger work schedules, outsource projects -- operate, that is to say, like they were hungry, mobile, risk-taking Internet start-ups, as opposed to cash-rich vanity operations with infinite space and resources.

Prop. L would be a much-needed addition to the Darwinian regimen imposed by the NASDAQ's initial hit earlier this year. That downturn forced Internet companies to ask themselves hard questions about their actual chances at profitability. A host of them had no ready answer, and the massive layoffs that followed were a welcome infusion of reality into the industry. A city-enforced scaling back would hit hardest, I warrant, at the dot-coms' least useful employees: the foul accretion of score-obsessed MBAs and hype groupies who've brought nothing significant to San Francisco or its digital economy. Nothing, that is, but nouveau-riche smarm and a string of failed start-ups abandoned in their khaki-assed wake.

Above all, Prop. L would create a solid incentive to finance nonprofit enterprises. One of its clauses reserves one-tenth of future office buildings to nonprofits, at one-third market rate. This would actually give San Franciscans their best chance to transform the city into a place resembling the Internet itself -- which is, after all, an interdependent weave of for-profit and nonprofit concerns. After all, the first victim of Internet-based gentrification was the Internet. It was originally conceived as a medium for education, research and civil service purposes -- and make no mistake, every act of e-commerce still depends on a long string of non-commercial efforts which made it possible in the first place.

The World Wide Web was initiated by a Swiss programmer's decision to make its programming language non-proprietary; its server architecture is supported daily by the reciprocity of open source programmers, who code primarily for creative satisfaction and the acclaim of their peers. And the new economy's latest revolutionary innovation was conceived by a college kid mostly interested in a way to freely trade music files on the Internet with friends.

Proposition L, with its development exemption for nonprofits, would allow philanthropic members of the tech industry to consider what would best use their resources to help restore San Francisco's waning night life and live music scene, or invest in noncommercial spaces for burgeoning artists.

The next new-economy breakthrough will not originate from a Net marketing flak whose chief pursuit is wheedling a last-minute reservation at the Slanted Door. Far more likely, it'll originate from a multimedia artist who learned Photoshop and Dreamweaver from an educational nonprofit, or from some other eclectic intersection of free spirits who finally have enough space from which to envision a better world. But days away from the Nov. 7 election, I fear the excess of anti-L campaign contributions will do their worst and scuttle this opportunity to match commerce to community in a way that indelibly strengthens both. As I walk home to my Mission apartment lately, I can't help noting that the newly constructed live-work lofts nearby are watched round the clock by security guards -- no doubt posted there to protect against night assaults of anti-gentrification graffiti and vandalism that hit these buildings on a weekly basis. With the amount of money and old-school chicanery gone into killing L, I fear that vandalism will finally escalate to a tipping point of rage.

But those protests or riots will be quelled, like they always are. The developers and lobbyists will finally have the city they always wanted: every block a future office park, every neighborhood an enclosed fortress of glass and metal. But even they will suffer the blow, when the NASDAQ's next inevitable downtown leaves them with empty buildings no one can afford to lease, in a city no one can afford to inhabit. And as the tech industry's cost-cutting exodus begins, the city's landlords will find themselves living in a ghost town that their own greed created.

Maybe that's when the artists and everyone else can move back. Should be quite a fire sale.