Two "Sopranos" actors and this unflinching story prove just how good indie movies can be. 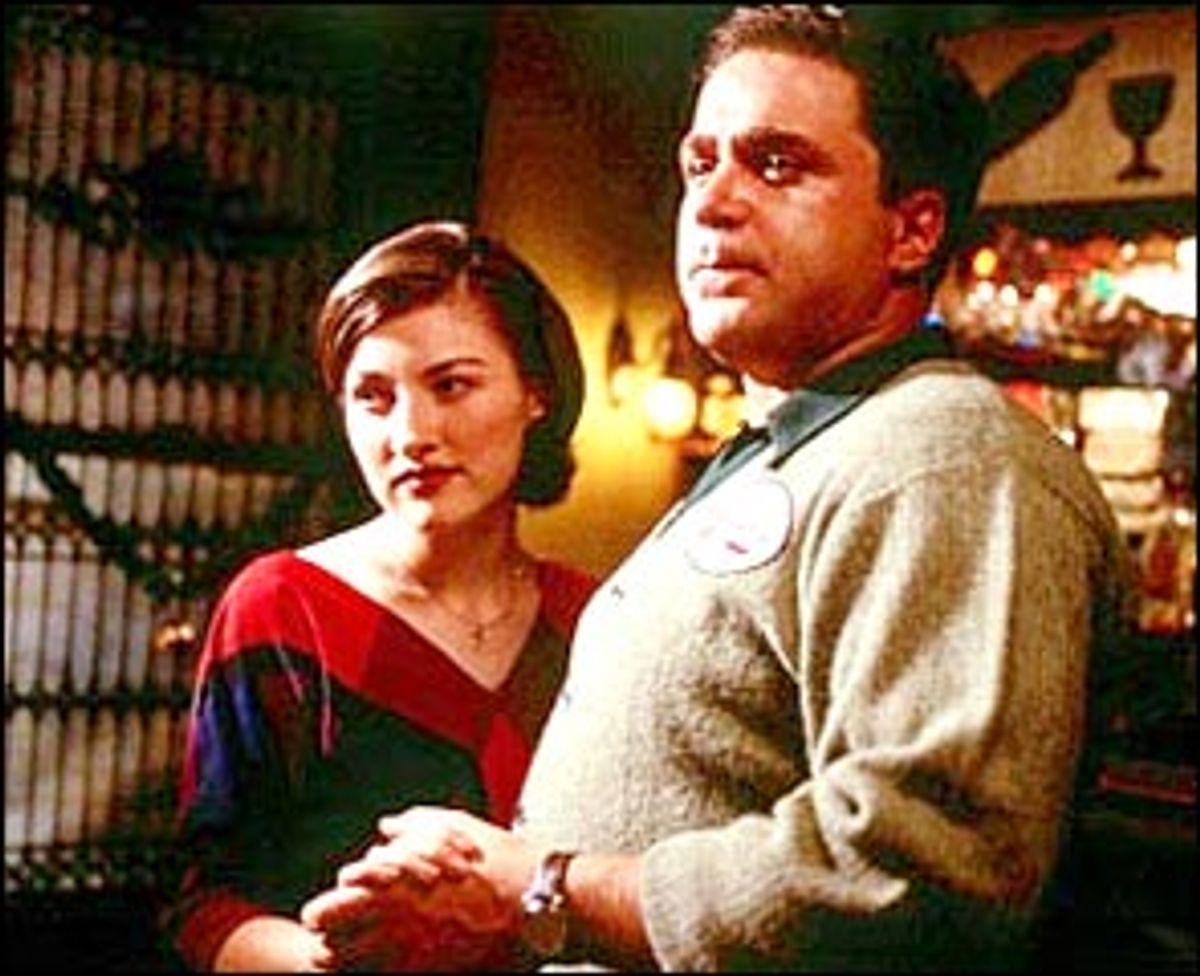 Like the baby whose unexpected appearance sets the story in motion, "Two Family House" is a sweet little surprise package. For such a modest movie, it takes its share of risks. With no flash or showmanship to fall back on, none of the empty energy that can sometimes put across even a mediocre movie, "Two Family House" stakes everything on the quality of its observations. The movie rises or falls on its ability to persuade us that a simple love story set in 1956 Staten Island is something entirely fresh. "Two Family House" is small, maybe even a bit thin, but it's a movie, not some Sundance Institute project taking up screen time before appearing on "American Playhouse." Raymond De Felitta, the writer-director, is like a stranger in a neighborhood bar who offers to tell you a story that he swears will be worth your time and then actually delivers on his promise.

Part of the pleasure of watching the film is realizing just how it differs from the familiar slice-of-life it appears to be. De Felitta's hero, Buddy Visalo (Michael Rispoli of "The Sopranos"), with his Fred Flintstone build and his contingent of saloon buddies, appears to be the sort of lovable working-class lug we've all seen before, a Ralph Kramden working the factory instead of the bus route. But there's more romance than bluster in Buddy. As Rispoli plays him -- which is beautifully -- the baby fat that still clings to Buddy might almost be emotional insulation. He moves a bit too slowly, talks a bit too softly, as if he were wearing his dreams like an aura. He holds those dreams close because none of them have ever come true.

Buddy has always wanted to be a singer. In a WWII talent show his crooning was good enough to get the attention of Arthur Godfrey, who told Buddy to give him a call when he got out. But Estelle (Katherine Narducci, also of "The Sopranos"), the hard-headed girl who waited for him, has no use for illusions. Without a trace of pity or shame, she tells her girlfriends that Buddy was born for failure the way some men are born for success. So when she and her mother insist that singing is no way to provide for a wife, Buddy caves in and heads to work in the factory. Eleven years later and a few ill-chosen ventures (taxi service, pizza delivery) along the way, Buddy is still working in the factories, and he and 'Stell are still sharing her old single bed in her parents' home, waiting every week for her parents to be distracted enough by Perry Como's half-hour show for them to have sex.

Buddy's latest venture is a crumbling house that he plans to renovate and open up a tavern on the first floor. The place is a dump, and for 'Stell, leaving the cocoon of her parents' home, a veritable prison. It doesn't look much better to Buddy's friends, who don't understand why he wants to leave his neighborhood to move to one where he'll have to serve Irish drunks. Buddy's immediate problem is O'Neary (Kevin Conway), the Irish drunk living upstairs in his new house, a scruffy freeloader just versed enough in the tenancy laws to know how he can manage to be months behind on his rent and not fear eviction.

On the morning that Buddy's pals show up ready to toss O'Neary into the gutter, his young, pregnant wife, Mary (Kelly Macdonald), goes into labor. They're all in for a shock when the baby boy she brings forth is black. O'Neary walks out the door and out of her life (out of the movie, too, a relief given Kevin Conway's customary overacting). 'Stell demands that Buddy evict Mary, but he finds he can't quite stomach the idea of abandoning this young mother. Secretly, he sets her up in her own little apartment.

Mary and Buddy are the sort of natural antagonists who, we can see immediately, are a love match. She's more hard-edged than Buddy, quick to look for the ulterior motive, the whiff of pity in every offer of help. Macdonald (she was the young girl who picked up Ewan McGregor at the dance club in "Trainspotting") doesn't sand Mary down to make her a forlorn Madonna. She's spiky and plainspoken and we come to like her even more because it's her bluntness rather than her charm that wins us over. She's practical, almost bitterly practical, planning to put her son up for adoption when her sister refuses to take in a black child.

But Mary is alive -- she doesn't expect the worst, as Estelle does -- and she hasn't resigned herself to nothing but compromise and disappointment. So the tenderness Buddy feels for her flows out of him as naturally as singing "I'm Confessing" with the radio. Rispoli's and Macdonald's performances complete each other as essentially as Buddy and Mary complete each other: She gives him gumption, and he gives her moonlight. The movie is narrated by Mary's child (speaking as an adult), and some of the most inspired moments are grainy sequences meant to replicate the infant's point of view. In one, the infant lounges in his makeshift crib as Buddy sings to Mary, looking for all the world like somebody relaxing to Sinatra. These scenes approach what Joanna Scott accomplished this year in her novel "Make Believe" in the scenes written from the point of view of an orphaned 3-year-old. They're improbable memories, concrete and dreamlike at the same time.

The subject of "Two Family House" may be the familiar one of leaving everything one knows to start a new life. The comedy of the movie is that this quest takes place in a world so circumscribed that a new world is a few blocks from where you've lived since you were born. De Felitta's greatest talent is to make coherence out of people's contradictions. Estelle, for instance, is worthy of both our scorn and our pity, often at the same time. She's as unsupportive as a spouse can be, and yet you see the deep-seated conventionality that makes her lust for the predictable, the only lust in her.

De Felitta's introduction of race into the mix of the story undermines any potential nostalgic coziness, but it doesn't alienate us from the characters, or the milieu either. Estelle is gutsy enough to take charge and deliver Mary's baby when the men are standing around like lumps, and yet calls the young mother a "nigger lover" behind her back. And each choice seems perfectly natural. (An uncle of mine once saved the life of a black boy after a traffic accident in which the child was pinned under a mailbox. I have a photo of him holding the child lovingly in his arms as he was rewarded for bravery. Yet he routinely disparaged black people throughout his life. Still, I can remember him cooing over my black second cousin when she was an infant.)

The characters in "Two Family House" don't lose their humanity when they make racist jokes or remarks (as they would in a Spike Lee movie -- that is, if his white characters were allowed any humanity to begin with). De Felitta shows how their racism comes out of fear, not rottenness. This is one of the rare movies sophisticated enough to understand that everyday racists willingly victimize themselves by surrendering to their ignorance. And that's crucial to Buddy's pulling away from them and from everything he's ever known. That change isn't any less cataclysmic for Buddy because it's simply a matter of moving to another neighborhood. And he's a hero because he's willing to make such a drastic change. By the finish, "Two Family House" has taken on an immense subject: the changing racial faces of urban neighborhoods and the question of who belongs and who doesn't.

"Two Family House" seems to me the epitome of the small, character-driven film that the indie movement was supposed to champion before it became a hip mirror of the Hollywood star system. And that's a pity because it's one of those movies that is completely accessible to a wide audience (as well as emotionally satisfying) and yet really has some meat on its bones. In terms of the state of the indie scene, "Two Family House" is like that black baby -- the unexpected new kid on the block struggling for acceptance. It represents a hope for changing what has become an increasingly predictable neighborhood.